Typically executed without fanfare and not to be discussed publicly, the contract extension signed by Katie Shields in 2021 was given rare status by St. Louis University.

Her contract extension was followed by a news release — acknowledgment that SLU’s women’s soccer coach had been given a long-term deal after the team reached the national rankings and NCAA Tournament in the spring.

Shields’ profile was on the rise as the leader of what has become the strongest athletics program at the university. She was likely about to be courted by other schools, if she wasn’t already.

“That was about recruiting,” she said. “We very much want recruits to know we’re committed to being here. It’s a question we get a lot from recruits, and we want to be honest. People have tried to use that against us. The longer we’re here and the more success we have, it’s not used as often. It’s a destination, not a stepping stone.”

Coaches in any sport with the résumé Shields has built at SLU would be the target of programs at power conference schools. She smiles and hesitates when asked if she’s been contacted about other jobs.

The only ladder she’s interested in climbing is the one that takes the Billikens, who are ranked No. 10 in the country this week by the United Soccer Coaches, higher on the national scale. SLU faces Loyola-Chicago at home Thursday night.

She gave athletics director Chris May every reason to want to invest in the prolonged pattern of growth, although the exact length of the agreement remains a mystery.

“We have a mutual long, long-term commitment to each other,” May said. “She’s going to be here many, many years.”

Women’s soccer is one of the top-drawing programs at SLU and was 16th in the country in attendance last fall. This year, the women have drawn the two largest crowds to Hermann Stadium with the goal of being top 10 in the nation in attendance.

Shields has stacked recruiting classes to achieve a level and depth of talent not seen before in the program. The coaching staff is focused on continually upgrading the schedule to include nationally prominent programs.

As good as the Billikens have looked this season, Shields potentially could have all but one starter return in 2023. According to reports, the team has 10 commitments from the high school class of 2023 and is working on 2024, with recruits beginning to decide.

“It’s not like every class is better than the last, but I do think over four-year chunks, we’ve been able to elevate the talent,” Shields said. “We’re very specific about what works in our program and the type of player profile. We’re good at spotting players on the way up trajectory-wise.”

The Harvard grad from the California coast has teamed since 2016 with associate head coach Chris Allen to focus on internal culture, personal growth — players must read the book “Legacy” every offseason — and offbeat team-bonding experiences spearheaded by Allen.

It’s an environment that has helped convince numerous players to stay on board for their sixth year of eligibility, which was made possible by COVID. Some already have indicated an intent to play a sixth year in 2023.

“There aren’t a lot of programs out there that are like this,” sixth-year defender Brionna Halverson said. “We talk about things like our mission, our goals, climbing the mountain and we put those into action. I feel the leadership Katie has demonstrated through the years makes me love being in this kind of environment.”

Shields became head coach in 2013 after working at SLU as an assistant. She indicated that the resources available to her now are a massive leap over what she inherited.

There have been structural improvements such as a new artificial turf warmup area, resurfaced practice and playing fields and a new locker room and training facility inside Hermann Stadium.

She also has seen an increased financial commitment for assistant coaches and herself, the addition of a director of operations, more beneficial travel, improved nutrition for players and other things the public doesn’t see.

“The change is night and day,” she said. “You could argue it’s a chicken-and-egg thing. They’ve believed in us, and they’ve invested. The men’s success only helps us resource-wise also because we share a lot. It’s unrecognizable.”

The Billikens have gradually moved up the mountain that Shields talks about regularly. The past two seasons, they were among the final 32 teams in the NCAA Tournament. They are beginning to receive regular attention in the rankings.

They survived a challenging 2021 season that saw an abundance of significant injuries to key players and an early season mass suspension to emerge stronger than ever. They have wins over No. 14 Arkansas, defending Big East regular-season champ Xavier and Nebraska, with the only loss coming against No. 6 Notre Dame.

“I think we got the schedule right this year in a lot of ways,” Shields said. “We’re methodical in how we pick opponents. ... We always want a couple of conference championship contenders. We’re hoping to get some teams that played in the College Cup, so we see a high level and aren’t shocked by it when we do see it in November.”

The Billikens have been knocked out of the tournament by some high-end programs in recent years, including Notre Dame, Washington and Rutgers.

As with the men’s soccer program, the goal at SLU is a national championship.

“Women’s soccer is critically important to us. It’s every bit as important as the men’s program,” May said. “Katie is a hot commodity, and we knew she was a brilliant coach when we hired her. We support that program across the board.”

SLU women open with win over No. 8 Arkansas

Emily Puricelli was prepared to commit as a high school sophomore until the email came from St. Louis Billikens women's soccer program.

Inside Pitch: These factors could swing wild-card series between Cardinals and Phillies 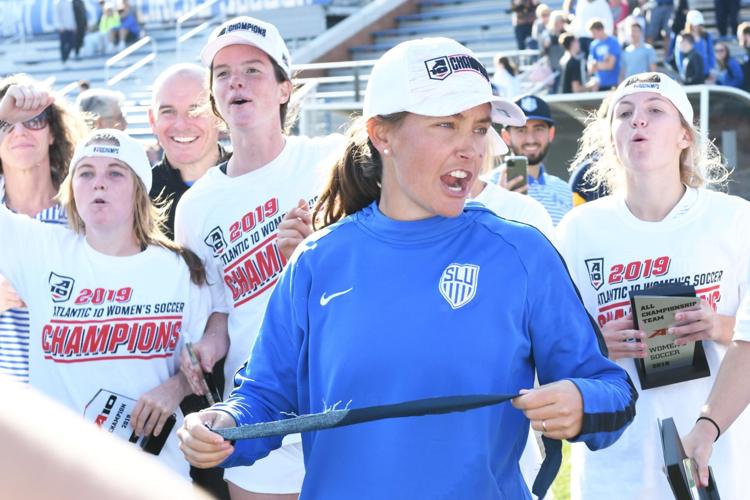 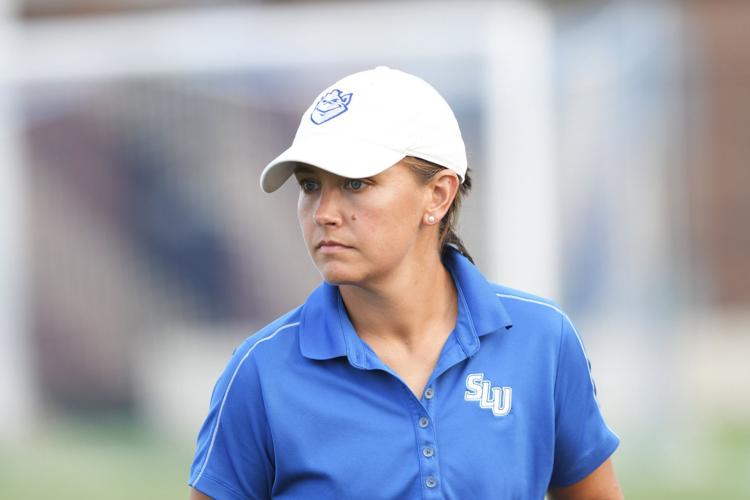 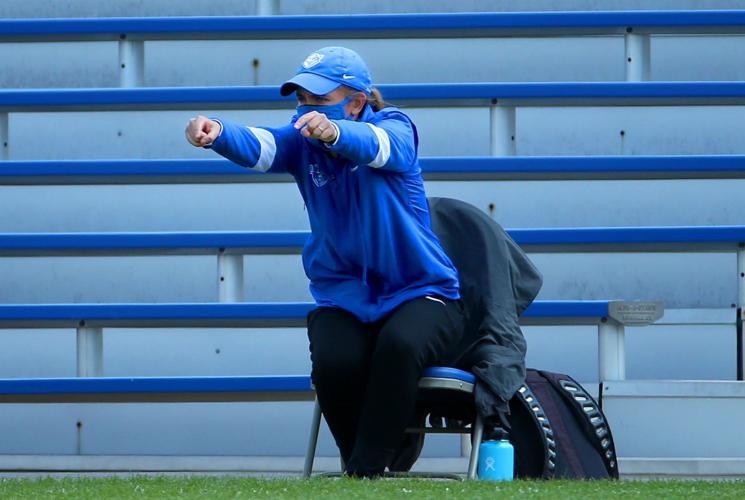 St. Louis University women's soccer coach Katie Shields signals from the sideline during first-half action on Thursday, April 15, 2021, in the semi-final game against the Dayton Flyers in the 2021 Atlantic10 women's soccer championship tournament at Robert R. Hermann Stadium in St. Louis, Mo. The No. 1 Billikens beat the Flyers 3-0. Photo by Christian Gooden, cgooden@post-dispatch.com 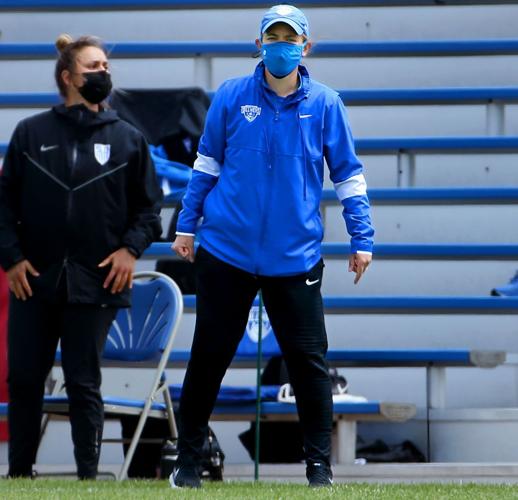 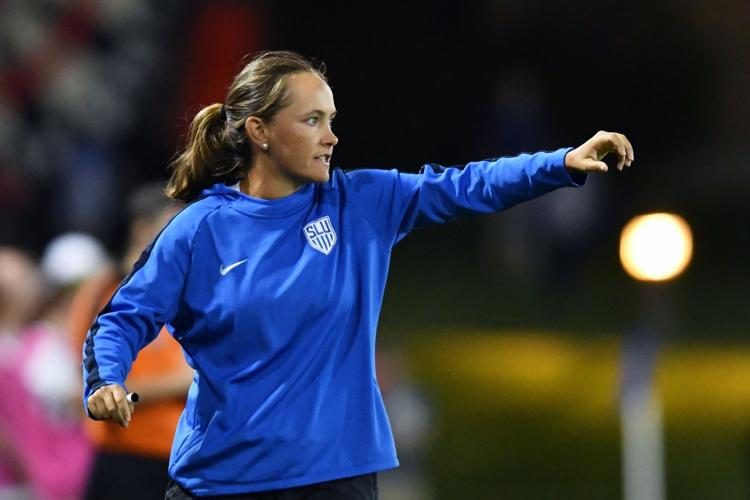