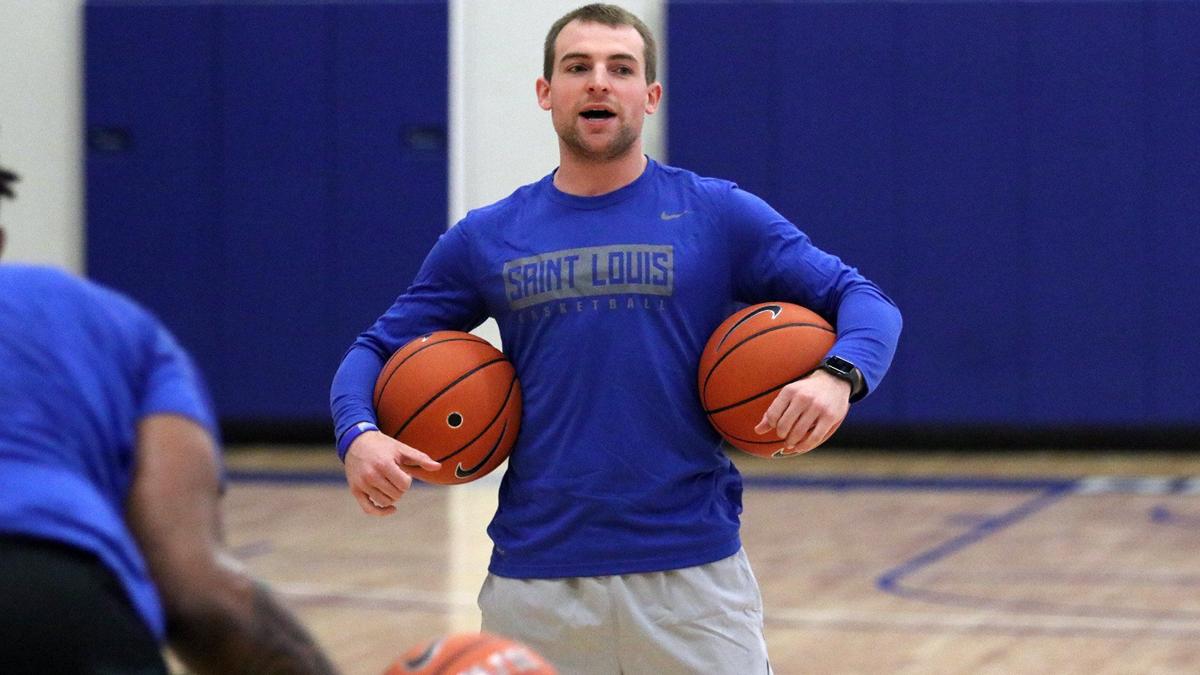 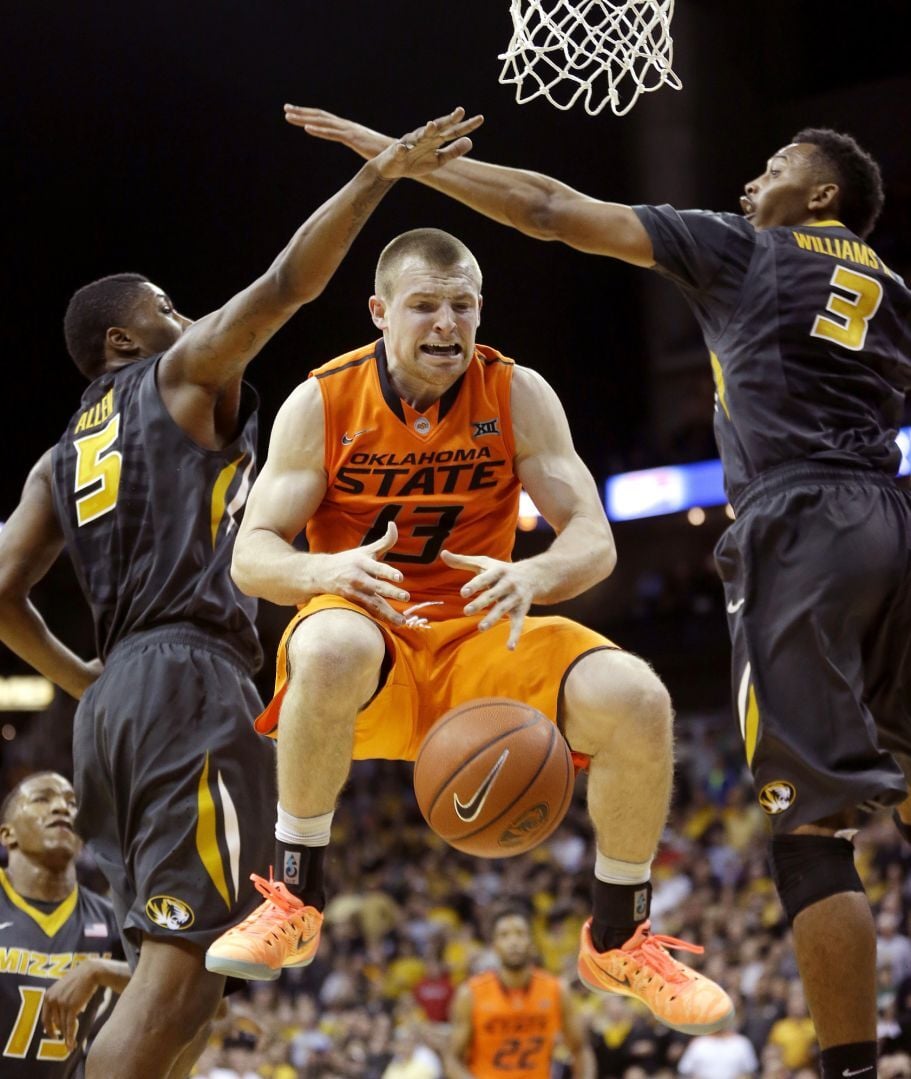 Oklahoma State's Phil Forte III (13) tries to gain control of the ball after having it knocked loose by Missouri's D'Angelo Allen (5) and Johnathan Williams III (3) during the second half of an NCAA college basketball game Tuesday, Dec. 30, 2014, in Kansas City, Mo. Oklahoma State won 74-72 in overtime. (AP Photo/Charlie Riedel) 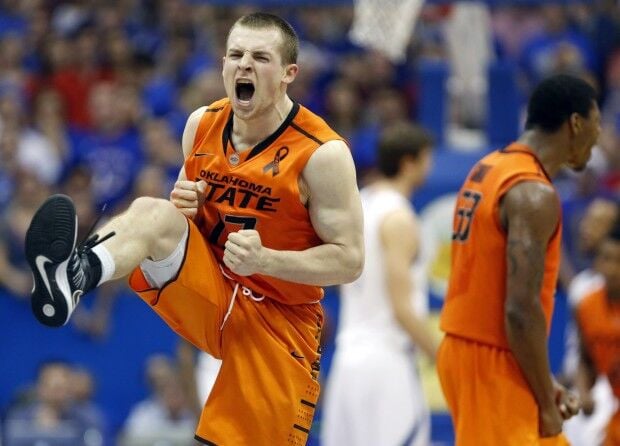 After an 18-hour drive from Edinburg, Texas, Phil Forte pulled into the parking lot at Chaifetz Arena for his first day of work Tuesday morning and prepared himself to enter the building where he said goodbye to his best friend last month.

The last time he was in St. Louis, Forte spoke at the memorial service of former St. Louis University assistant coach Ford Stuen, who had been his teammate and roommate at Oklahoma State.

Now, he was going to officially step into Stuen’s role, walk into his office, coach his players.

“I got goose bumps and chills coming back,” Forte said. “It didn’t hit me until I got back here, in Chaifetz and in the gym for workouts and being around the office. It’s a wave of different emotions but a lot of excitement.”

Forte was hired as SLU’s third assistant coach and got started by helping with individual workouts on the players’ first day back. This weekend, he’ll go on his first recruiting trip.

The past five weeks have been an emotional ride for the 28-year-old. While keeping track of Stuen’s status from Texas, he accepted a job at the University of Texas-Rio Grand Valley. Days later, he learned of Stuen’s death and traveled to attend his service at Chaifetz.

Then he heard from SLU coach Travis Ford last week, and they began discussing the possibility of Forte returning to the program, where he was a graduate assistant for two seasons.

“I told him there was a wave of emotion,” Forte said. “I talked to some others and they asked, ‘What do you think Ford would want you to do?’ When I talked to Coach, he said, ‘I can tell you right now what he would want.’ There are a lot of positives about the job in terms of basketball, but it was bigger than basketball.”

Travis Ford recruited Forte to Oklahoma State, where the 5-foot-11 guard became an All-Big 12 player. Forte joined the SLU staff in Ford’s second season and spent two years as a grad assistant while Stuen was working as director of player development.

He left for an assistant coaching job at Sam Houston State, where he was on the staff for two seasons. After spending five years in Ford’s system at two schools and two years as an assistant, Forte had what Travis Ford wanted.

“Ford and I talked a lot the last couple of years about bringing Phil back eventually,” Travis Ford said. “I took some time after Ford’s passing and didn’t really want to think about it. Then I started writing things down, and everything kept coming back to (Forte) being the right person. I have admired his work ethic and understanding of the game, and he’s an incredible mentor for these young men.”

Forte started his job at UTRGV in early May. The announcement of his hire came on May 10, one day before Stuen’s death.

The two met at Oklahoma State and became roommates. They became inseparable, and when Stuen graduated a year before Forte, he created a scrapbook of photos as a gift. He included a letter, which Forte read at the memorial service.

They were reunited at SLU in 2017. They shared an apartment, and when Stuen moved in with his soon-to-be wife, Courtney, Forte moved into their basement for five months before securing a new job.

“Coach (Ford) and I talked the last month but never about the job,” Forte said. “I had told him before that wherever I was, I would walk from that school to work for him again because that’s the relationship me and him have. He gave me a chance to play in the Big 12 when no one did, and he believed in me when not many did.”

Coaches at SLU are now wearing blue wristbands inscribed with the phrase “The journey is the reward,” which is something Stuen was known to say and include in hand-written notes he sent to people.

Forte is now part of that group, and it’s a responsibility he doesn’t take lightly. Besides his work as a coach, he wants to be present for Stuen’s family, replicate his enthusiasm for the program and make sure his friend is not forgotten while forging his own career.

“I know there are going to be times that are tough because we have a lot of memories here together,” Forte said. “I’m going to fill his shoes the best I can.”

Oklahoma State's Phil Forte III (13) tries to gain control of the ball after having it knocked loose by Missouri's D'Angelo Allen (5) and Johnathan Williams III (3) during the second half of an NCAA college basketball game Tuesday, Dec. 30, 2014, in Kansas City, Mo. Oklahoma State won 74-72 in overtime. (AP Photo/Charlie Riedel)