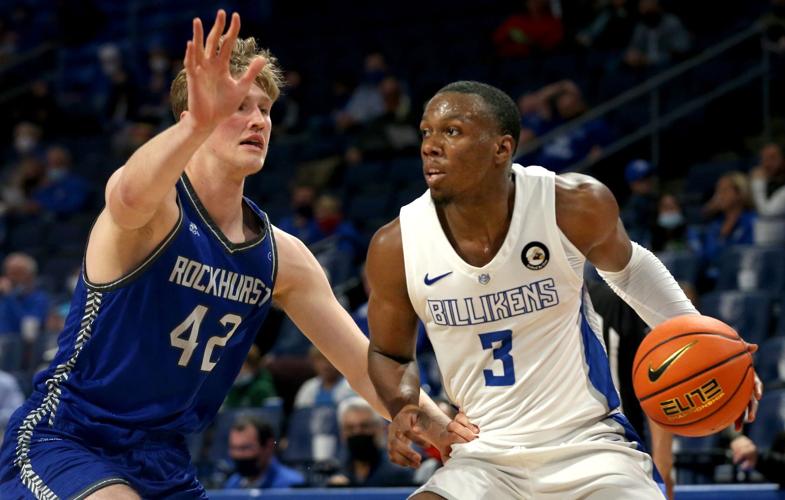 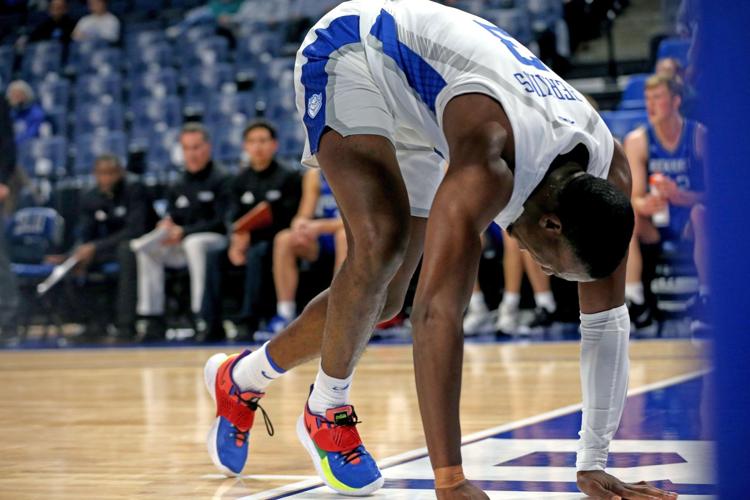 St. Louis University's Javonte Perkins falls to the floor after suffering what was a season-ending knee injury in an exhibition game against Rockhurst on Tuesday, Oct. 26, 2021, at Chaifetz Arena in St. Louis.

There no longer are obvious outward signs that Javonte Perkins is recovering from a torn anterior cruciate ligament unless you count the sleeve he wears on his left knee during workouts.

But that has nothing to do with protecting the knee after eight months of rehabilitation.

“I wear this to cover my scar,” he said, “because sometimes when it itches I lean down to rub it.”

Perkins has returned to the court for SLU’s limited summer workouts as he progresses toward a full clearance for all practice activities before the team’s European tour in August.

He still does not participate in anything that involves head-to-head competition, such as five-on-five or one-on-one drills. But he has participated in all other aspects of team and individual workouts without problems.

There is no rush although Perkins does have his sights on playing in games in Spain and Italy, where the Billikens will be from Aug. 12-21.

“Before we go on the trip I should be doing all of that,” he said. “I’m expecting to be doing everything (in Europe) — not at a high clip but I’m expected to do everything. I expect to play. I know I can’t play 40 minutes, but it’s a process.”

The 6-foot-6 wing player has been at SLU for three years but has yet to experience a season in which he was a major contributor from the first game to the last.

He needed six weeks to become a consistent double-figure scorer his first season before COVID cut the schedule short. His second season again was shortened by COVID. Last year he was injured in the team’s first exhibition game.

The prospect of having Perkins, who has averaged 15.9 points at SLU, healthy for the entirety of a season still is possible after he opted to return for his sixth year of college. He started with two at Southeastern Illinois College.

This injury forced his longest layoff from playing basketball. The days of constant rehab largely are over, leaving Perkins to focus on strengthening and maintenance.

“It gets sore some days,” he said. “If I do a workout and practice later, it will get sore, but I’m getting used to it now. It will ease as time goes on.”

The return of Perkins along with Yuri Collins and the remaining cast has prompted a flurry of national attention surrounding the 2022-23 Billikens.

Coach Travis Ford wants to make sure the team is fully prepared, thus the tour of Europe that will include three games. Along with that trip, SLU is allowed 10 extra practices.

Perkins will be among the players considered in preseason voting for Atlantic 10 Conference honors, including player of the year. But there are obstacles to overcome between now and the start of the season in November.

“Getting in shape,” Perkins said about the toughest part of his comeback. “You get tired so fast after being out. And there’s the strength part of it in your legs. You have to get it all back. I haven’t really played against anybody to see where I’m at. But I’m pretty sure I’m not too far behind.”

Perkins actually lost weight in the weeks following his injury and surgery. He is working on rebuilding in the weight room and plans to play at around 205 pounds.

This isn’t the path Perkins envisioned. He will turn 24 in August, making him the old-timer on the roster.

“I never would have thought I’d do it again,” he said of using the sixth year. “But I’m just happy to be back on the court again.”

SLU women's soccer loaded with experience while men are reloading

While the women will have an overflow of starters from which to choose, all but two starters are gone from the men's team.

The Billikens leave for a 10-day tour of Europe on Aug. 12 with six newcomers and six players who know each other well.

St. Louis University's Javonte Perkins falls to the floor after suffering what was a season-ending knee injury in an exhibition game against Rockhurst on Tuesday, Oct. 26, 2021, at Chaifetz Arena in St. Louis.