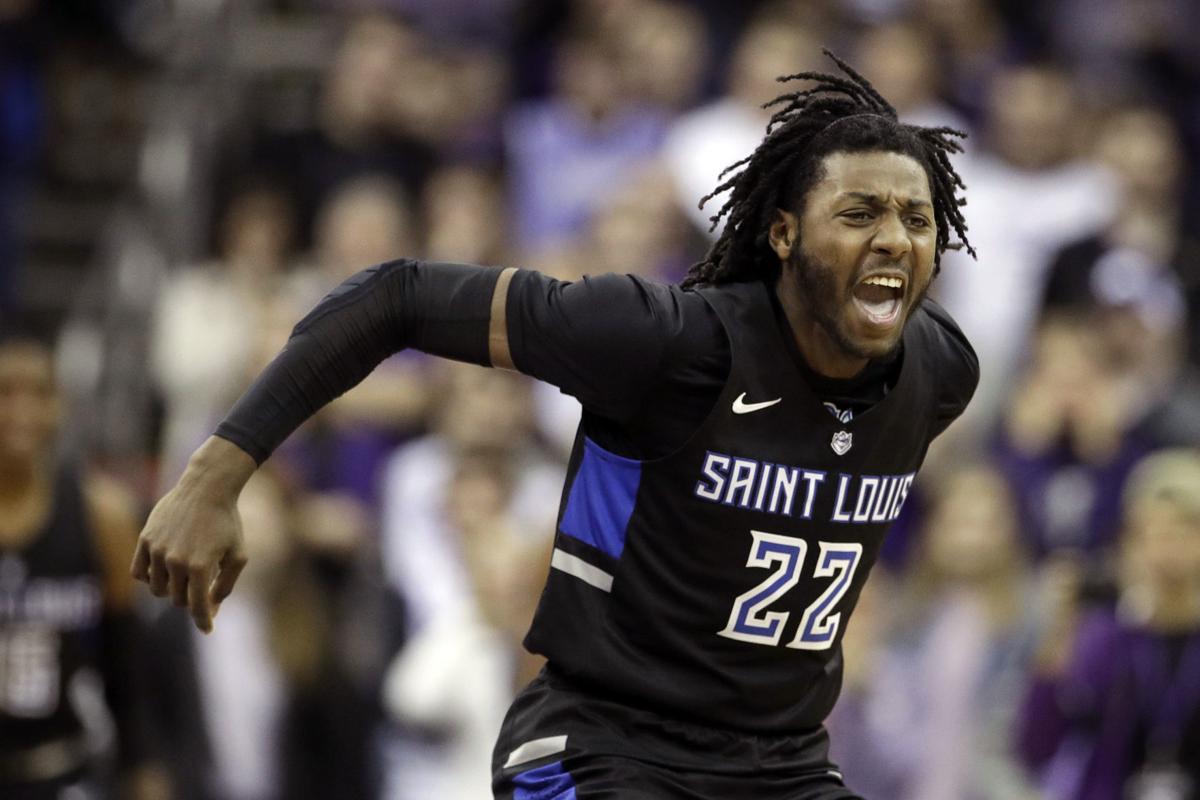 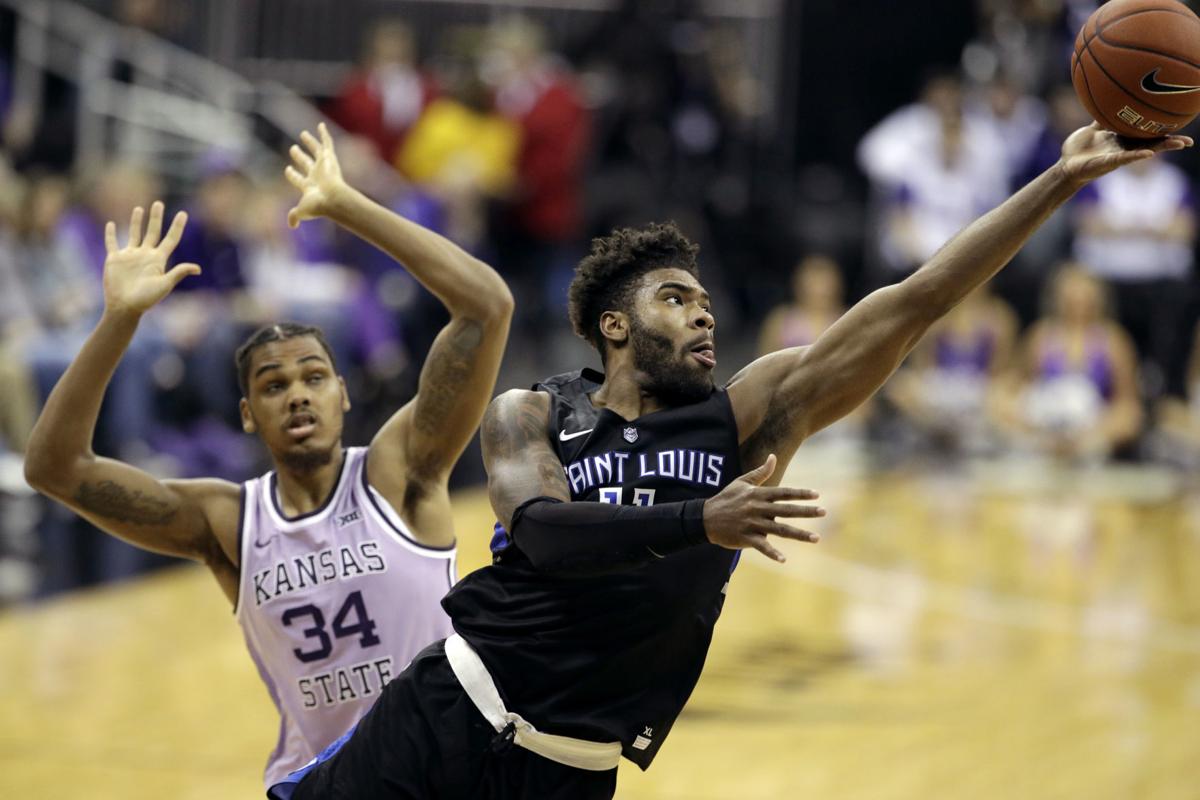 Saint Louis' Hasahn French, right, gets past Kansas State's Levi Stockard III (34) to put up a shot during the second half of an NCAA college basketball game Saturday, Dec. 21, 2019, in Kansas City, Mo. (AP Photo/Charlie Riedel)

KANSAS CITY — There was not an easy path to the basket for Hasahn French on Saturday night. And Jordan Goodwin could not get the rebounds he typically grabs.

The stars were not out at Sprint Center, but coach Travis Ford’s role players filled in more than admirably for St. Louis University as the Billikens held on for a 66-63 win over Kansas State.

Terrence Hargrove Jr. had a big first half, then gave way to Javonte Perkins in the second before Yuri Collins sealed the deal with a series of plays down the stretch that solidified SLU’s best team win of the season.

“This team can hurt you in tons of ways,” Goodwin said. “We come at you in waves. With the type of team we’ve got, you never know whose night it is. Coach Ford has confidence in all of us and is trying to build other guys’ confidence to the level of me and ‘Has.’”

SLU (10-2) built an early 11-point lead that disappeared by halftime, and neither team had more than a four-point lead in the second half when there were nine lead changes and seven ties.

Six SLU players scored from seven and 12 points, with Perkins leading the way after seeing sparse minutes in the first half.

Collins came up big down the stretch with an assist to give SLU a 63-61 lead, a layup to put the Bills back ahead 65-53, a steal and then a free throw to cap the scoring.

“This game was played the way we thought it would be played,” Ford said. “It took a 40-minute effort. That’s a physical, hard-nosed, grind-it-out game in a hostile environment. When we walked out for the game, I thought ‘That’s a big-time crowd.’”

Although played off campus, it was a home game for Kansas State (6-5) in front of a crowd of 11,625. And it came on a night when SLU was adjusting to life without a key player.

It was announced before the game that freshman guard Gibson Jimerson will be out for the season with a broken foot that he suffered in practice early last week. He underwent surgery Friday and then returned to his home in Richmond, Va.

However, French did return after missing one game with a sore hip. Kansas State was ready for him, collapsing to double-team and sometimes swarm him with three defenders. The result was a three-for-10 shooting performance.

Goodwin saw his streak of six double-doubles come to an end with 11 points and six rebounds. But Collins was there to fill the gap with some huge plays, including four steals and good defense on Kansas State point guard Cartier Diarra. He was at his best in the final minutes.

“Coach Ford always tells me I’m the best point guard on the court and I control the game,” Collins said. “So, during that little moment, I felt if the ball was in my hands I had to make sure we got the right shot, and everything went well in order for us to win the game.”

The Wildcats had the final possession with a chance to tie, but Xavier Sneed (Hazelwood Central) missed a 3-pointer and the loose ball was batted around long enough for time to expire. Levi Stockard III (Vashon) scored a game-high and career-high 17 points for the Wildcats.

As they did at Auburn, the Billikens scored the first nine points of the game and then extended the lead to 18-7. But it disappeared in a flurry of 11 first-half turnovers that were all the more frustrating as SLU shot 57 percent in the half.

The tables turned in the second half as Kansas State lost the ball 13 times while shooting 53 percent. But the Wildcats cooled off from the 3-point arc after hitting five in the first 20 minutes.

Tay Weaver helped make up for Jimerson’s absence by making three of four 3-pointers, including a big one from the corner with 4 minutes left to give the Billikens a lead they didn’t lose.

“Just look at the bench scoring,” Ford said. “Our bench really picked it up and gave us a lift.”

SLU has a week off before finishing nonconference play at home against Bethune-Cookman as the Billikens move forward without Jimerson, who was the team’s third-leading scorer.

“We knew Gibson’s diagnosis wasn’t looking too good,” Ford said. “Other guys have to step up. (Hargrove) had a terrific first half. That’s the way this team is built. All of a sudden Javonte hit a 3, a pull-up and got to the line. Everyone is happy. We were just trying to figure out how to get a win.”

Ford unhappy after SLU loss, says 'I'll do something about it'

Poor start is costly in 71-59 defeat at Davidson. Billikens coach complains about 'mentality' of his players and uneven officiating.

Have Billikens recovered from Dayton defeat? They'll find out at Davidson

Players say they're over tough loss against Dayton last Friday.

Javonte Perkins emerges as SLU's most versatile and dangerous scorer

The 6-foot-6 swingman is SLU’s leading scorer since the start of the Atlantic 10 schedule.

Javonte Perkins emerges as SLU's most versatile and dangerous scorer

The 6-foot-6 swingman is SLU’s leading scorer since the start of the Atlantic 10 schedule.

Goodwin has 17 points and 13 rebounds for the Billikens.

No. 13 Dayton sinks SLU on last-second 3 in overtime

Sellout crowd was on the verge of Chaifetz Arena’s biggest celebration in six years.

Have Billikens recovered from Dayton defeat? They'll find out at Davidson

Players say they're over tough loss against Dayton last Friday.

Thatch learned this week he is suffering from a form of myalgia or an isolated myopathy, both of which affect muscles.

Bell growing into his role as freshman at SLU

Slimmed-down big man had his best game of the season Saturday in win over Richmond.

Saint Louis' Hasahn French, right, gets past Kansas State's Levi Stockard III (34) to put up a shot during the second half of an NCAA college basketball game Saturday, Dec. 21, 2019, in Kansas City, Mo. (AP Photo/Charlie Riedel)