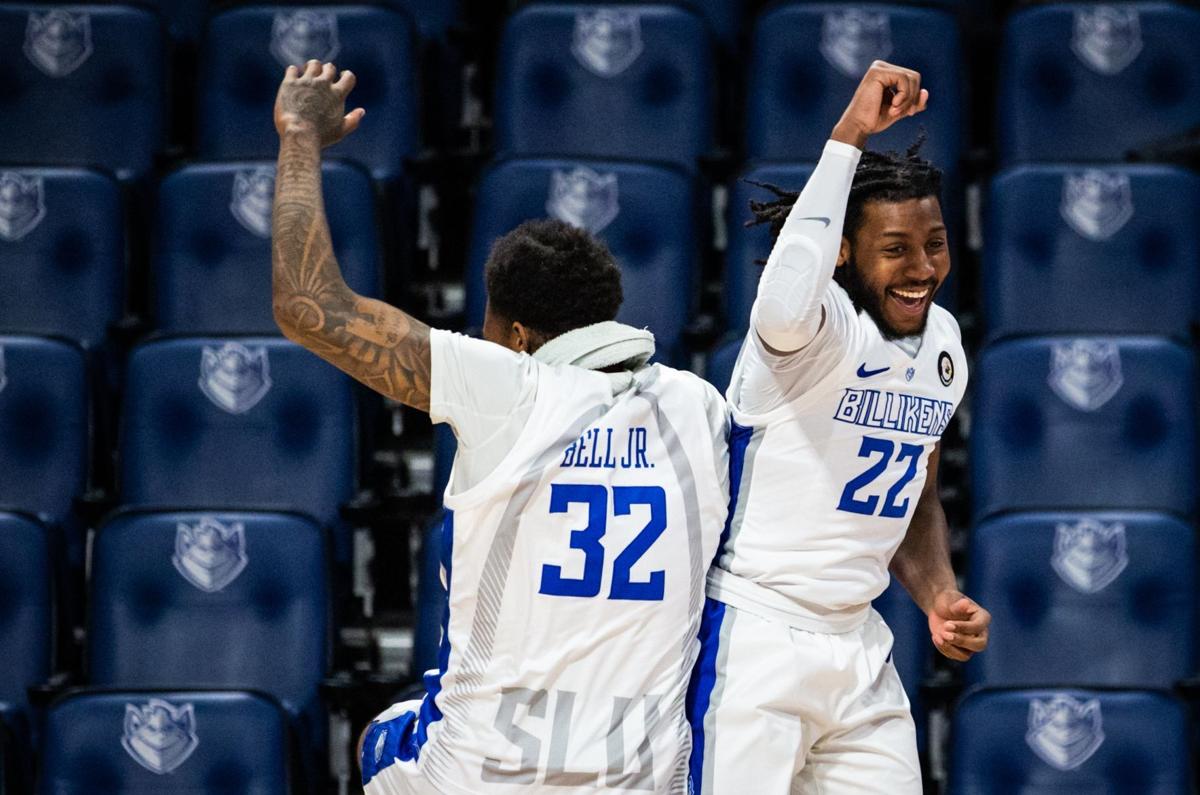 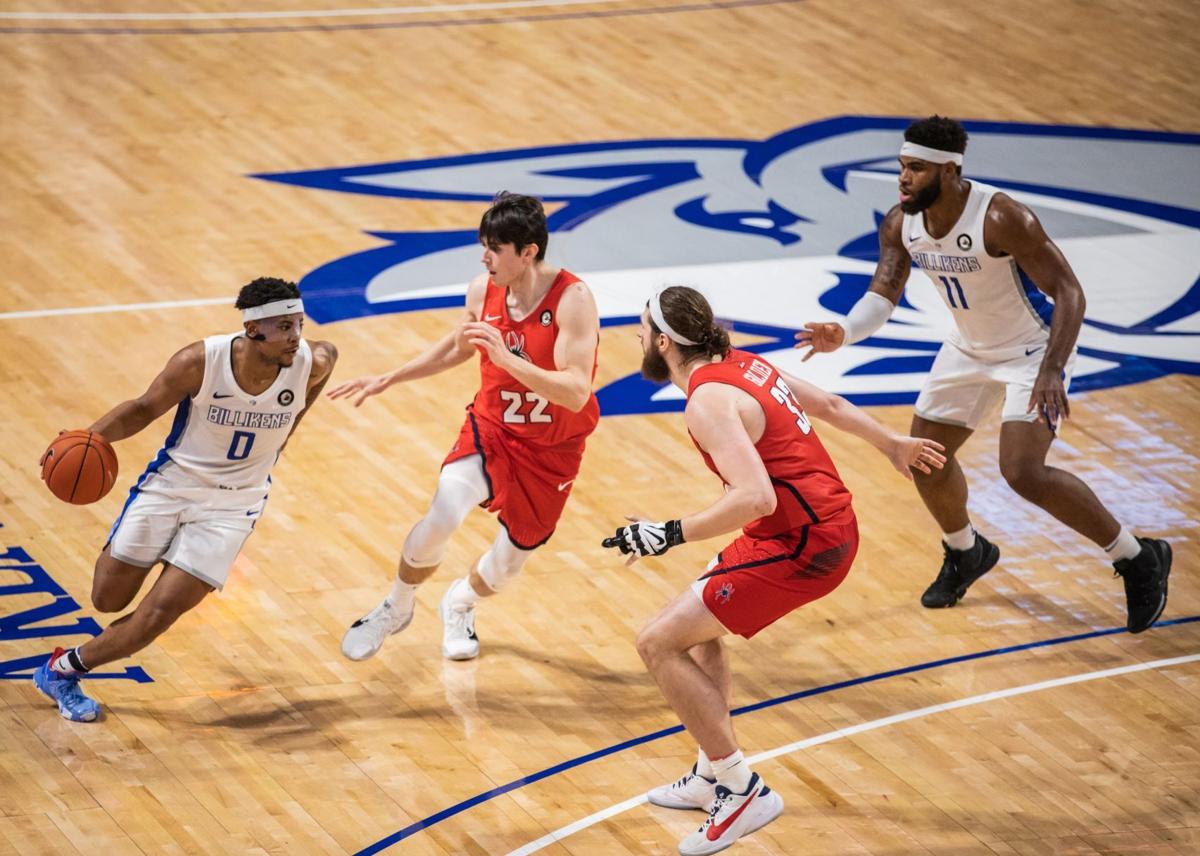 Saint Louis University guard Jordan Goodwin (0) brings the ball down for his team during the second half of the Billikens' game against the University of Richmond at Chaifetz Arena in St. Louis on Feb. 26, 2021. The Billikens beat the Spiders 72-67. Photo by Sara Diggins, sdiggins@post-dispatch.com

Fred Thatch Jr. made a proclamation on the bench during a late timeout Friday night, and it wasn’t the type expected from a player who had made one 3-pointer all season.

“I told my roommate, ‘I’m about to hit a dagger,’” Thatch revealed after SLU finished a 72-67 win over Richmond at Chaifetz Arena.

The dagger came in the form of 3-pointer from the corner with SLU clinging to a one-point lead with three minutes remaining in a desperation game for both teams. It was the boost SLU needed to finish off Richmond.

Coach Travis Ford said he had been “point-blank blunt” with his players after two road losses had the Billikens on the outside looking in among most NCAA Tournament prognosticators.

Richmond, which was picked to win the Atlantic 10, was in the same situation and didn’t back down from SLU’s initial punch, taking the lead several times but by no more than one point.

Ford couldn’t deny that the Billikens were playing with a heightened degree of intensity, maybe desperation.

“I don’t think that’s a bad feeling,” he said. “We knew where we were. I don’t now if desperate is the right word, but it might be. Both teams need to win games, but our guys played with a little more sense of urgency than they had been. We improved in some areas we’ve been looking for.”

After Hasahn French and Javonte Perkins each scored 15 points, it was Thatch and reserve forward Marten Linssen who provided all of the field goals down the stretch to beat a senior-laden Richmond (6-4, 13-6) team.

Thatch added a layup on a nice pass from Yuri Collins after his 3-pointer. And Linssen scored three times in the final six minutes to finish a 4-for-4 shooting game.

“We knew how important this game was, not only because we needed to win but mentally we needed it as a team to know we’re still one of the best teams in the country when we come to play,” Thatch said. “I feel our team has been a little soft offensively and defensively. We haven’t been playing how we should be.”

SLU sought to rectify that situation early. French steamrolled the Richmond defense for four quick buckets. The Billikens built on that physical play by outrebounding Richmond 41-21, scoring 36 points in the paint and powering to 11 second-chance points.

“That’s in our core,” French said of the physical play. “It’s something we talked about that we should be doing. I think that’s the type of team we have to keep being no matter who we’re playing.”

Richmond erased SLU’s deficit and took the lead with a huge boost from its 3-point shooting. The Spiders made their first six attempts in the second half and finished 10 for 20.

But the biggest 3 came from Thatch, who entered the game having made one of 11. But he insists he called it.

“That’s why everybody got so excited,” he said, “because I just said it.”

SLU and Richmond were scheduled to play twice but ended up playing one time during the regular season because the first meeting was canceled when SLU’s medical team expressed concerns about Richmond’s COVID protocols.

SLU came out intent on making a statement it seemed with French being the focal point.

The Billikens went to the 6-foot-6 senior on every possession to start the game. French made it clear that he was focused on attacking and made his first four shots in little more than three minutes to give SLU an 8-2 lead.

Things became more difficult for French from that point as shots stopped falling, and the Billikens needed others to produce. That moment came during a 13-0 SLU run when Perkins had two 3-pointers and Terrence Hargrove Jr. one in about 90 seconds as the Billikens extended their lead to 13.

“‘Has’ had a heck of a game,” Ford said. “That’s what it takes right now. We’ve got to find a way to figure this thing out, and we figured out how to finish the game out.”

The Saint Louis University Billikens beat the University of Richmond Spiders 72-67 at Chaifetz Arena in St. Louis on Feb. 26, 2021.

Saint Louis University guard Jordan Goodwin (0) brings the ball down for his team during the second half of the Billikens' game against the University of Richmond at Chaifetz Arena in St. Louis on Feb. 26, 2021. The Billikens beat the Spiders 72-67. Photo by Sara Diggins, sdiggins@post-dispatch.com