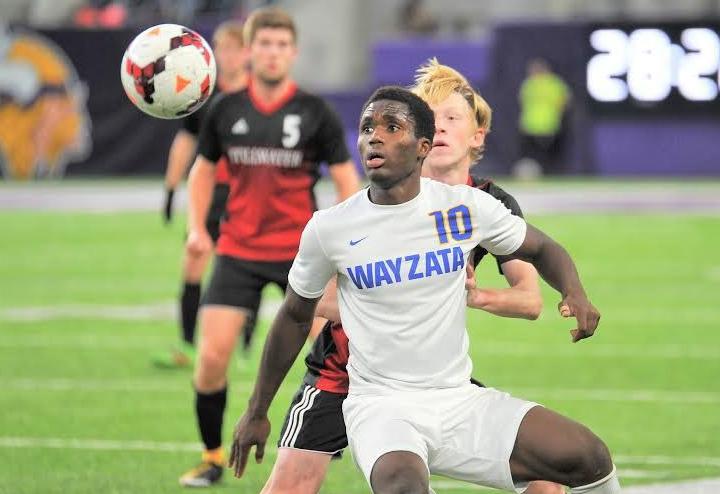 Patrick Weah, who has signed with St. Louis University, played for Wayzata High in the Minneapolis area through his sophomore year. Photos courtesy Wayzata High School 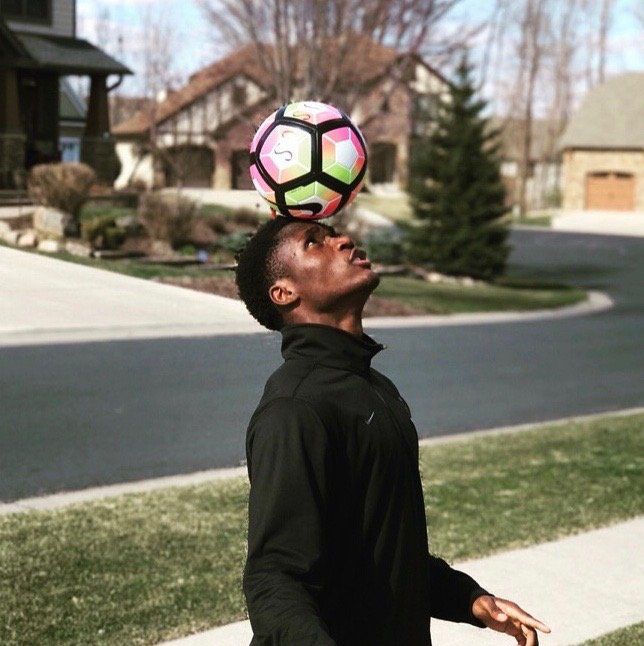 Soccer balls were not always really soccer balls when Patrick Weah was learning the sport in Liberia.

Those makeshift balls took a beating for hours every day, up to seven hours sometimes, Weah said, before games were interrupted only by sleep.

“The whole culture was soccer,” he said. “It’s like a religion there. It was everything we talked about. Soccer brought people together. I came from a very poor background, and that was our escape from everything else. If you were feeling down on yourself, you’d go play with no food in your stomach because we just loved the game.”

Weah didn’t play regularly with a ball until he moved to the United States in 2011. He had much to learn about American soccer. For instance, he had never heard of St. Louis University, let alone its soccer program, until a recent contact turned out to be quite fortuitous for coach Kevin Kalish.

The 16-year-old senior, who recently spent several weeks training with Minnesota United FC of Major League Soccer, has signed with the Billikens and will be part of Kalish’s latest recruiting class, which has yet to be announced.

“We’ve watched him many times in the last 12 months,” Kalish said. “We were unsure whether he was going to college. He was on a trajectory of going professional. We got wind he was available. It was probably the fastest recruitment since I’ve been here.”

Extremely young for his class, Weah is 6-foot-1, 185 pounds. He was recently ranked as the 26th best player under 20 years old in the United States by one website. And SLU was able to nab him from an array of suitors, including Virginia, Notre Dame and UCLA.

Weah was not included in 2020 recruiting rankings because there was some confusion about when he would graduate. SLU pounced at the right time.

“I didn’t know what SLU was until I got a call from coach Kalish,” he said. “The program attracted me to it. The history and culture is really good. They’re going to develop me and make me better.”

Weah has some impressive family links to the game. George Weah, an uncle, was considered one of the world’s best strikers in the 1990s and is now the president of Liberia. Tim Weah, a cousin, is a member of the U.S. men’s national team. Patrick Weah’s brother, Clarence, is a member of Sporting Kansas City’s under-19 academy team.

But Weah is rising in the soccer world on his own terms with an appreciation for the game that started as Liberia was emerging from a period of civil war.

Weah said the lack of soccer balls was only one obstacle in those days. Games were often played on streets of gravel and some children didn’t have shoes. They loved the game so much that playing in bare feet was a small price to pay.

His grandparents moved to the U.S. first, and Weah followed a few years later with his mother and two brothers, leaving their home on the west coast of Africa.

The player that landed on coach Dominic Duenas’ team as a freshman at Wayzata High School was polished and ready to dominate. Duenas believes Weah is ready to play at the college level.

“Of all the players I’ve coached, he’s by far the biggest impact player,” he said. “He was really strong and fast. He can take people on and is strong with his back to the goal. He’s a very impactful player.”

Wayzata was 38-1-5 in Weah’s two seasons on the team. The team scored 89 goals his sophomore year, and he was directly involved in 35. Duenas said he created another 20 by drawing fouls or creating corner kicks.

Looking back at his early days, Weah can see how his regular routine playing with a ball made of newspaper on the street impacted the player he has become.

“I think it made me better with the ball,” he said. “My strength, speed and ability is from genetics, and I’m grateful. But the skills I learned playing in those games. I would get over 1,000 touches a day playing in Liberia.”

His development has been rapid and reached a new height when he was asked to train with MLS players early this year.

He was fortunate the opportunity to join practices came before sports shut down due to the COVID-19 pandemic. That gave him about three weeks of workouts with the professionals, several times each week.

“The environment was intense and the players were faster and stronger,” he said. “But I thought I fit in very well. My first day was the best because I was really excited and wanted to show them I could do some stuff. Overall I don’t think I struggled playing with them at all.”

It’s not often a college program gets a player who last wore the uniform of a professional franchise, even if it was on a temporary basis.

“We thought we had a top-30 recruiting class before Patrick,” Kalish said. “He’s just icing on the cake.”

The Billikens were impressive in the first half as they ran away early, and Ford was able to rest his starters most of the second half.

St. Louis University basketball games at Chaifetz Arena will be played without fans to start the season, the athletics department announced Su…

The Althoff Catholic product is soaring up the SLU career charts and will finish among the program's top 10 in steals, rebounds and assists.

SLU gets fast start with opening win over SIUE

Season opens with no fans at Chaifetz Arena.

SLU has abundance of offensive threats

SLU, LSU agree to move game to Chaifetz from Nebraska

SLU: Five keys to the season

Yes, free throws are one of the keys.

Coaches kept players active via video conferencing during their 14 days away from practice.

SLU withdraws from Nebraska tourney, will play LSU at Chaifetz

'It’s about being totally comfortable with all the COVID processes, so we think it’s better to stay home next week,' says athletics director Chris May.

St. Louis University basketball games will be broadcast on KMOX starting this season after the athletic department reached a multi-year agreem…

Patrick Weah, who has signed with St. Louis University, played for Wayzata High in the Minneapolis area through his sophomore year. Photos courtesy Wayzata High School