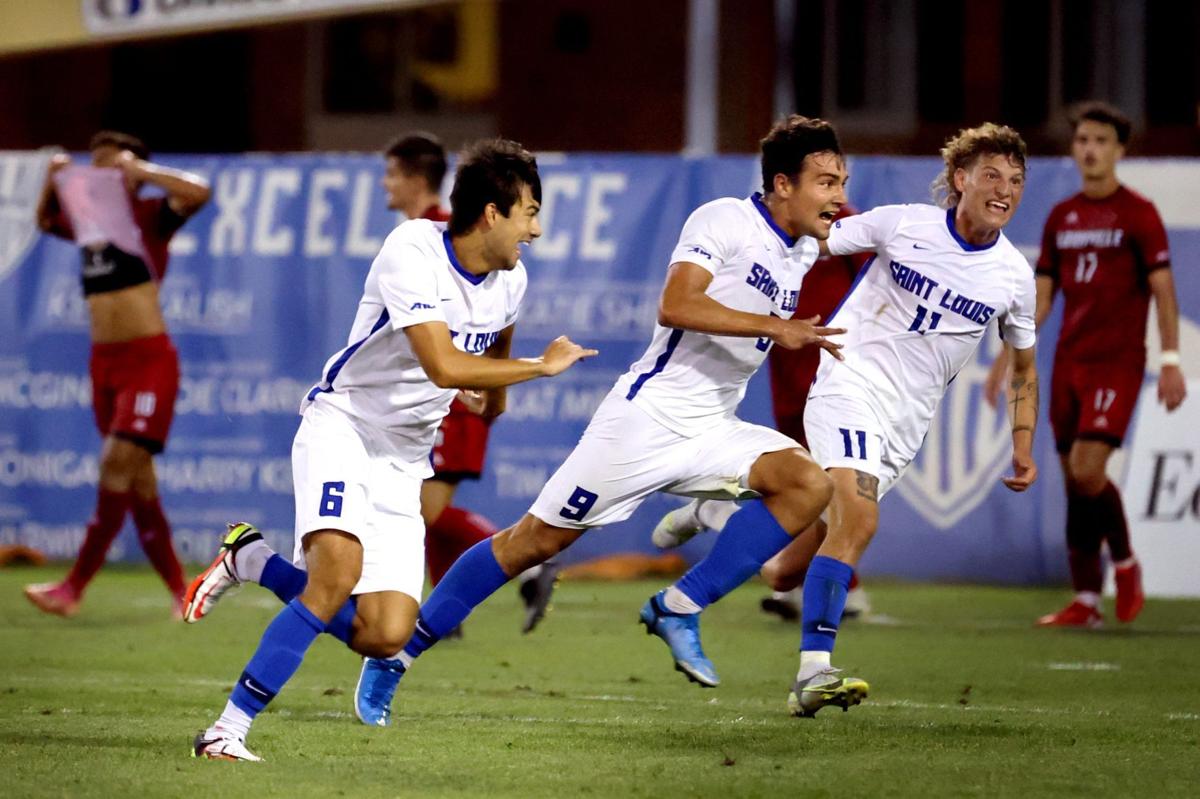 St. Louis University forward Simon Becher, center, sprints to the corner to celebrate after scoring in extra-time to lift SLU to a 2-1 win over Louisville at   Hermann Stadium on the St. Louis University campus on Thursday, Aug. 26, 2021. Photo by David Carson, dcarson@post-dispatch.com

St. Louis University forward Simon Becher, center, sprints to the corner to celebrate after scoring in extra time to lift SLU to a 2-1 win over Louisville in August. 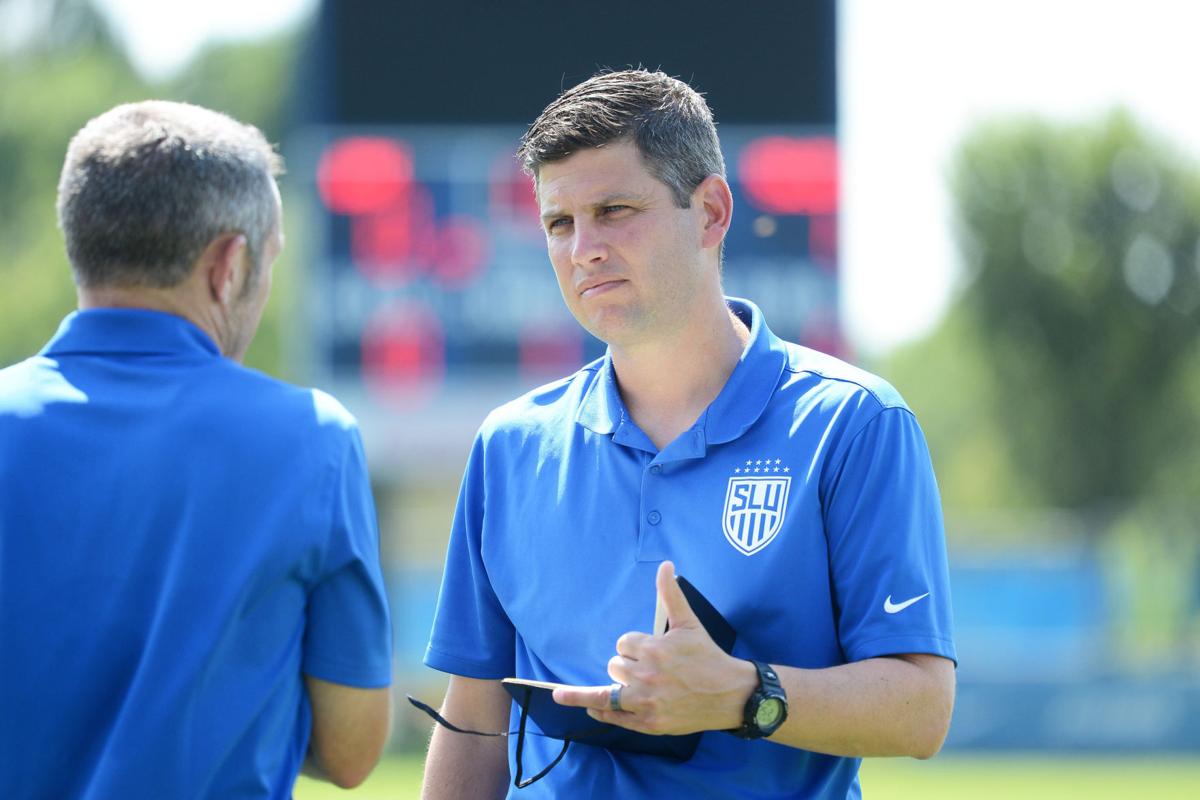 St. Louis University men's soccer coach Kevin Kalish has his team at 9-0-3 overall and 5-0 in the Atlantic 10 Conference.

The soccer season at St. Louis University started with a hint of a promise from coach Kevin Kalish, who insisted the legendary program eventually would return to national prominence but without a timeline for that arrival.

Now that the Bilikens have started Kalish’s fourth season by refusing to lose through 12 games and firmly implanting themselves among the top 25 teams in the country, he’s still not ready to say the job is done.

SLU returned from a two-game trip with the program’s longest season-opening unbeaten streak in 50 years and hope of ending a six-year absence from the NCAA Tournament. There are no guarantees yet, just a few reminders of the old days, when the postseason was a given.

“We have talent as good as anyone in the country, in my opinion,” Kalish said. “But you don’t ever know how a season is going to play out — if everyone will buy in and if you’ll catch some breaks. A lot has to transpire to go on a run, but I knew we had a lot of talent and that these guys had played together a lot.”

The Billikens are 9-0-3 overall and 5-0 atop the Atlantic 10 Conference after wins at St. Joseph’s and Virginia Commonwealth. They are No. 14 in the United Soccer Coaches poll and will likely improve slightly when the rankings are updated Tuesday. They jumped to No. 6 this week in Top Drawer Soccer’s poll.

But when a program hasn’t lived up to expectations for nearly a decade, nothing is taken for granted. SLU has a solid postseason resumé at this point with wins over Louisville and VCU and a tie with Southern Methodist, but three regular-season games remain, starting Saturday at home against Dayton, followed by the A-10 tournament.

“If we play as well as we can, we think we can beat anyone, and we’ve done a good job keeping at that level,” junior forward Simon Becher said. “Since I’ve been here, we’ve played good teams well. It’s just hard being consistent at it. Something around this team feels different.”

In the two seasons before Kalish’s arrival, the Billikens were fortunate to score one goal per game and were shut out 12 times. The roster slowly has added scorers who are paying dividends.

Becher has eight goals and seven assists to rank fourth in the country in points, with 23. He won his second consecutive A-10 offensive player of the week award Monday.

He suggested that award should have gone to his roommate, John Klein, who leads the nation in assists (12). Scoring no longer is an issue for a team that is 12th in scoring offense, with 2.5 goals per game.

“When we got here in 2018 we wanted to find goal scorers. Those are difference-makers in college soccer,” Kalish said. “Right now we have a lot of really good attacking players. It’s nothing the coaches have done. Just get good players and let them perform.”

SLU has 14 players who have scored at least one goal and seven who have multiple goals. They are backed by a strong defense with goalkeeper Patrick Schulte, defender Mujeeb Murana, a first-team all-conference pick last season, and defender A.J. Palazzolo, a transfer from Indiana.

The Billikens were No. 21 in the first RPI rankings released Monday by the NCAA. A game against a strong Central Arkansas team was postponed, and the teams are still trying to determine if they can play in coming weeks.

If SLU can hold onto first place, it will host the A-10 tournament with a chance to play every game at Hermann Stadium.

The Billikens have had a few tough moments, but not many. They let leads against Illinois-Chicago and Southern Illinois University Edwardsville slip away in the final 10 minutes and had to settle for ties.

Since the SIUE draw, the Billikens have been more opportune in their scoring. They came up with two goals in the final 10 minutes to win at Massachusetts and won on an overtime goal by Chandler Vaughn at St. Joseph’s.

“We always feel like we have a chance or are going to win,” Becher said. “This group always feels like that goal is coming or like we’re going to get that second one. When you have confidence in who you’re playing with, a lot of things go your way.”

It’s been a while since things have gone the way the soccer community came to expect during a run of 48 NCAA Tournament appearances in 56 years or the run of 10 national championships from 1959 to 1973.

Getting back to the postseason and doing it regularly is the first step in re-establishing the national reputation as a title contender.

“It’s great to see us trending in this direction and moving the needle forward,” Kalish said. “But to be honest, we haven’t accomplished anything yet. We have to continue to put our foot on the gas.”

Bob O'Loughlin addition is expected to help in recruiting for all sports.

No. 11 SLU remains undefeated with 2-0 win over Dayton

A stellar high school wresting career was not directly related to St. Louis University’s interest in Isaiah Parker, who was recruited in socce…

The NBA is his goal, and he knew he needed to create an NBA body with another strong college season to get a serious look.

St. Louis University forward Simon Becher, center, sprints to the corner to celebrate after scoring in extra-time to lift SLU to a 2-1 win over Louisville at   Hermann Stadium on the St. Louis University campus on Thursday, Aug. 26, 2021. Photo by David Carson, dcarson@post-dispatch.com

St. Louis University forward Simon Becher, center, sprints to the corner to celebrate after scoring in extra time to lift SLU to a 2-1 win over Louisville in August.

St. Louis University men's soccer coach Kevin Kalish has his team at 9-0-3 overall and 5-0 in the Atlantic 10 Conference.