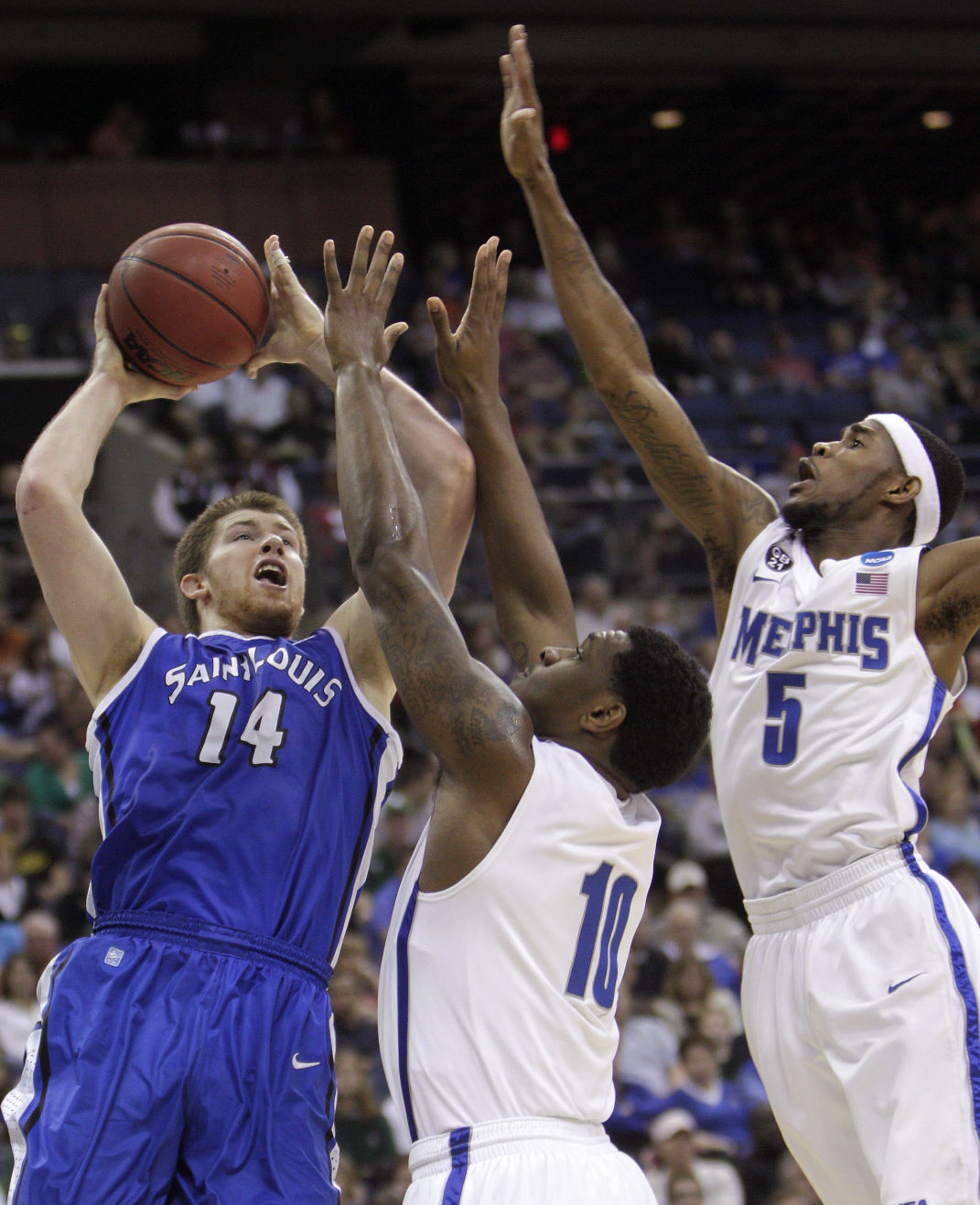 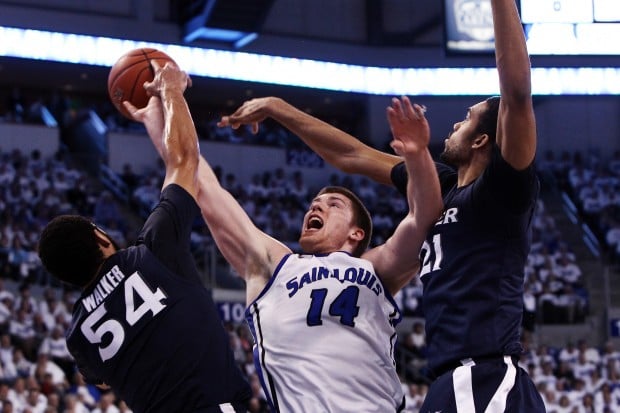 COLUMBUS, OHIO • In the locker room for the winning team in the NCAA Tournament, there are nothing but silver linings, which is why St. Louis University forward Brian Conklin could look at his most bizarre stat line of the season and see a bright side.

Conklin almost had his first double-double against Memphis, in a most undesirable way. He scored 16 points — 10 of which he got at the free throw line — and committed eight turnovers, a number that even stood out as being over the top to him. SLU had four games this season in which the whole team had fewer than eight turnovers.

But considering that Conklin could have an eight-turnover game — no SLU player has had that many in at least the past three seasons — and still be considered one of the star players of the game, well, there must be some bright spot.

"The ball was taking bad bounces," Conklin said. "But you can always go back and play defense and box out, and that's what we did. I just got my guy off the board, we swooped in and started the fast break. Eight turnovers doesn't help the team, but maybe it made me play harder on defense."

Maybe it did. Among the many messages coach Rick Majerus has driven into his team over the years is one of what he calls "not playing backward" — not letting previous mistakes affect what you do next. Just because you missed a shot is no reason you can't play defense. You have to keep looking forward.

Conklin said it took him until about halfway through his junior season for that message to sink in. Despite all the trouble he had, and there was one point at which he threw the ball away two straight times, Conklin still made seven of eight free throws in the final 3:02 of the game and still did everything he was supposed to do defensively.

"It was super important," he said. "Eight turnovers, but knowing you had to still make plays and go to the free throw line and knock big ones and put what happened in the past in the past."

Majerus said, "He stayed with it. Conklin did a real nice job of being more mature. He gets emotional. He's an emotional player. But he has to be emotional to be effective to a certain extent. So the question is, 'When do you temper his emotion?' You don't want to bridle it."

Not playing backward works another way. Just as Conklin had to put his struggles with the ball behind him on Friday, SLU (26-7) has to get past whatever celebratory feelings it has about the school's first NCAA Tournament win in 14 years. That's because it faces the West Region's top seed, Michigan State (28-7), Sunday afternoon at Nationwide Arena.

"We've got to guard against happy-to-be-here syndrome," Majerus said Saturday.

That wasn't a problem on Friday, as SLU stuck tenaciously to its defensive philosophies and kept Memphis rattled to the end. Now, it has to do even more on Sunday.

"After the game, players were happy and clapping," SLU guard Kwamain Mitchell said. "But this morning, we put that DVD (of Michigan State) in and it's a whole different world now, because they're a great team."

The Billikens aren't just jumping from the frying pan to the fire, but to something even hotter.

Majerus had compared Memphis to Massachusetts on steroids for its speed and athleticism, which would make Michigan State, what?

It will take a doozy. While Memphis was 21st and 13th in offensive and defense efficiency, respectively, according to kenpom.com, Michigan State is eighth and third. Michigan State coach Tom Izzo was predicting that the game would be "a war" because of the physical nature of the teams.

Conklin's long summer of shooting in the practice gym at Chaifetz Arena paid off on Friday when he kept making free throws. He said that while shooting in the summer, he visualized doing it in the NCAA Tournament. "This is why I did it, for this moment," he told himself at the line.

Conklin visualized more than just making free throws. He visualized making the tournament, and visualized winning games there. It turns out that the reality of it is better than any dream.

"You visualize it, but once you get the reality of it, you can't compare," he said. "(Friday) was amazing. It was really fun. But now it's time to get that happiness out of the way and get ready to play a tough game."

It's what he's been taught for four years. No matter what happens, good or bad, never look back.

Bernie: Billikens are daring to dream

SLU players honestly think they can beat No. 1 seed Spartans in a game of tackle basketball.

Green is a worthy heir to the MSU lineage and he makes Michigan State, the No. 1 seed in the West Region, a very real candidate for a national title.

The #8 Saint Louis Bilikens will attempt to take down the #1 Michigan State Spartans on Sunday in Columbus. Bilikens Forward Brian Conklin add…