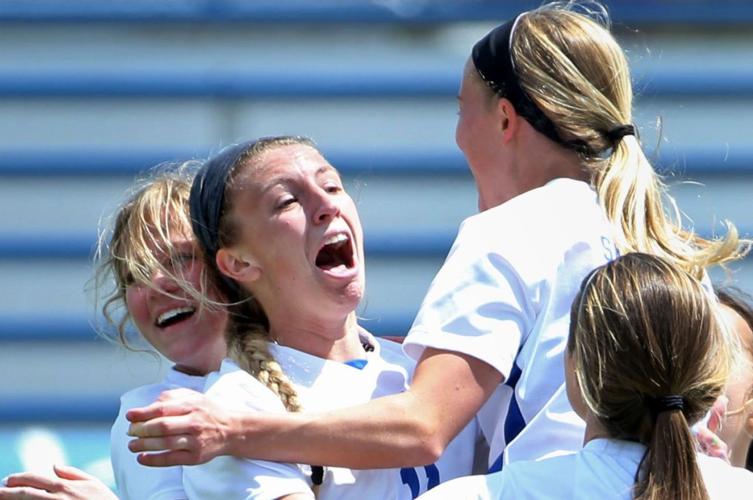 St. Louis University's Hanna Friedrich, center, celebrates with Hannah Larson, left, Sydney Beach and Anna Walsh after scoring on Thursday, April 15, 2021, in a victory over Dayton in the semifinals of the Atlantic 10 Conference tournament at Hermann Stadium in St. Louis. 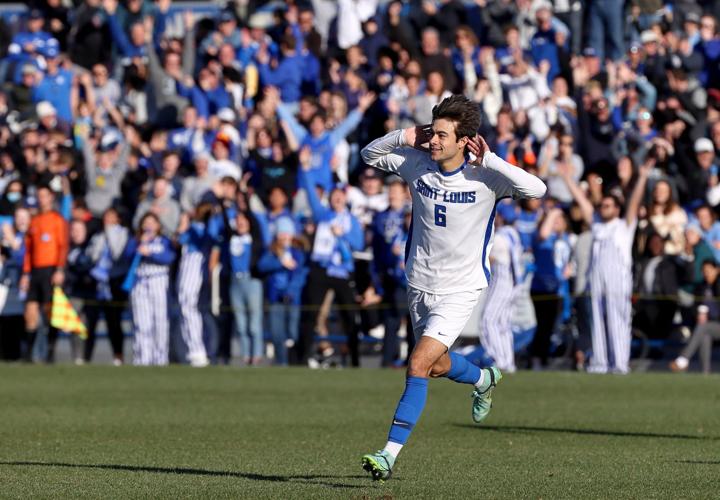 St. Louis University's Christian Buendia celebrates after scoring in the first half of a game against Long Island University in the second round of the NCAA tournament on Nov. 21, 2021, in St. Louis.

The Billikens will not only start preseason practice next week with a full allotment of returning starters, but they will regain the services of key veteran players who will create unprecedented depth and talent at SLU.

“It’s a good thing, and it will be an environment that is the most competitive it’s ever been,” Shields said. “We’ll have to spend a lot of time with each individual just to understand roles and make sure we’re all headed in the same direction. There are never enough minutes for all the players who want to play. This year is different because COVID made the roster the biggest it’s ever been.”

While Shields will have an overflow of starters from which to choose, men’s soccer coach Kevin Kalish finds himself with a different dynamic. All but two starters are gone, and he is restructuring with last year’s reserves, a batch of transfers and what appears to be a strong freshman class.

Both teams will seek to repeat their postseason success, but their starting points will be polar opposites. It has been well documented that the men lost eight players to professional soccer after reaching the NCAA Tournament quarterfinals last year.

“We’ll do more from a teaching standpoint with a lot of guys learning a new system and new concepts,” Kalish said. “The relationship-building piece is vital. From an evaluation process, we have a lot of new faces and spots that are wide open, so we’ll spend time seeing who’s in the best form.”

The women, meanwhile, have stability in a large batch of seniors thanks to the extra year of eligibility that COVID afforded. Defender Brionna Halverson will be in her sixth year and a couple of players in their fifth.

Ranked No. 21 to start last season, the women arguably are in better position a year later if everyone stays healthy. Shields built a schedule to match the anticipation, with national powers Arkansas and Notre Dame among the team’s opponents.

“I think we should be (ranked),” Shields said. “If you look at other teams that have been, we should be. But I don’t think we’ll get that nod, and I think that’s better.”

The men ended 2021 ranked No. 7 in the country after not appearing in the preseason poll of the United Soccer Coaches last fall. The only starters the Billikens return will be national assist leader John Klein and midfielder Christian Buendia.

However, they had a strong spring showing against national-caliber competition such as Indiana and Tulsa with only bits and pieces of the team that will start practice in early August. Kalish used the spring to evaluate and identify areas in which he still could bring in players to help.

“We recruited some fantastic individuals that fit our identity and who we are,” he said. “There’s still a tremendous amount of talent in the program.”

Among the men who are new to the program will be five transfers of which four are grad students with one year of eligibility remaining.

Members of the women’s team have been spread around the region playing on summer teams. The most notable among the vast array of accomplished performers will be Hannah Friedrich, who has a chance to finish as the leader in several career offensive categories for SLU.

But the team is loaded with scorers and has players who have accounted for 102 college goals, including Friedrich with (29) and Abbie Miller (14). Emily Gaebe led the team in goals last year as a freshman when inserted in the lineup due to injuries.

Hannah Larson tied for the team lead the previous season but was sidelined in 2021 because of a torn ACL. Emily Groark, also returning from an injury, and Caroline Kelley provide more high-level scorers. SLU also has added midfielder Julia Simon, who led Louisville in points last season.

“We’re deepest higher up,” Shields said of the forward and midfield positions. “The dream is to always have two players who could realistically start (at the same spot), depending on the game or opponent or injuries.”

Preparation time is short for both teams.

The women will play one of two exhibition games Aug. 10 at home against Lindenwood and open the season Aug. 18 against Arkansas. The men start practice a week later and play their first exhibition match on Aug. 14 at Missouri State before opening the season on Aug. 25 at Louisville.

Will Bailey returns to SLU as assistant coach

Perkins is back and plans to play on SLU's European tour

On a team with 10 seniors, Halverson is the elder stateswoman, having taken advantage of a bonus season afforded by COVID.

Larson was first-team all-Atlantic 10 as a freshman. Groark was coming off a seven-goal season in which she was second team in the A-10. Lawler made the all-rookie team in her first year at SLU.

SLU women open with win over No. 8 Arkansas

SLU made a goal by Emily Gaebe in the first half at Hermann Stadium stand up with a strong defensive effort that limited the Razorbacks to two shots on goal.

St. Louis University's Hanna Friedrich, center, celebrates with Hannah Larson, left, Sydney Beach and Anna Walsh after scoring on Thursday, April 15, 2021, in a victory over Dayton in the semifinals of the Atlantic 10 Conference tournament at Hermann Stadium in St. Louis.

St. Louis University's Christian Buendia celebrates after scoring in the first half of a game against Long Island University in the second round of the NCAA tournament on Nov. 21, 2021, in St. Louis.