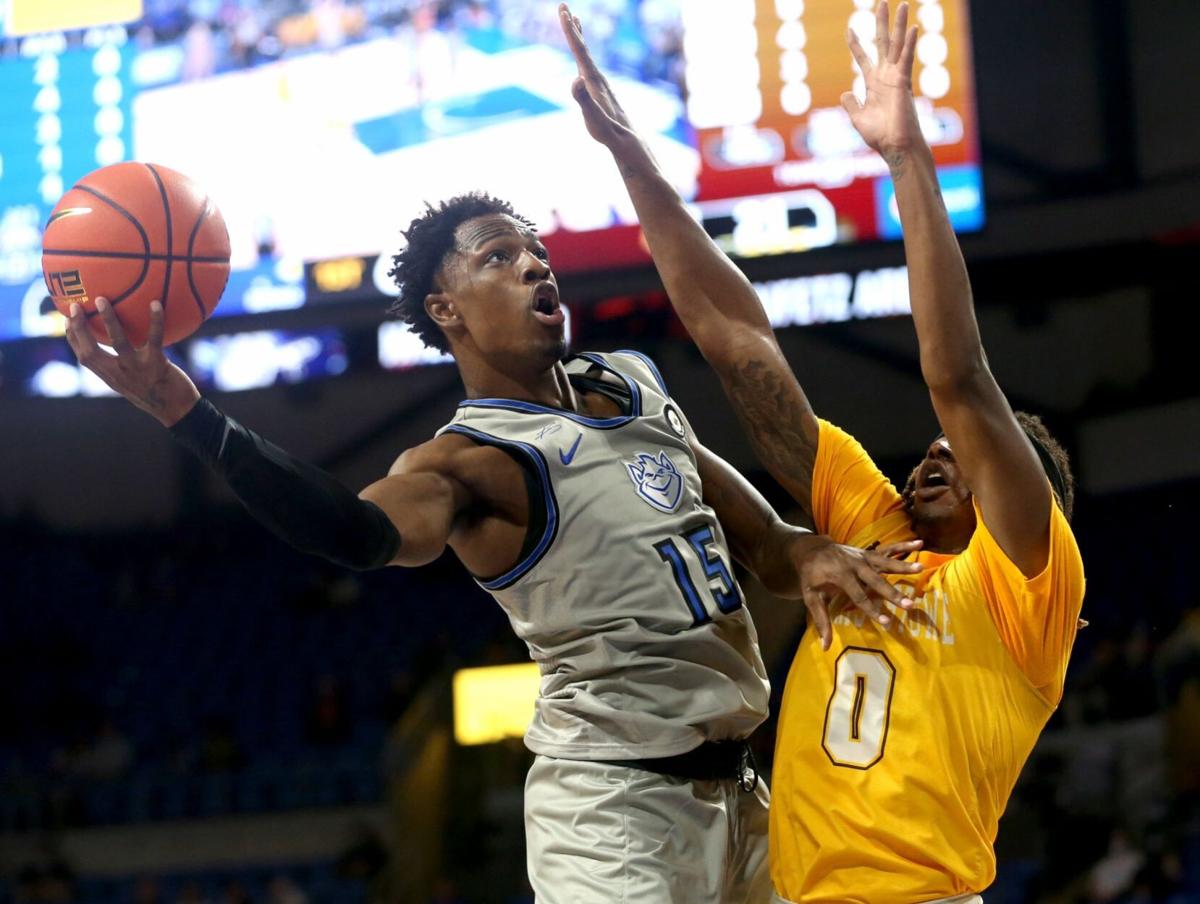 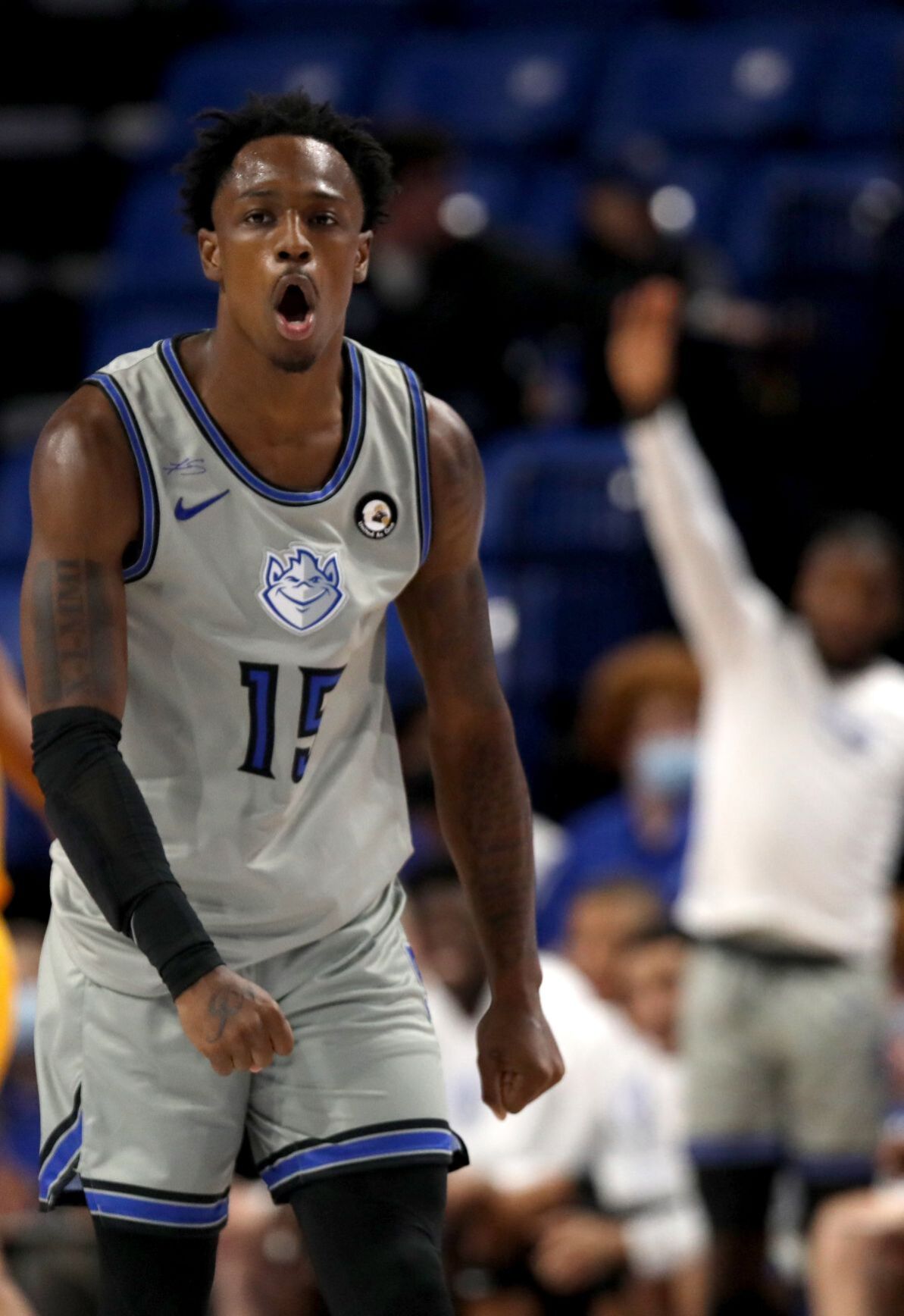 Saint Louis Billikens guard Jordan Nesbitt (15) celebrates after scoring during first half action of a basketball game between Saint Louis Billikens and Harris-Stowe Hornets on Wednesday, Nov. 10, 2021, at the Chaifetz Arena. Photo by Laurie Skrivan, lskrivan@post-dispatch.com

Reminders of some significant moments from Jordan Nesbitt’s life are etched into his arms, and they represent the best and worst of times along with at least one hint as to why he is at St. Louis University.

His date of birth, a quote about his late mother and the name of his daughter are mixed among his tattoos and are part of the 20 years that led to him being a Billiken, albeit with a short detour.

After starting his college basketball career at Memphis, Nesbitt quickly realized he wanted to play in his hometown. The decision to transfer has led to Nesbitt’s return trip to the FedExForum for Tuesday night’s game between SLU and No. 11 Memphis.

Aside from any outside factors, the 6-foot-6 freshman, who was a four-star recruit, realized last winter that his initial college decision was not the right one after he joined the Tigers for the spring semester.

“That whole experience was crazy,” Nesbitt said. “I felt at the time it wasn’t even right. Not to diss any other school, but I felt in my heart it was SLU all along. It took until I got down there. The first day I was like, man, I should be at SLU.”

The NCAA’s COVID-19 rules allowed Nesbitt to transfer without losing a year of eligibility. The move also allowed him to be close to daughter, Aria Samatra, who was born in the spring.

It put him in the arena where he watched games growing up and with players he got to know during his high school career at St. Louis Christian Academy.

“His daughter is what kind of brought him back, knowing he had all of that going on,” said Nesbitt’s father, Chris. “I feel like he’s being more responsible, and I’m seeing the maturity, knowing that it’s not just about him anymore. I see him smiling a lot more. He seems to be really enjoying himself.”

Nesbitt moved into the starting lineup when Javonte Perkins was lost for the season and has averaged 13.3 points and 6.7 rebounds in SLU’s first three wins.

Expectations have increased for Nesbitt, and SLU coach Travis Ford has made it clear that his basketball maturity is going to be needed this season.

Returning to Memphis so soon in front of a large crowd could be overwhelming. Nesbitt practiced with the Tigers through the second half of last season and got into three games briefly.

Chris Nesbitt said Ford always seemed like the most loyal of the coaches who recruited his son before the choices were narrowed last year to SLU, Memphis and Illinois.

Nesbitt said he talked to his father almost every day after leaving for college in January. It wasn’t that he disliked Memphis but that he felt a pull to be home.

“It never felt right from the time I decided to go,” Nesbitt said. “Practices were fun. I was playing against a lot of guys that are supposed to be pros and holding my own. I was making a mark, and they knew I was there. I thought if I could do it there, why not go back home.”

So Nesbitt entered the transfer portal, knowing he would hear from SLU. Other schools made contact, but he committed to the Billikens in a day or two. Soon after, Aria was born. Her middle name honors Nesbitt’s mother, who died of breast cancer when he was a high school freshman.

She never was able to see him blossom as a player, become a major recruit and average 16.6 points, 8.7 rebounds and 4.2 assists as a senior.

At SLU, Nesbitt will fill numerous roles as a shooter, slasher, rebounder and ball handler. His defense could become a major factor in disrupting opponents. For now, Ford is trying to walk a fine line between tempering expectations and asking Nesbitt to contribute a lot.

It’s a good problem to have after it appeared Nesbitt got away. Things are different for him at SLU than they were at Memphis, most notably the adjustment to Ford’s sometimes long and arduous practices.

“The biggest challenge every day you step on the court is no laziness,” Nesbitt said. “You have to be 100% ready every time. You can’t be tired or you’re not going to play. I’m getting there, but it’s still a learning curve. He’s teaching me, and he’s going to make sure I’m ready.”

A mid-major team has reached the College Cup every year except one since 2010.

SLU’s NCAA soccer run comes to an end at Washington

After winning in the rain on its home field last weekend over Indiana, Washington appeared comfortable with the soggy conditions in a 2-0 win.

SLU gets second loss in basketball as UAB has late run

Billikens now 7-2 on the season after home defeat.

Billikens host Blazers in game that was moved up to 5:30 p.m. this week.

Saint Louis Billikens guard Jordan Nesbitt (15) celebrates after scoring during first half action of a basketball game between Saint Louis Billikens and Harris-Stowe Hornets on Wednesday, Nov. 10, 2021, at the Chaifetz Arena. Photo by Laurie Skrivan, lskrivan@post-dispatch.com