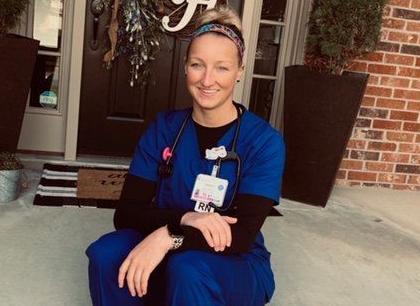 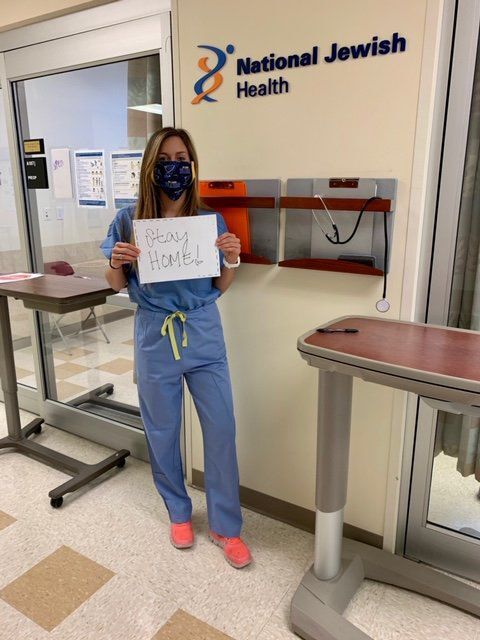 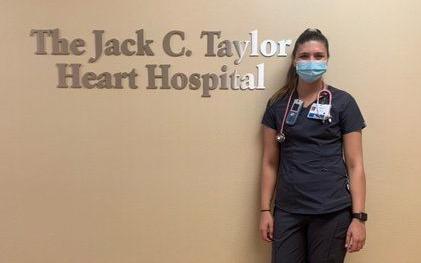 Jordyn Frantz, a former basketball player at St. Louis University, is a nurse at St. Luke's Hospital, where she has worked extensively with COVID patients. Photo courtesy Jordyn Frantz 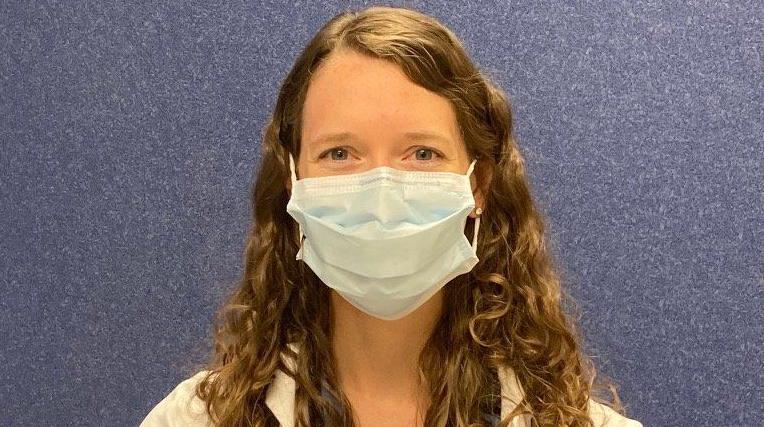 Exhaustion was not an option for Jordyn Frantz as a college student.

That was especially true her last year at St. Louis University, when a road trip for a basketball game might have been followed by a 12-hour hospital shift for her nursing major and then a weight-lifting session.

It’s a schedule many face as they extend their athletic careers through college — in many cases to help pay for their undergraduate degrees — while simultaneously pursuing a career in medicine.

The payoff for Frantz came when she graduated from SLU in May 2019 with a nursing degree. Then, like many recent graduates in fields of medicine, she was thrust into a job working with COVID-19 patients and faced with the stress and chaos of the unexpected chore.

“In nursing, time management is important and that’s what you learn through playing college basketball,” Frantz said. “I didn’t have time to sit around. I was always doing something. That’s helped me so much with how busy the floor is. Floor nursing is hard, but I’m so used to being on the go that it doesn’t bother me as much.”

Studies have been conducted and papers written about the important characteristics college athletes bring to their work in medicine.

Several years ago, Washington University published research on the attributes of their top medical residents in a specific program. It turned out that the highest faculty ratings went to those who had been involved in team sports.

“Being an athlete kind of set me up well for medicine,” said Dr. Liz Harmon, a former track and cross country athlete at Washington University. “I think a lot of athletes gravitate toward health care because you’re part of a team and doing something bigger than yourself. There’s a lot of teamwork in medicine.”

Numerous former college athletes from St. Louis-area universities now find themselves challenged to perform under a different type of pressure on the front line of a public health crisis.

The former Washington University track and cross country standout started 2020 at the University of Washington Medical Center, which was at the forefront of the initial outbreak, as its chief resident she has since moved to Mercy Hospital in St. Louis as an emergency room physician.

In Seattle, she saw multiple patients each day who arrived with COVID and needed some degree of treatment. In some cases, she had to intubate people, a procedure that opened her and others in the ER to a high level of exposure.

“Seattle was one of the first cities hit, so we were leading the country in response and figuring out protocols and setting standards others would build upon,” Harmon said. “We didn’t know about the disease and going to work was kind of scary. We were always afraid we were going to run out of PPE or bring it home to a loved one.”

Several of Harmon’s direct co-workers tested positive and recovered. One nurse in the hospital who got coronavirus in another department ended up dying.

Harmon would typically spend two hours or less with a patient in the ER before they were moved to a room or the intensive care unit. But she often would monitor patients during their stay. Some lived and some died, including one “particularly healthy, young person without co-morbidities.”

Harmon led Washington University to the 2011 Division III cross country championship. She achieved a 4.0 grade-point average in the School of Engineering, and was named the NCAA Woman of the Year in 2012. She then went to medical school at the University of Pennsylvania.

“Running and sports are a big part of my life and I relied a lot on those experiences when applying to med school or my residency,” she said. “It’s something they asked about during interviews. It’s easy to talk about how those experiences in a leadership role or as captain helped me learn from mistakes or overcome barriers and how they translate to the experiences you’ll have (in medicine).”

After playing three years of basketball at Missouri-St. Louis and graduating in May 2019, Henning returned to her hometown of Charlestown, Indiana, and started a job in Louisville, Kentucky, about 18 miles south. She is a nurse, working with expectant and postpartum mothers and their babies at Norton Hospital.

Over several months, the hospital was involved in a trial where all pregnant women receiving care were tested for COVID-19. She said typically there is at least one positive test per shift.

“These are mothers who generally have no clue they had it with no symptoms,” she said. “We’re trying to make sure that doesn’t change. The biggest obstacle is when the baby is born, are they going to keep the baby with them? We separate the baby to reduce the risk.”

Because it’s unknown if mothers can pass coronavirus to their babies, the newborns are tested 24 and 48 hours after birth. As of two weeks ago, none had tested positive. And when protocols changed, Henning and other nurses were allowed to begin working with groups of mothers and babies as well as a COVID patient simultaneously.

She agreed that a hectic college schedule was good preparation for her career. There were times she worked overnight on a Sunday and then had class at 8 a.m. Monday and practice in the afternoon.

“Being a student-athlete teaches you about accountability,” she said. “You have to be on time or there are consequences, and it teaches you not to give up and keep pushing through whatever adversity comes your way. I am the person I am today because of sports and nursing school.”

As a nurse at one of the largest respiratory centers in the country, Schmitz worked in the spring with a range of patients who had just discovered they were COVID positive. For some the symptoms were mild. Others were in need of a ventilator.

The former Maryville University soccer player from St. Peters works at Jewish Health in Denver, which eliminated elective procedures at the start of the outbreak to become a dedicated COVID unit that did mass testing.

“I was working four, 10-hour shifts, depending on the patient load, and sometimes it would go later,” she said. “We were getting a high influx of people and in order to have another patient come in the room, it was a whole process to decontaminate. We saw two in particular, as soon as they walked in we had to call an ambulance because they needed to be intubated immediately. It was pretty stressful.”

Schmitz graduated in 2017 and worked at Missouri Baptist for two years. She started at Jewish Health the first week in March just as the facility was transitioning to a COVID-only facility.

She became accustomed to working under less than ideal physical conditions in college. As she was finishing her degree, Schmitz spent two days a week working in a clinic and wasn’t getting much more than four hours of sleep most nights. She had three teammates who were studying to become nurses.

“It was almost too much to process at first, but once more information came out it was a lot less scary,” she said. “But hearing the horror stories of people in their mid-20s collapse and die of the disease, you realized it was real and could impact any of us.”

Three weeks after her orientation ended at St. Luke’s Hospital in Chesterfield, Frantz was surrounded by COVID-19 patients on a floor that was the last step before someone would move to intensive care.

She spent six weeks working nights and then moved to 12-hour daytime shifts. She was prepped briefly in orientation about what might be required in the event of a pandemic. Then it happened.

“It was overwhelming at first, especially with all of the deaths,” she said. “Nursing school doesn’t prepare you to hold someone’s hand as they’re dying, and it’s something I had to navigate. I would have my own two or three patients, but when someone was passing we would help each other.”

Frantz said some nurses on her floor did test positive. She spent much of the early portion of the pandemic in quarantine at her home in Illinois when she wasn’t working. After the hectic nature of her college schedule, she struggled at times with only working three days a week, but realized the value of off days.

“I couldn’t use my brain anymore because I was on such high alert for 12 hours,” she said. “I needed a couple of days to decompress.”

Frantz’s floor was all COVID patients for a few months. When the number started to decrease, nurses would alternate treating those patients. She is moving to the intensive care unit this month, where cases she sees will be more severe.

“Sometimes I’m afraid to go home and afraid to come back,” she said, “and find that someone is not going to be there.”

St. Louis University basketball assistant coach Ford Stuen is hospitalized due to “serious health complications,” according to his wife, Court…

An offseason roster churn will give the Tigers a new identity in 2021-22 but hasn't dulled Martin's outlook on the future.

Former Chicago Sun-Times player of the year should upgrade MU's athleticism on the perimeter. Can he become a reliable 3-point shooter?

But Tigers not underestimating South Dakota in opener Wednesday.

Jordyn Frantz, a former basketball player at St. Louis University, is a nurse at St. Luke's Hospital, where she has worked extensively with COVID patients. Photo courtesy Jordyn Frantz