Subscribe
Read Today's E-Edition
Share This
BenFred: After passing on chances to add certainty, nontraditional could be Cardinals' best bet for fifth rotation spot
0 Comments
Share this
1 of 2 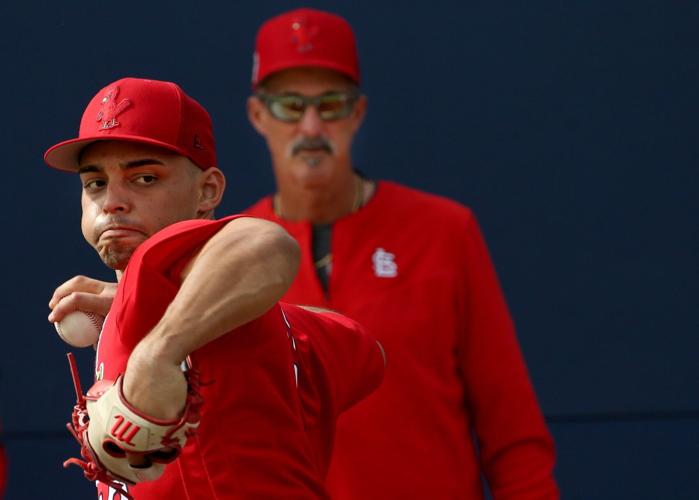 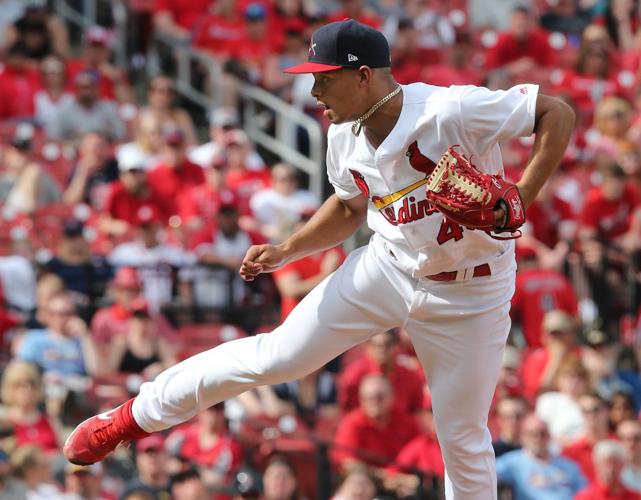 Cardinals pitcher Jordan Hicks might be bringing his 100 mph fastball to the start, rather than end, of games this season.

At this point, why not?

The more we keep seeing and hearing about the ongoing competition for the Cardinals’ unclaimed fifth spot in the starting rotation, the more it sounds like the best answer — at least until Jack Flaherty returns and proves he can stay healthy — could be the wild-card route.

Maybe there’s a branding opportunity there, too.

The Cardinals could announce a four-man rotation (Adam Wainwright, Miles Mikolas, Steven Matz, Dakota Hudson) and the use of a Wild Card.

First-year manager Oliver Marmol no longer sounds so certain about naming one pitcher as his No. 5 starter. On Sunday morning, he declined to categorize the competition as being solely between right-handed options Drew VerHagen and Jake Woodford. Both the manager and the front office have indicated they are open to the idea of something less traditional.

Just when the fundamentalists in Cardinal Nation started wrapping their heads around the idea of the designated hitter in the National League, they received fair warning from Marmol that another new-age look could be in play at Busch Stadium in 2022. This time, on the mound. Asked Sunday if an opener approach could be attempted at some point this season, Marmol said the notion of using a reliever where a starter usually appears could be an option.

“I think there is definitely some versatility in our bullpen to be able to do that,” Marmol said. “Not just one guy. When you look at who we have, there are several guys who could potentially do that.”

Asked if the fifth spot in the rotation could become a place for experimentation, Marmol answered, “potentially.”

Marmol also disclosed Cardinals coaches had spent a good chunk of Saturday night and Sunday morning debating and discussing the direction the team ultimately will decide to go with that unclaimed spot.

In a perfect world, the Cardinals front office would have signed Max Scherzer this offseason, or pulled off a spring-training trade for selling-off Oakland’s Sean Manea before the Padres landed him Sunday.

Here in reality, the Cardinals don’t have an obvious fifth starter as long as Flaherty is on the mend from the shoulder issue that popped up after he reported to spring training post-lockout. Not having an obvious fifth starter is an obvious risk. This is not exactly breaking news. What could make the uncertain situation worse, though, is trying to convince yourself you have one just for the sake of tradition.

What the Cardinals do have is an impressive and versatile mix of pitchers who are capable of handling multiple innings, a relief group that could be weaponized in all sorts of ways with a forward-thinking committee approach to that final rotation spot.

VerHagen and Woodford could both be part of that kind of solution. Others could as well. Including Jordan Hicks.

The high-velocity right-hander is aiming to throw two innings Monday. He believes he will be ready to pitch three in a game by the time the games count. How about asking him to get through the lineup once to start a game before passing the baton to teammates? How about him going even deeper than that, if the Cardinals feel they have enough other high-velocity options in the bullpen for the back end of games?

Hicks has had a very strong camp. He’s healthy. He’s throwing triple-digit heat easily after dialing back (just a little bit) his max-effort approach used in the past. He’s taking control of counts and working efficiently. He’s faced nine batters in Grapefruit League play so far this spring. Four struck out. One walked. Two grounded out harmlessly. One reached on a fielding error. Just one managed to get the ball out of the infield, on a line-drive out.

“They have to work a little harder to get on base, and they have to respect you more when you are in the zone,” Hicks, 25, said. “If I establish that I’m throwing strikes, which I will be, it’s going to be tough for the hitter to go up there looking to take.”

On the subject of his role, Hicks said he should have more clarity in the coming days.

The Cardinals, per Marmol, are set to have 15 pitchers on the opening-day roster. That will have to be trimmed down by May 1, but the temporarily extended depth builds the case to try something less conventional. If a standalone fifth starter was present in this camp, the answer should have been clear by now. It’s not.

Getting weird can feel scary. But it doesn’t have to be bad. As long as it works.

Of all the ways baseball has changed in recent years, the way to prove new things are smart remains the same.

BenFred: Games 2-162 will be ripe for debating Pujols' playing time. Sit back and enjoy opening day.

“Might have to put a popcorn machine in the dugout, or something,” said Miles Mikolas.

BenFred: Touch in hand, Matz ready to show Cardinals (and their fans) he can go the distance

“My comment was that if it was toxic, it must be in the front office,” La Russa told USA Today.

"I’m not a young guy anymore, and Knizner needs to have more playing time," Molina said.

A team built to hit fans squarely in the feels will be put to the test, to find out if 2022 is more about flashing back, or forging forward.

BenFred: Five numbers that jumped out during a Cardinals rain delay

Digging into a key goal for Hicks, Edman's slow start at the plate and more

“He is showing,” manager Oliver Marmol said after the win, “the Paul DeJong we wanted to see.”

Cardinals pitcher Jordan Hicks might be bringing his 100 mph fastball to the start, rather than end, of games this season.