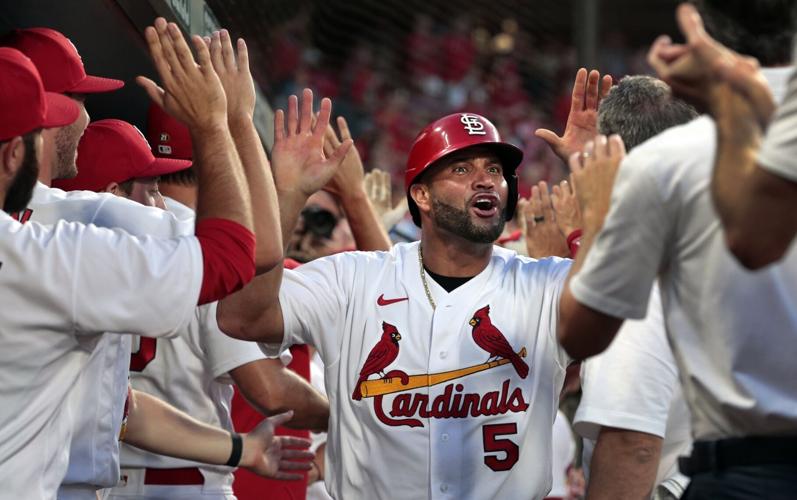 Albert Pujols celebrates in the dugout after scoring on a Corey Dickerson two-run home run in the seventh inning against the Phillies on Monday, July 11, 2022, at Busch Stadium. 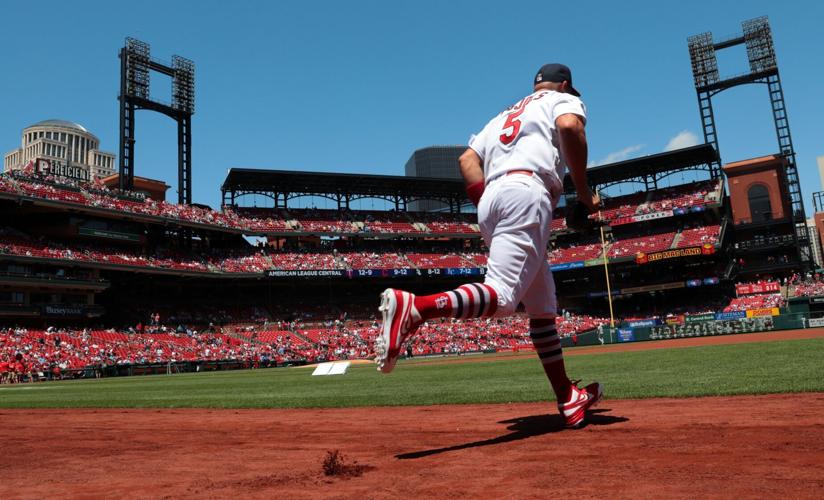 Albert Pujols takes the field during a game against the Diamondbacks at Busch Stadium on Saturday, May 1, 2022.

The Post-Dispatch is publishing a weeklong series on the storied careers of Cardinals Albert Pujols and Yadier Molina as their final regular season in St. Louis comes to a close. Pick up the print edition on Sunday, Oct. 2.

This was a gift, and it was shared.

A gift to Albert Pujols, from the Cardinals.

A gift to the Cardinals, from the future Hall of Famer.

A gift to each and every one of us who got to enjoy the renewed relationship between a historic team and a transcendent talent.

Sometimes we forget baseball is supposed to entertain us. We can stop remembering it’s supposed to be fun. It’s supposed to make our hair stand up on end, make goosebumps bubble up on our skin, make our hearts swell and eyes water and minds think, oh yeah, this is what it’s all about.

How many times did Pujols make us feel that way in this final season back home with the Cardinals?

And I do mean all of us.

“It’s almost like he has a magic touch, right?” Cardinals president of baseball operations John Mozeliak said. “Not every great player ends their career on a high note. Very few. He is. And that’s what makes it so special. His work ethic, his determination, his will was to want to be a part of this.”

The risk Mozeliak and the Cardinals took when they brought Pujols back on a one-year deal and introduced him to a Roger Dean Stadium crowd during spring training with a surprise entrance from the outfield was that the magic may not return.

Pujols in St. Louis had been unquestionably great for 11 seasons before he left. He was a future Hall of Famer before he departed as a free agent for the Angels after the 2011 World Series championship. Bringing him back was tampering with a seal on a time capsule. If it cracked, things could have been awkward at best, ugly at worst.

Instead Pujols turned back time.

Of course he did.

But he did it while also showing how time had changed him.

“What I’m doing right now,” Pujols said during his second-half surge, “that was something that, when I signed here, I was really looking forward to — helping this organization. I know that I don’t want to carry this ball club. I used to carry it for a long time when I was here, with a bunch of other guys we had on the team. Great organization. Great group of guys that want to win. Young players that want to learn. I’m blessed to be here.”

Pujols returned happier, quicker to smile and laugh. He called himself the grandpa of the club. He embraced a limited role and then expanded it with his production, never griping about at-bats that did not come his way. He taught by example before. He did again this season, but it was accompanied with bear hugs and arms thrown over shoulders. Not to be forgotten along with the records that will stand in baseball history forever are the images of Pujols laughing while pitching in a blowout, wrapping Yadier Molina and Adam Wainwright in dugout embraces, and mentoring whatever young hitter came his way.

Juan Yepez was stuck to his side for much of the season. Dylan Carlson hit a home run after Pujols tipped him off on a pitch. When Pujols pinch-hit over rookie Brendan Donovan and socked another homer, he returned to the dugout and told Donovan he would have done the same thing; Donovan had two home runs at the time. When energetic young outfielder Lars Nootbaar sent a ball sailing into the Cincinnati night as the Cardinals built their lead on the National League Central, Pujols hopped to the top step of the dugout and performed Nootbaar’s signature celebration of cracking pepper. Sweet. And man, so much fun. Fun for Pujols. For his teammates. For the decision-makers who overlooked the scar tissue of the past to embraces this reunion. For the fans who reveled in it.

It means a lot to many that some of the biggest Pujols hits and homers came in a Cardinals uniform again. Pujols leaving will always be a part of his story, but what he did before and once he was back, and that he came back, are now the defining parts of his story. Not just here. Everywhere. That matters. That is part of this gift. And more parts could come later.

No, I’m not talking about a Pujols return.

Whatever capacity he wants to be around in the future the Cardinals should embrace, of course, but he’s been adamant that this was a one-season situation, and the lack of waffling made it that much more perfect.

What I mean is the very real possibility of a post-Pujols effect on the Cardinals in a very positive way.

It wasn’t that long ago when a lot of talk surrounding the Cardinals centered on players who did not want to play for the Cardinals.

The biggest blow was Giancarlo Stanton stiff-arming the Cardinals to force a trade to the Yankees from the Marlins back in 2017.

A case could be made at that time that the Cardinals were becoming less attractive to the players they wanted to go get.

That should not be the case anymore, in part thanks to Pujols.

St. Louis since Stanton’s hard pass has become the place that took Paul Goldschmidt from the desert and helped him have his career-best year at age 34.

It has become the place that rescued Nolan Arenado from the reeling Rockies and proved he can thrive anywhere, not just in Colorado’s thin air.

And now it has become the place where one of the game’s biggest superheroes left, lost his powers elsewhere and regained them upon his return.

The truth is some players are made better by their place, and vice versa.

Pujols this season moved a massive amount of tickets for the Cardinals. He kept fans at the ballpark all game because they hoped he would write new history. He made the entire experience of going to Busch Stadium better.

And Pujols and his teammates benefited from that effect. He always has been an entertainer capable of ascending to the moment. Fans turned every single at-bat into a must-see TV. During the All-Star game and home run derby, those fans were his fellow MLB All-Stars.

Do you think those MLB greats who huddled around Pujols during the derby have an appealing view of the Cardinals these days? Put yourself in the spikes of a free agent to be. If the Cardinals come calling, does that call feel different than it did a year ago? How about if it’s followed with a call to Pujols to see what he thinks? Pujols isn’t going to disrespect the Angels by saying he never should have left. He will be honest with his peers if they ask for his advice.

Now imagine you are a young Cardinal the team would like to extend in order to keep free agency far away. Jordan Walker, perhaps. Does the success Pujols had with the Cardinals before he left and the lack of success he had after he left resonate differently now that he had success upon his return? It should. There is a reason he came back. There is a reason it worked. There is a reason some will always wonder how many more championships and home runs would have happened here if he didn’t ever depart.

This is a special place for a great baseball player. Special places make great players even greater. Pujols is proof, twice.

That’s why I wonder if we will come to find out years from now that Pujols’ last season here helped create more great seasons here.

It could nudge the front office to look for more perfect fits. It could influence free agents who want to come and help the Cardinals pay for their services thanks to the income Pujols helped generate. It could encourage current Cardinals, like Nolan Arenado, to stay because they realize there is a pretty good chance playing elsewhere could mean never again finding a place like this.

Leave? Come on. He loves this place.

Both the Cardinals and Phillies posted losing road records, but only one gets to host each game of this best-of-three series

How do you capture the impact of a baseball player’s career? With numbers, of course. We offer some different, perhaps little-known statistics about Albert and Yadi.

Quintana and Mikolas, starters for several years now, split Monday's game, and that piggyback approach is one strategy Cardinals could use in wild-card series.

Albert Pujols celebrates in the dugout after scoring on a Corey Dickerson two-run home run in the seventh inning against the Phillies on Monday, July 11, 2022, at Busch Stadium.

Albert Pujols takes the field during a game against the Diamondbacks at Busch Stadium on Saturday, May 1, 2022.