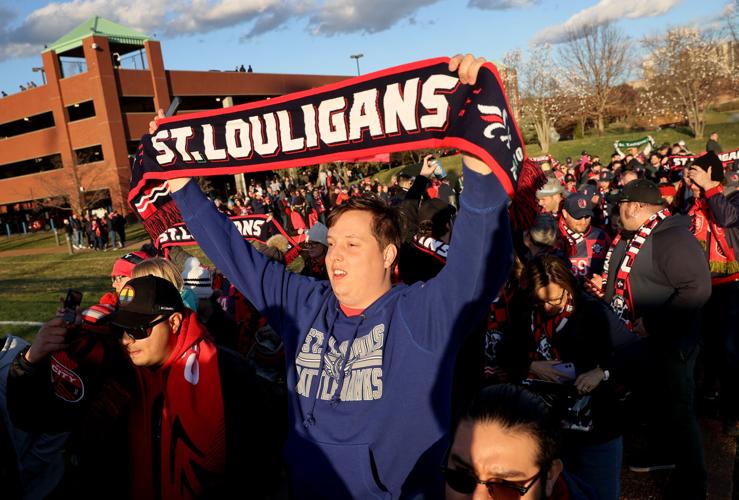 Bob Gravelle carries his St. Louligans scarf high as he marches into Hermann Stadium with other members of the St. Louiligans, a group of local soccer lovers, before St. Louis City2's first game in St. Louis on Friday, March 25, 2022. 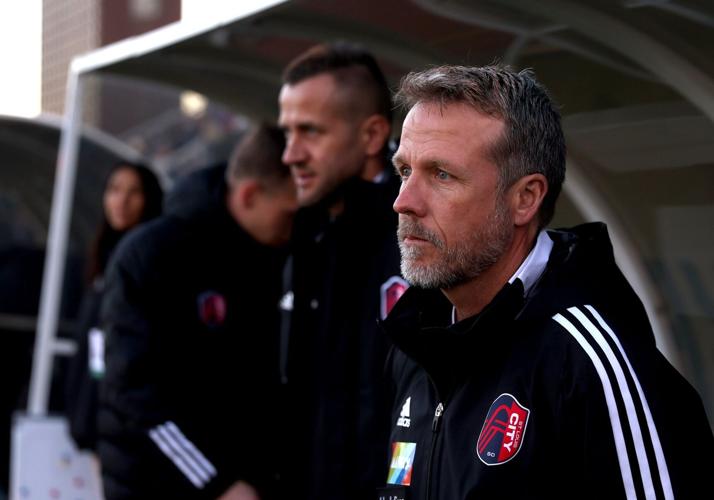 St. Louis City2 coach John Hackworth takes his spot on the bench before the start of a game at Hermann Stadium in St. Louis on Friday, March 25, 2022.

Look at the wins.

Look at the players producing impressive statistics within a new style of play.

Look at the fan response, whether measured by the crowd at a game or the one that shows up to the airport to welcome a player who has not yet played in one.

St. Louis City2, the local team in the MLS developmental league that began in March, was riding a seven-game winning streak until a 2-1 loss to Colorado Rapids 2 on Saturday night at Korte Stadium at Southern Illinois Edwardsville. Out of 21 MLS Next teams in action, City2 is tied for second in wins (nine) and points (30). It has scored 28 goals while allowing only 16 through 14 games. City2 is in the top five in goals, assists and on-target scoring attempts, per league-kept records. Only three teams have allowed fewer goals, and no team has allowed fewer shots against or created more interceptions.

City2 forward Josh Dolling is one of the league’s 12 players with six goals or more. Defender Josh Yaro is top five in interceptions. Midfielder Celio Pompeu is one of the league’s highest-ranked players in several dribbling and passing categories. City2, it can be argued, is the best defensive team in its league. It has allowed 39 shots in 14 games. No other team has allowed fewer than 45.

Lower, in the MLS academy ranks, City’s under-17 and under-16 academy squads both earned appearances in their respective national championship competitions. Forty-four of the 52 academy players are local products. Some were first viewed by sporting director Lutz Pfannenstiel during one-man scouting trips to high school games early after he was hired.

Three new teams up and running. Three new teams in the mix to be among the best in their class despite learning a new philosophy and figuring out playing styles of new teammates on the fly. The upshot should be clear enough. All of this bodes well for the big team’s launch in 2023.

It suggests good things about the soccer talent this area produces — no surprise there — but also this organization’s ability to scout it and combine it with additions added from the outside that fit the system.

Most important, these initial teams are providing a preview of an on-field identity that should attract and entertain the most committed soccer enthusiasts in addition to grabbing novices and newcomers. City wants to be aggressive, all the time. It wants to get on the attack and stay there, turning defense into offense. It wants to play in a way that forces people who think soccer is boring to realize they were wrong. Now, there are numbers — and wins — backing up the talk.

The vision was clear even in a City2 loss on Saturday, when City2 coach John Hackworth’s team spent the entire first half tilting the action toward Colorado after giving up an early goal. A furious push came late and threatened to tie a 2-1 defeat. Budding signs of a rivalry with Colorado are beginning to bloom, as evidenced by a healthy dose of two-way trash talk after the final whistle. (Yes, the Kroenke sports empire owns the Colorado soccer team, too.)

It was a Fourth of July weekend. It was raining. It was a half-hour drive for many in the bleachers. People had all kinds of reasons not to come. But still a crowd was on hand that was big enough to stun one of the Rapids employees on the road trip. Tailgates popped up in the parking lot before and after the game. Flags few. A steady drumbeat provided by a chanting fan gave a bass line for the action. In attendance was goalie Roman Burki, the biggest addition St. Louis City SC has made for its 2023 MLS roster to this point. Earlier that weekend, the former staple of the German Bundesliga had walked off a plane to see a line of 50-something St. Louis fans welcoming him to the start of his three-year contract. Talk about a warm introduction.

“This is the best soccer city in the country,” Hackworth said after Saturday’s game. “It’s always been that way, and it’s going to get better and better for us.”

We knew the soccer fans here were hungry for MLS. Left to be determined is how competitive their team will be when it launches. Early signs are encouraging, and they are increasing.

Playing the blame game helps no one, but the Cardinals need to study what they could not fix

BenFred: Surging Cardinals have chance to knock Brewers out of race before September

FanGraphs now likes the Cardinals' chances to win the division (59.7%) more than Milwaukee's (40.3).

Better spot? Tougher spot? Cardinals and ex-Cards wound up on both sides.

"I have no doubt in my mind we will get back," Tatum said of Boston's loss to the Warriors in the NBA Finals

This in-division trade seems more than worth the risk

Stopping short on Soto can and will be debated for years, but not improving pitching was not an option.

If a quiet Cardinals deadline comes and goes, these four familiar excuses will not work

Paying Florida's price would have required parting ways with some pillars, plural.

St. Louis had its shot at the legend, and it passed.

Bob Gravelle carries his St. Louligans scarf high as he marches into Hermann Stadium with other members of the St. Louiligans, a group of local soccer lovers, before St. Louis City2's first game in St. Louis on Friday, March 25, 2022.

St. Louis City2 coach John Hackworth takes his spot on the bench before the start of a game at Hermann Stadium in St. Louis on Friday, March 25, 2022.