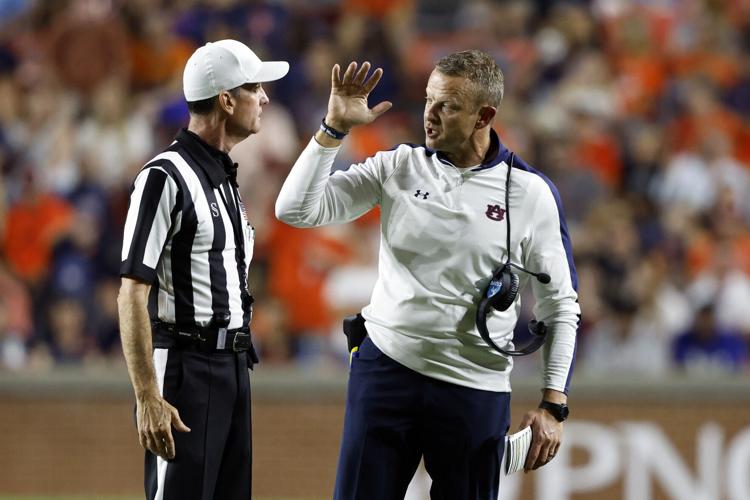 Auburn coach Bryan Harsin talks with referee Ken Williamson in a game against San Jose State on Sept. 10, 2022, in Auburn, Ala. 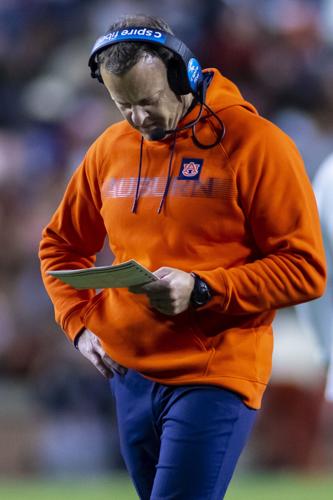 Auburn head coach Bryan Harsin paces the field during the second half of a game against Alabama on Saturday, Nov. 27, 2021, in Auburn, Ala.

It’s desperation week for the Tigers.

When Missouri and Auburn meet Saturday on the plains, they will see one another as a ripe SEC opponent on a schedule that isn’t guaranteed to produce many more.

Mizzou (2-1) has handled Louisiana Tech and Abilene Christian at home, but its blowout loss to Kansas State on the road in Week 2 managed to feel even worse after Week 3.

Kansas State lost its bite at home against Tulane. The Green Wave scored 17 points against K-State and allowed only 10. Eli Drinkwitz’s Tigers, in case you successfully have managed to wipe it from your memory, lost 40-12 — with their last six points coming on a garbage-time touchdown as time expired.

Auburn (2-1) thumped Mercer and barely squeaked by San Jose State, but then got embarrassed at home in the second half last weekend by Penn State. There was no rolling of Toomer’s Corner after James Franklin’s Nittany Lions punished the Tigers 41-12. Just gnashing of teeth. Plus plenty of calls for second-year coach Bryan Harsin to be handed his buyout money.

Harsin looked like a promising hiring when Auburn plucked him from Boise State. Suddenly he’s 8-8, and squarely on the hot seat. Perhaps the blue grass at Boise was greener than he realized. His Monday meeting with Auburn media was grim.

“I would categorize every Saturday as a must win,” Harsin said, via the Montgomery (Ala.) Advertiser. “I don’t really have an answer for you there. Yes? Any time you ask me that from this point on, yes, it’s a must win.”

Penn State scored touchdowns on each of its first four trips inside the 20-yard line. Its defense forced four turnovers and blocked star Auburn running back Tank Bigsby’s tracks, holding him to just 39 rushing yards and creating questions about why Harsin didn’t try to get him more touches so he could possibly break through. The loss marked Auburn’s most lopsided at home since 2012, along with its fifth straight loss to a Power Five opponent.

Auburn fans are not known for their patience.

Ask Gene Chizik, who was fired two years after winning a national championship. Ask Gus Malzahn, who now is enjoying the sunshine and sanity at Central Florida. It’s not dramatic to suggest Harsin could be out at Auburn if Mizzou wins this game.

Auburn fans won’t want to hear it, because they are obsessed with winning at all costs — see their allegiance to college basketball’s biggest fraud, Bruce Pearl, for evidence — but Penn State could be pretty good. I picked them as my sleeper for the College Football Playoff. If Auburn beats Mizzou and Penn State rolls forward in the Big Ten, perhaps Auburn’s last loss looks a little more palatable.

Mizzou hoped for a similar case with its no-show at Kansas State. Tulane spoiled that narrative. Kansas State is not a sleeper, it turns out. Kansas State now has to worry about proving Kansas (3-0) is not the best team in the state. And Missouri has to weather punch lines about hot starts from both rival KU and FCS Missouri State. (This would have been a bad season for MU to have Bobby Petrino’s Bears on the schedule.) Saturday presents a real opportunity — a chance to prove another SEC program is dealing with more misery.

Drinkwitz and Mizzou have helped shove SEC coaches out the door before. He danced on Dan Mullen’s Florida grave, lightsaber in hand, after a win against the Gators last season. Vanderbilt dropped Derek Mason immediately after a loss to Mizzou in 2020. Before Drinkwitz’s time, Bret Bielema was fired by Arkansas after a loss to Mizzou in 2017. Tennessee did the same thing to Butch Jones the same season.

If things go bad for Drinkwitz down the line, Jones’ time at Tennessee could become a comparison. Jones recruited really well. Then folks got to wondering why all of that great recruiting was not showing up better on the field. He managed back-to-back nine-win seasons, then the bottom dropped out. Now he’s at Arkansas State, following his stint in Alabama’s Nick Saban rehabilitation program.

Point is, in the SEC, it’s either get fired or get other coaches fired. And the only way for a coach to spend much time on the right side of that equation is by pushing his opponents to the wrong one.

Mizzou will have to bring a vastly improved product on the road compared to the loss at K-State to make Harsin’s life even harder, and Saturday’s environment at Jordan-Hare Stadium will be louder and more hostile than the purple-clad crowd at Kansas State.

Mizzou looking unprepared on the road is a trend that has to stop. The only SEC coach Drinkwitz has beaten on the road who is still employed? Vanderbilt’s Clark Lea.

This game against Auburn is Mizzou’s most winnable contest on paper until Lea’s since-improved Commodores come to CoMo on October 22. No. 1 Georgia and No. 20 Florida await before then.

This game against Mizzou is Auburn’s most winnable game on paper until . . . November 5? Harsin’s Tigers have LSU, No. 1 Georgia, No. 16 Ole Miss and No. 10 Arkansas in line before Mississippi State, and the Bulldogs are not bad.

Drinkwitz, right or wrong, will get more patience than Harsin. Especially if he can extend Mizzou’s list of opponent-coach ejections. Desperation will define the day Saturday, and the most desperate team probably will win.

Tipsheet: Reeling Auburn, doomed Harsin next up for wobbly Mizzou

Missouri football gave up nine tackles for loss, were penalized for holding five  times along the offensive line in 34-17 win over Abilene Christian.

The Tigers will take a close look at the offensive line this week in practice, could shake up starting five.

Auburn coach Bryan Harsin talks with referee Ken Williamson in a game against San Jose State on Sept. 10, 2022, in Auburn, Ala.

Auburn head coach Bryan Harsin paces the field during the second half of a game against Alabama on Saturday, Nov. 27, 2021, in Auburn, Ala.