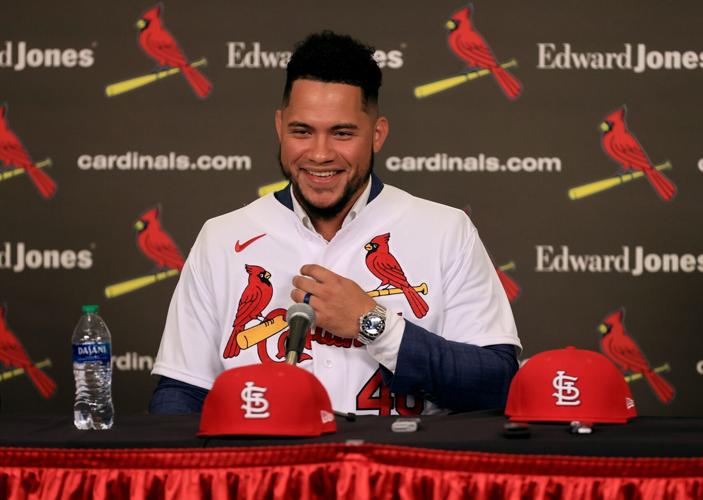 New St. Louis Cardinals catcher Willson Contreras smiles as he takes questions from the media during a news conference at Busch Stadium in St. Louis on Friday, Dec. 9, 2022. 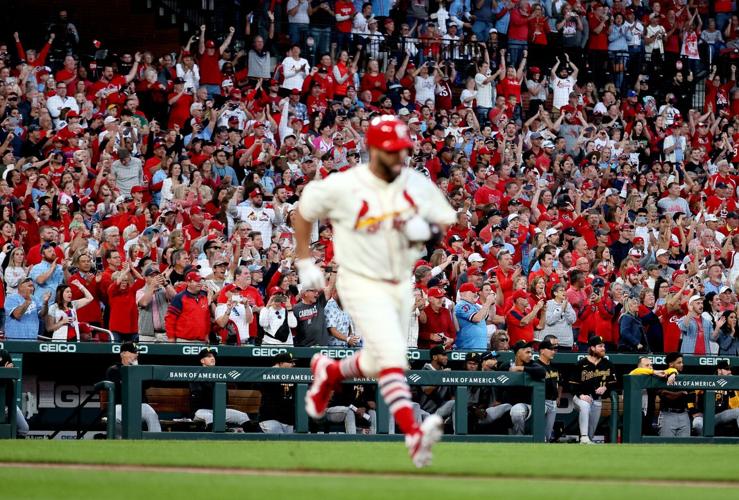 Fans stand and cheer as Cardinals designated hitter Albert Pujols runs to first on a two-run RBI single in the first inning against Pittsburgh at Busch Stadium on Saturday, Oct. 1, 2022. 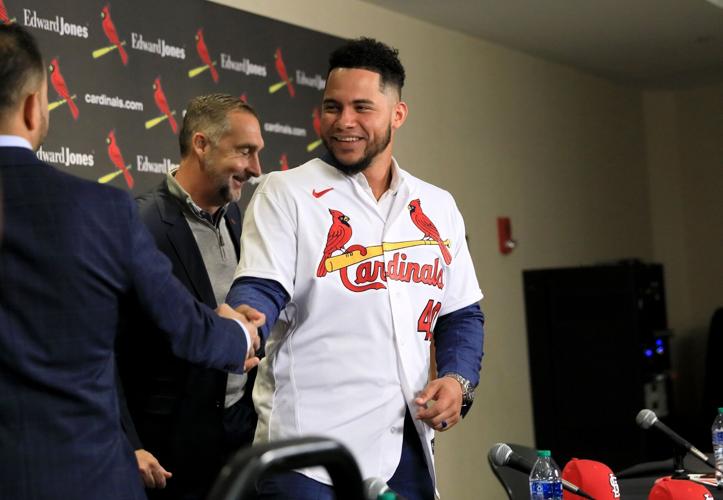 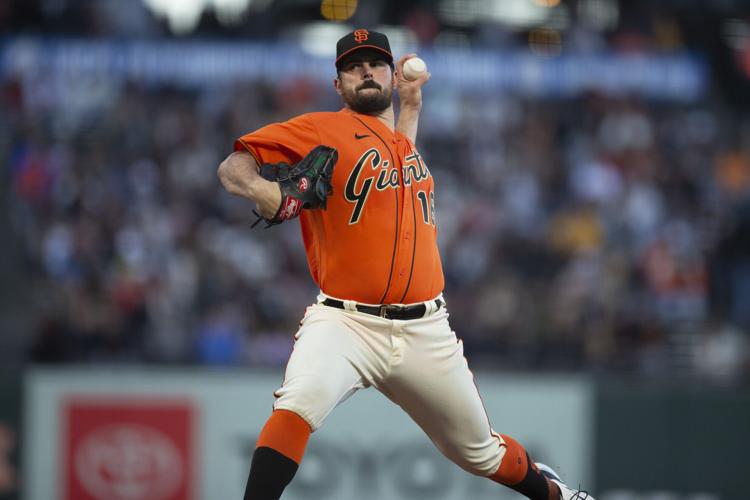 Giants starting pitcher Carlos Rodón delivers against the Pirates during the second inning on Friday, Aug. 12, 2022, in San Francisco. Some are speculating the Cardinals could be a mystery team in pursuit of Rodon’s services.

There was a phase not too long ago, Cardinals president of John Mozeliak recalled recently, when the desirability of joining the Cardinals could be questioned.

You will remember two noteworthy examples.

Jason Heyward broke the mold of so many players who spent time with the Cardinals then decided they wanted to stay in St. Louis. Instead, the outfielder departed for the Cubs in free agency entering the 2016 season despite the Cardinals’ efforts to keep him. His comments about the Cardinals' "aging core" ruffled feathers.

Giancarlo Stanton was not a free agent, but his no-trade clause gave him the choice to pick between the Cardinals and the Yankees, and he picked the Yankees entering the 2018 season. The Cardinals knew their chances were mostly shot when the slugger asked about the high-rise living options in The Lou.

“The reality is, you want people to have desire to be here,” Mozeliak said last week, after introducing Willson Contreras as the Cardinals' new catcher. “In the past, we have questioned: Has St. Louis lost a little bit of that edge? Not that this (adding Contreras) is the sole answer, but I think it’s encouraging players do want to be here. It speaks to the success of the organization.”

An update is overdue.

The Cardinals traded for Paul Goldschmidt and quickly struck an extension with the first baseman who has fallen for St. Louis and won his first ever National League MVP here. The Cardinals traded for Nolan Arenado, and he has since passed up not one but two chances to opt out and seek more money in free agency, including after this past season, when he joined teammate Goldschmidt in the top three of MVP voting. The Cardinals brought Albert Pujols home after his release from the Angels and rebound with the Dodgers, and that smart decision on a mere $2.5 million deal continues to pay dividends beyond the money earned at the gate.

As Pujols rounded third during his send-off season, I wrote there would be more benefits coming. Contreras is one. The catcher has described, in detail, when he first allowed himself to envision playing for the rival Cardinals. It was during Pujols’ 695th home run, as the future Hall of Famer rounded the bases while a delirious Busch Stadium went bananas.

“I can really feel the fan base support,” Contreras said. “A lot of players play for the fans. Without the fans, we are not the same — 2020 and 2021 showed that. I’m really excited to be here.”

“Sometimes it’s not just about money,” Mijares said. “The organization, if you talk with anybody, they will say they are here for so long. Twenty years. Twenty-five years. Everybody. The team drivers. The stadium workers. Good scene. Arenado doesn’t opt out from his contract. If he did, maybe he gets a lot more money. And he did not. There’s a reason, right? He (Contreras) wanted to be a part of that.”

Contreras, like Goldschmidt and Arenado, knows what it’s like to see a season's ceiling limited by a team’s disinterest in competing. The Diamondbacks didn’t want to reserve the cash necessary for a Goldschmidt extension. The Rockies’ lack of direction and desire to find one soured the relationship with Arenado, who just this past season became a division winner for the first time in his career. The Cubs never made the kind of commitment to Contreras that the Cardinals just did. That mattered to him. So much that he picked the Cardinals before he heard one team’s final offer.

“There was an enormous amount of momentum to get things done," Mozeliak said. “And that was really driven by Willson and his desire to be here. That speaks volumes.”

The Cardinals deserve praise for reviving a wavering reputation as a baseball destination.

They have a fresh example, in Pujols, of how there can be a special kind of magic in the air at Busch Stadium. They have a hip, young manager in Oli Marmol whose welcoming presence and infectious energy is an asset in free-agent meetings, like the one in Orlando on Nov. 30 that sold Contreras on the Cards before the money was even discussed. They have a clear goal of being relevant every season, and while Cardinals fans are understandably wanting that World Series wait to end — and nudging the front office to get even more aggressive — players know the Cardinals' problems are first-world problems compared with many other organizations.

Now, enough with the lovefest.

Because there is an important other part of this reality.

If the Cardinals’ appeal had been lessening, it’s back now, strengthened by multiple examples mentioned above. It’s time, now and moving forward, to take advantage of the sharpened strength. To play to it.

The Cardinals took a backseat to no team in their push for Contreras, and Contreras in turn prioritized St. Louis in his search. This should embolden the Cardinals to go get, say, free-agent starting pitcher Carlos Rodon, who has been a fit for the Cardinals all along — if they will pay the price. Some are speculating the Cardinals could be a mystery team in pursuit of Rodon’s services. There should be no mystery. The Cardinals absolutely need an arm added for the front of the rotation, not the messy middle. The Cardinals have the cash. Labor peace is here. The game is healthy and growing. Other National League teams are splurging. Pujols Palooza added extra coin to the Cardinals' coffers.

The only thing needed is for Cardinals chairman Bill DeWitt Jr. to say the word. He should be inspired by the appeal of his team and go make a splash for its biggest remaining need.

“Bill and I, we have discussed where we think our payroll will be,” Mozeliak said during winter meetings. “The good news is, working for Bill, it’s never written in ink. There’s some flexibility there.”

Now is no time for the Cardinals to settle or scrimp in areas of true need. They did not at catcher. They should not at the top of the rotation. Rodon would check the box. Chris Bassitt could have, too, but the Blue Jays just grabbed him on a three-year, $63 million deal. There are a few others options still out there. The need won't answer itself without action.

The World Series wait has gone on too long, and this team is a desirable one legitimate difference-makers want to join, as long as the offer is in the ballpark.

New St. Louis Cardinals catcher Willson Contreras smiles as he takes questions from the media during a news conference at Busch Stadium in St. Louis on Friday, Dec. 9, 2022.

Fans stand and cheer as Cardinals designated hitter Albert Pujols runs to first on a two-run RBI single in the first inning against Pittsburgh at Busch Stadium on Saturday, Oct. 1, 2022.

Giants starting pitcher Carlos Rodón delivers against the Pirates during the second inning on Friday, Aug. 12, 2022, in San Francisco. Some are speculating the Cardinals could be a mystery team in pursuit of Rodon’s services.