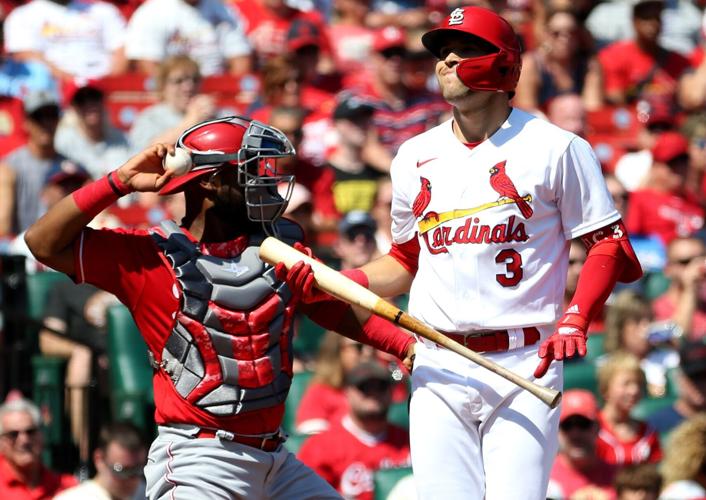 The Cardinals' Dylan Carlson strikes out, stranding two base runners, to end the first inning of the opener of a doubleheader against Cincinnati on Saturday, Sept. 17, 2022, at Busch Stadium. He was benched for Game 2 of the Cards' 2022 wild-card playoff series. 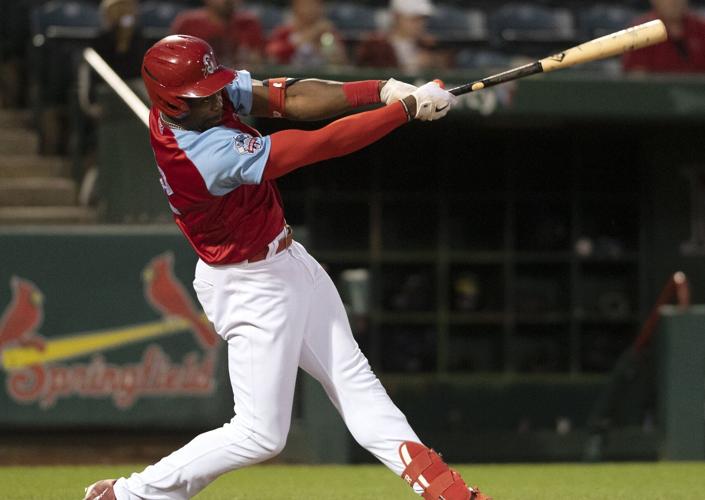 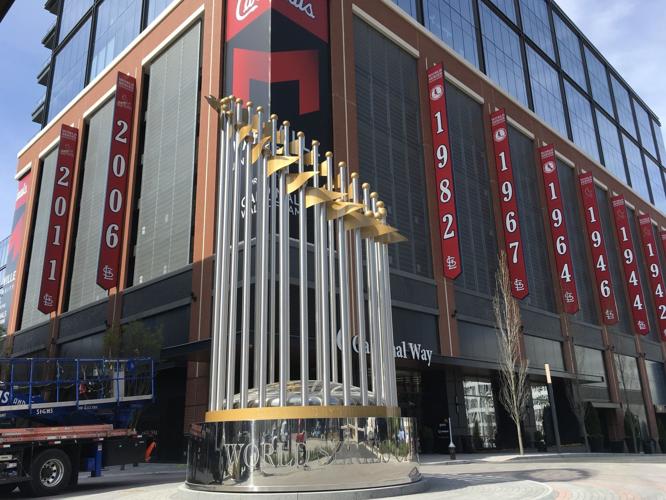 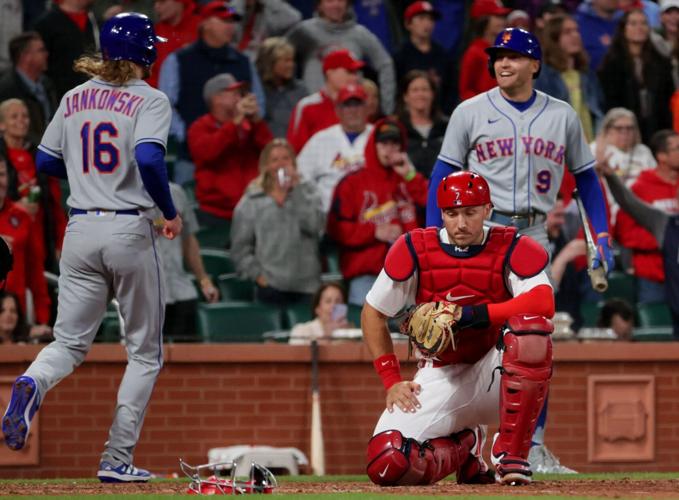 Cardinals catcher Andrew Knizner takes a breather after the Mets scored in the ninth inning on Monday, April 25, 2022, at Busch Stadium. Behind him are Mets outfielders Travis Jankowski and Brandon Nimmo.

It’s natural to feel like speeding past the pain of another early postseason ejection for the Cardinals and fast forward to free-agent shopping for 2023, but some examination of components that contributed to another October collapse should occur first.

Before fans whip themselves into a frenzy about which players the Cardinals should add — some will be realistic, some will not — their favorite team needs to take a long, hard look at how a regular season filled with history made and fun moments produced derailed immediately in the National League Wild Card round despite having the series at home.

Some uncomfortable numbers stand out ...

-1.4: There will be no objection here to the Cardinals benefiting from upgrading in the rotation, at shortstop and in the outfield, but overlooking catcher would be unwise.

Yadier Molina is not walking through that door again, and his performance had been dwindling in his final seasons. The internal options did not fill the growing void very well. This was supposed to be Andrew Knizner’s season to prove he could. He didn’t, not definitively, despite starting 78 games to Molina’s 71. His pitch-framing metrics are some of the worst among regular catchers, and his offense did not consistently show the benefit of increased playing time. He averaged .215 with a .301 on-base percentage and a .300 slugging percentage.

Zero: The outfield Cardinals manager Oli Marmol started in Saturday’s elimination loss to the Phillies featured not one name from a trio of players they believed would shine this season. Harrison Bader is a Yankee now, traded for Jordan Montgomery. Dylan Carlson’s struggles against right-handed pitching led to him starting Game 2 on the bench. Oft-injured Tyler O’Neill was taking at-bats in the Arizona Fall League during Game 2 as he tried to prove his hamstring would hold up if the Cardinals advanced.

Bader’s gone. O’Neill’s occasional hot streaks almost always are shortened by a slump or another injury. Carlson has not yet proven definitely he can be an every-game starter.

Lars Nootbaar and Juan Yepez helped their cases. Alec Burleson got a taste. Brendan Donovan and Tommy Edman can play in the outfield depending on which direction the Cardinals go with offseason moves.

A home run in Arizona echoed all the way to St. Louis during Game 2. It wasn’t hit by O’Neill. Cardinals top prospect Jordan Walker, who spent the tail end of his encouraging season getting reps in the outfield, sent a ball flying 423 feet. He hit another AFL homer Monday. No one in this outfield deserves to be cemented as a starter at this time. Walker deserves to get his shot at what has become a constant Cardinals outfield churn.

4: The big replica of the Commissioner’s Trophy in Ballpark Village has a new layer of dust today.

Since 2016, the Cardinals’ biggest postseason accomplishment has been winning a 2019 NLDS series against the Braves. They won no games against the eventual champion Nationals in that season’s NLCS. They have either missed the postseason (2016, 2017, 2018) or found themselves bounced from the wild-card game or series (2020, 2021, 2022) every other season during this seven-year window.

During this span (2016-22), the Cardinals rank second in the National League in regular-season wins (561), trailing only the mighty Dodgers (653). Impressive. But their four postseason wins during this time — three against the Braves in that victorious 2019 NLDS and one against the Padres in a lost wild-card series in 2020 — rank in a three-way tie for sixth place in the NL. Teams ahead of them still are alive in this postseason’s bracket, and teams behind them are gaining ground.

The Dodgers (44 postseason wins since 2016) and the Braves (22) are just now starting postseason play after first-round byes. The Nationals (16) and Cubs (15) have more recent championship runs. The Brewers (seven) join the Cubs ahead of the Cardinals among NL Central foes. The Cardinals (four) and Giants (four) could be pushed down the list by the still-playing Padres (four) and Phillies (two).

The postseason has plenty of random elements. This trend is not random. Fans hungry for a 12th World Series championship, including some of the same ones who helped the Cardinals rank second in attendance in 2022, would appreciate getting a sense from Cardinals chairman Bill DeWitt Jr. that he is fed up by the October frost.

17: Saturday’s 2-0 elimination loss to the Phillies marked the Cardinals’ 17th shutout loss of 2022. (Fourteen of them began with a right-handed starter taking the mound for the opponent.) Below are the five MLB teams (and their records) that got shut out 15-plus times this season. Only the Cardinals made the postseason. Only the Cardinals won 75-plus games. This is not the kind of company you want your lineup to be in.

Figuring out how and why a lineup that included two potential top-two National League MVP finishers (Nolan Arenado and Paul Goldschmidt) got blanked so often seems significant.

Cardinals hitting coach Jeff Albert was hired entering the 2019 season. Since then, the Cardinals have played 15 postseason games. Eight of those games have been losses in which they scored one or zero runs.

If it’s not the hitting instruction, it’s the hitters. Something’s got to give.

In today’s 10 a.m. video, columnist Ben Hochman discusses the top-10 homers by Albert Pujols (of his 24) this season. Plus, a happy birthday s…

The Cardinals' Dylan Carlson strikes out, stranding two base runners, to end the first inning of the opener of a doubleheader against Cincinnati on Saturday, Sept. 17, 2022, at Busch Stadium. He was benched for Game 2 of the Cards' 2022 wild-card playoff series.

Cardinals catcher Andrew Knizner takes a breather after the Mets scored in the ninth inning on Monday, April 25, 2022, at Busch Stadium. Behind him are Mets outfielders Travis Jankowski and Brandon Nimmo.