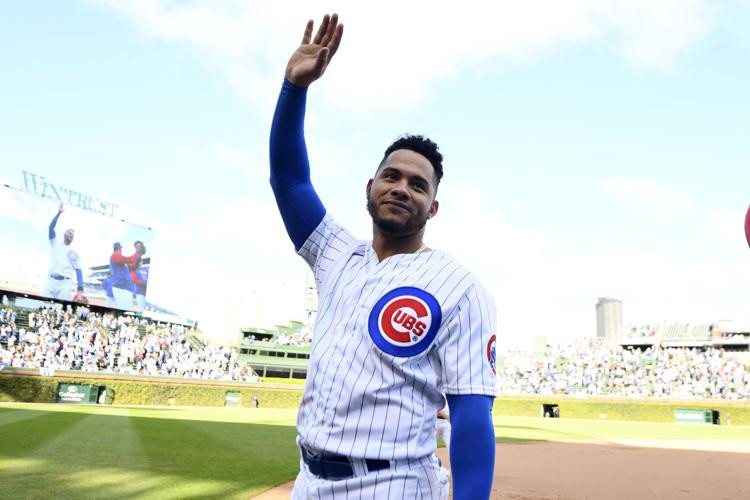 Chicago Cubs' Willson Contreras waves to the fans after a baseball game against the Cincinnati Reds, Sunday, Oct. 2, 2022, in Chicago. 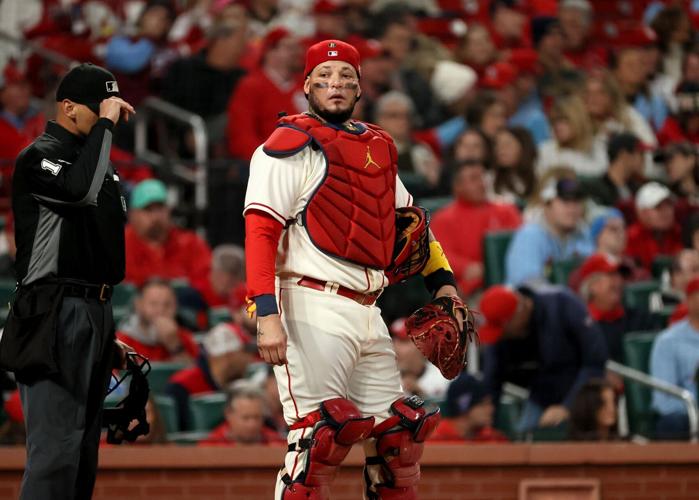 Some forget former Cubs third baseman Kris Bryant — “St. Louis is boring” — was not the first North Sider to irk now departed and future Hall of Fame Cardinals catcher Yadier Molina due to an offseason comment.

Remember the Cubs Convention drama that briefly bubbled in 2018?

Cubs catcher Willson Contreras, who had emerged during the Cubs’ World Series championship season in 2016, had one ring, two seasons beneath his belt and a growing confidence about his career arc.

So much so that he suggested to a reporter he could one day pass greats like Buster Posey and Molina.

Molina turned to Instagram to give the then 26-year-old Contreras a reminder. Respect your elders. The message was received.

The two catchers cleared the air. A positive relationship developed. It was Molina, after all, who Contreras had studied for tips and tells on how to become a cornerstone catcher, a role he hoped to hold in Chicago forever after growing into a three-time All-Star there. If the Cubs are now unwilling to give the free agent the commitment required to let him fulfill that role, and it sounds like they are, the Cardinals should strongly consider benefitting from the Cubs’ loss.

Everyone has an opinion about what the Cardinals need to prioritize on their offseason shopping list of trades and free-agent signings. Between the combination of holes in the roster and versatility of players set to return, a compelling case can be made to improve every spot but first and third base. A high-level starting pitcher with strikeout punch would elevate the postseason profile of the rotation. Albert Pujols is gone from the list of designated-hitter options, leaving a gap. Shortstop could be a play if Tommy Edman shifts elsewhere. The outfield is unproven, again.

From this view, none of the potential upgrades are more important than one mandatory upgrade: catcher.

Molina’s bumpy final season proved an uncomfortable fact. The Cardinals’ in-house options, Andrew Knizner and Ivan Herrera, are not quite ready for the full-time spotlight. More proven help is needed for 2023, no matter how things shake out for Knizner and Herrera down the line. If the Cardinals had an in-house candidate ready, we would know it by now. It would have been made clear when Molina spent time away from the team. Maybe isn’t a definitive answer. Adding a catcher of impact is a must.

For more than a few reasons.

His bat. Since 2019, Contreras’ 74 home runs rank fourth among MLB catchers. He’s posted a .349 on-base percentage and slugged .467 during that span, and is one of just four catchers during that time to log more than 1,000 plate appearances while posting an on-base plus slugging percentage (OPS) above .800. The Cardinals, during this same window, ranked 27th among MLB teams in catcher-supplied OPS (.633). Contreras, according to adjusted on-base plus slugging percentage (OPS+) has produced just one below-average offensive season in seven years. Last season he posted a career-high 128 OPS+, which is 28 percentage points better than league average. His career average OPS+ is 115. He’s not a creation of Wrigley Field, either. The right-handed hitter produced an OPS of .809 on the road last season and cranked out an OPS of .828 against right-handed starters, which would be welcomed by a Cards lineup that can go dark against righties. Don’t forget the designated hitter exists. Contreras could log DH reps when he’s not catching as the Cardinals modernize playing time at the position following Molina’s marathon run.

His arm. It’s true Contreras has never won a Gold Glove. He can’t match Molina’s defensive prowess. Few can. Molina since 2018, per Fielding Bible’s version of Defensive Runs Saved, was 14 runs above average behind the plate. Contreras during the same span is a plus-10. So, some of the takedowns of his defense are a bit overblown. Contreras’ rocket arm is a big help. MLB just increased the size of the bases as a way to encourage steals. More attempts to stoke baserunning fire could be coming. Having a strong-armed catcher is important. The Cardinals had one in Molina. Contreras checks the box.

His cost. It will be significant, sure, but not impossible. Contreras did not get traded at the deadline, offering an early read on his potential market, and he is going to be attached to a draft pick after he declines the Cubs’ qualifying offer. He has to know how that will cut into his contract options. Plus, he’s past his age-30 season at a challenging position. He’s going to get paid well. But he’s not free agent shortstop Trea Turner, who will command a contract amount and length the Cardinals tend to avoid. The Cardinals can afford Contreras, and more. What they can’t afford is talking themselves into a middle-shelf catcher addition that leaves them with a bigger pool of players at the position who are not ready for the big stage.

His interest. Contreras has asked around about the Cardinals. He knows what catchers mean to the organization. He’s found out what they don’t mean to the Cubs. He needs a club that values the job and likes keeping key players around. One of the legends he once longed to compare himself to left a hole he could help fill.

Bill DeWitt Jr. preached fiscal responsibility. But after Pujols-palooza and a sendoff tour for Molina, the Cardinals have no excuse to cut financial corners this offseason.

Yankees fans are no longer grumbling about the Jordan Montgomery trade with Harrison Bader's postseason emergence.

The Cardinals could’ve made an offer for Bryce Harper, now he of the prodigious homer. Same for Philadelphia pitcher Zack Wheeler.

St. Louis Cardinals manager Oliver Marmol looks back on the postseason series vs. the Philadelphia Phillies and his pitching decisions.

Chicago Cubs' Willson Contreras waves to the fans after a baseball game against the Cincinnati Reds, Sunday, Oct. 2, 2022, in Chicago.