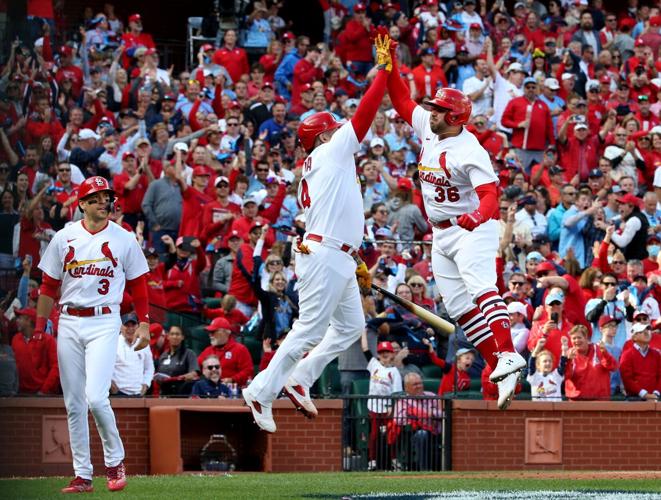 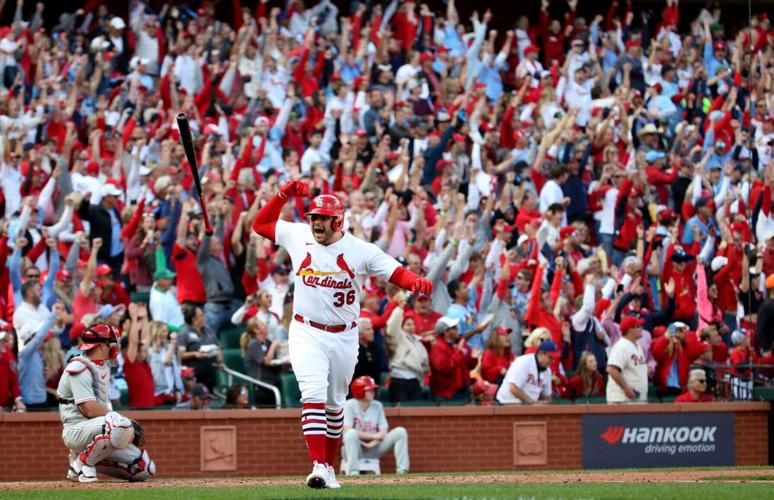 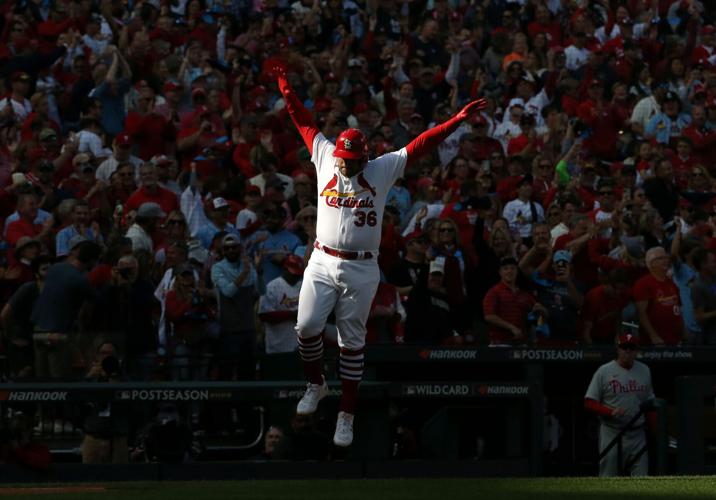 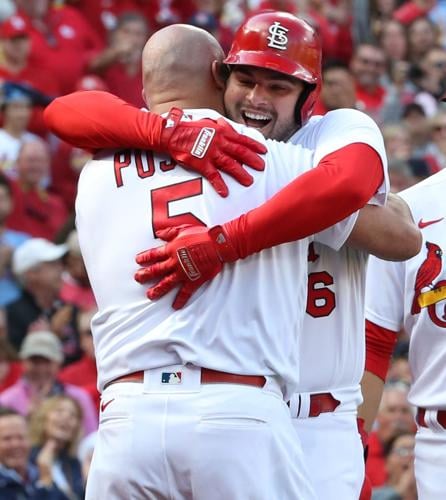 The Cardinals' Juan Yepez (36) celebrates his two-run home run with Albert Pujols (5) in the seventh inning of game 1 of the National League Wild Card series against the Philadelphia Phillies on Friday, Oct. 7, 2022, at Busch Stadium.

Did you see him soar?

Before Cardinals closer Ryan Helsley’s stiffening finger flipped the game, and before an offense’s chill surrendered a series, the defining moment of the first game of the National League Wild Card between the Cardinals and the Phillies, for one fleeting moment, was rookie Juan Yepez leaping for joy.

Yepez lifted off, flying Air Jordan style to give teammates high fives in the sky after he crossed home plate. The Cardinals were leading 2-0 in the seventh inning. They were six outs away from starting a best-of-three series one up. Juan up, and every Cardinals fan in Busch Stadium followed his lead.

Manager Oli Marmol had plucked the rookie off the bench for a pinch-hit chance against left-handed Phillies reliever Jose Alvarado. Yepez had turned on the first pitch, a 92 mph cutter, and deposited it just to the fair side of the left-field foul pole.

After watching a 2021 wild-card loss to the Dodgers from the dugout without ever getting a chance to swing, Yepez proved he needed just one cut to change a postseason game. When he emerged from the dugout for a curtain call and fired up the Busch Stadium crowd, energy reached its highest point.

How things unraveled from there pushed Yepez from the front page, and understandably so. His home run became the only extra-base hit the Cardinals mustered in their latest in-and-out postseason. Where the Cardinals go from here is now the big story. But haven’t we learned enough about Yepez to feel good about him being part of whatever comes next?

Let’s take a moment to remember how the 24-year-old’s season started.

Yepez arrived at the Cardinals’ spring training complex hoping to prove he could be the right-handed hitting option for the designated hitter role. An opportunity that seemed there for the taking slipped from his grip as momentum toward an Albert Pujols reunion grew. Soon after Pujols arrived at Roger Dean Stadium, Yepez was hit in the face with a pitch. He got three stitches in the chin and a ticket to Memphis. Ouch.

It was around this time when Marmol called Yepez into his office. The manager told the hitter with little left to prove in Class AAA that he had a decision to make. Losing his spot on the team to one of the greatest right-handed hitters of all time was nothing to hang his head about. Not using every minute around Pujols to soak in his wisdom would be.

Yepez stuck by Pujols’ side. He departed camp with his head held high. He and Pujols talked often while Yepez worked away in Memphis, proving once more his bat was major league ready.

When Yepez got the call in early May, he transitioned well, averaging .254 and slugging .459 in 209 at-bats through mid-July while juggling multiple roles: left field, right field, some first base and designated hitter.

Then, another bad break.

“The hardest point was when I got hurt,” Yepez said. “It took longer than expected to come back.”

A combination of recovery, rehab and waiting his turn after a right forearm strain kept Yepez from a single start between July 15 and Sept. 21. He rejoined the team late and averaged .256 over his final 43 at-bats of the regular season, performing well enough to make the postseason roster but not forcing Marmol’s hand for a start. Until he smacked that Game 1 pinch-hit homer. Yepez started the Cardinals’ Game 2 loss. After it ended in defeat, he struggled to put in words what the opportunity meant to him.

“I could talk about it for 30 minutes, but I’ll simplify it to 30 seconds,” Marmol said. “He hit that homer, and Albert comes up behind me and gives me a big hug and goes, ‘The kid’s listening.’ You track that back to spring training. Hey Yeppy, here’s what you’ve got to do. You just lost your job, but the good thing is, you’re losing it to a Hall of Famer, OK? So here’s what I suggest. You can pout about it. That’s not a good option. Or, you can ask him every question you could possibly want to know. And at some point, you’re going to play together, and you can suck in as much knowledge as possible from this guy, because you have ability, but the separator for you is not going to be ability. It’s going to be approach and mentality. See how much you can gain from your time with him. And here we are.”

Add Yepez’s name next to Brendan Donovan and Lars Nootbaar on the list of position-playing youngsters the Cardinals should factor into their plans for next season. Fast-rising prospect Jordan Walker is on that list, too, and perhaps at the top of it. Just don’t let Yepez get lost in the shuffle.

He won’t win any Gold Gloves in corner outfield, but he can sneak by out there and at first base in small doses. More importantly, he can be a part of the designated-hitter solution if the Cardinals continue to treat the position as a timeshare. Yepez’s 12 regular-season homers made him the only Cardinal with fewer than 300 plate appearances to reach double-digit homers. His season-long .447 slugging percentage led all Cardinals rookies. He received the third-most shots at DH reps in 2022, trailing only Pujols and Paul Goldschmidt, and slugged .486 in those 72 DH at-bats. And despite being a right-handed hitter, he hits righties well in a lineup that struggles to do just that. His performance should improve if he can be a little more selective in his plate discipline. Good signs are there.

Yepez’s big moment in Game 1 will fade from long-term memory because of the sour ending that followed. What he quietly accomplished this season after accepting a role in Pujols' shadow, though, should bode well for what could come for him.

The Cardinals' Juan Yepez (36) celebrates his two-run home run with Albert Pujols (5) in the seventh inning of game 1 of the National League Wild Card series against the Philadelphia Phillies on Friday, Oct. 7, 2022, at Busch Stadium.