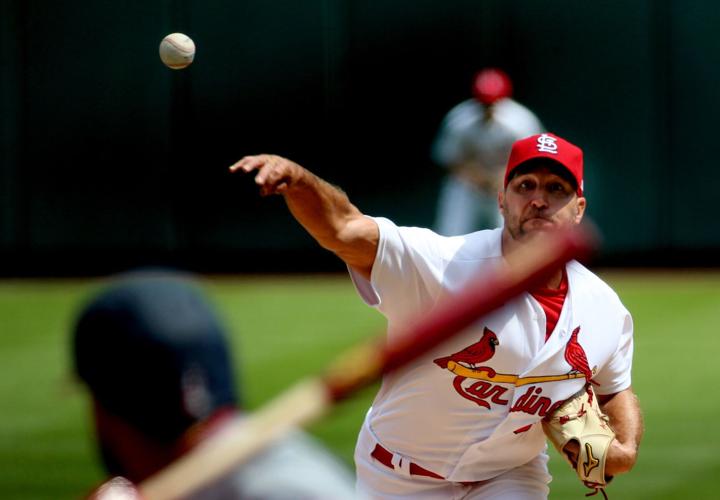 Cardinals starting pitcher Adam Wainwright goes to work in the first inning of a game against the Nationals on Thursday, Sept. 8, 2022, at Busch Stadium. 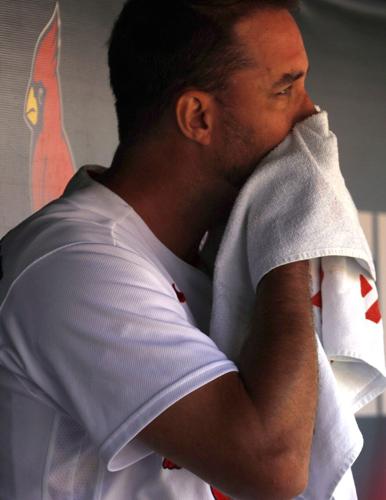 Cardinals starting pitcher Adam Wainwright sits in the dugout after the Nationals took a 4-3 lead in the fourth inning on Thursday, Sept. 8, 2022, at Busch Stadium.

Inside Pitch: Which Cardinals can make themselves irreplaceable before the postseason arrives?

For the second time in back-to-back starts shared by Adam Wainwright and Yadier Molina, the steady starter who has helped carry the Cardinals all season was boosted by the catcher who is in the process of overshadowing a bumpy sendoff season with one final surge.

Molina’s two home runs — one lofted and another leveled — had helped the Cardinals tie the game by the time Wainwright exited. Reliever Andre Pallante was tagged with the loss in what became an 11-6 defeat in a series split against the done-for Nationals. None of that softened Wainwright’s harsh self-review.

What was supposed to be a victorious celebration of Wainwright and Molina tying the all-time MLB record for starts made by battery mates (No. 324) became a little more muted due to Wainwright’s turbulence.

His delivery, he said, stinks at the moment. His bottom half and top half are not synced. He’s leaving too much over the middle of the plate, and those signature pitches that are supposed to hug the edges of the strike zone are missing by too much for Molina to frame for strikes. Everything from when his hands separate to how his arm swings is now under review.

Manager Oliver Marmol said he and his staff started digging in immediately after the game. Wainwright had already started. There is reason for urgency.

Wainwright has allowed eight earned runs on 18 hits over his past two starts. Both were at home, where he usually excels. Both were five-inning appearances.

“I’ve had to fix these things 100 times before,” Wainwright said.

And fix them, he has.

Before you worry too much about Wainwright — for some, I realize it’s too late — here is some information to consider:

The spin rate on his curveball this season is in the league’s 86th percentile. It’s still one of the most effective pitches out there. His opponent barrel percentage (6%) is as low as it’s been since 2017. His walk rate (6.5%) is very low, and his strikeout rate (19.2%) remains solid, especially for this Cardinals staff.

Wainwright is a pitcher in a league full of throwers. His success this season is no fluke. It wasn’t last season. Or the season before. Since the pandemic-affected 2020 season made baseball all sorts of unpredictable, Wainwright has been one of the game’s most reliable starters. Between then and now, he leads the game in innings pitched while ranking in the top 10 among starters in ERA (3.13). He’s crammed 45 quality starts — at least six innings pitched and three earned runs or fewer allowed — into those 70 chances, including 16 quality starts in 28 games this season. If you believe the FanGraphs value projector, his post-pandemic performance has been worth $60 million to the Cardinals. He’s made roughly half of that.

Especially when you consider the context of 2022.

Steven Matz and Jack Flaherty got hurt. Pallante ran into an innings ceiling that encouraged a shift back to the bullpen. Dakota Hudson wrestled with his frustrating return from Tommy John surgery. The Cardinals needed not one but two starters added at the trade deadline. Miles Mikolas earned an All-Star appearance, and deservedly so, but where would the Cardinals be without Wainwright? In big trouble. It’s part of the reason I hope Wainwright and the Cardinals sign up to do this over again in 2023. As long as he corrects what needs correcting, there is no reason to assume he can’t help lead this rotation again in 2023.

He has to want that, of course. He’s playing his cards close. How the season ends could affect things, of course. That’s a later question. First, Wainwright needs a present answer.

If the outside fretting has not yet started, it will soon. Wainwright is 41 now. Two consecutive starts have been rough. His second-half ERA is up to 3.92 from 3.00 before the break. He’s always so good at home, but his past two home starts have been so blah.

Wainwright needs to find his September footing. He knows it. He’s hunting. And the Cardinals, thanks to their strong play as of late, are in a place that can help him find it. The benefit of positioning yourself so a mad dash is not required to make the postseason field is that common sense can be baked into the pursuit of a first-round bye.

If Wainwright needs to work through things on the mound in live action, you let him. If he needs to skip a start to focus on bullpen sessions, you let him. He stressed Thursday that he needs to continue pitching in games to get right. He knows best.

Wainwright and Molina need one more start together to secure an incredible top spot in baseball history. Then it will be time to really prioritize getting Wainwright right for the postseason. The record these two are going to set will probably never be touched. It’s a testament to both being able to fix themselves time and time again.

Molina is doing it before our eyes.

Wainwright has countless times before, and he can again.

Inside Pitch: Which Cardinals can make themselves irreplaceable before the postseason arrives?

How it all began: Molina and Wainwright's first start together

Goold: Jordan Montgomery is taking advantage of all the Cardinals have to offer

Cardinals' Pujols was punchless, hitting .198 in July — but just take a look at him now

He has returned for one last run at a championship and it's been a blast from the past. Home run No. 696 ties him for fourth place all-time.

Cardinals starting pitcher Adam Wainwright goes to work in the first inning of a game against the Nationals on Thursday, Sept. 8, 2022, at Busch Stadium.

Cardinals starting pitcher Adam Wainwright sits in the dugout after the Nationals took a 4-3 lead in the fourth inning on Thursday, Sept. 8, 2022, at Busch Stadium.