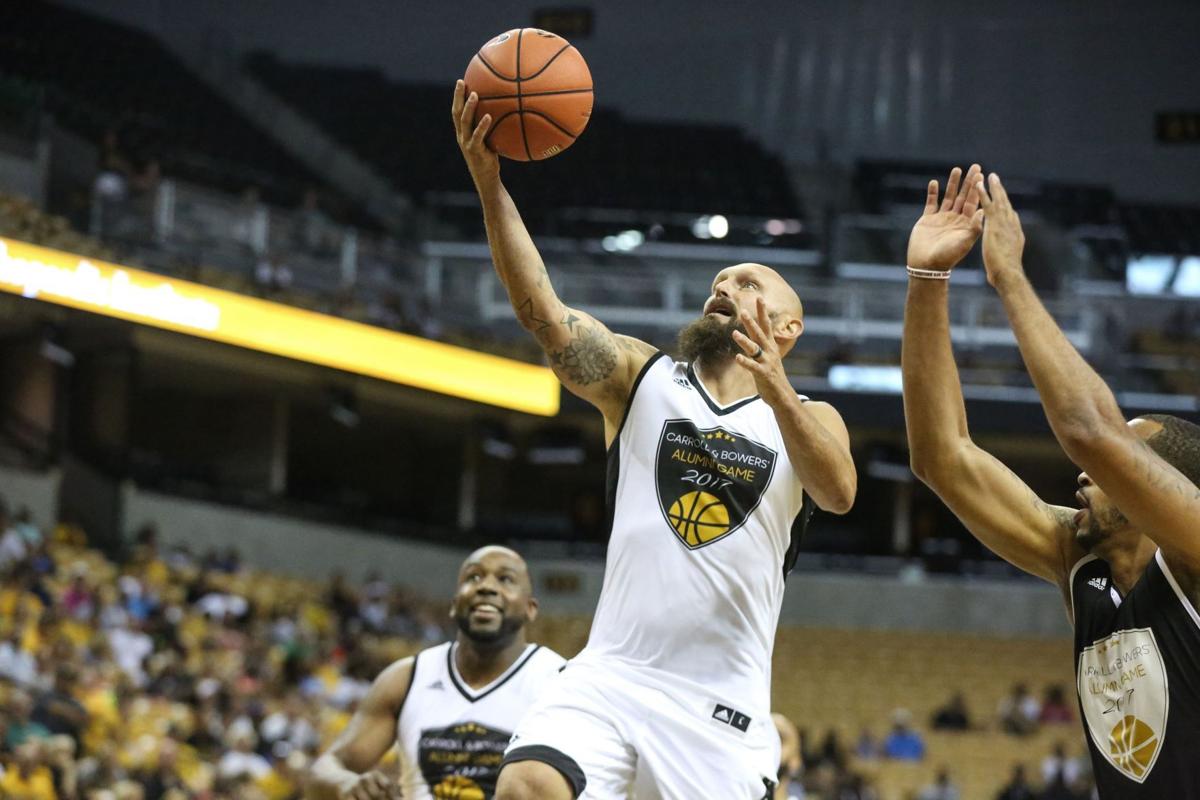 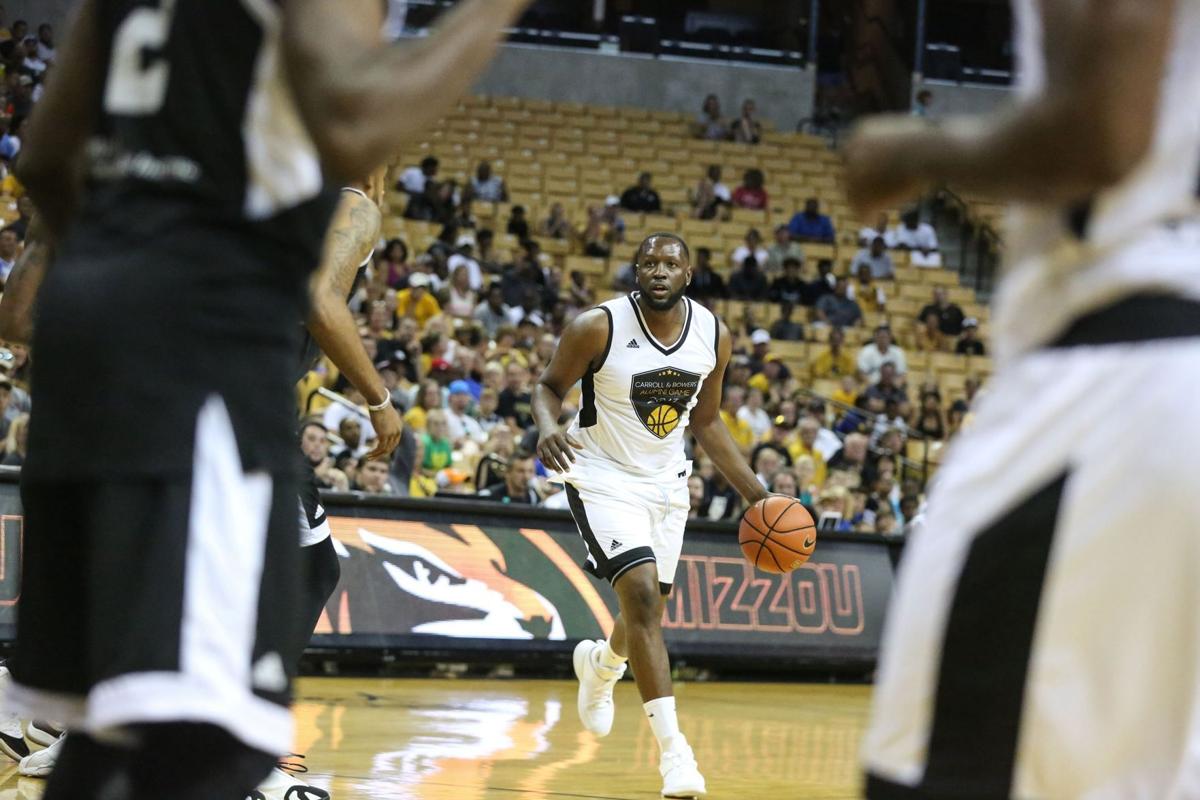 Jimmy McKinney looks to make a pass during an alumni game at Mizzou Arena on July 22, 2017. (Photo by Caroline Hall, Mizzou Athletics)

COLUMBIA, MO. • Laurence Bowers is a good man to follow.

I learned this on one of the worst days of Bowers’ life. It was October 4, 2011, and the lanky forward had just received confirmation from doctors that the knee injury he suffered during a pickup basketball game was indeed a torn ACL. He would need surgery. He would have to watch what was supposed to be his senior season from the sideline.

That same day, Bowers was scheduled to read to children at the Columbia Public Library. The person who arranged the visit had heard the injury news. She figured Bowers wouldn’t show. She didn’t know Bowers.

He came, on crutches. He folded his 6-foot-8 frame into a too-small chair. He read “If You Give a Mouse a Cookie.”

I can’t help but recall this story every time I see Bowers, and it came rushing back Saturday, because there was Bowers leading by example once again. He wasn’t alone. Twenty-two former Mizzou football and basketball players ran (some more gracefully than others) up and down Norm Stewart Court for a charity alumni game organized by Bowers and his former Mizzou teammate, DeMarre Carroll. And I’m not kidding when I tell you the size and passion of the crowd beat what was witnessed in some actual games here last year.

“The University of Missouri just won,” Bowers said after his team lost to Carroll’s team 137-116. “And Columbia just won, with us being able to bring back all these people and create a positive event.”

Positivity is Bowers’ thing. It’s why he and Carroll decided to do something about the lack of it in Columbia. Their idea started stirring as the football and basketball teams struggled. On top of that, racial unrest on campus had resulted in protests, the football team’s threat of a boycotted game, the toppling of university leaders, the fierce and tiresome debate about who should be blamed for it all.

“As a black male, all the stuff that happened, it kind of hits hard,” Bowers said. “It was disappointing, what happened, the racial slurs and all that stuff. We don’t need that. And I’m not turning a blind eye to it. Because I know that it happens.

“But I do think that some things are blown out of proportion. We can’t fix that. We can’t change that. That’s in the past. All we can do now is just move forward and try to do things like this to put that behind us.

Bowers and Carroll aimed to change the tune. The buzz created by new basketball coach Cuonzo Martin’s signing of star recruit Michael Porter Jr. beat them to it. Even better.

“We just wanted to aid that, support that,” Bowers said. “Getting the football guys involved, that was good.”

Saturday’s game wasn’t just about raising money for worthy charities. It was also about reminding Mizzou what it can be.

“We wanted to come back and try to help build this community back up,” Carroll said.

They needed help, and they got it. How about some of these names?

There was Brian Grawer hitting his first 3-pointer in Mizzou Arena, and Jimmy McKinney without his signature facemask. Pro linebacker Sean Weatherspoon showed a nice touch from behind the arc, which is a sentence I never thought I would type. Rickey Paulding can still slam. Ricardo Ratliffe dropped a game-high 39 points. Jerrell Jackson dropped jaws with a 360-degree slam dunk.

And kids, that guy your folks screamed like crazy for during pregame introductions was the one and only Melvin Booker. The former All-American and Big Eight player of the year opened the game with a swish and finished with 13 points.

“I had a great time seeing old fans — and hearing how old I am,” Booker said with a smile.

The man who sits seventh on the Tigers’ all-time scoring list (1,697 points) echoed a sentiment shared by many of the former players. It’s time to turn the page, and Martin’s new-look basketball program might be the next chapter.

“You can see the fans are thirsty to get back to where they used to be,” Booker said. “Everyone is excited about the upcoming season. I know I am really excited to see Cuonzo and Porter Jr. You will probably see my face in here more now.”

Oh yeah, Porter Jr. was watching from the stands with his team. And his younger brother, Jontay, was sitting with the Tigers, too. I will eat this column if the talented big man doesn’t reclassify and play for the Tigers this season.

But pressing refresh on a university’s image is bigger than the Porter brothers, and bigger than Barry Odom’s record in year two. These guys know that.

They also know football and basketball are the university’s doorstep, that improvements in these areas can have a significant and measurable ripple effect. Sports unite. Especially when teams win.

Weatherspoon hit this point harder than a running back.

“We need to be focused on being brothers and showing people how to love each other, regardless of where we came from,” he said. “Ball is what brought us all here. We are not ball. It is not who I am. It’s not who these guys are. But it is a part of us. It put us here. That’s why I was here today. Because of a football. A basketball brought all those guys together. It intertwined us all. We show that we can coexist. We love each other. That’s what we have to teach our kids. That’s the example that we have to send to the younger generation. We have to show them it’s all about love.”

Thanks to Bowers and Carroll, Saturday was a step in the right direction for Mizzou.

From quarterback Drew Lock's next step to coach Barry Odom's rattled defense, these are the questions the Tigers must answer to snap their bowl drought.

Jimmy McKinney looks to make a pass during an alumni game at Mizzou Arena on July 22, 2017. (Photo by Caroline Hall, Mizzou Athletics)