Subscribe
Read Today's E-Edition
Share This
BenFred: Departure of Cardinals coach Jeff Albert a reminder thick skin must be part of uniform
0 Comments
Share this
1 of 2 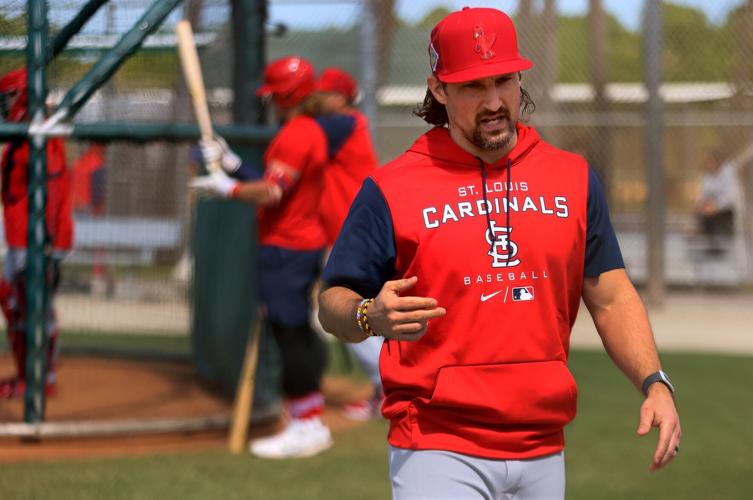 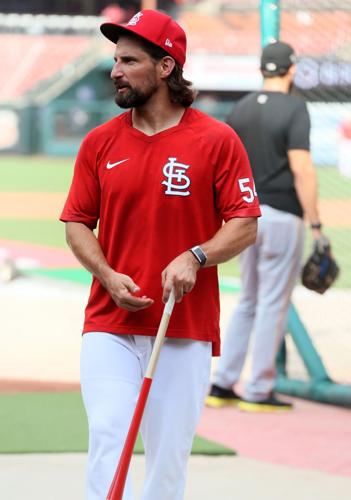 Cardinals hitting coach Jeff Albert talks to visiting coaches on Friday, June 25, 2021, before a game against the Pirates at Busch Stadium.

Wanted: A Cardinals hitting coach who can help snap what has become a postseason freeze.

Mandatory requirement: Must be able to handle a hot-topic assignment for a team with a fanbase that is passionate, vocal and, yes, somewhat crazy.

Former Cardinals hitting coach Jeff Albert did some good things for the organization during his much-discussed four seasons here, but a return to the organization that began with an awkward distraction — remember the Astros sign-stealing scandal? — has now concluded in an odd departure.

It wasn’t the continued trend of quiet bats in the postseason that led to the Cardinals parting ways with Albert.

The Cardinals, according to president of baseball operations John Mozeliak, were prepared to offer the hitting coach a new contract as his current one expired this offseason.

But Albert instead chose to walk away, a decision Mozeliak at Wednesday’s season-ending news conference characterized as Albert being motivated to turn the page in large part because of criticism he received.

Not criticism within the organization, Mozeliak stressed.

Criticism from beyond it.

Mozeliak has been quick to defend Albert since hiring him back to the Cardinals from Houston entering the 2019 season, when grand hopes were debuted about Albert modernizing the way the Cardinals taught, thought and talked hitting.

Mozeliak went to bat for Albert when the Astros sign-stealing scandal broke, distancing the hitting coach from the fallout before Albert did so himself.

Praise of Albert was deemed correct and deserved when anything good happened with the offense, whether here at the major league level, or down below in the minors, where Albert’s philosophy was put into play.

Questioning of Albert when things did not go great — especially when a Cardinals hitter went into a long downward spiral — was labeled as either misleading spin or a misunderstanding of Albert’s highly complicated, far-reaching role.

Good gig, if you can get it.

The team finally acknowledged some so-called communication issues but made their stance clear. Staff members who clashed too often with Albert, whether it was previous assistant hitting coach Mark Budaska or previous manager Mike Shildt, were not going to be around long. People got on board, or else.

It seemed at times during this regular season, thanks in part to assistant hitting coach Turner Ward, that an often bumpy transition had neared something close to a smooth-sailing point. Albert and Ward had different ways to communicate with different hitters. The Cardinals were speaking Albert’s language and using his new-school tools.

For the first time, an offensive approach seemed to be clear. Hitters were trying to force pitchers to throw strikes to areas of the zone where damage could be done, then trying to drive those payoff pitches with authority. Plate discipline was key. Hitting the ball in the air with authority was the plan.

The Cardinals finished the regular season ranked fifth in MLB in on-base plus slugging percentage (.745). They were top 10 in home runs (197) and bottom-five in strikeouts (1,226). They had MLB’s best OPS with runners on base (.795) and fifth-best OPS with runners in scoring position (.791).

The Cardinals produced them despite ho-hum rankings in some other telling categories.

When past Cardinals lineups had struggled and searched, there was a lot of talk about underlying numbers looking better than reality suggested.

When the Cardinals lineup was producing, as this one often did, at least before September, no one cared much about the underlying numbers. That’s how this works, of course. Until expected stats determine wins and losses instead of what actually happens, real life matters more. The Cardinals didn’t need to convince us the offense was working when we could all see it for ourselves.

But once again, the Cardinals offense ghosted the postseason, turning worries that stirred during a cold September into an unfortunate reality.

While elements of randomness certainly affect the postseason, an Albert-instructed offense disappearing in the postseason no longer seemed so random.

The Cardinals totaled just three runs — and scored in just three innings — during their dropped two-game home series to the Phillies in the National League Wild Card.

They went 1 for 11 in scoring position, stranded 14 and produced one extra-base hit through the two losses. National League MVP candidates Nolan Arenado and Paul Goldschmidt combined to go 1 for 15 with six strikeouts, with Goldschmidt showing zero signs of snapping a sustained slump that nearly cost him his spot as the NL MVP favorite. The Cardinals’ Game 2 loss was the 17th time the 2022 Cardinals had been shut out, and the eighth time in 15 postseason games since Albert’s hire the offense scored one or no runs.

I recently mentioned the shutouts when pointing to numbers the Cardinals could not afford to ignore this offseason. If the Cardinals were happy with their hitting direction, and they apparently were, then they needed to get some better hitters. Something had to give. Especially in the postseason, where elite pitching and scouting feast on weaknesses.

The Cardinals in recent postseasons have too often lacked situational precision and have too often looked like a string of hitters headed to the plate trying to singlehandedly win the game. If that’s the way, the only option is adding more hitters who are capable of doing it.

The offense will be a focus this offseason, Mozeliak said Wednesday, and the emphasis will be on lineup improvement, not hitting process altered. Payroll is going to rise as lineup protection for Goldschmidt and Arenado is pursued. All of this should have been music to Albert’s ears.

“Jeff accomplished exactly what we were hoping he would do,” Mozeliak said. “He modernized our hitting program, our strategy. He made a huge contribution to our minor league side. From that standpoint, it was a success. When you look at what was happening up here at the big league level, people were tough on him. It wasn’t an easy job. Our offense was good this year. You compare it to the league, and it was good. I was hopeful he would come back. But for personal reasons and for just wanting maybe to try something different, is why we are where we are.”

It’s an often unpleasant part of the job. There is stuff out there, unfortunately, that crosses the line of human decency. But it’s just part of the gig.

You can ignore it. You can feed off it. You can do everything but one thing — let it get to you.

“There were some levels of frustration,” Mozeliak said. “Feeling like he took a lot of the blame when things weren’t going well. For him, he’s open to change. ... Again, I was prepared to offer him a contract. But before I even got that out of my mouth, he told me he wasn’t coming back.”

If outside angst was truly enough for Albert to eject, this was never going to work long-term, no matter how much the front office wanted to defend the hire. Cardinals hitting coach is a high-pressure position. Thick skin is a required part of the uniform.

Isaiah Jarvis is just leaving the batter's box as Albert Pujols crosses the plate, but we can learn lessons from both

The Phillies don't have the pitching depth or defense or experience or fancy record of Houston, but they're unbeaten at home; 5-0 at Citizens …

Cardinals hitting coach Jeff Albert talks to visiting coaches on Friday, June 25, 2021, before a game against the Pirates at Busch Stadium.