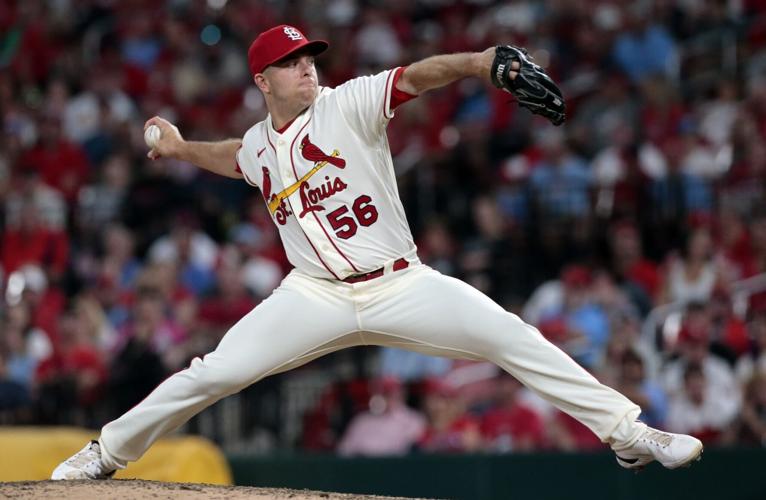 Cardinals reliever Ryan Helsley works in the ninth inning of the nightcap of a doubleheader against Cincinnati on Saturday, Sept. 17, 2022, at Busch Stadium. 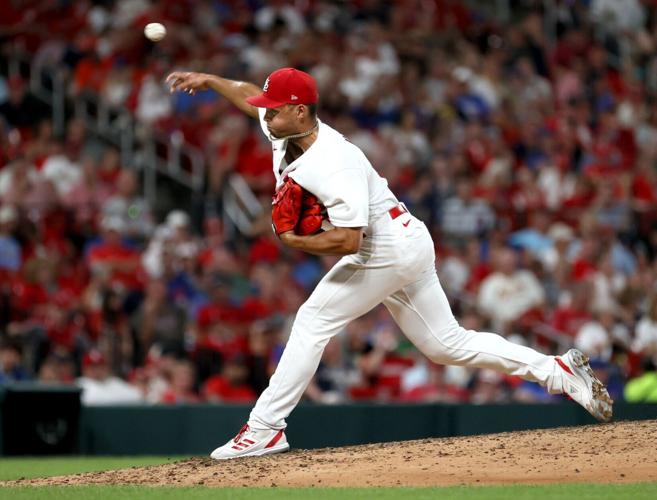 Cardinals relief pitcher Jordan Hicks delivers in the seventh inning of a game against the Chicago Cubs on Thursday, Aug. 4, 2022, at Busch Stadium.

MLB teams this offseason are tripping over one another to throw big paydays at “proven” relievers, handing out whopping contracts to volatile arms, driving prices up, up, up along the way.

The Astros gave 32-year-old Rafael Montero three years and $34.5 million after he helped Houston’s electric bullpen lock up a World Series championship. He had a 2.37 ERA this season, the first time in the right-hander’s eight-year MLB career that it was lower than 5.52 in a season in which he had at least 25 appearances. That’s some serious trust he can repeat what he did in 2022, or at least come close.

The Padres gave nearly 32-year-old first-year major-leaguer Robert Suarez five years and $46 million, with the chance to opt out after three seasons and chase a bigger deal then. What are the chances he continues to defy the league well enough to use that opt-out clause?

And then there are the Mets, who gave All-Star closer Edwin Diaz five years and $102 million, making him the recipient of a record deal. He’s elite. But still ...

“I was communicating with a number of agents yesterday,” MLB Network’s Jon Morosi said Monday during a TV hit. “And the agents were telling me, ‘Wow, the relief pitching market is excellent right now.’ When you’ve got Suarez, who didn’t have any major-league experience before last season, getting a five-year deal with an opt-out after three? And then Montero, who struggled in 2021, and you consider he had an ERA above 6.00 a year ago at this time, and he gets a lucrative three-year deal? I’ve had a number of agents tell me this is a really good offseason to have a high-leverage reliever as a free agent.”

I bring it up because the Cardinals, like every team that wants to be good in 2023, could benefit from bullpen improvement. Their bullpen produced a 3.61 ERA last season, good for 11th in the game. Their 507 strikeouts secured by relievers ranked ... second to last.

Swing-and-miss stuff is in demand, and manager Oli Marmol’s relief corps could use some more whiff. If a reliever with high-strikeout potential starts to fall through the cracks of the market, great. Grab him.

But please don’t gamble at the high-stakes table. Costs are too high. Other needs — catcher, lineup help, rotation star power — are too great. And, let’s face it, the Cardinals’ troubled track record here has to be considered. Especially in this warped market.

The good reality is the Cardinals have done a very good job of cultivating key relievers from within the organization and finding some diamonds in the dust on the outside. Ryan Helsley, Jordan Hicks and Andre Pallante are coming back after strong seasons.

Helsley, 28, is the oldest of the three. Giovanny Gallegos, who has played the role of the redeemer in the Chasen Shreve trade for Luke Voit, earned his recent extension. Zack Thompson turned heads last season. Connor Thomas just dominated the Arizona Fall League. Gordon Graceffo and Tink Hence are climbing. There are many other names that will jostle for bullpen roles come spring training and if the Cardinals strengthen the top end of their rotation, that competition gets even stronger.

The bad reality is the Cardinals have made a lengthening list of poor decisions when it comes to bullpen spending in recent offseasons. Their formula for picking free-agent relieves has been shooting sparks for some time now. Granted, it’s a hard thing to do, considering the the volatility of relievers, most of which can fluctuate between all world one season and below average the next, sometimes for no clear reason. But even with an understanding of the hot-and-cold nature of this specific position group, the Cardinals have had more buyers’ remorse than most good teams could overcome.

Baseball Reference’s adjusted earned-run average assigns pitchers a score based on performance while baking in outside elements, such as ballpark factors, in an attempt to determine league-average production. The shorthand is ERA+. League average is 100.

Brett Cecil (2017-18), Greg Holland (2018), Luke Gregerson (2018-19), Andrew Miller (2019-21) and Nick Wittgren (2022) all came and went as Cardinals free-agent additions who failed to provide even league average production during their time with the team. Add in Drew VerHagen, who may or may not be back with the Cardinals after an injury-affected and disappointing debut season in 2022, and this group represents 13 seasons’ worth of major league contracts handed out and nearly $100 million committed.

The best performance? Miller’s ERA+ of 95, which included one above-average season during the shortened 2020 campaign sandwiched between two below-average full-length ones.

The safest, smartest way for the Cardinals to build a bullpen has become obvious as the organization has side-stepped free-agent potholes. Give young, impressive arms a chance to contribute early as relievers. Keep strong performers around; former Cards John Brebbia (Giants) and Luis Garcia (Padres) could have helped the club last season. Make small, safe bets as needed to supplement the group. And if you find yourself in need of relief help at the trade deadline, go trade for locked-in help when it’s become clearer who is having a strong season.

Spending significantly on relief is risky business, especially when you combine the Cardinals’ struggles to predict success there with the current state of bullpen inflation.

From Wally Moon to Albert Pujols, here's every St. Louis Cardinal to win Rookie of the Year

Hochman: This St. Louis native hit .325 in the minors. Then he died in Vietnam.

BenFred: These 3 non-shortstop free agents should get long, hard look from Cardinals

BenFred: What those adamant about Blues bringing David Perron back got right (and wrong)

Would things look different for the Blues if he was here?

The Cardinals and Yankees won the Rawlings Team Gold Glove in their respective leagues.

The AFL’s pitcher of the year, Thomas had a 1.75 ERA in six games. His addition protects him from the Rule 5 draft, brings the Cardinals’ roster to 39.

Cardinals reliever Ryan Helsley works in the ninth inning of the nightcap of a doubleheader against Cincinnati on Saturday, Sept. 17, 2022, at Busch Stadium.

Cardinals relief pitcher Jordan Hicks delivers in the seventh inning of a game against the Chicago Cubs on Thursday, Aug. 4, 2022, at Busch Stadium.