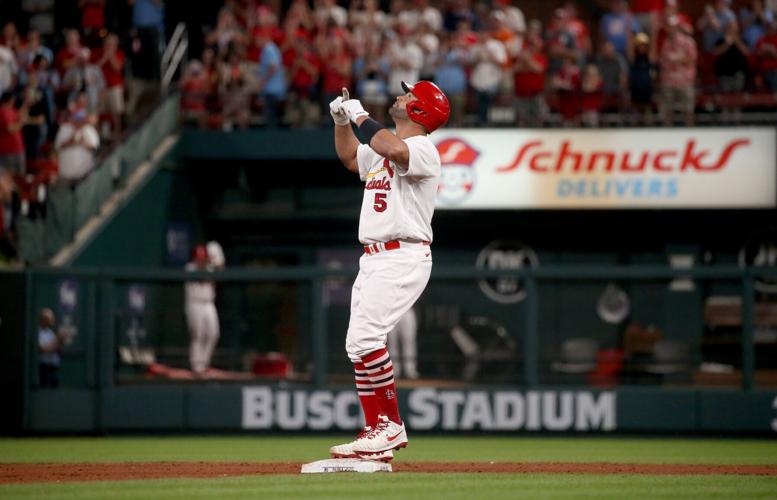 St. Louis Cardinals Albert Pujols (5) celebrates his RBI double in the eighth inning of a baseball game against the Milwaukee Brewers, on Wednesday, Sept. 14, 2022, at Busch Stadium. 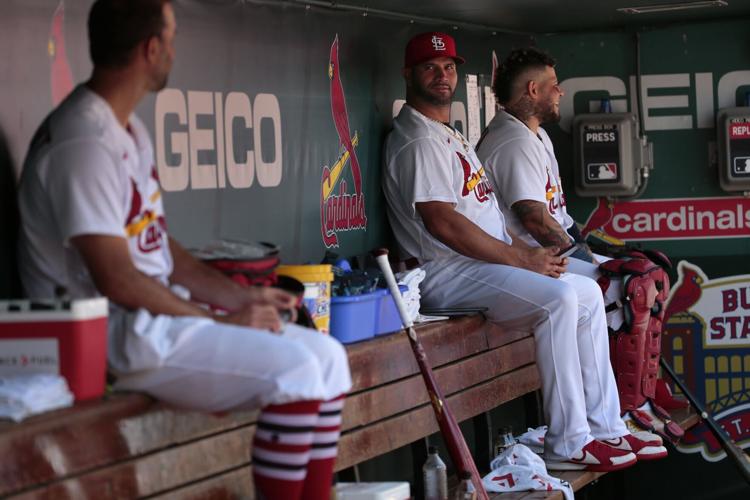 Cardinals pitcher Adam Wainwright, from left, visits with Albert Pujols and Yadier Molina during the second inning against the Rockies on Thursday, Aug. 18, 2022, at Busch Stadium.

Cardinals manager Oli Marmol went to bed Wednesday night reliving some of the magic moments from a history-making win against the Brewers.

He had more great moments to replay than sheep to count.

Adam Wainwright and Yadier Molina set the MLB record for starts as a battery (No. 325). Wainwright got the win (career No. 195). Molina threw out a base runner to inch up his active-player-leading career caught-stealing percentage (40.3) and also knocked in the game-winning RBI. Albert Pujols added a booming RBI double that, upon contact, made a sellout crowd wonder if home run No. 698 was in flight. “The Machine” instead had to settle for career RBI No. 2,200.

Staggering numbers. Overwhelming emotions. Quieter decisions Marmol made upon returning to work Thursday should not get lost in the whirlwind. They told us something.

Two of Wednesday night’s heroic veterans were back in Marmol’s Thursday lineup, one (Pujols) despite left-right splits that could suggest an alternative approach, and another (Molina) because the catcher presented a compelling case to the manager.

Marmol picked the surging Pujols over rookie Nolan Gorman, even against right-handed Brewers starter Chase Anderson. Molina, citing Roberto Clemente Day, said he would like to start with Miles Mikolas, who is often instead caught by Andrew Knizner.

Molina is a Clemente Award winner. Clemente means so much to many and perhaps the most to the people of Pittsburgh and Puerto Rico.

Oh, and there is this: Molina entered this series against the Reds averaging .333 with a .371 on-base percentage and a .606 slugging percentage since the start of the month. The bumps Molina’s season rolled over to get to this point matter less every day now. September Yadi is a real thing, and he’s rolling. His second-inning RBI single on a Corbin Burnes slider Wednesday night was more proof.

Pujols, who like Molina also is a Clemente Award winner, isn’t just on the cusp of his 700th homer. He’s hot. Over the past month in nearly 50 at-bats against right-handed pitchers, the slugger who was brought home to crush southpaws (mission accomplished) has averaged .271 with two homers and as many RBIs (nine) as strikeouts. Gorman in 61 at-bats against right-handers during that same span had averaged .197 with one homer, seven RBIs and 25 strikeouts.

Credit where it’s due. Cardinals reliever Jordan Hicks said weeks ago that, “The Machine is oiled. Valvoline.” Amen. Let him swing away. Marmol isn’t just taking advantage of the lead in the standings here. He’s using common sense.

“I’m really focused on just winning,” Marmol said. “The pieces have fallen in a way where Albert is swinging a really good bat regardless. ... When I sit here and do the lineup, my main focus is: How do we win tonight? My first filter is: How do we win?”

Leaning on some of the game’s most proven active winners is a good bet.

Thursday’s pregame developments underscored comments Wainwright, another Clemente Award winner, made late Wednesday after his teammates had finished both drenching him in soda and toasting him with champagne.

“We didn’t want to just be mascots,” Wainwright said about the trio. “We wanted to be out there contributing, helping us win games. There has not been a more important person on this team down the stretch than Albert. Yadi is the constant force that keeps everybody in check and calm and cool on those situations. I’ve been able to win some games.”

Wainwright was being modest. He’s 11-9 with a 3.29 ERA despite being in what he has described as the exit lane of a dead-arm phase. Now that he’s set the record with Molina, the team’s emphasis can turn to making sure he is at his best for postseason play.

It was Wainwright, first and most bluntly, who made the spring-training point of stressing that a 2022 season that was shaping up to honor the past, celebrate shared longevity and cheer individual milestones could not lose track of the primary purpose. That’s a deep and meaningful postseason run. The kind of playoff push St. Louis has been so desperately craving. No one wants it more than these three.

Marmol’s Cardinals, thanks in large part to the club’s three elders, have developed the look and feel of a team that won’t be satisfied by anything that happens during the regular season. That doesn’t mean they can’t and won’t taste a little Champagne now. History calls for it. They’re just making sure to leave room for something sweeter.

Toasts were raised for Wainwright and Molina late Wednesday. The Cardinals went back to work Thursday. The team’s legends who are receiving deserved cheers down this special stretch are the same ones who continue to refocus on the bigger picture.

“Each time we have a moment to celebrate like that, we always bring it back in the end,” Wainwright said. “This is a stepping stone. This is great. Thanks for celebrating. But we have a greater mission in mind.”

Cardinals notebook: Besides Lars Nootbaar, four others wear No. 21 in Clemente's honor

“When he smells blood," Cardinals manager Oliver Marmol said, "he will pounce on it real quick."

The stars come out, especially Albert Pujols (No. 698), as Cardinals overtake Reds

BenFred: Predicting the Cardinals’ postseason rotation? You could be surprised

Some factors to consider when engaging in a still-too-early discussion.

Pujols hits one for the former president — of the Dominican Republic; it’s No. 698

The big hitters take over late in Cardinals' victory over Reds. Flaherty finds his fastball. And he breaks a pane of glass.

BenFred: Cardinals outfielder Dylan Carlson gets another chance to run away with center field

St. Louis Cardinals Albert Pujols (5) celebrates his RBI double in the eighth inning of a baseball game against the Milwaukee Brewers, on Wednesday, Sept. 14, 2022, at Busch Stadium.

Cardinals pitcher Adam Wainwright, from left, visits with Albert Pujols and Yadier Molina during the second inning against the Rockies on Thursday, Aug. 18, 2022, at Busch Stadium.