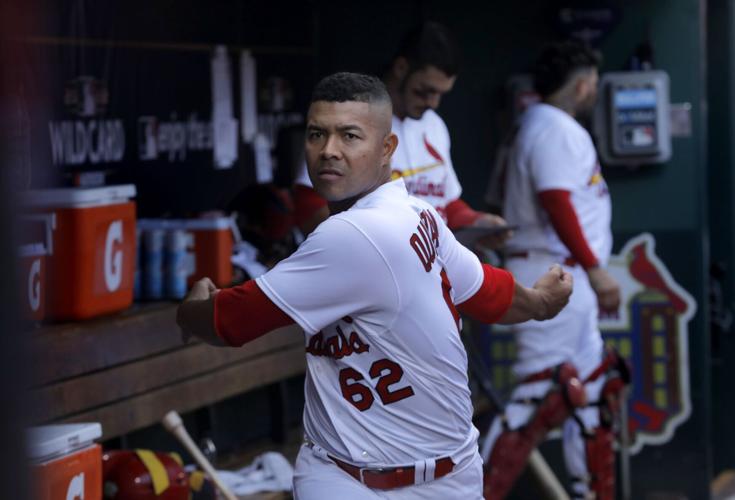 Cardinals starting pitcher Jose Quintana (62) keeps loose in the dugout in the third inning of Game 1 of the National League Wild Card series against the Phillies on Friday, Oct. 7, 2022, at Busch Stadium. 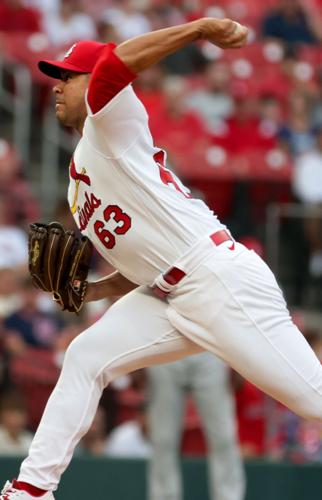 Cardinals starting pitcher Jose Quintana throws on Tuesday, Aug. 16, 2022, in the first inning of a game against the Rockies at Busch Stadium. 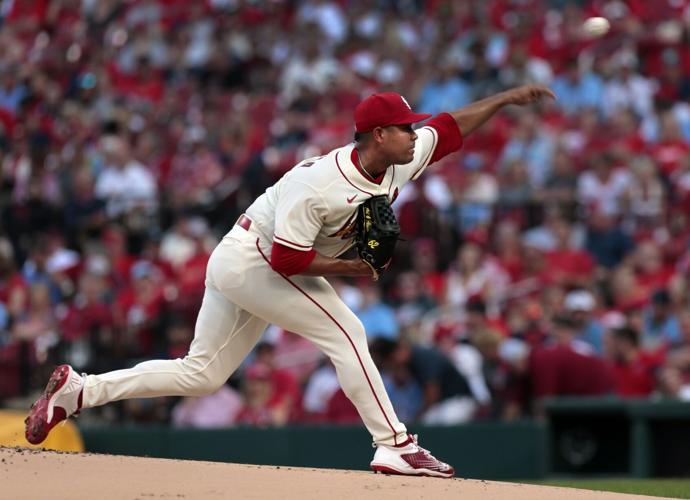 St. Louis Cardinals starting pitcher Jose Quintana works the first inning against the Cincinnati Reds on Saturday, Sept. 17, 2022 in the second game of a doubleheader at Busch Stadium.

Just as the Cardinals were finalizing contract terms with free-agent Willson Contreras during winter meetings in San Diego, the pitcher who connected some of the earliest dots between the Cardinals and their new catcher came to terms with his new team.

It was Quintana, remember, who confirmed even before last season ended that he had been pitching Contreras on the idea of playing for manager Oli Marmol’s Cardinals in 2023.

Turns out he will be competing against his old Cubs teammate in the National League instead of throwing to him.

Emails and tweets and STLToday.com chat messages have been rolling in, asking if the news of Quintana’s deal with the Mets got buried by the timing of the Contreras addition.

Where is the outrage, people want to know. Why aren’t media members hollering that the Cardinals made a big mistake by not beating the Mets’ meager (for the massive-spending Mets) two-year deal worth just $13 million per season. In this inflated market, that could be a steal. The Mets seem to think so. They can line up Quintana behind Max Scherzer and Justin Verlander. Yowza.

“Over the last decade, Jose has been one of the most dependable starting pitchers in the majors,” Mets general manager Billy Eppler told New York media members during Quintana’s introduction. “Adding another left-handed option to our rotation, especially one with his durability, experience, and moxie, will give our starting staff quality depth.”

Cardinals fans fell hard for Quintana. For good reason. He was stellar after the Cardinals acquired him in a rare trade-deadline swap with division foe Pittsburgh, making 12 starts and pitching 62.2 innings while protecting a 2.01 ERA. The Cardinals won nine of those 12 regular-season games. Quintana’s Game 1 start against the Phillies was deserved, and he did his job in it, limiting the Phillies to two hits and one walk while striking out three in 5.1 scoreless innings before the bullpenning began.

Marmol didn’t make a mistake lifting Quintana, who had pitched six-plus innings just twice as a Cardinal, when he did. Trusting All-Star closer Ryan Helsley’s injured finger without a backup plan was the error. There’s a lesson there, perhaps. Letting Quintana walk this offseason isn’t necessarily a mistake, as long as the Cardinals make the next right move.

Quintana didn’t just have his career-best season at age 33. He had his career-best season at age 33, while playing on a bet-on-himself one-year contract. That screams hard to replicate. Quintana, as the Mets accurately praised, has always been quite reliable in terms of taking the ball. What he wasn’t between 2019-21 was very effective. That changed in 2022, when he pitched well for the Pirates and splendidly for the Cardinals. But a 5.13 ERA over 65 starts between 2019-21 is not something you can completely flush when projecting age-34 and 35 seasons.

The Cardinals can do better, and they should.

They left winter meetings knowing their biggest box was checked, thanks to the quick work on Contreras. They have retreated to that safe space where, publicly, they say they like their team while, privately, they look for ways to improve it. President of baseball operations John Mozeliak and his decision makers know a rotation that is long on potential and depth is short on sure things. Miles Mikolas and Jordan Montgomery are the only two returning starters who managed to stay mostly healthy and mostly reliable all of last season. Adam Wainwright’s mechanics derailed late. Dakota Hudson struggled in his return from Tommy John surgery. Others were affected by injuries. If the best plan the Cardinals can come up with is to get the band back together and hope for better results, Quintana should have been in that band. To let Quintana walk and then do nothing? Risky. Deflating.

Good news: There’s still time to add an impact arm capable of slotting at or near the top of the rotation. Bad news? It’s going to need to be a trade.

Carlos Rodon, the only remaining appealing free-agent starter, is off the board to the Yankees for a reported six-year, $162 million deal. Rodon’s departure from the market should heat up trade talks for starting pitchers. Pablo Lopez of the Marlins, for example, has been an obvious could-be Cardinal for some time now. Miami needs to deal pitching for everything but pitching. The Marlins’ new manager, Skip Schumaker, knows a thing or two about the Cardinals’ trade chips, considering he was the bench coach in St. Louis last season. The Cardinals are protective of their prospects and players, but they have shopped some in potential trade talks this offseason. Nolan Gorman’s name has been out there. Helsley’s, too. The Cardinals have the player capital necessary to make an impact trade for the rotation. That should be their goal now.

Another option would be to wait, see what happens with the collection of arms the Cardinals already have, and once again move to upgrade the rotation at the trade deadline if that’s needed, like the front office did by adding Quintana and Jordan Montgomery last season. Considering the attractive group of pending free-agent starters coming in 2024 — Max Scherzer could be included if he opts out of his deal with the Mets — there could be some game-changing rentals flipped to new teams when contenders and pretenders get sorted. This is the path the Cardinals tend to prefer. It’s the one they should resist now.

If the let-things-play-out route was the plan for the rotation all along, Quintana should still be in it. Letting him walk wasn’t a mistake — yet.

BenFred: Preparation is how Mizzou can keep poaching programs away from Dennis Gates

If coach-shopping schools do come for Dennis Gates, Mizzou can and should be able to give the first-year sensation reasons to stay put.

BenFred: Mizzou basketball shows why it could be a dangerous March Madness foe

If their shots are falling, Dennis Gates' Missouri men's basketball team can shred any team in its path.

BenFred: It's officially A-10 Tournament or bust for SLU, and it's hard to expect much there

BenFred Chat: How did the Blues wind up in this mess?

Cardinals starting pitcher Jose Quintana (62) keeps loose in the dugout in the third inning of Game 1 of the National League Wild Card series against the Phillies on Friday, Oct. 7, 2022, at Busch Stadium.

Cardinals starting pitcher Jose Quintana throws on Tuesday, Aug. 16, 2022, in the first inning of a game against the Rockies at Busch Stadium.

St. Louis Cardinals starting pitcher Jose Quintana works the first inning against the Cincinnati Reds on Saturday, Sept. 17, 2022 in the second game of a doubleheader at Busch Stadium.