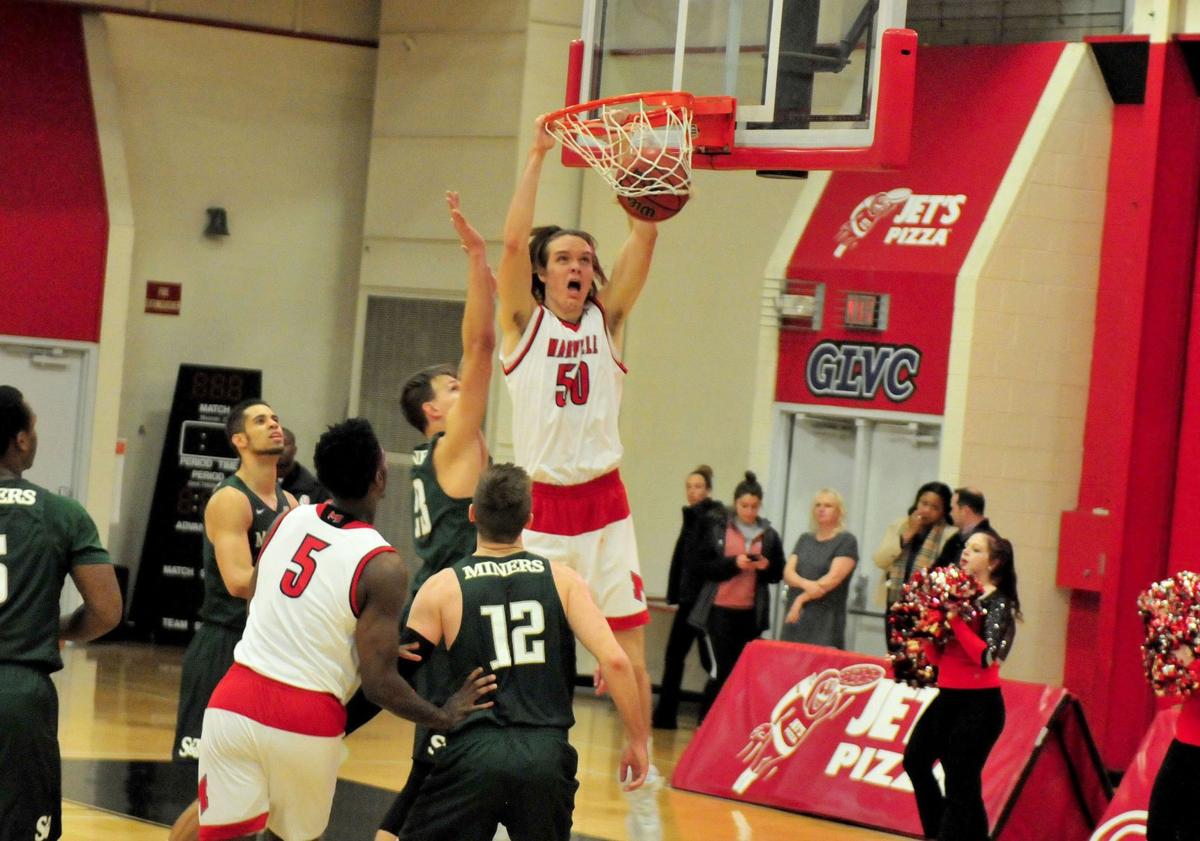 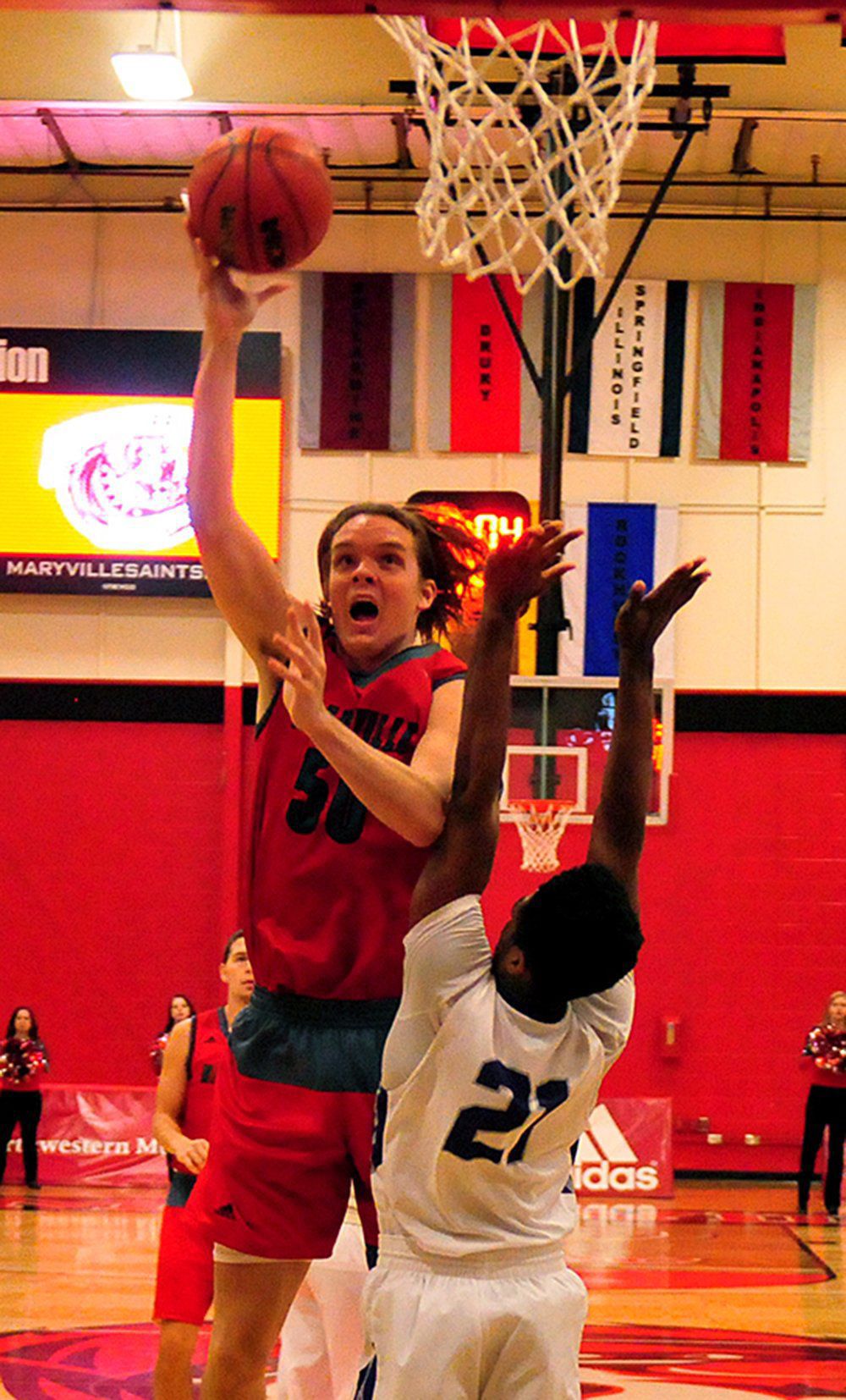 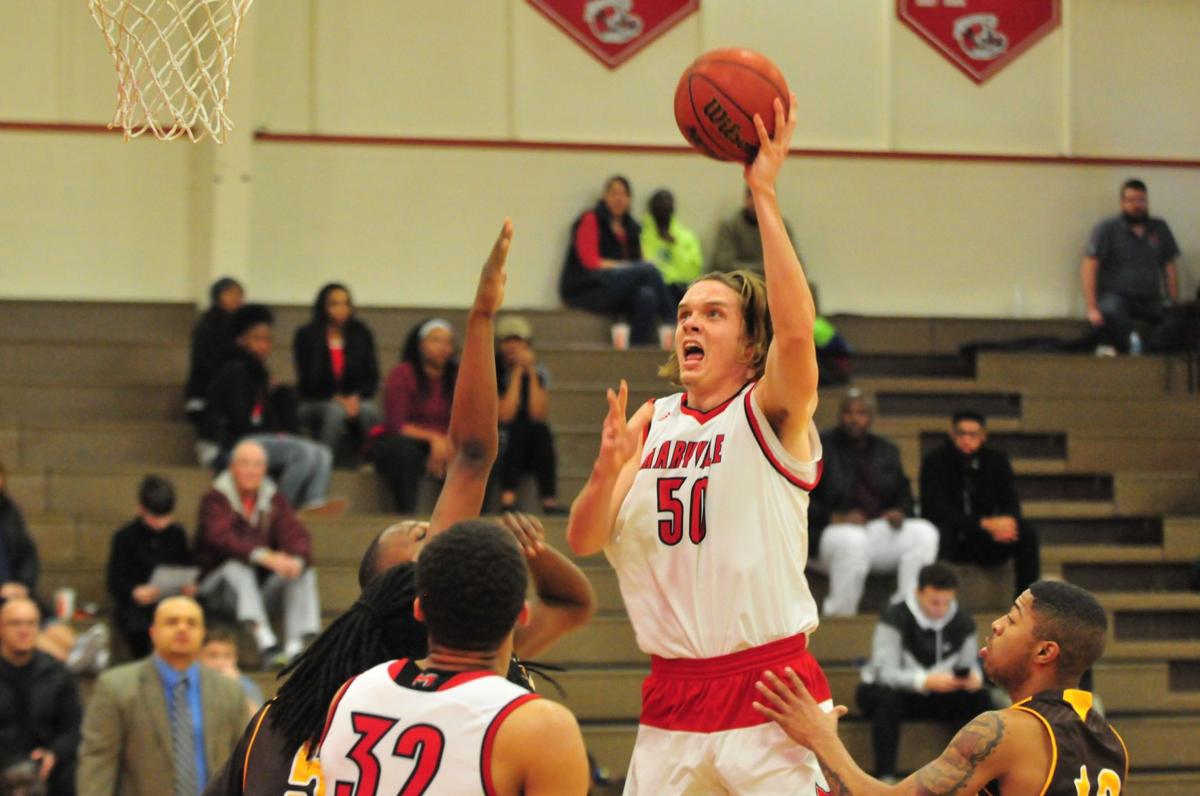 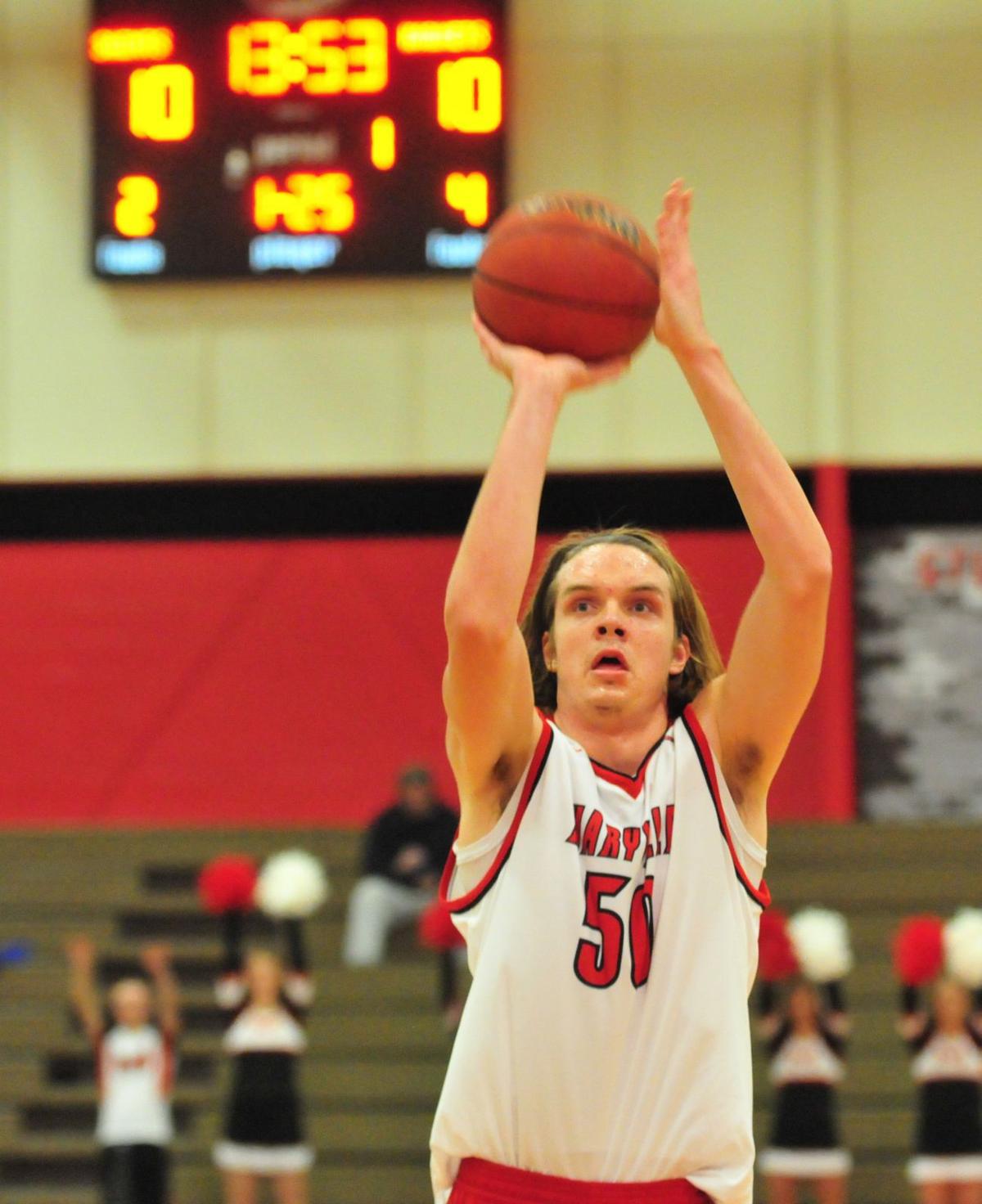 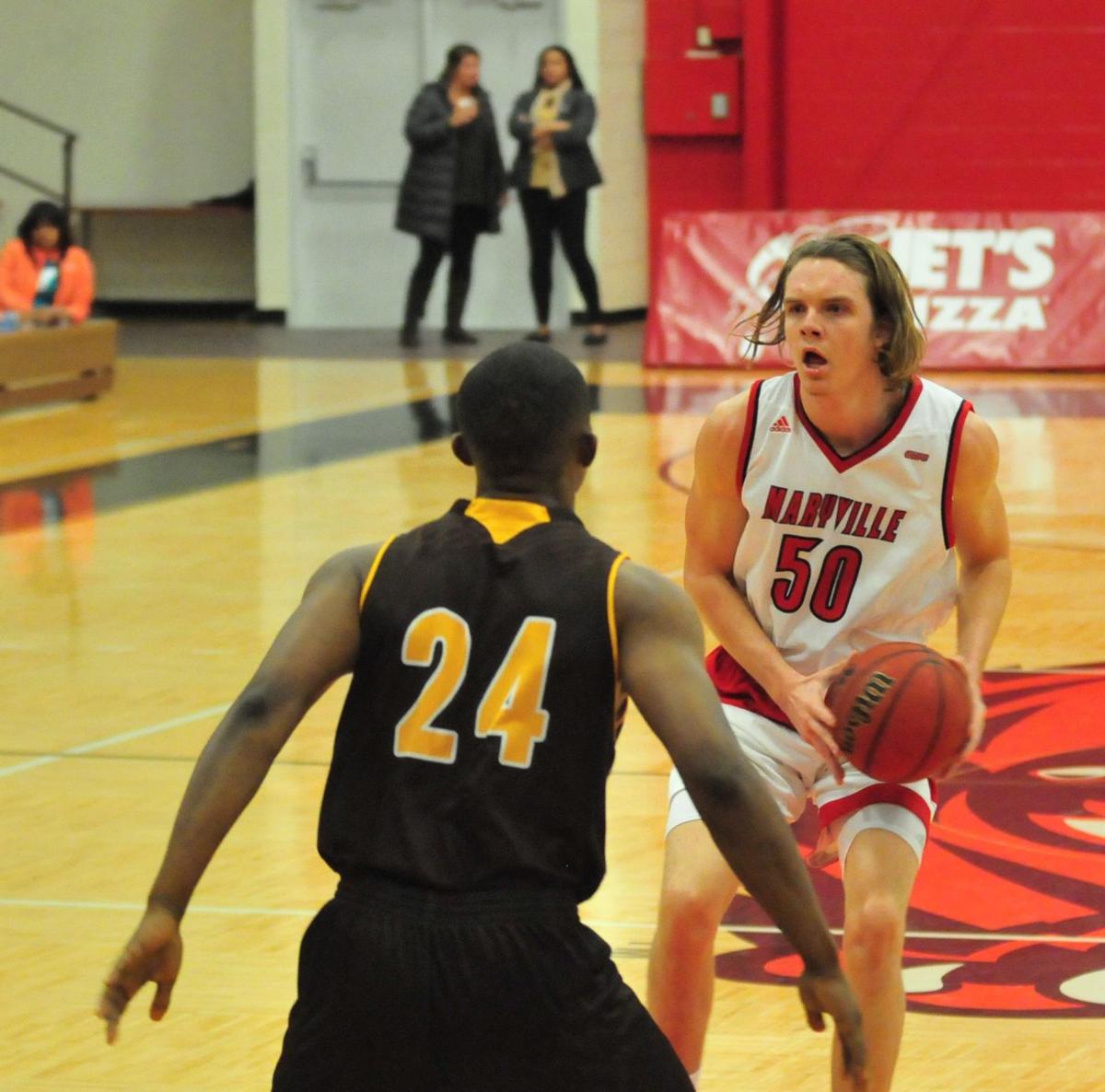 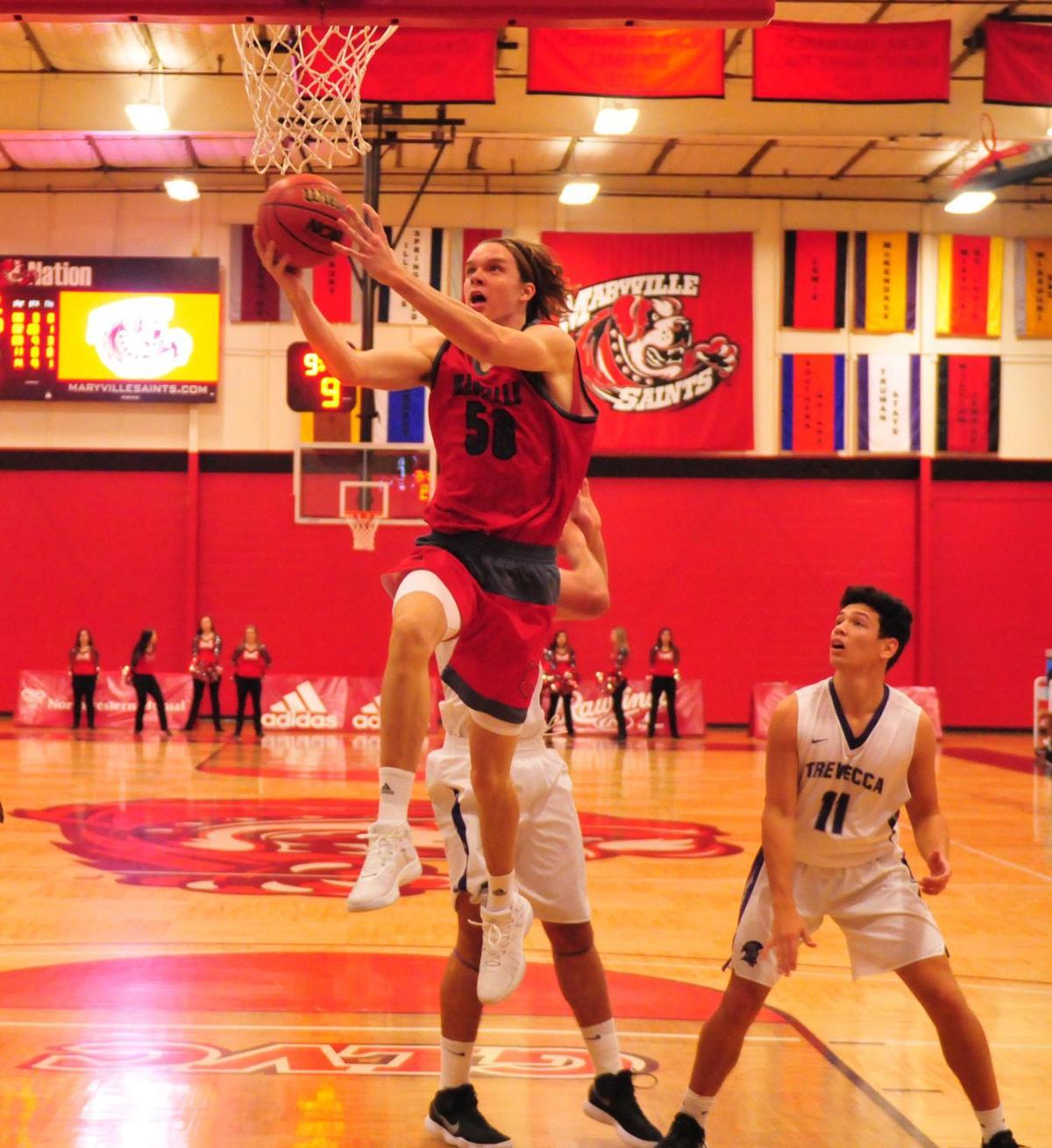 Ask Maryville University basketball’s star player about having a grandfather in the Naismith Memorial Basketball Hall of Fame, and Nolan Berry mentions Ed Macauley’s love for his family, followed by the former deacon’s dedication to his Catholic faith.

Only then does the 6-foot-10 center explain how his late grandfather’s advice helped him steer a frustrating college career back home in time for a special senior season.

Most of you know Macauley’s story. If you don’t, ask your parents. See their eyes light up as the memories return.

Berry’s grandfather was a basketball force. The willowy 6-foot-8 center had a killer hook shot, a sharp eye for assists and a dogged approach to defense. He led St. Louis University to the NIT title in 1948, back when the NIT actually mattered. He helped the St. Louis Hawks win their only NBA championship. He was an All-American, an Associated Press player of the year, a seven-time NBA All-Star, a homegrown legend.

He also was a grandfather to 17.

And one of those 17 grew up like Macauley, tall and shy and blessed with a body for basketball and an athleticism that defied it.

Macauley shared tips with the boy. He taught him some of the game’s finer points, such as how to sneak an agitating elbow into the ribs of an opponent during the jostle for a rebound. But Macauley’s most-repeated lines were much more fundamental.

“Shoot the ball more,” Berry recalled with a smile, before he confessed to passing up open layups in elementary school.

“As I started getting better, more confident in my skills, I started shooting more. He would always tell me, ‘More. More. You can score.’”

There was another piece of advice, a staple of the sport Berry would lose and find again after his 83-year-old grandfather died in 2011.

“He would tell me to have fun,” Berry said. “It sounds simple.”

Yet it was not long ago that basketball became a burden for Berry.

Berry, a two-time first team Post-Dispatch All-Metro pick, had conquered his fear of shooting by the time he signed to play for Brad Stevens’ Butler team before the 2013-14 season. The notion of not playing for the coach who sat beneath the basket for his summer league games was not a fear the prized recruit knew he should have. But Stevens bolted for the Boston Celtics, the team Macauley spent six seasons with, and Berry joined the group of Bulldogs who transferred.

UC Davis was supposed to be a fresh start, a better fit. Aggies coach Jim Les told reporters that Berry had “NBA potential.” But after Berry sat out the 2014-15 season to satisfy NCAA rules, a tweaked knee turned into something more serious. The knee issue flared into a hip issue. Berry had gained weight, which complicated things. A school official told the Davis Enterprise that Berry continuing to play in college looked “doubtful.” His college career was in jeopardy after a grand total of 28 games between two schools. He had averaged 4.5 points and 2.3 rebounds.

Berry found himself in a strange place, and we are not talking about California. He missed home, specifically his mom’s spaghetti with meat sauce. But this was more than just that. Basketball was no longer fun.

“I needed to come back home and re-start, refresh, focus on myself, my body,” Berry said. “I needed to get into the best shape I could, get healthy and dive back in. I needed to fall back in love with basketball.”

He finally found the fit he longed for at the Division II school in his hometown.

Now look at him.

He is averaging team-highs in points (18.5 a game), rebounds (9.9) and field-goal percentage (65.8). In 14 games, the versatile big man has scored 30-plus points twice. He had an 18-rebound game. He had a five-assist game. His double-double count is up to six. He hung 15 points and 10 rebounds on Miami (Ohio) in an exhibition upset of the Division I opponent, and he hasn’t stopped since.

Did I mention he can shoot? Like, really shoot. Berry has swished 10 of his 16 3-point attempts.

“He has such a good feel for the game,” Saints coach Marc Stricker said. “He knows when to pick and pop, or roll. He knows when to flash from the block to the elbow and relieve a guard of pressure. He knows when to catch it and quickly spin on the baseline. He understands spacing, timing, ball movement.”

Berry’s parents are in the stands. His friends are flocking to see him play. Scouts have him on their radar, and they are wondering what kind of splash he could make in the NBA’s development league, or overseas.

“The journey, my whole college career, has led me to a place where I can thrive here,” Berry said. “I don’t think I would change it for anything. It’s kind of made me who I am.”

Since Berry started playing basketball, he has heard from strangers who know his family history.

“You play just like your grandpa,” some have said.

Those comments mean more now. It matters, playing in a place where Macauley’s legacy resonates. Part of that legacy was instilling in a grandson the importance of loving the game that’s in his blood.

'If our safety was the most important thing, they wouldn’t have us out here,' one construction worker told the Los Angeles Times.

BenFred: Baseball's comeback seems farther away the more you think about it

At a time when optimism can be harder to find than toilet paper, John Mozeliak is asking for it, and hoping it rolls. But he’s also realistic.

BenFred: Aldon Smith is getting another chance by finally giving himself one

Smith has hurt a lot of people who care about him. But he’s done the most damage to himself since the start of a spiral that has hopefully stopped.

BenFred: Let's celebrate our heroes off the field, starting with this sweet gesture from a cake decorator

We're all helping each other get through a trying time, whether it's Waino, Fowler, the Blues ... or a cake decorator in Farmington.

BenFred's 5: Even during hard times, we can count on Rams for a laugh

Also among the five topics STL sports fans will be discussing: Report from UK says Cards-Cubs series in London is off.

BenFred: Read his chat Q-&-A on Cardinals, Blues and shutdowns of all pro and college sports