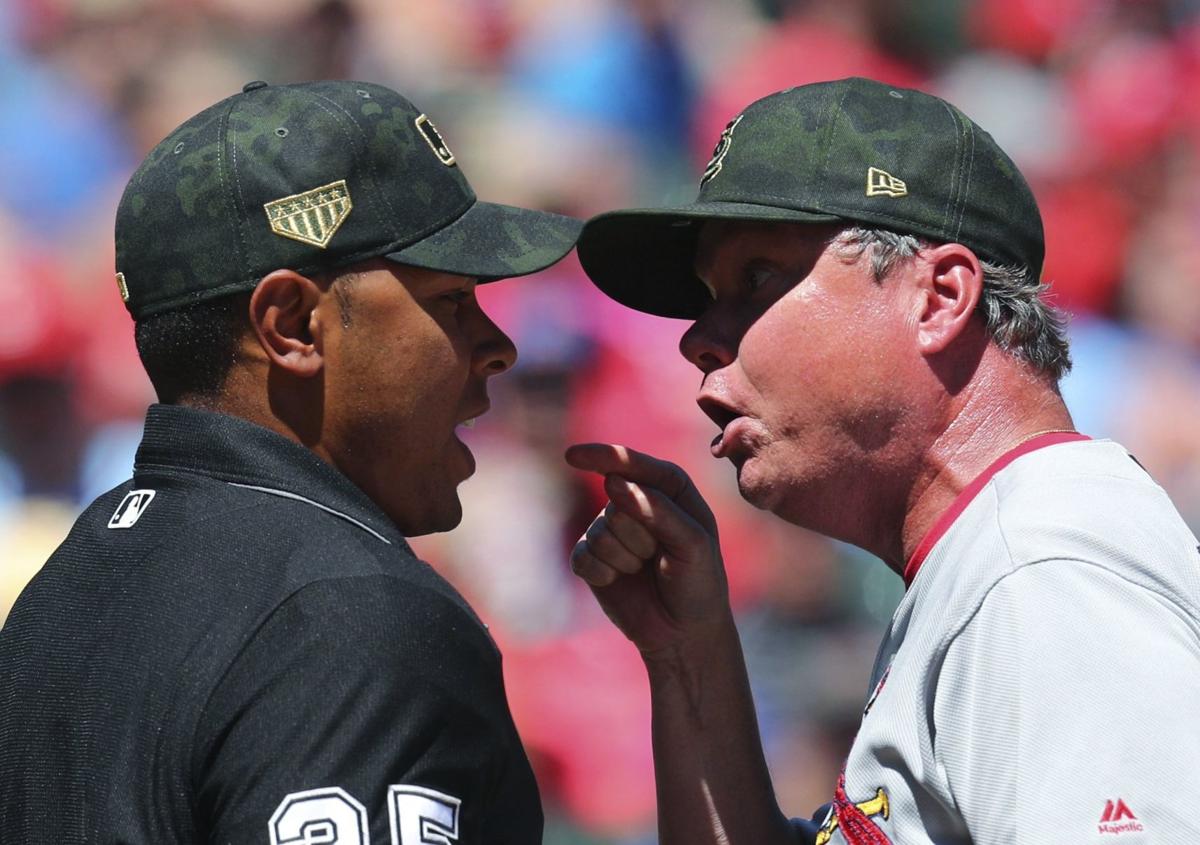 Home plate umpire Jeremie Rehak gets an earful from St. Louis Cardinals manager Mike Shildt after a strikeout of Dexter Fowler in the fourth inning of Sunday's game in Arlington, Texas. Shildt was ejected from the game. (AP Photo) 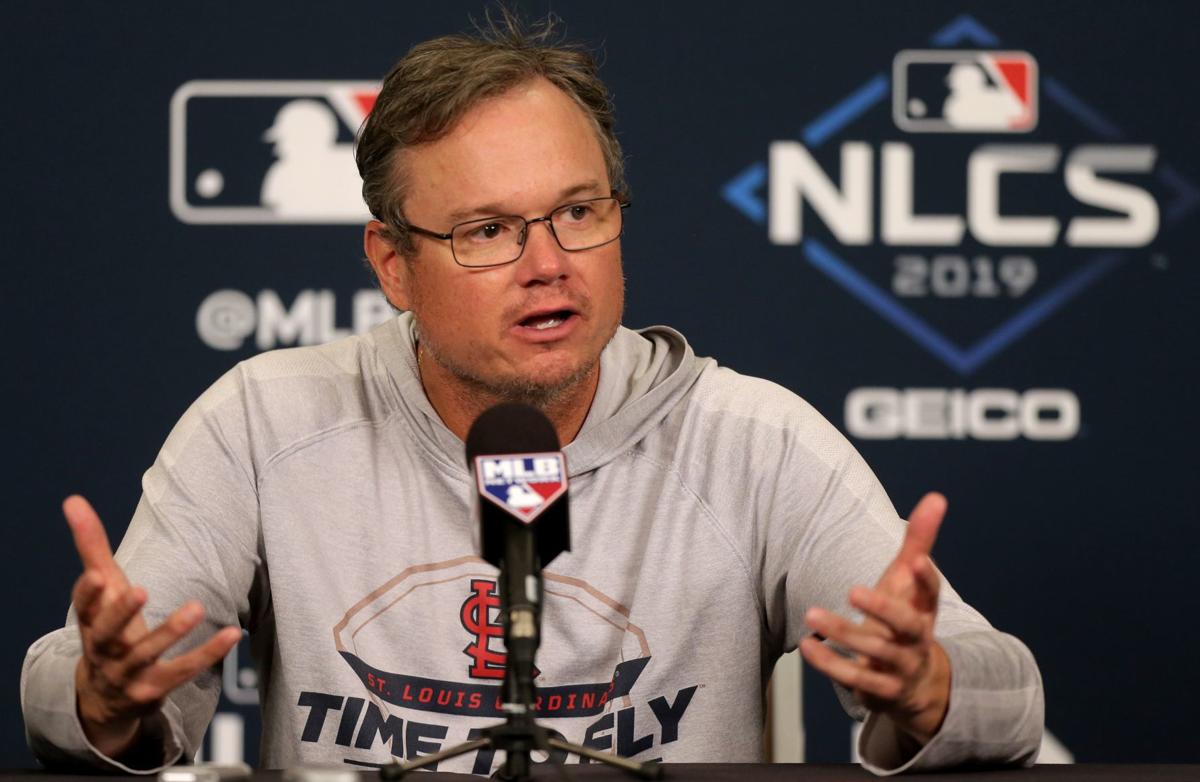 Cardinals manager Mike Shildt speaks to media on Oct. 10 before the start of the NLCS. Photo by David Carson, dcarson@post-dispatch.com

Of all the opinions Mike Shildt heard in response to a profanity-spiked speech that was never supposed to escape clubhouse doors in Atlanta, one voice mattered most to the Cardinals manager.

You better believe some of that conversation was referenced in the heartfelt apology Shildt had offered moments earlier, addressing the topic right away and just once before he steered the conversation toward the National League Championship Series.

“I apologize if my language offended anyone,” Shildt said. “It's not something I like to represent. It's not to be excused. It's supposed to be a private moment. But I will say that I'm flawed. I have my moments. I grew up in a clubhouse, and one of the crosses I bear is my language. So, I have done a nice job over the many years of curbing that and trying to represent always this organization and myself in a positive light, with class and dignity. I feel like I've always done that. It was regretful that it was able to get out.”

He paused, then added: “I will not apologize for having passion about how I feel about our team, and the accomplishments of our team.”

Shildt passed the B.S. test. He really is sorry. Sorrier than he should be.

President of baseball operations John Mozeliak said during a Thursday morning radio interview that, while he wished the video had not made the rounds, it did capture Shildt's "refreshing" fire. Those in the clubhouse and dugout, while trying to hide their smiles because they knew Shildt was legitimately disappointed in himself, pointed to the speech as evidence of how much Shildt loves to compete — and win. Rookie outfielder Randy Arozarena’s Instagram live-stream of Shildt’s speech probably helped the manager's image in St. Louis as much as it hurt it.

Here, uncensored and unvarnished, was the version of Shildt we rarely see, the one we catch only in snippets, the one his players see burning brightly when an umpire, opponent or anyone else challenges his club.

If this side of Shildt shocked you, remember some of those snippets.

It showed when Dexter Fowler watched two clear balls turn into called strikes in an at-bat against the Rangers, and Shildt stormed out of the dugout, mouth going a mile a minute, to get tossed before Fowler could.

It showed when home plate umpire Rob Drake showed up Yairo Munoz by not granting him time in the batter's box, then dismissed him with a hand motion as the player tried to plead his case. Shildt's severe case of red (rear) got him ejected then, too.

It showed when a fan ran onto the field with unclear intentions, and Shildt became a cheerleader on the bench, rooting — colorfully — for security staff to level the intruder.

And it really showed when Shildt, who had boiled hot while watching the Braves and Cardinals clash around the beef between Carlos Martinez and Ronald Acuna Jr., addressed his team after its Game 5 thumping of the Braves.

This side of Shildt clashes with the buttoned-up version of the manager who can come across like a church secretary. But the truth is, sometimes God-fearing men who try hard to be ambassadors of their faith get caught letting bad words fly. Thank goodness for forgiveness and grace.

Speaking of grace, how else would you describe how the manager handled the case of the rookie and his cell phone?

“He was just excited,” Shildt said about Arozarena. “He’s a great kid with a great heart.”

Those who piled on Arozarena should realize he speaks broken English, at best, and likely did not realize what he was streaming.

Those who piled on Shildt should hear this from the Cardinals' Game 1 NLCS starter.

“We get to see that fired-up side of him when the cameras are off — or supposed to be off — and he gets fired up,” Miles Mikolas said. “And when you see your manager getting that excited and that fired up, it feeds into what everyone else is doing. It's contagious."

Some will cheer Shildt's speech. Some will accept his apology and move on. Others will do their best to bring it up again and again.

That last group tends to include folks who like to see the Cardinals lose. That group is growing again. If you needed proof that the Cardinals are back, observe the critics coming out of the woodwork.

The Cardinals chafed the Pirates by stealing bases when leading by a lot. They won the Battle of Boring by sweeping Joe Maddon out of his job at Wrigley Field. One of their relievers single-handedly turned certain Georgia politicians into a mewling chorus of sore losers. Shildt's been supportive at every turn.

"The guy lives and dies by his players," second baseman Kolten Wong said recently. "That’s why we love him. That’s why we do everything for him."

Since Tony La Russa in his prime, the Cardinals are at their best when they irritate and inflame. Their edge is back. It has punctured through to public view at different times this season, but its return can be traced to a winter day when a pithy Kris Bryant line about "boring" St. Louis made Yadier Molina bristle.

Don’t forget what Molina said about Shildt on that January day.

It's the Spanish term for boss.

A playoff game did not sell out, TV ratings down: What's up with Cardinals fans?

Where have all the Cardinals fans gone?

During the frenzy of the Cardinals’ first champagne celebration this fall, pitching coach Mike Maddux stood near a tub of ice and beer in the …

When Jack Flaherty wanted to quit baseball as a high school freshman, his mom said he had to do something first: approach the younger kids he coached and "tell them you're a quitter."

Home plate umpire Jeremie Rehak gets an earful from St. Louis Cardinals manager Mike Shildt after a strikeout of Dexter Fowler in the fourth inning of Sunday's game in Arlington, Texas. Shildt was ejected from the game. (AP Photo)

Cardinals manager Mike Shildt speaks to media on Oct. 10 before the start of the NLCS. Photo by David Carson, dcarson@post-dispatch.com