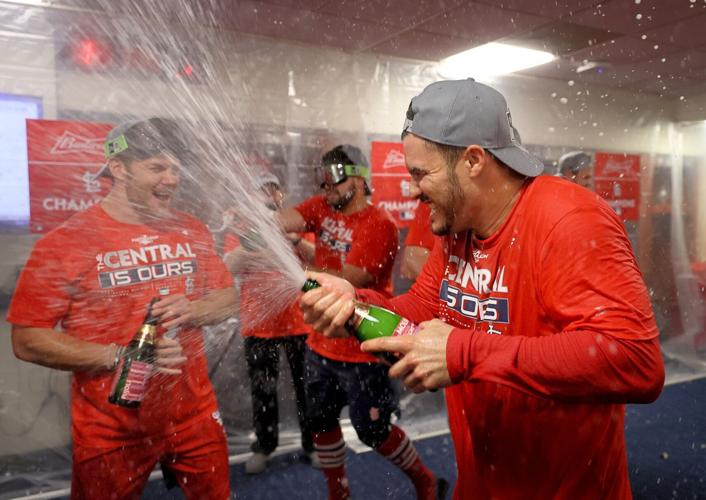 Nolan Arenado celebrates with teammates in the locker room after the Cardinals clinched the National League Central title with a victory over the Brewers on Sept. 27, 2022, in Milwaukee. It was the first division crown of his career. 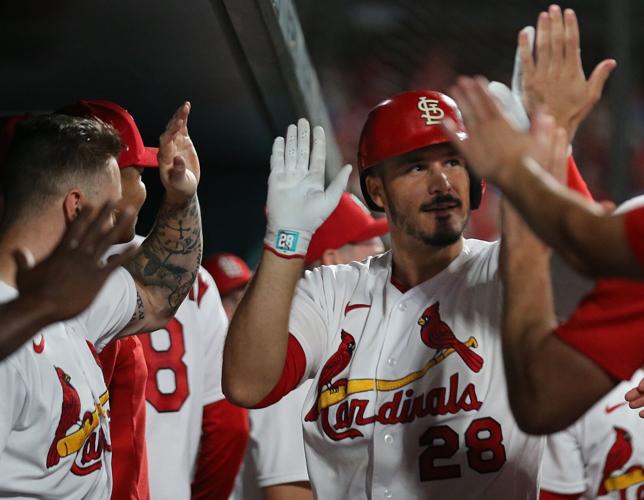 Nolan Arenado celebrates with Cardinals teammates in the dugout on Aug. 12, 2022, after hitting a home run against Milwaukee at Busch Stadium. 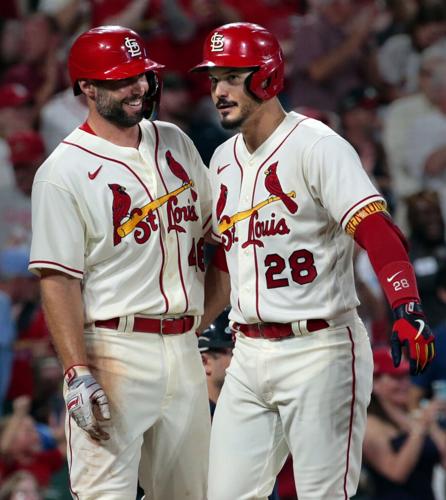 Nolan Arenado crosses the plate to the congratulations of Paul Goldschmidt after hitting a two-run homer in the fifth inning of a game against the Braves on Saturday, Aug. 27, 2022, at Busch Stadium.

Watching from the rows reserved for Cardinals Hall of Famers was Matt Holliday, his still-new red jacket proudly on display.

Did your eyes make it to the Cardinals’ dugout Sunday afternoon, where current players observed the pregame pomp and circumstance of the retirement ceremony for Molina and Pujols?

Nolan Arenado was taking it in.

To be clear, the National League MVP candidate has made no official announcement of how he will handle the second and final opt-out of his contract that arrives after this season ends, and he has indicated that he will say nothing official on the matter until the offseason arrives.

With the stellar season he’s having, it’s natural that Arenado has popped up in coverage and conversation of players who could shake up the free-agent pool if they decide to opt out and grab the leverage an open market can reward. The third baseman has five years and $144 million left on his current deal with the Cardinals. He could eject and seek the highest bidder. He could leverage the Cardinals to sweeten the pot on an updated deal, holding the opt-out over the head of the front office as leverage. Or, he could simply decline the opt-out and play on.

Remember, the Cardinals did add a one-year extension through Arenado’s age-37 season in 2028 as his trade from Colorado was finalized. But that doesn’t change the fact Arenado just produced his second 30-homer, 100-RBI season in St. Louis while playing elite defensively and totaling an adjusted on-base plus slugging percentage of 153, which at 53% above league average marks his career-best figure. So much for that false narrative about Coors Field padding his stats.

Maybe the Cardinals do wind up tacking on some extra deserved dollars.

The departure of Pujols to the Angels after the 2011 season is a reminder of the curveballs that can come. Then again, the return of Pujols combined with this year’s ongoing celebration of Cardinals stars who remained have become powerful lessons about the special relationships baseball stars and St. Louis can share. Mock it if you like. Scoff at it if you please. Deny it, though, and you would be wrong.

Some guys don’t care about anything other than maximizing their earning potential, period. Nothing wrong with that. But Arenado is not one of these guys. If he was, he would not have clashed with the lack of direction in Colorado and coveted what the Cardinals can provide.

He just celebrated his first division championship, after all those dreams of clinching in Colorado.

His second consecutive postseason with the Cardinals in as many seasons on the team will match the number of trips he made during his eight years with the Rockies.

After Arenado begged publicly for Pujols to get a shot at writing a better ending to his Cooperstown-bound career following his ejection from the Angels last season, the DeWitts brought Arenado’s idol home and made him Arenado’s teammate for a final chapter that, if pitched to Hallmark, would have been rejected for sounding too perfect.

Holliday, the Cardinals great who is a big reason Arenado developed such a fondness for the Cardinals, continues to show in real time how starring here can be something that outlasts your playing days. And who knows, maybe Holliday winds up on the staff in some capacity in the coming years. He’s hinted at a developing itch for some sort of role, if the timing becomes right.

Here in St. Louis, Arenado has become a fast fan favorite for a packed park that cheers not just his powerful bat but all of the miraculous things he does on defense, from the plays that drop jaws to the ones that would get overlooked everywhere else. He's a baseball junkie in a town of seamheads. They love him, and he loves them right back.

Don't forget the fast friendship Arenado has developed with MVP competitor Paul Goldschmidt, his strong relationship with first-year manager Oli Marmol and the real-time proof he has received from the organization that rising talent throughout the farm system will help fuel high hopes for years to come, whether through promotions, deals that part with prospects, or a blend of both.

Baseball has a formal process for rejecting opt-outs, and the players’ union doesn’t like players to rush through it for the sake of protecting that process for others. That Arenado has said nothing definitive publicly other than stating his love for the city and the team should raise no concerns.

If he winds up wanting his deal sweetened some, so be it. The Cardinals, thanks to the home-run hitting ATM machine that is Pujols and the 29 sold-out games his successful chase of 700 homers helped produce on a modest $2.5 million salary, have the ability to make it happen, if asked.

It’s easy for me to say — not my dough — but what Arenado could do instead is say he's good with his current contract and ask the front office to direct what he could have leveraged the Cardinals for toward acquisitions that could help increase the team's chances of winning future championships.

The Cardinals did Arenado a favor by rescuing him from the Rockies. Arenado has done the Cardinals a favor by coming through even bigger and better than they could have hoped. By sitting tight with his current deal, it would pressure the front office to put that money to work around him. Saying you don't want to settle for a wild-card playoff spot, as Arenado did this season, is one thing. Arenado telling the front office to swing away elsewhere with what could have been his money would carry more weight.

The Cardinals have areas to address this offseason, whether it’s adding a strikeout-providing star for the rotation, a proven shortstop or outfielder, or a seasoned catcher who can help fill the sizable void Molina’s retirement creates. They don't have to stop at just one of the above. What they should not have to worry about is shopping for a third baseman.

Thanks to a brilliant trade spearheaded by Mozeliak, they have the best one in baseball. And if you saw Arenado watching Sunday's pregame ceremony at Busch, you would be flabbergasted to see him walk away.

Both the Cardinals and Phillies posted losing road records, but only one gets to host each game of this best-of-three series

St. Louis has become the place where one of the game’s biggest superheroes left, lost his powers and regained them upon his return. What does that mean for the future?

BenFred: 700 home runs for Albert Pujols, thanks to a magic Cardinals season that isn’t over yet

BenFred: It’s time for some good news about the Rams relocation settlement money

It's getting hard to ignore what seem to be signs of the region once again self-inflicting wounds due to disorganization and fragmentation.

Quintana and Mikolas, starters for several years now, split Monday's game, and that piggyback approach is one strategy Cardinals could use in wild-card series.

Nolan Arenado celebrates with teammates in the locker room after the Cardinals clinched the National League Central title with a victory over the Brewers on Sept. 27, 2022, in Milwaukee. It was the first division crown of his career.

Nolan Arenado celebrates with Cardinals teammates in the dugout on Aug. 12, 2022, after hitting a home run against Milwaukee at Busch Stadium.

Nolan Arenado crosses the plate to the congratulations of Paul Goldschmidt after hitting a two-run homer in the fifth inning of a game against the Braves on Saturday, Aug. 27, 2022, at Busch Stadium.