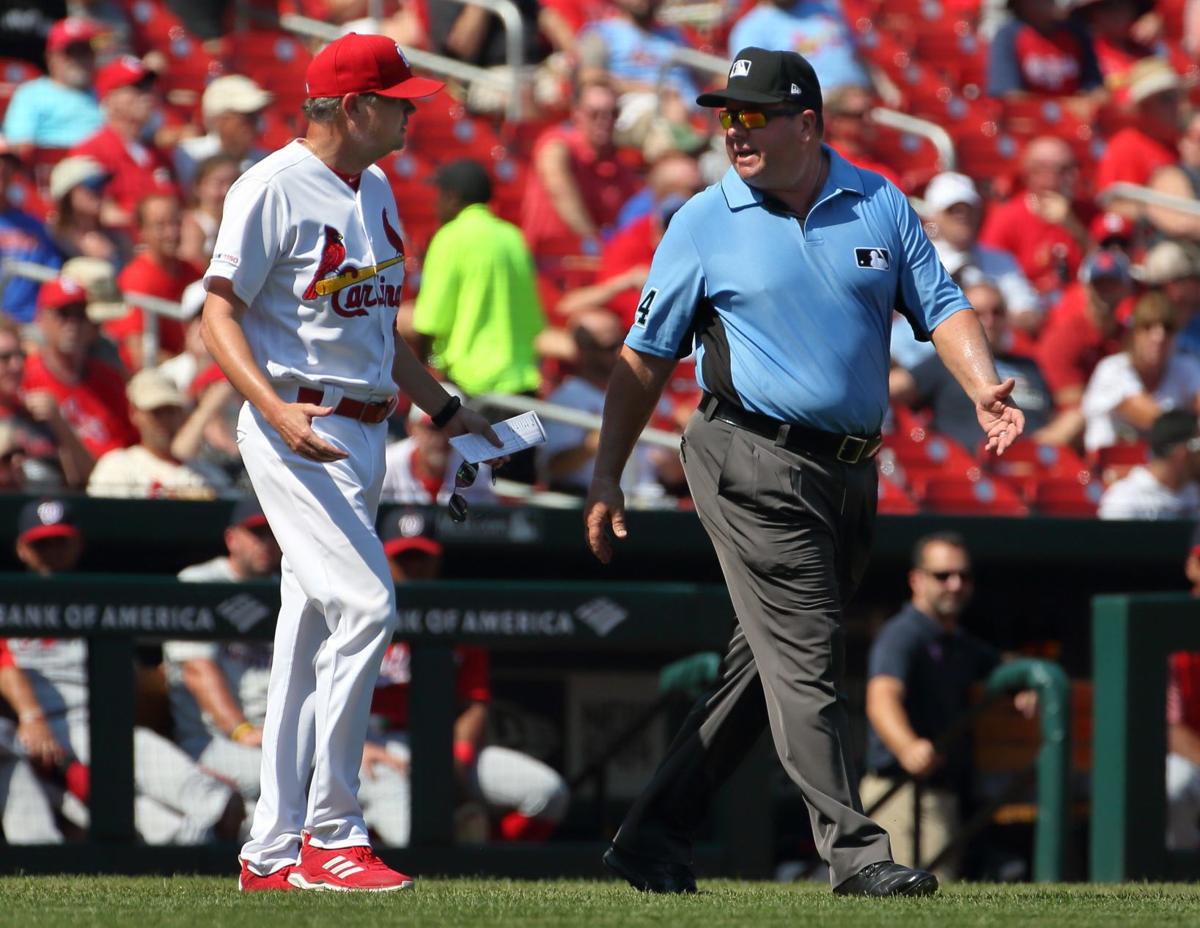 St. Louis Cardinals manager Mike Shildt argues for an interference call with umpire Sam Holbrook during a game between the Washington Nationals and the St. Louis Cardinals at Busch Stadium on Wednesday, Sept. 18, 2019. Photo by David Carson, dcarson@post-dispatch.com 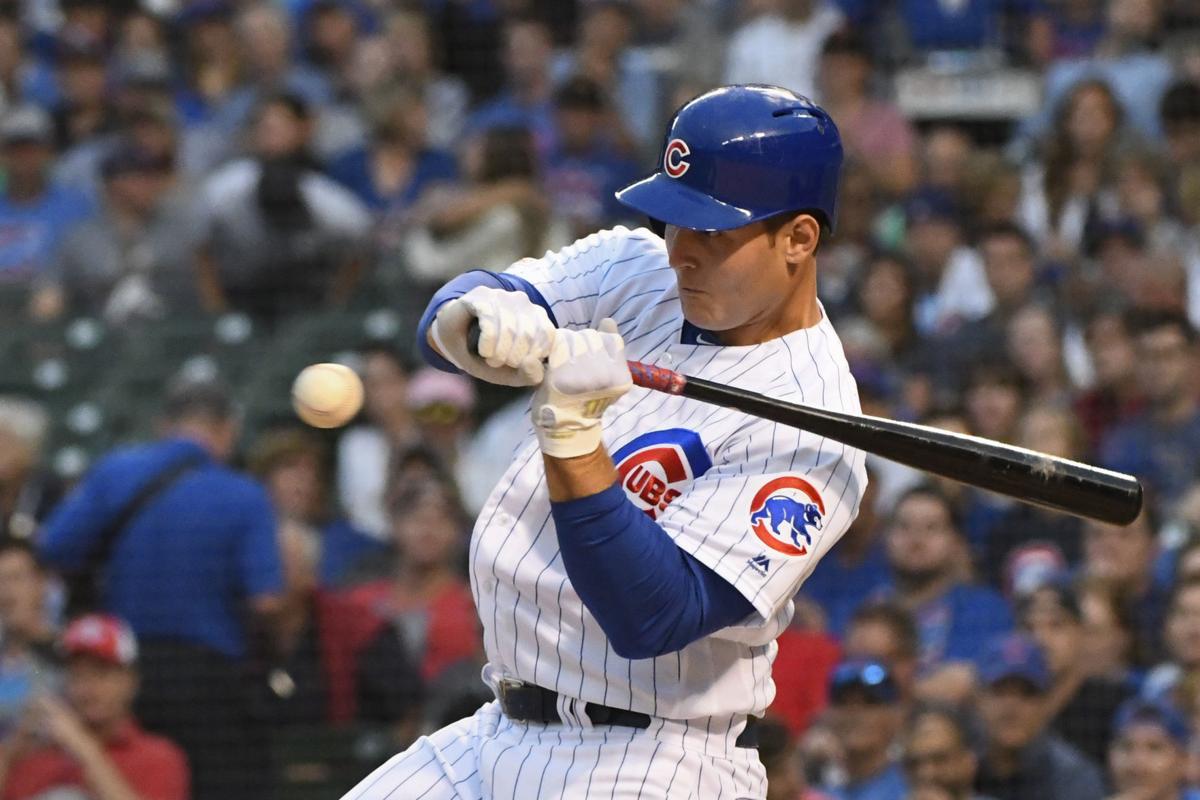 Five topics from columnist Ben Frederickson that St. Louis sports fans should be discussing after the Cardinals’ sweep of the Cubs:

The Cardinals’ first four-game sweep of the Cubs at Wrigley Field since the Warren G. Harding presidency will be remembered for many reasons.

The comebacks. The closeness; each win came by one run. The clinch of the Cardinals’ first postseason appearance since 2015, which is fitting, considering the Cubs dismissed them from that postseason in a game played at Wrigley Field.

Just ask the Cardinals. They were quick to tip their caps to the rival who rushed back from a sprained right ankle and willed himself to one of the more impressive four-game performances you will find from a one-legged player.

“You appreciate people who want to compete," manager Mike Shildt said this weekend.

The hobbled Rizzo went seven-for-14 with one home run, one double and one walk in the Cubs’ four losses.

He struck out just three times.

The Cardinals never found a good way to take advantage of Rizzo’s limited range at first base.

His limping around the bases — he was doubled off once and stopped at third once on a hit that normally would have led to a run — was labored enough that it made you wonder if the Cardinals should start walking him instead of pitching to him.

That said a lot about his hitting.

“I play baseball,” Rizzo told reporters in the Cubs clubhouse. “Leave it on the field. That’s what you do as a competitor.”

Dexter Fowler had a better word.

“The guy is a titan,” Fowler said about his former teammate and close friend. “I didn’t expect anything less from him. Good friend of mine. We have similar mindsets. Whatever it takes to win. I knew he was going to be out there at some point.”

2. You weren't the only one who questioned Zobrist's dancing

It became a minor talking point because of the sweep, but Shildt did confirm that the Cardinals had a conversation with umpires about Cubs second baseman Ben Zobrist’s antics behind the mound when he was shifted there, in the line of vision for Cardinals’ hitters.

Zobrist always moves around a lot in the infield, but there was clearly a difference between his movements depending on where he was standing.

The closer he was to a hitter’s line of vision, the more adamant his bouncing became.

There is a rule for this, but it hinges on intent. The player has to be clearly trying to distract before umpires step in.

It’s clear the Cardinals thought the rule should be applied in this case. Catcher Yadier Molina was the first to speak up. Go figure.

But the umpires did not stop Zobrist. He pulled the same trick at least once in Sunday’s series finale.

The entire thing reminded me of something an overzealous Little League coach would suggest to his players.

“We noticed it, if that’s what you’re asking,” Shildt said Sunday. “There is (a rule against it). Honestly, I’ve never really experienced it. We mentioned it (Saturday). If he’s going to move and be ready, he pretty much does that fairly consistently. But when you move side-to-side, that’s an issue.”

Cubs fans are wondering if hot-seat manager Joe Maddon will be back next season.

The pending free-agent outfielder who has been on fire for the Cubs since he was traded from Detroit was, like Rizzo, a force in this series.

Say the Cardinals clinch the National League Central against the Diamondbacks on Wednesday. Those who are not able or willing to watch the game on YouTube are going to miss out, thanks to the exclusive YouTube broadcast.

I realize accessing YouTube is no problem for most folks. I also realize it is a challenge for some, especially older generations and/or those who do not have reliable and high-speed Internet access.

This is like the Blues' mobile ticketing debate all over again: Great as an option. Bad as the only option.

Assuming everyone has the same online capabilities is an inaccurate assumption. MLB could fix this by putting games on Facebook and YouTube without blocking the regular broadcasts. That invites new fans without stiff-arming others, though it might mean taking a smaller check from YouTube and Facebook.

Now that Royals manager Ned Yost has announced his retirement, the widely-held assumption is that former Cardinals manager Mike Matheny will fill his spot.

Here’s the latest from Lynn Worthy of the Kansas City Star: Despite speculation that the Royals will hire former Cardinals manager Mike Matheny, who served as a Royals special adviser for player development this year, as Yost’s successor, the Royals are not expected to move quickly to hire a new manager headed into an offseason of transition that includes the pending sale of the franchise.

Matheny’s record, postseason experience, status as a former player and relationship with Royals general manager Dayton Moore will help his chances of getting the job.

Matheny's bristly nature with the media will not play well if paired with a team that does not win. But perhaps the combination of time away from the manager’s seat, a fresh start and different organization could make things better for Matheny this time around.

More than anything, the Royals might want to look into how the Cardinals have responded on the field since Matheny was replaced by Shildt.

Errors are down. Baserunning is vastly improved. The style of play has sharpened.

Some of that is roster-related.

Cardinals hit four home runs, including Goldschmidt's 100th at Chase Field, and Carlos Martinez gets his 24th save to lower magic number for the division crown to three.

BenFred: Unsatisfied Cardinals believe reaching the playoffs 'is only the start'

The Cardinals captured a historic sweep here Sunday, then announced big plans for the postseason before the champagne stopped fizzing.

Champagne in the clubhouse goes mostly untouched because, as starting pitcher Miles Mikolas said, 'We've got bigger fish to fry and bigger dreams to make happen. Playoff berth is great. ... We want the division. That's what we're going to get.'

St. Louis Cardinals manager Mike Shildt argues for an interference call with umpire Sam Holbrook during a game between the Washington Nationals and the St. Louis Cardinals at Busch Stadium on Wednesday, Sept. 18, 2019. Photo by David Carson, dcarson@post-dispatch.com