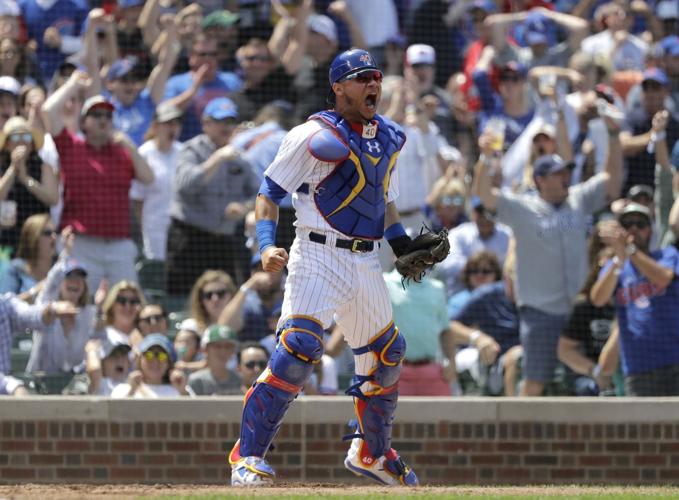 Cubs catcher Willson Contreras celebrates after tagging out the Dodgers' Chris Taylor at home off a throw from right fielder Jason Heyward to end the top half of the third inning of a game Wednesday, June 20, 2018, in Chicago. 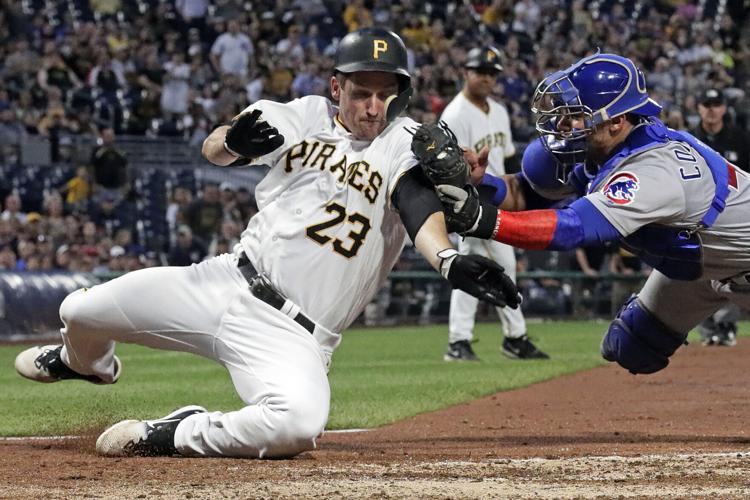 Cubs catcher Willson Contreras, right, dives to tag out the Pirates' David Freese, who was attempting to score from second on a single by Francisco Cervelli off Cubs starting pitcher Jon Lester, during the fifth inning of a game in Pittsburgh on Tuesday, July 31, 2018.

Let’s take some time off (for a moment) from talking about Willson Contreras’ offense.

We know his bat is powerful. Especially for a catcher. If you go by adjusted on-base plus slugging percentage, or OPS+, Contreras’ stick during a seven-season run with the Cubs produced 15% better offense than the league average catcher during that time.

For comparison, future Hall of Famer Yadier Molina during that same span produced an OPS+ of 8% below average. Since the start of the 2019 season, so the past four seasons, Contreras produced one season (2019) that was 27% above average and another (2022) that was 28% above average, and he did it between two not quite as strong but still above-average seasons.

Last season, the Cardinals from the catcher position ranked 28th in catcher provided on-base plus slugging percentage (.552). Contreras produced an OPS of .815, checking in above .800 for the fourth time in a career that has included four 20-plus homer seasons.

The Cardinals will benefit from a big boost of offense at a catching position that had not been providing much lately. Contreras doubles. He homers. He slugs and drives in runs. A lineup that needed protection will get some from the addition of this hard-contact causing catcher. There’s not much to discuss or debate on this front.

But what about his defense?

That’s where I really wanted to dig in today, while we wait for Contreras to be officially introduced in a news conference tentatively scheduled for Friday. Some concerns are more than fair. Others seem significantly overblown.

Right away, yes, Contreras’ pitch-framing has scored poorly in metrics that measure it. But as Bernie Miklasz recently noted, the same Statcast metric that pummeled Contreras for his pitch-framing early in his career has considered him slightly better than average at it since the start of the 2020 season. The art of pitch framing could be neutralized in the future if the automated strike zone arrives, and that will probably happen before Contreras’ five-year contract with the Cardinals expires. Pitch framing is his biggest stat-proven weakness. It’s improved. And the skill could be taken off the shelf for all catchers as soon as 2024, depending on how rules change.

Fielding Bible’s total runs saved aims to capture a catcher’s complete defense. Contreras over the past five seasons has never finished a season worse than one run below average and has finished as high as eight runs above average. His combined total runs saved over the past half-decade is a plus-10. Molina’s during the same time frame was plus-14.

I’m not suggesting this metric captures everything a catcher does. Many things — like Molina alerting the dugout when a pitcher doesn’t look right — simply can’t be measured. But it’s another sign some of the wailing about Contreras’ defense has been a bit much.

Contreras’ pop time behind the plate is above average. He’s more than comfortable back-picking bases, like Molina did expertly. His arm, as then Cubs manager Joe Maddon said during the 2016 World Series, “is one of the most premier arms in either league.” His blocking of pitches in the dirt is solid. All of these factors help him control the run game, and that aspect is going to be more important moving forward. Bases are getting bigger to encourage more steals. Pickoff limits for pitchers will have the same effect. Contreras’ career caught-stealing percentage is 30%. Last season Molina, a master at the craft, was the only active catcher with a career percentage of 40 or more. Contreras is above average in this department. He’s not Molina, but no one is.

Perhaps the greatest area Contreras will be asked to grow — and this is something he wants and expressed to the Cardinals during his conversations with them — is in managing the game, calling pitches, and finding his own version of the presence Molina made for decades. The Cardinals can help him there, and he wants that help. His burning desire to both win and improve from where he is now impressed the Cardinals in those talks.

The Cardinals know pitching. The Cardinals know defense. The Cardinals were willing to tweak their catcher model to gain more offense, but they’re not going to abandon it entirely, and they would have gone elsewhere if they felt Contreras was simply a hitter hiding behind a mask. They vetted Contreras vigorously. They liked what they discovered beyond what they already knew about the division rival. He puts in the work, and wants to master his craft in a baseball-crazed city that will turn the right catcher into an icon.

The Cubs, no offense, are not exactly known for known pitching and defense. And considering how they have dismantled their championship core piece by piece, I’m not sure they should get the right to define Contreras as a player just because they didn’t want to fork over the cash to keep him. Nothing’s wrong with Contreras, just like nothing is wrong with Anthony Rizzo. Something is wrong with the Cubs. They will go cheaper at catcher moving forward. They can call it something else, but that’s what they’re doing.

It should not be overlooked those same Cubs started Contreras in five of seven World Series games, the only two coming when Jon Lester started, and Lester always used personal catcher David Ross. And when Ross retired, Contreras became Lester’s guy. The two grew close. So close that as the Cardinals started leaning toward Contreras — in part because of a staggering trade price set by Oakland for Sean Murphy, and in part because of a great meeting with Contreras in Florida — a phone conversation with Lester helped solidify Contreras as the catcher the Cardinals decided they would not leave the winter meetings without.

Contreras’ bat bops for the position, and the new lineup it just joined really needs the help.

Sure, he can be an occasional designated hitter. And he’s bounced around the field at times. But these asks are not what the Cardinals signed him to do or be. Contreras longed to be viewed as a cornerstone, primary catcher for a team that valued the role and believed he could hold it. Here’s his chance. It’s on him to prove the knocks on his defense were alarmist. No one should be surprised if he does.

"Make it happen," Contreras told his agent. "This is the right place for me."

Cubs catcher Willson Contreras celebrates after tagging out the Dodgers' Chris Taylor at home off a throw from right fielder Jason Heyward to end the top half of the third inning of a game Wednesday, June 20, 2018, in Chicago.

Cubs catcher Willson Contreras, right, dives to tag out the Pirates' David Freese, who was attempting to score from second on a single by Francisco Cervelli off Cubs starting pitcher Jon Lester, during the fifth inning of a game in Pittsburgh on Tuesday, July 31, 2018.