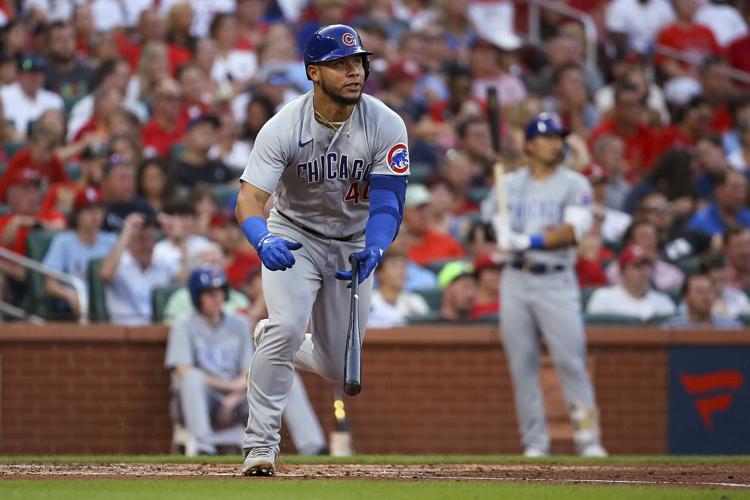 The Cubs' Willson Contreras watches his triple against the St. Louis Cardinals during the third inning of a baseball game Tuesday, Aug. 2, 2022, in St. Louis. 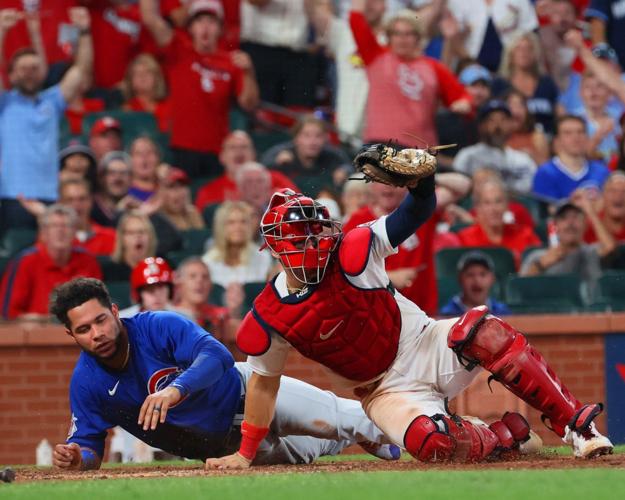 Cardinals catcher Andrew Knizner stops Cubs catcher Willson Contreras at home plate on Friday, Oct. 1, 2021, after a throw by Tyler O'Neill in the ninth inning of a game at Busch Stadium in St. Louis, Mo. 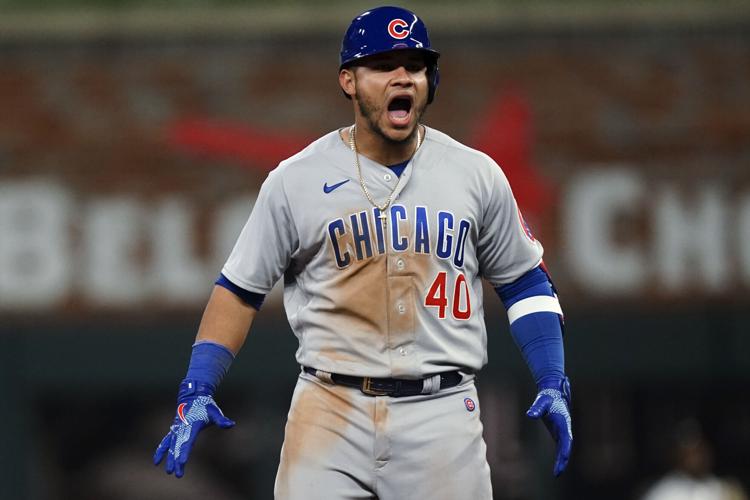 Cubs catcher Willson Contreras, who is in his seventh big-league season, entered the weekend hitting .242 with two home runs and seven RBIs this year.

The Cardinals are not going to sign every free agent their fans are clamoring for this offseason.

President of baseball operations John Mozeliak and his lieutenants are following the shortstop market, and could be poised to jump in if the churn presents a chance to strike at a preferred price point, but that process likely takes a long time to play out, and the hot stove is just starting to warm.

The Cardinals can and will use trades to bolster their team as well, and their biggest additions in recent seasons — Paul Goldschmidt and Nolan Arenado — have arrived via that route. No one is complaining that they were not free-agent signings, at least as far as I can tell.

The Cardinals will continue to keep an eye on the here and later, as they always do, factoring in the timeline of fast-rising prospects like Jordan Walker and Masyn Winn into their decisions.

While they have proclaimed a rise in payroll, as they should considering the fan support that flooded the ballpark last season, that news does not mean Cardinals chairman Bill DeWitt Jr. is suddenly going to try to beat Mets owner Steve Cohen in a spending spree. But the Cardinals can certainly afford to be as aggressive as they choose to be. That has always been the case, and if it was debatable during the pandemic-caused limitations it no longer is now.

Let’s proceed, digging in a bit more on three non-shortstop (for now) free-agent options who deserve a long, hard look from the Cardinals as they figure out how to address their obvious areas of need: a primary catcher, lineup protection for Goldschmidt and Arenado, and some more strikeout stuff for the pitching staff.

Willson Contreras: A trade could be the catcher play for the Cards, considering Sean Murphy’s availability in Oakland and the Blue Jays’ surplus of talent at the position, but two compelling options are available as free agents, one more expensive than another.

The Astros just won the World Series with trade-deadline addition Christian Vazquez, who is entering his age-32 season with the prestige of shepherding an elite Houston pitching staff to a parade.

As a pitch-caller and defender, Vazquez scores high marks. As a hitter, not so much. His .265 average over the past two seasons has been accompanied by a .311 on-base percentage and a .374 slugging percentage. Like the Cardinals lineup, the right-handed hitting catcher tends to tail off against right-handed pitching, where his career OPS drops to .682. If the Cardinals want to take their best shot at replicating the strengths of the retired Yadier Molina, Vazquez could be a good move.

If they want to seek more offense for a lineup that could use it? Contreras is available and interested entering his age-31 season.

The champion Astros were on the cusp of trading for Contreras at the deadline before they pivoted to Vazquez, and they are once again showing interest in Contreras.

He is not a Gold Glove winning backstop, but critics of the three-time All-Star’s defense and pitch-framing tend to go a little overboard.

Compared to Vazquez, for example, Contreras has a similar pop time and caught-stealing percentages. He has a rocket right arm. And he hits.

Contreras, an ex-Cub, understands what the Cardinals are about and would be fired up to play for an organization that values his position.

Fair concerns: Clubs hunting catchers at the trade deadline passed on Contreras, which stirred some whispers about his ability to blend in with a new team. The Cubs stuck him with a qualifying offer, meaning the team that signs him now suffers a draft-pick penalty. He’s been a better hitter at Wrigley Field than on the road.

Brandon Nimmo: Is he Aaron Judge? No. What he is, though, is a proven left-handed leadoff hitter with outfield versatility who has produced doubles and triples while posting three consecutive seasons of an .800-plus OPS in a market that puts players squarely in the high-pressure spotlight.

Over the past three seasons, Nimmo has cranked out an .827 OPS over 1,284 plate appearances. The only Cardinals with more plate appearances during that span and a higher OPS? Paul Goldschmidt (.923) and Nolan Arenado (.833).

Nimmo is a smart hitter who grinds pitchers and minimizes strikeouts, and he could take leadoff pressure of Tommy Edman and Brendan Donovan.

Fair Concerns: Nimmo was stuck with a qualifying offer by the Mets, meaning the team that signs him will pay a draft-pick penalty. He’s repped by super agent Scott Boras, who will try to convince the world Nimmo is Babe Ruth. Also, and this is a big one, reliability. Nimmo’s 151 games played this past season was a career-high, and marked just his second in a seven-year career in which he surpassed 100 games. If he earns a five-year deal, can he stay on the field and in the lineup? The Cardinals have enough outfield injury worries in Tyler O’Neill alone.

Justin Verlander: Short-term contracts with high annual value are becoming more common for elite players who know their age makes long-term commitments unrealistic. The Cardinals, who have had good luck betting on the right veterans, should size up their fit with Verlander, who is still going strong entering his age-40 season. All the right-hander did last season was return from Tommy John surgery to post an 18-4 with a 1.75 ERA while striking out 185 in 175 innings pitched. Verlander still offers elite upside with the benefit of a short-term commitment, if a club can stomach the high per-year cost. The Astros looked brilliant for signing him to a one-year, $25 million deal with a player option entering last season. He opted out, knowing he can get more now, whether he goes back to Houston or elsewhere, and he has the benefit of not being tethered to qualifying offer baggage. The Cardinals don’t need a starter if they’re only going to add middle-rotation depth. They could really use a strikeout-producing ace, and Verlander checks that box without the kind of multi-year commitment fellow free-agent Carlos Rodon could command.

BenFred: What those adamant about Blues bringing David Perron back got right (and wrong)

Would things look different for the Blues if he was here?

BenFred: Javonte Perkins is back, and his Billikens basketball team should be ranked

It's hard to believe there are 25 teams in college basketball better than this St. Louis Billikens men's basketball squad.

Ben Frederickson: BenFred: Battlehawks can no longer be fueled by Kroenke hate, but could soar for Becht

Connor Thomas finished the Arizona Fall League with a league-high 34 strikeouts and a 1.75 ERA — the second-lowest for starters.

The Cubs' Willson Contreras watches his triple against the St. Louis Cardinals during the third inning of a baseball game Tuesday, Aug. 2, 2022, in St. Louis.

Cardinals catcher Andrew Knizner stops Cubs catcher Willson Contreras at home plate on Friday, Oct. 1, 2021, after a throw by Tyler O'Neill in the ninth inning of a game at Busch Stadium in St. Louis, Mo.

Cubs catcher Willson Contreras, who is in his seventh big-league season, entered the weekend hitting .242 with two home runs and seven RBIs this year.