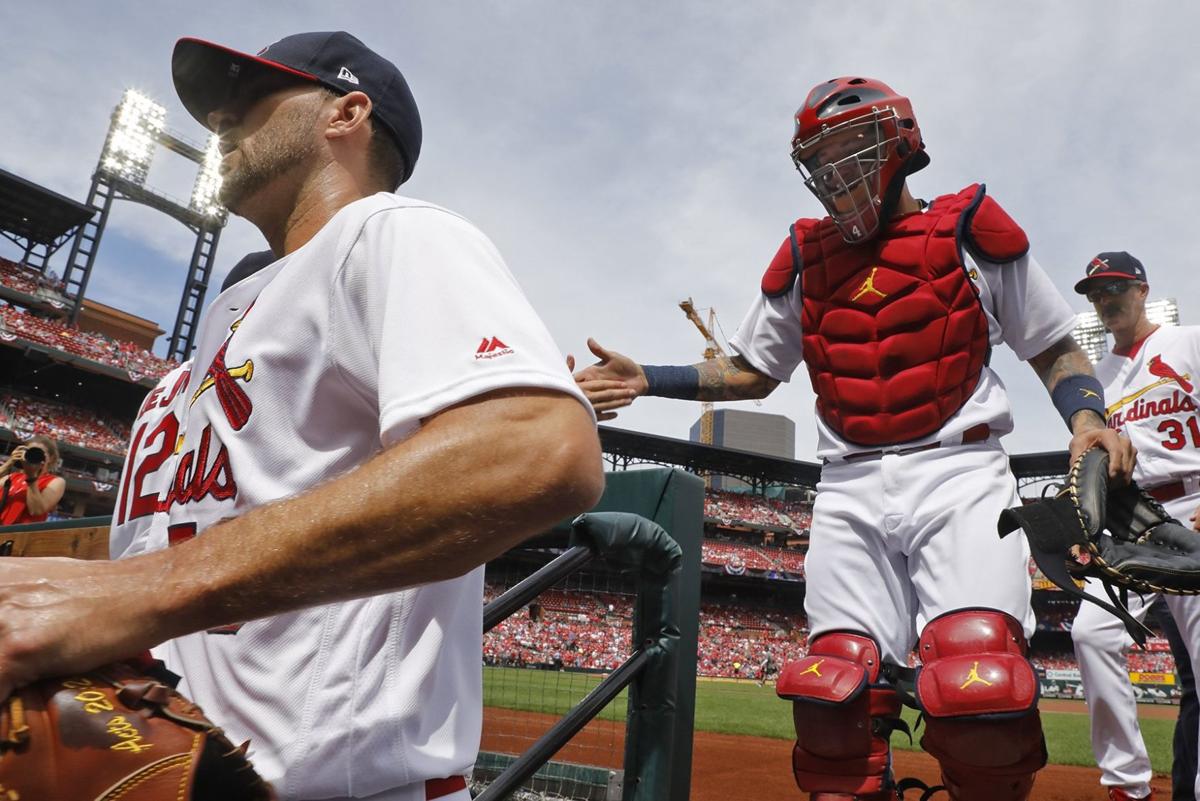 Starting pitcher Adam Wainwright and catcher Yadier Molina, after warming up before the start of a game at Busch Stadium last season. (Post-Dispatch photo by J.B. Forbes) 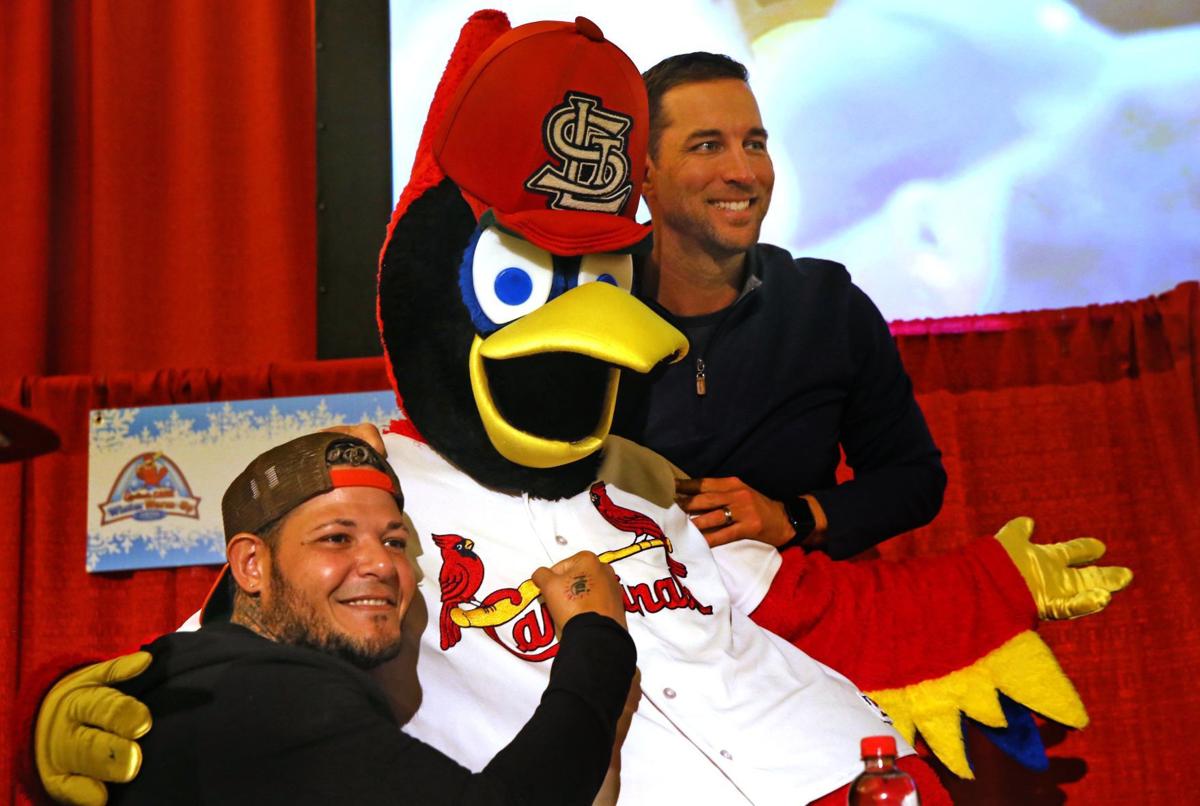 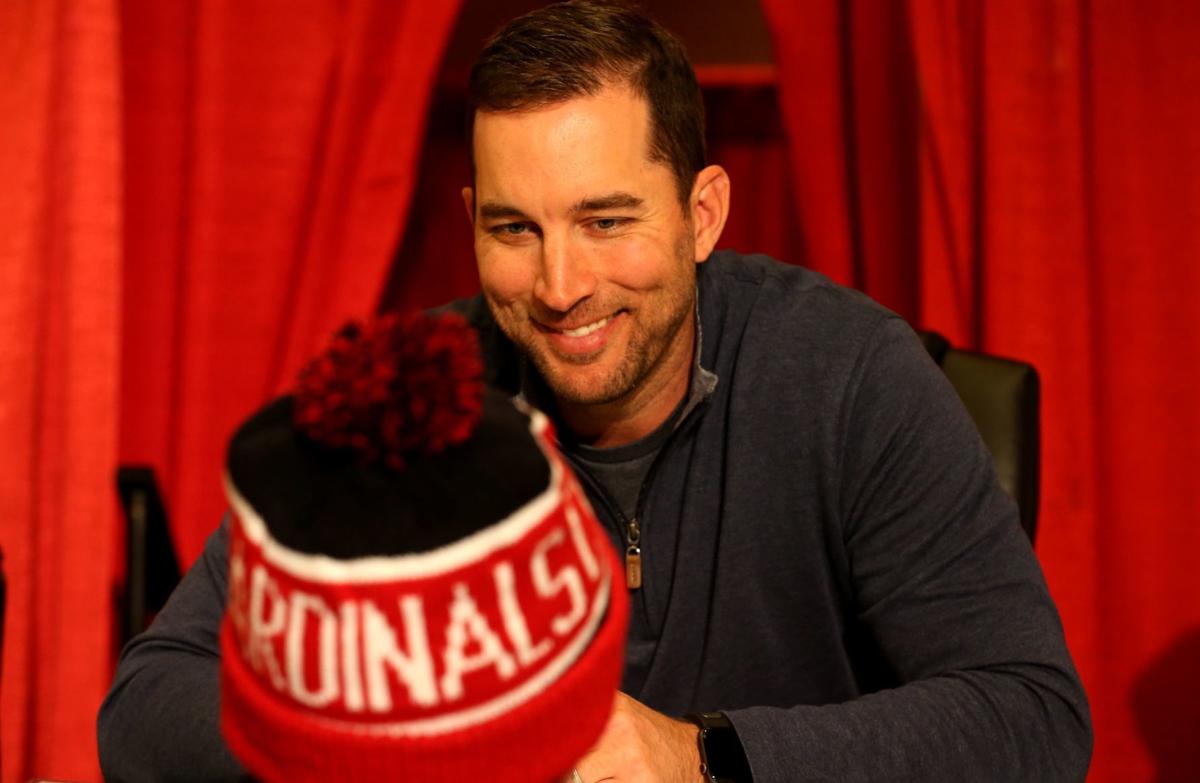 Adam Wainwright was in the middle of the umpteenth Winter Warm-Up media session of his career, and someone was determined to interrupt.

He answered the FaceTime call on his cellphone.

“We’re waiting for you, bro,” said a grinning Yadier Molina from an autograph booth in another room at the Hyatt Regency.

“I’ll be there in a second,” Wainwright said, blowing a kiss toward his 37-year-old catcher before ending the call.

Appreciate them now as much as you will miss them when it ends.

“It’s pretty incredible, when you think about what the two of them have done together,” Cardinals chairman Bill DeWitt Jr. said. “They will continue to add to their legacy this year.”

Wainwright and Molina. Yadi and Waino. Season No. 15 shared between No. 50 and No. 4 could be the final one.

Or perhaps it’s the penultimate.

Or maybe these Cardinals legends are really robots, and this baseball battery will continue to recharge every offseason until the word turns into dust.

“We just go day by day, and year by year,” Molina said. “We are just trying to win. That’s our goal. It’s possibly our last year together, but we don’t think about it. We try to stay focused on the moment. Try to win another ring.”

The problem with assuming something good will last forever is that one day you look up and it’s gone.

The problem with obsessing about the end of the line is that you miss the sweet stuff happening here and now.

Stuff like Molina pairing with his “brother” Wainwright to raise relief funds for earthquake victims in Molina’s home of Puerto Rico.

Stuff like Molina and Wainwright not having to worry about the electronic sign-stealing scandal that has turned baseball upside down because they can relay pitching signals via body language.

If I predicted on the first day of the 2019 Winter Warm-Up that Wainwright would be talking on the last day of 2020 Winter Warm-Up, how many would have agreed?

“I don’t even think he was sure what was left,” DeWitt said. “He really had a nice year for us. Now, we are counting on him. He’s resilient. A great competitor. A great talent. He has been a great Cardinal.”

Wainwright spent 2019 quieting his critics again, at least the ones who didn’t keep moving the goalposts. He went 14-10 with a 4.19 ERA in 31 starts and 171.2 innings. He had his most starts and innings pitched since 2016. He had his most wins and lowest ERA since an All-Star season in 2014. During a second half that included no reservations about his health for the first time in years, he posted a 9-3 record and a 4.07 ERA. Not good enough, he says.

“I’m excited this year to prove that I can be better than I was last year,” Wainwright said. “I know I can go out and be successful. But successful in my eyes looks a little better than it did last year, performance-wise.”

An hour or so later, Molina appeared in the room Wainwright was in when the catcher called him.

Molina once said he would retire at the end of his current contract. That deal ends after his upcoming season. Molina says gas remains in his tank.

As of today, he feels like he could play two more seasons. But he has zero interest in playing for another team, and he won’t if an agreement can’t be arranged. He did not sound opposed to a year-to-year situation like the Cardinals have taken with Wainwright. A short extension would not be surprising this spring.

“If they want to move apart, that’s it for me,” Molina said.

“We will get the lay of the land and take it as it goes,” DeWitt said. “I know in his mind, he thinks he can play for a number of years, and that would be great if he can.”

“If anybody asks me what my plans are for the future, I really don’t have an answer for you,” said Wainwright.

They will play as long as their minds and bodies tell them yes, and as long as the only team they’ve ever played for in the majors tells them they are wanted.

Contracts have taken a back seat to championships.

Their legacies are part of their value.

“To have another ring,” Molina said. “That’s the goal for me, all of my teammates and the city. Try to prove people wrong, like always. It’s easy to see a 37-year-old catcher and you say he’s going to have bad year because he’s 37. I have that in my mind.”

Considering Wainwright can read Molina’s mind, it should not be surprising he looks for the same signs.

“Seemingly I respond well when people have their doubts, right?” Wainwright said. “Sometimes I intentionally take something personally that wasn’t meant to be personal, to drive me. You all have been on the blunt end of that a few times. I’m going to do the same thing again this year and apologize later about it.”

You asked for it.

You two are too old. Washed up. Injury prone.

It’s a young man’s game, and you guys haven’t been young for years.

Father Time is undefeated, and he grows stronger by the day.

Hochman: Lane Thomas will make an impact on 2020 Cards. How much and how soon?

The righthanded-hitting outfielder had a .409 OBP in 44 plate appearances for St. Louis.

Starting pitcher Adam Wainwright and catcher Yadier Molina, after warming up before the start of a game at Busch Stadium last season. (Post-Dispatch photo by J.B. Forbes)