Subscribe
Read Today's E-Edition
Share This
BenFred: What happened to Paul Goldschmidt in September? The National League MVP is on the case
0 Comments
Share this
1 of 2 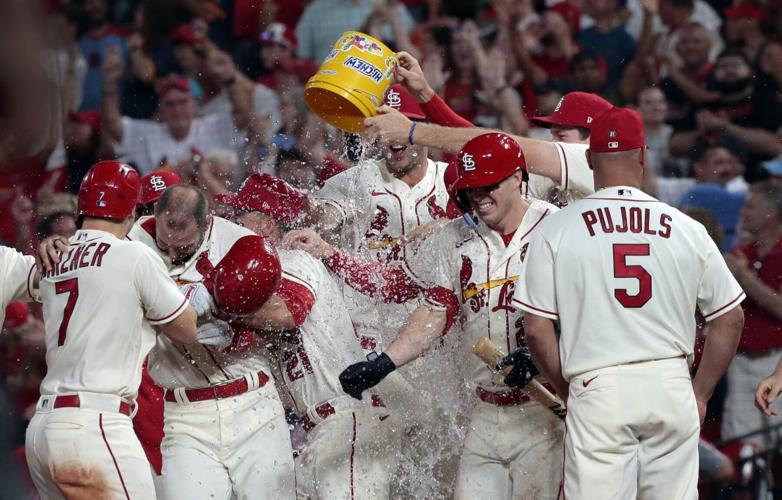 St. Louis Cardinals players mob Paul Goldschmidt alongside base runner Andrew Knizner, who scored the winning run as Goldschmidt reached on a fielder’s choice with a throwing error by Cincinnati Reds Nick Senzel to end the game in 11 innings on Saturday, Sept. 17, 2022, the second game of a doubleheader at Busch Stadium. 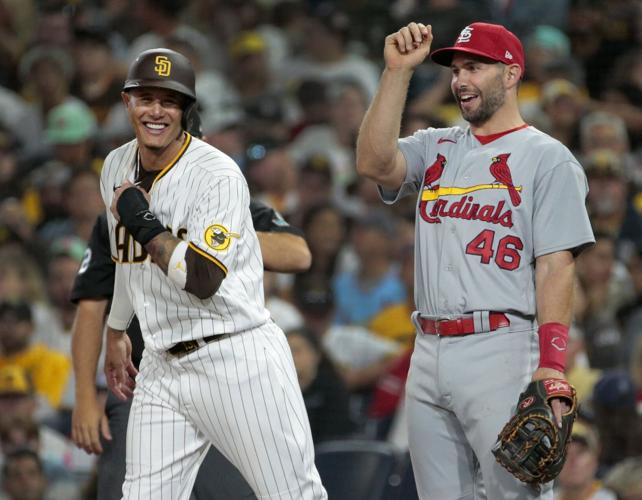 If it was any other player, the topic probably would have been, at the best, uncomfortable and, at the worst, upsetting.

Chances are it would have been glossed over, danced around or just flat out ignored.

Here was first-time National League MVP winner Paul Goldschmidt on the evening of receiving an honor he had come oh so close to winning in the past before falling just short. Not this time. After three previous seasons in which he finished in the top-three of NL MVP voting, Goldschmidt was finally number one.

This was a night for celebration for the Cardinals and their first baseman. It felt almost wrong for the conversation to veer away from that in any way, shape or form. Except Goldschmidt led it there.

Not once. Not twice. Multiple times.

On MLB Network. On Bally Sports. On a half-hour phone call with baseball writers that followed.

“It was a disappointing end of the year,” Goldschmidt said seconds into his Thursday night conference call.

The Cardinals’ first baseman made it clear he can both celebrate his well-deserved honor while also evaluating why the most important stretch of his club’s season coincided with the most frustrating part of his sensational individual performance.

The 2022 Cardinals season was a special one that produced the NL MVP in Goldschmidt, a finalist in third baseman Nolan Arenado and one of the best stories in baseball in the sendoff of retiring Albert Pujols, who appeared on the MLB Network broadcast to announce Goldschmidt as the MVP winner while Arenado clapped on air. Pujols had been the Cardinals’ last MVP recipient. He passed the baton to Goldschmidt as the world watched. What a moment.

Goldschmidt believes this past age-34 season was his best season ever, and the overall numbers back that up. But what the heck happened to the NL MVP in September? Goldschmidt is on the case, and he wanted to make that clear.

“The question, to be very honest, is to figure out if it happened because it was the end of the season where I didn’t play well, or if the season would have been another month longer, if I would have played well the next month and never thought about it,” Goldschmidt said.” Because there are going to be struggles. So, I don’t have the 100 percent answer. But I’m definitely trying to see what I can adjust in my off-field training to make sure I stay fresh throughout the whole year the best I can. I didn’t feel fatigued or tired in September. I felt fresh. I felt good. But I’m always looking to say maybe there was something I missed, or maybe something I could improve on. Same thing with hitting and my swing. It wasn’t where it needed to be. But there are plenty of games and times throughout the year where it doesn’t feel great, then you go get two hits and a walk, and nobody knows the difference.”

The hope was Goldschmidt’s swing would click again in the postseason. It didn’t happen. He went hitless in seven at-bats and struck out four times in the Cardinals’ Wild Card Series loss to the Phillies.

“I came up with guys on base,” Goldschmidt said. “I feel like if I could have gotten the job done we could have won that series, and gone on and had a chance to win. But that didn’t happen.”

Goldschmidt’s training for 2023 started less than a week after the Phillies bounced the Cardinals. He has been communicating with newly promoted Cardinals hitting coach Turner Ward about some things he could do differently moving forward after reflecting on the parts of the season where his swing was most locked in. Newly hired bench coach Matt Holliday could be lots of help as well. Small calibrations, not wholesale changes, are the goal. Considering the player who has become the Cardinals’ go-to example for how players should prepare for games and take care of their bodies figured out how to produce his career-best year at the age of 34, it would seem Goldschmidt has as good of a chance as any veteran of solving this September riddle.

A bigger one awaits.

It’s winning a World Series, and the Cardinals will need Goldschmidt at his best in crunch time to make it happen for the first time since 2011.

Even on the night of his biggest individual accomplishment, Goldschmidt made that point himself.

“The expectation is to win the division and win the World Series, every year,” he said. “That’s an awesome place to be. There’s no reason we shouldn’t have that opportunity next year. That’s going to be the goal.”

St. Louis Cardinals have won the MVP award 21 times. Here are each of those seasons.

St. Louis City SC has weathered more than a cold opener, and it should be in a better spot than most MLS expansion teams because of those obstacles.

BenFred: These 3 non-shortstop free agents should get long, hard look from Cardinals

The hot stove is just starting to warm, but potential fits are out there

St. Louis Cardinals players mob Paul Goldschmidt alongside base runner Andrew Knizner, who scored the winning run as Goldschmidt reached on a fielder’s choice with a throwing error by Cincinnati Reds Nick Senzel to end the game in 11 innings on Saturday, Sept. 17, 2022, the second game of a doubleheader at Busch Stadium.