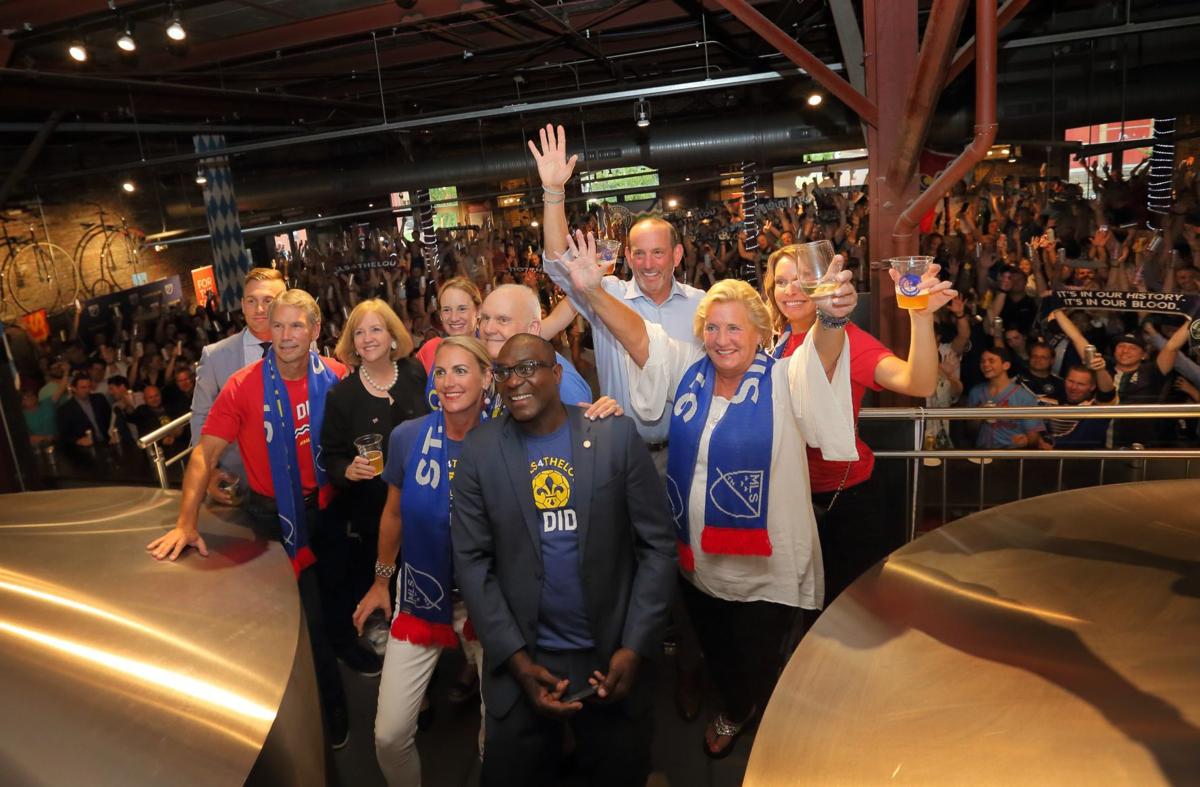 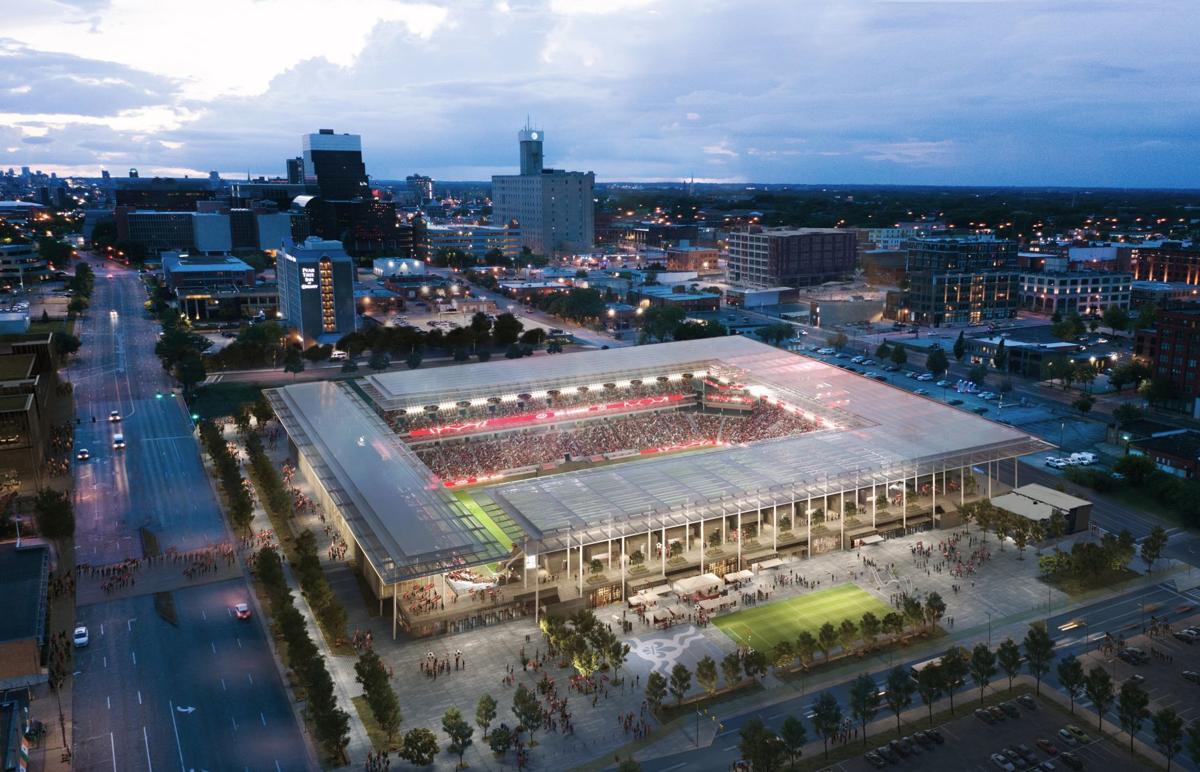 A view of the planned MLS stadium looking northwest from 20th and Market streets, according to renderings obtained by the Post-Dispatch. The facility is being designed by HOK of St. Louis and Minneapolis-based Julie Snow. 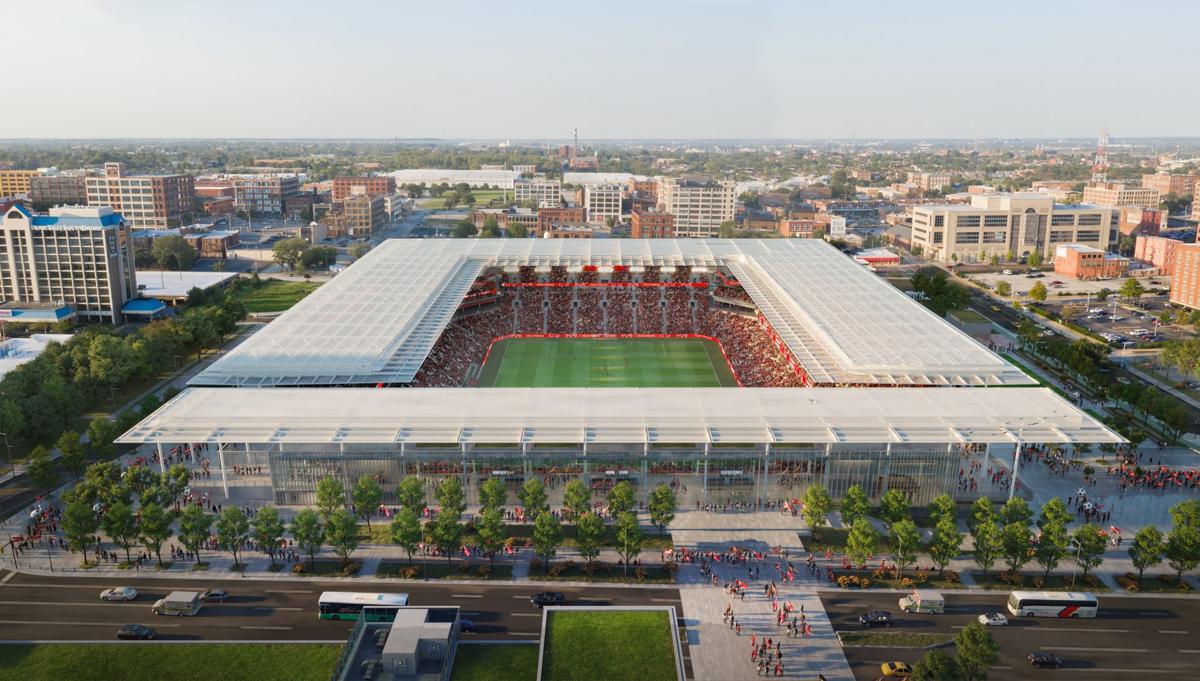 A view of the planned MLS stadium looking north at Market Street, according to renderings obtained by the Post-Dispatch. The southern edge of the stadium will be flexible space that can be used for events. The facility is being designed by HOK of St. Louis and Minneapolis-based Julie Snow.

You don’t visit the Post-Dispatch sports page to read about politics.

Problem is, Mike Parson did not stick to the soccer plan for St. Louis, which means he has some explaining to do.

Parson never took a knee. He just kept standing in the way. He either didn't care or didn't realize how bad it looked.

Parson is standing in the way again.

Someone should tell him how bad it looks.

This has nothing to do with left or right, liberal or conservative, red or blue.

It’s about the importance of following through, and a governor who did not.

The Missouri Department of Economic Development's rejection of $30 million in tax credits requested by the city’s economic development arm should be interpreted as a slap in the face to St. Louis and the MLS4TheLou ownership group.

It traces back to Parson.

The governor was once such a relied upon supporter of the MLS4TheLou expansion effort that his name was among those the ownership group submitted to the league as proof this project would work. But when it came time to turn talk into walk, Parson pulled a disappearing act.

He didn’t just strand the St. Louis leaders who considered him an ally. He embarrassed them.

In what appears to be an attempt to score Parson political points with a crowd that is allergic to nuance, three members of his cabinet torpedoed a request that had encountered no signs of significant turbulence from state officials since the plan to secure the tax credits was made public more than a year ago.

Director of the Missouri department of economic development Rob Dixon, commissioner of the office of administration Sarah Steelman and revenue director Ken Zellers make up the group that shot down the St. Louis request for tax credits that would have been used for improving the public infrastructure surrounding the downtown stadium. This group got that chance because it has to sign off on any ask greater than $10 million. This group is heavily influenced by Parson.

The same “welfare for millionaires” line that Greitens used in 2016 will be echoed by some in Parson's camp now.

The soccer plan Greitens shredded was shut down not by the short-time governor, but by city voters who rejected a previous ownership group's plan, one that included an ask of $80 million from local taxpayers and $40 million from the state. It was from that derailed effort that the MLS4TheLou ownership group emerged, pairing the Taylor family of Enterprise Holdings with Jim Kavanaugh of World Wide Technology in an effort that has been praised both regionally and nationally for its primary reliance on private dollars, its narrowly tailored requests for city and state tax breaks, and its dedication to becoming a vibrant contributor to the Downtown West district beyond simply hosting soccer games.

St. Louis and the MLS4TheLou ownership group had no reason to believe the state would stiff-arm this plan.

In fact, it had evidence of support.

A lot of support.

“We’ll absolutely be a partner going forward. There’s no doubt in my mind,” Lieutenant Governor Mike Kehoe, who sits on the MDFB board, told the Post-Dispatch in August, after MLS awarded St. Louis an expansion team with plans to begin play in 2022.

Politicians' moves should be calculated carefully. This is especially true as an election season nears. Parson's play could mean more risk than reward.

He has put his lieutenant governor in an unfortunate spot. Kehoe is a St. Louis native who has been a vocal advocate for the MLS4TheLou group. Do you think Kehoe would have stuck out his neck like this if he knew a trapdoor would swing open? I don't.

Parson has alienated the Taylors and the Kavanaughs, meaning he has alienated Enterprise and World Wide Technology, significant Missouri-based companies. The ownership group declined to comment when asked how it will handle this setback. Should it swallow its disappointment and salvage what it can from the state, or call out Parson for his betrayal? (At least Greitens was clear about where he stood.) Meanwhile the ownership group must be wondering what other deals might shrivel up if others follow Parson's playbook.

Parson has pulled a rug out from beneath his state's most powerful economic region while creating questions he will have a hard time answering. Here’s one example: Why block this request from St. Louis when the state has, within the past 15 years, approved roughly $75 million in tax credits for professional sports ventures in Kansas City?

But most importantly, Parson has exposed a damaging flaw.

Let's stick to a sports analogy.

Missouri's governor is a teammate you can't count on.

They stuck to the script during an open house on ramp closures to Highway 40, which could come as soon as Feb. 3.

A view of the planned MLS stadium looking northwest from 20th and Market streets, according to renderings obtained by the Post-Dispatch. The facility is being designed by HOK of St. Louis and Minneapolis-based Julie Snow.

A view of the planned MLS stadium looking north at Market Street, according to renderings obtained by the Post-Dispatch. The southern edge of the stadium will be flexible space that can be used for events. The facility is being designed by HOK of St. Louis and Minneapolis-based Julie Snow.