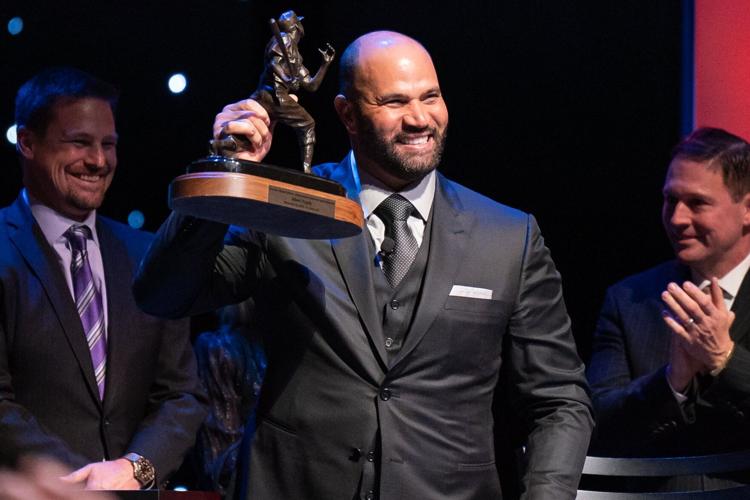 Albert Pujols, center, smiles as he accepts the 2022 Stan Musial Lifetime Achievement Award for Sportsmanship during the Musial Awards on Saturday, Nov. 19, 2022, inside the Stifel Theatre. 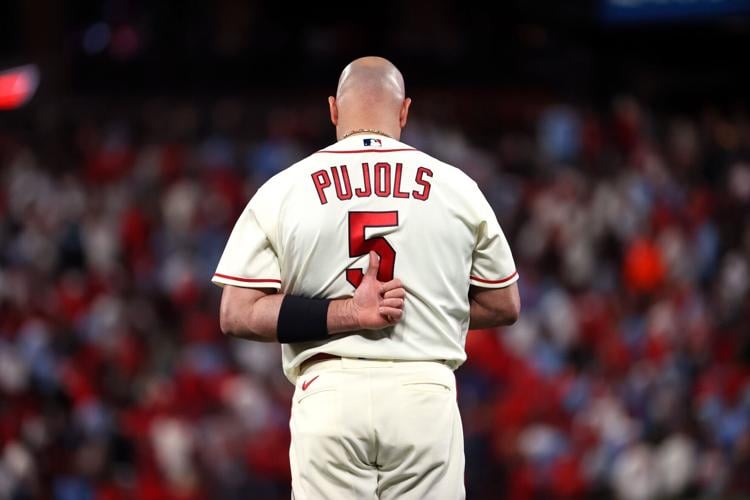 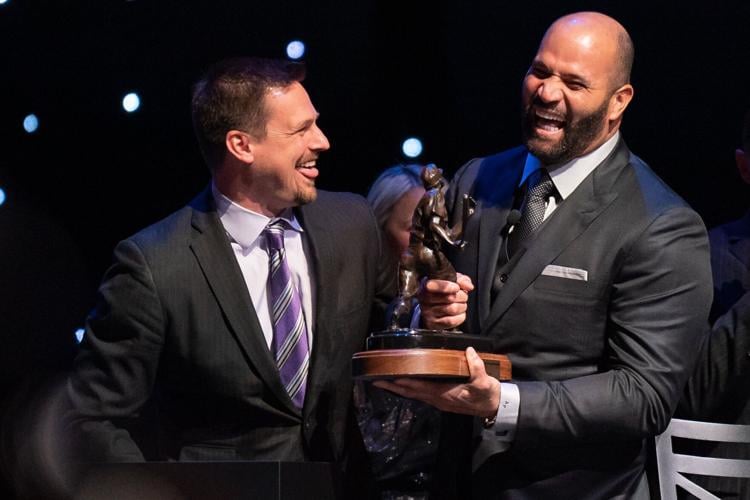 A still-growing list of awards and honors earned by Albert Pujols during his remarkable career has expanded again, and it’s safe to say this addition will forever be among the most special, judging by the tears he wiped from his eyes.

The retired Pujols received the eighth installment of the Stan Musial Lifetime Achievement Award for Sportsmanship at Saturday evening’s Musial Awards at Stifel Theatre, further linking the future Hall of Famer’s legacy to Hall of Famer and award namesake Musial.

“The perfect recipient,” Musial’s daughter, Jean Edmonds said before the show. “We love Albert. Like my daughter will say during her speech tonight, watching Albert when he was here was the closest I got to watching my dad, because I was four when he retired. They had a very special bond.”

The legacy of Musial, as best I can tell, is about achieving greatness while refusing to let the pursuit of it minimize goodness. It is a unique thing to be great while also being good, and too often we are led to believe that being good — good to our teammates, good to our opponents, good to ourselves, good to total strangers — can be some sort of hindrance to being great. That’s wrong, of course, and Pujols, like Musial, proved it so often on and off the field during his 22-season career, whether it was hitting home runs on Buddy Walk Day or his foundation’s work in the Dominican Republic and with children with Down syndrome.

So often during his final sendoff season in St. Louis, Pujols seemed to smile bigger than he did his first time here. He welcomed rookies beneath his wings. His joy for the game became contagious in the clubhouse, with National League MVP Paul Goldschmidt mentioning recently how he allowed himself to have more fun this season because of Pujols’ influence.

In some ways, it was similar to a years-ago moment Pujols described Saturday night, when Musial asked to see Pujols’ bat before a game during one of his memorable visits to the Cardinals clubhouse. Musial gave the bat a test swing, then with a big grin teased Pujols that the bat was as light as a toothpick.

“He would shine,” Pujols said. “He would walk into that clubhouse with a big smile. Forget about what he did on the field. What he did off the field, and the legacy he left behind, we still celebrate it today.”

Greatness and goodness can coexist, and Pujols had company on the stage Saturday that can be cited as other awesome examples.

Musial Award recipients included Little League baseball hitter Isaiah Jarvis, who made a moment of sportsmanship go viral when he left his spot on first base to go console a pitcher, Kaiden Shelton, who accidently hit him with one of his hardest pitches during a tournament. The two boys have become friends and have even played together on a travel team since.

Seattle NHL fan and pre-med student Nadia Popovici used her cellphone during a hockey game to alert Canucks assistant equipment manager Brian Hamilton about a concerning mole on the back of his neck. Hamilton got it checked out, and doctors later removed a malignant melanoma before later declaring him cancer free. The Canucks in return surprised Popovici with $10,000 to use for medical school tuition.

Olympic speed skater Brittany Bowe volunteered to give up her spot in an event at the Winter Olympics to a teammate who stumbled during a trial, and that teammate, Erin Jackson, went on to win gold in Beijing.

Mississippi high school powerlifters Syrianna Jones, Demeria Moore, Jorja Roberson, Cara Roberson and Jasmyn Stamper came together to help an opponent work around a bad rule that has since been changed. When Diamond Campbell was threatened to be disqualified from a high school powerlifting championship because she had beads in her hair, the young women helped Campbell remove the beads in time for her to repeat a lift that had not been countered. The reaction to the story prompted the Mississippi High School Activities Association to change the rule. The group of young women accepted the award together, presented by Campbell. Then, they all flexed.

NFL running back Warrick Dunn received the Musial Award for Extraordinary Character. The oldest of six children, Dunn lost his mother at the age of 18. He managed to provide a home for his siblings, and he did not stop there. The three-time Pro Bowler’s Homes for the Holidays program has helped provide furnishing for more than 200 homes and approximately $1 million in down payments while serving more than 450 single parents and children.

Brett Phillips and Chloe Grimes struck up an unlikely but powerful friendship between a major league baseball player and a young girl battling cancer, one that included Phillips crushing a home run while Grimes was being interviewed about Phillips.

And then the stage belonged to Pujols, who had spent his night hugging and high-fiving the evening’s other honorees on their way to the spotlight. Members of the Musial family greeted him on the stage. Hugs and tears were shared.

“First of all, I’m really honored and humbled,” Pujols said. “Since 2001 when I stepped on that field for my rookie season, the Musial family accepted me as one of their own.”

Albert Pujols, released in 2021 and homering his way to 700 in 2022, becomes the third Cardinal to win the NL Comeback Player award.

Albert Pujols, center, smiles as he accepts the 2022 Stan Musial Lifetime Achievement Award for Sportsmanship during the Musial Awards on Saturday, Nov. 19, 2022, inside the Stifel Theatre.