BenFred's 5: Key for Molina's extension is Cardinals and catcher remembering they're better off together
0 comments
Share this
Subscribe for $3 for 3 months
1 of 2 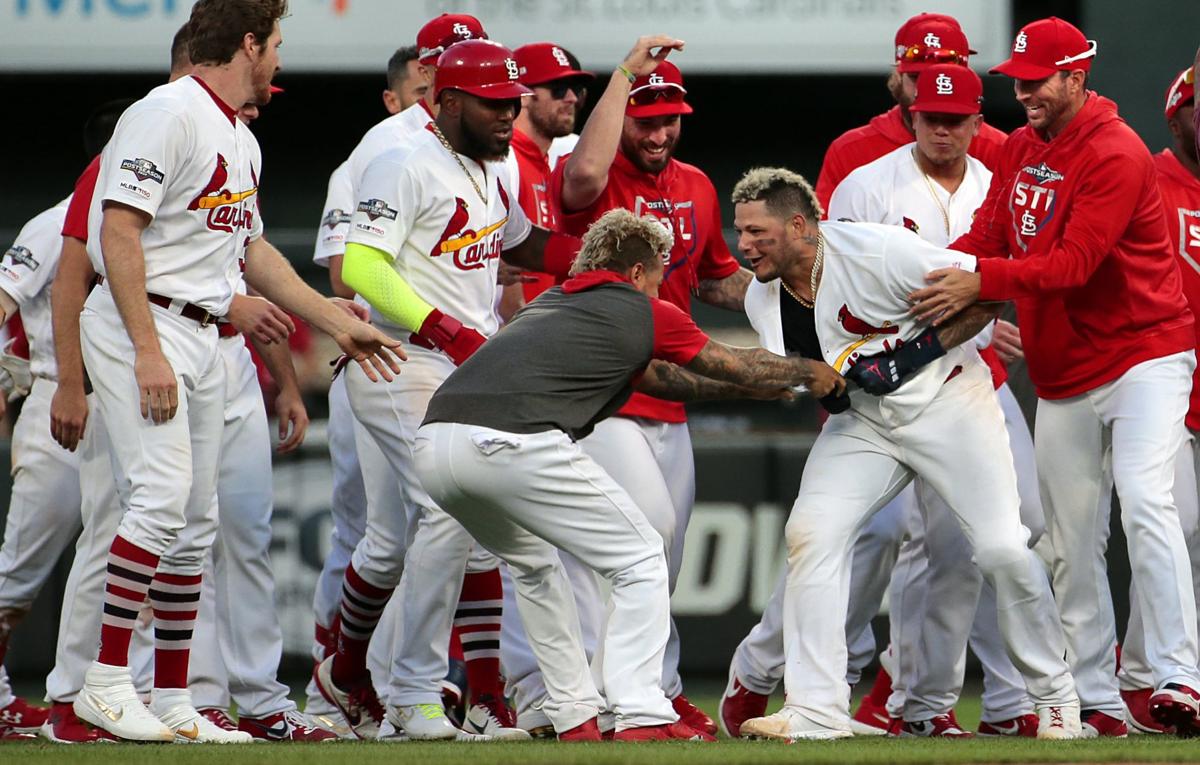 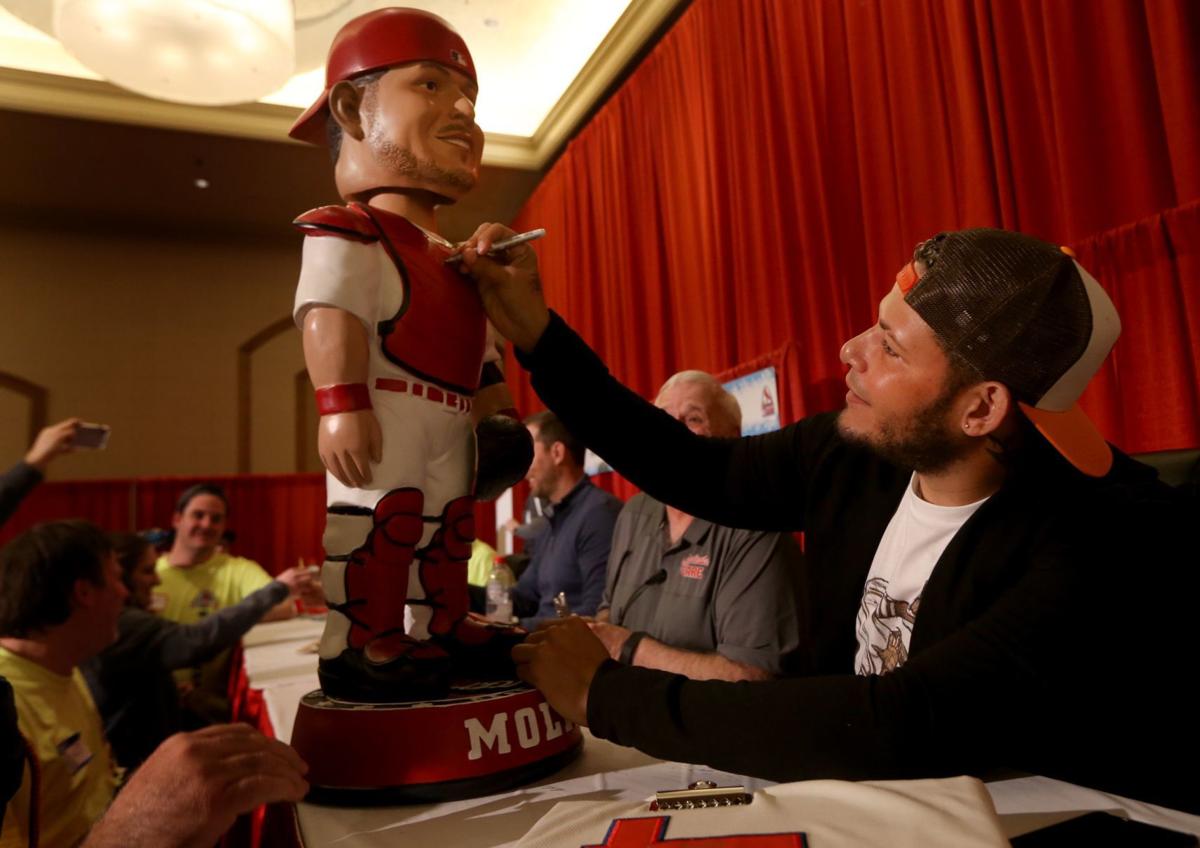 Catcher Yadier Molina autographs a giant bobblehead of himself at the Cardinals' 2020 Winter Warm-up in January. Photo by Laurie Skrivan, lskrivan@post-dispatch.com

Five catcher-related topics from columnist Ben Frederickson that Cardinals fans should be discussing . . .

1. Molina back in the driver's seat

This is more like Yadier Molina. It seemed a little off at this year’s Winter Warm-Up when the future Hall of Fame catcher surrendered his leverage by saying he would retire if the Cardinals were not interested in extending him after his current contract expired following the 2020 season. Cardinals-or-nothing was a warm, fuzzy thought for the two-time World Series champion, nine-time All-Star and nine-time Gold Glove winner to float at the time, but it would have meant he was in the passenger seat to how his career came to an end.

Question for the audience: How many times have we watched Molina willingly slide into the passenger seat for anything? The 37-year-old has been pretty forthcoming throughout recent seasons about wrestling with his shifting thoughts on retirement. He goes back and forth. Who doesn’t? One thing the coronavirus pandemic has provided is plenty of time to think, and Molina’s latest thought is that he wants to be the one, not the Cardinals front office, who decides when it’s time to walk away. That’s more like Molina.

Baseball’s stoppage due to the coronavirus pandemic tossed a wrench in what should have been relatively smooth negotiations between the Cardinals and Molina’s camp when it comes to figuring out the details of a short extension that would carry Molina through the end of his career, like the last extension planned to before Molina outlasted it.

If Molina’s comments to ESPN were out of frustration that something has not been figured out yet, he has to understand that the business of baseball is on lockdown. It’s not like there are extensions flying off the shelves around the league. Right now the discussions have more to do with ticket reimbursements, layoffs and furloughs. It’s a delicate time to be lighting a fire beneath extension talks, and there’s a reason Molina picked his words carefully and made clear to stress that he hopes the end result of this is that he remains with the Cardinals.

It’s not very hard to imagine this Molina extension being the first order of business taken care of once the business of baseball resumes, but Molina is going to have to understand the business of baseball is going to be slow to launch, and that it might look a little different when it does. As in, it’s not exactly the time for a 37-year-old catcher — even one as beloved as Molina — to make unrealistic demands.

3. Legacy matters to the Cardinals

I’ve argued before that the Cardinals don’t need to rush into an extension with Molina, and that they should consider shifting gears and going year-to-year with the catcher, similar to the team’s approach with starter Adam Wainwright.

In order to do that, you have to have a player who is willing. Molina sounded willing at Winter Warm-Up. Now he sounds like he would like some more security in St. Louis, and like he’s willing to entertain other offers if that security doesn’t come.

The Cardinals have a long history of rewarding longtime Cardinals who have been loyal to the organization, and what current Cardinal has done more than Molina? The answer is none, and it means a lot to the organization that the catcher is on the path toward the Hall of Fame with all of his seasons spent as a Cardinal, just like Stan Musial and Bob Gibson. The Cardinals extended Matt Carpenter because they wanted him to finish his career in a Cardinals uniform.

Does anyone really expect them to let Molina walk? They won't  — as long as sanity and reason remain at the heart of the conversation. This is not an Albert Pujols situation. Molina is 37 years old with a long list of injury red flags. Based on adjusted on-base plus slugging percentage, he’s been a below-average hitter since 2015.

My point is, there’s not a team out there that values Molina like the Cardinals do, because the Cardinals know all of the things Molina does that can’t be traced back to his stats. The Cardinals thrive on pitching and run prevention, and there is not one player who is more critical to those efforts game in and game out than Molina. He’s a defensive coordinator, a pitching coach, a hitting coach, a psychologist, an enforcer, and that’s just the top of the list.

Don’t forget fan favorite. The public backlash of losing Molina would be severe, and it should be, as long as Molina does not make ridiculous demands. The Cardinals need Molina more than any other team needs him, and no other team would appreciate him like the Cardinals do. Both parties should keep that in mind when it comes to negotiations. If they do, this will be no sweat.

The only thing worth really fearing here is that some slight, real or perceived, could become a sticking point. We have witnessed many times over the years what respect means to Molina, and how he responds to what he perceives as a lack of it. Cubs star Kris Bryant found out. So did former Cardinals manager Mike Matheny. If Molina begins to feel like the Cardinals are slow-playing him or shortchanging him, this could become a much more difficult discussion.

The most obvious potential snags include, of course, the money. Molina’s expiring contract pays him $20 million per season. He would accept less on an extension, right? He told ESPN he’s pursuing a deal with the Cardinals that would carry him through the 2022 season. Would he take an incentive-laden contract based on innings caught per season? Would he accept a one-year deal with a mutual option for another? And here’s the big question: Will he ask more from the Cardinals than he would accept from a new team?

And then there is the conversation of how a Molina extension affects plans for up-and-coming catcher Andrew Knizner. The Cardinals already used a promising Molina backup, Carson Kelly, to sweeten a trade package for Paul Goldschmidt. Would they do it again? It could depend on the organization’s outlook for up-and-coming prospect Ivan Herrera. The Cardinals have had no problem loading the decks behind Molina. Kelly, then Knizner, then Herrera. They only have one Molina. They know it. He knows it. Another reason to make a mutually beneficial deal.

5. One team to worry about?

There’s only one team I would worry about if you are a Cardinals fan dreading the idea of Molina playing for another team in 2021. He would not leave the Cardinals to go just anywhere. But one team, the Angels, has Molina’s baseball brother, Albert Pujols, under contract through 2021, and Molina’s former manager, Tony La Russa, advising the front office. It also has Joe Maddon on the bench, publicly campaigning for a veteran catcher. Let's hope we never see it.

BenFred: Baseball fans must hope players push back against extended use of expanded postseason

But Manfred says: 'It’s one of those changes that I hope become a permanent part of our landscape.'

Jack Fox is one of the Detroit Lions' few bright spots so far this season.

BenFred: If Martinez has a future with the Cardinals, it must be in the bullpen

Two thousand hits is a big deal for a catcher, especially one known for defensive excellence

St. Louis native and former Cardinal is the best bet to win this season's home-run race.

BenFred: Four (as in runs) is a serious number for the Cardinals

Simple math: They win when they reach that number and lose when they don't this season.

BenFred: One big win would work wonders for Drinkwitz's debut season at Mizzou

But Tigers realistically can't expect many victories in a season in which there are many obstacles.

Both came out of Omaha to be among all-time best in sports.

Health department cites at least five recent cases of COVID transmission in the last month traced to high school athletes in the county.

Starting at 1 p.m., see what BenFred has to say about the region's teams in his live chat with St. Louis sports fans.

Catcher Yadier Molina autographs a giant bobblehead of himself at the Cardinals' 2020 Winter Warm-up in January. Photo by Laurie Skrivan, lskrivan@post-dispatch.com