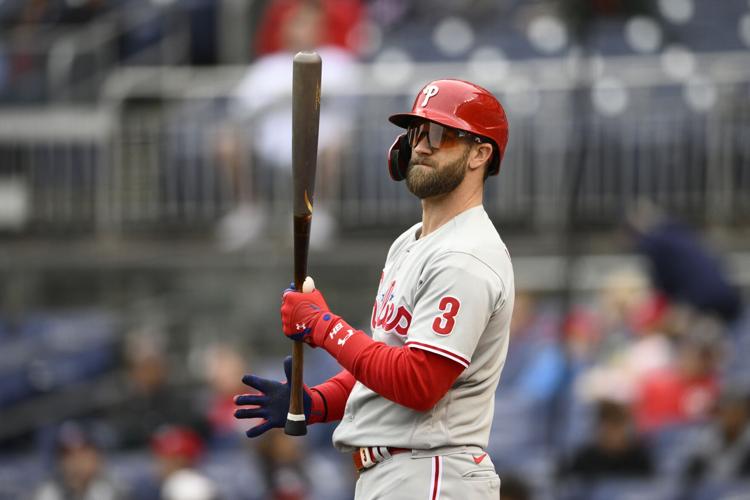 Philadelphia Phillies' Bryce Harper warms up on deck during the third inning of the first baseball game of a doubleheader against the Washington Nationals, Saturday, Oct. 1, 2022, in Washington. 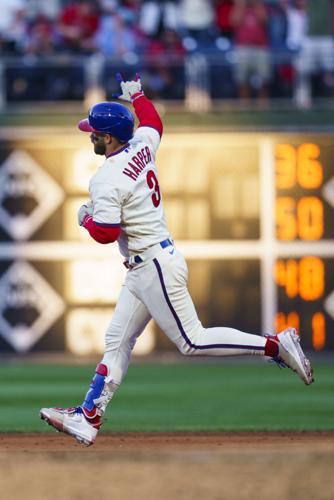 Phillies outfielder Bryce Harper reacts to his home run during a game against the Braves on Saturday, Sept. 24, 2022, in Philadelphia. 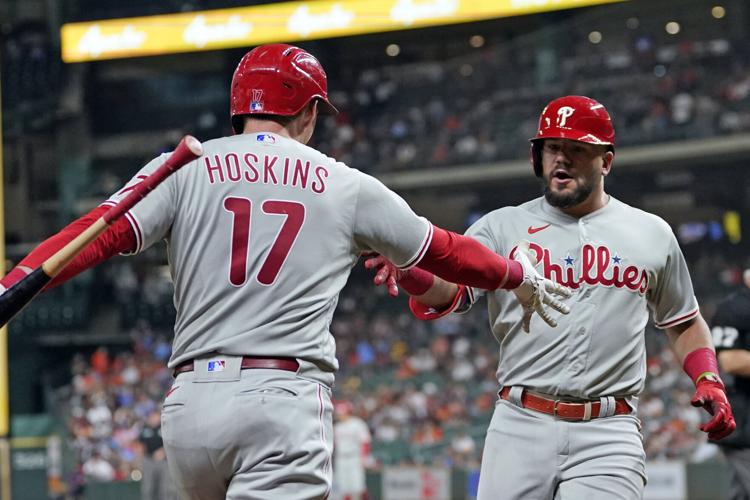 The Phillies' Kyle Schwarber, right, celebrates with Rhys Hoskins after hitting a home run against the Astros during the first inning of a game on Monday, Oct. 3, 2022, in Houston.

The last time Bryce Harper faced the Cardinals in the playoffs, he couldn’t legally drink Champagne.

It was October of 2012, a decade ago, when the Cardinals knocked off the Nationals. Since then, the phenom became a phoenix and, now, a Philly. And until the Cardinals’ Paul Goldschmidt gets the hardware this winter, Harper is the reigning MVP in the National League.

Still, since returning from the injured list on Aug. 26, Harper has a .676 OPS and only three homers (incidentally, Goldschmidt has gone from slugging to struggling, too — he has only two homers since the same Aug. 26 date).

Which leads us to the Cardinals’ test beginning Friday in the three-game series against Philadelphia. While the Phillies don’t have a lot of lefties in the lineup, they have two in their top-three spots — leadoff hitter Kyle Schwarber and then Harper hitting third.

If the Cardinals can handcuff these two, it’s safe to say the Cards will hand the Phillies two losses.

For St. Louis, both righty starter Miles Mikolas and southpaw starter Jose Quintana have fared well against lefty hitters this season. Encouraging, sure. But which Cardinals reliever or relievers could — and should — face Schwarber and Harper?

It’s a daunting task and ask.

Now, for some Cardinals fans, the mere mention of Schwarber causes shivers.

The year was 2015. The Cardinals won 100 games. The plucky upstarts from the North Side were St. Louis’ opponent in the National League Division Series. And the hefty lefty Schwarber went 5 for 10 with two homers, including a Rawlings launch off of southpaw Kevin Siegrist. The homer landed on top of the right-field video board at Wrigley Field.

It gave Chicago a 6-4, seventh-inning lead in the fourth and clinching game.

Now in 2022, Schwarber will likely be the first hitter against the Cardinals in the NL Wild Card Series. The anti-Vince Coleman, Schwarber leads off for the Phillies but has stolen just 10 bases. He’s up first because they want him up as often as possible. Schwarber shellacked 46 pitches for home runs this season, the most homers hit in the NL, while going deep in every 12.5 at-bats (also best in the NL). He is 2 for 6 this season against Mikolas; he hasn’t yet faced Quintana.

He reached the dubious 200-strikeout mark in Wednesday’s final game.

And another favorable stat for St. Louis is that in innings 7-9, Schwarber’s OPS is just .755. Of course, some of that is because of the matchup madness that dominates baseball. But none of that matters if the Cardinals can’t create the optimal matchup to unplug Schwarber’s power.

Credit Oliver Marmol, the Cards’ first-year manager, for pressing the right buttons often in the late innings this season.

But the top of the Phillies’ lineup presents a frightening challenge, especially in a small sample size.

For instance, Philadelphia wedges a righty between Schwarber and Harper. That’s Rhys Hoskins. So if you bring in a pitcher to face the two lefties, the pitcher will have to get through Hoskins, too. The 6-foot-4 Hoskins hit 30 homers with an OPS in the .790s. His official nickname on MLB.com is “The Big Fella.”

Thus, with the lead late, who should the Cardinals have face this trio?

Really, the answer should be closer Ryan Helsley (1.25 ERA), even if it’s not the ninth inning. The right-hander Helsley has neutralized lefties with his 1.00 ERA in 100 plate appearances. Marmol will occasionally deploy Helsley in a different inning, depending on the lineup. If Schwarber was to lead off the eighth, ringing the bullpen phone and playing “Hells Bells” should be the move.

One guy who should avoid the top of the Phillies’ lineup is, actually, a guy who often pitches late in games. That’s Giovanny Gallegos. The righty has a 4.56 ERA against lefties.

Earlier in the game, after the starter is pulled, perhaps the play against Schwarber and Harper is the southpaw Steven Matz. The former starter has a good arsenal in a one-off situation. And interestingly, rookie Zack Thompson has a 0.00 ERA against left-handed hitting this season. But if you’re choosing between the two lefties, you likely go with the veteran Matz.

And the fun of the three-game series — but the frustration for managers — is the fact that two starters could be used out of the bullpen. And Jordan Montgomery is a talented lefty and Jack Flaherty has great swing-and-miss stuff.

Rookie Liberatore gives Cardinals the innings they wanted but misplaces a three-run lead before losing, 5-3, to Pirates in regular season fina…

Philadelphia Phillies' Bryce Harper warms up on deck during the third inning of the first baseball game of a doubleheader against the Washington Nationals, Saturday, Oct. 1, 2022, in Washington.

Phillies outfielder Bryce Harper reacts to his home run during a game against the Braves on Saturday, Sept. 24, 2022, in Philadelphia.

The Phillies' Kyle Schwarber, right, celebrates with Rhys Hoskins after hitting a home run against the Astros during the first inning of a game on Monday, Oct. 3, 2022, in Houston.