Hochman: A Ram in G.O.A.T.'s clothing — what Isaac Bruce's gold jacket means to the Hall of Famer
0 comments
Share this
{{featured_button_text}}
1 of 2 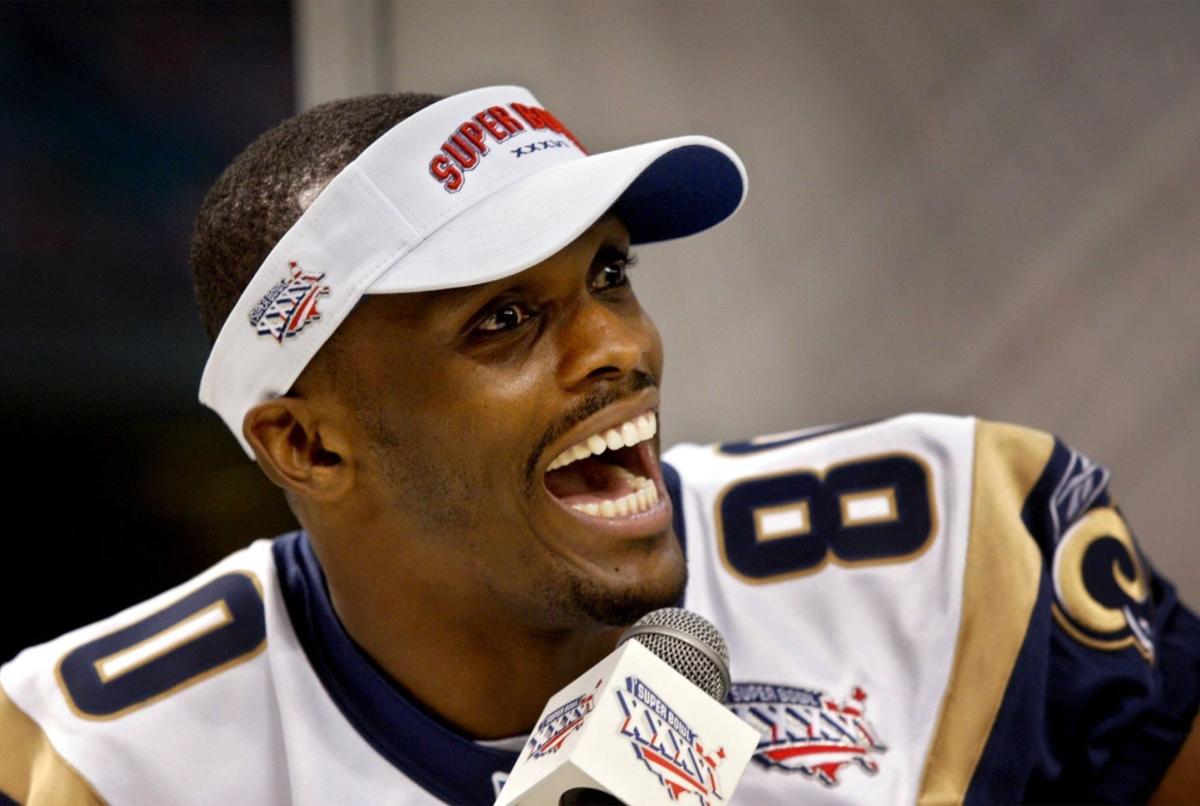 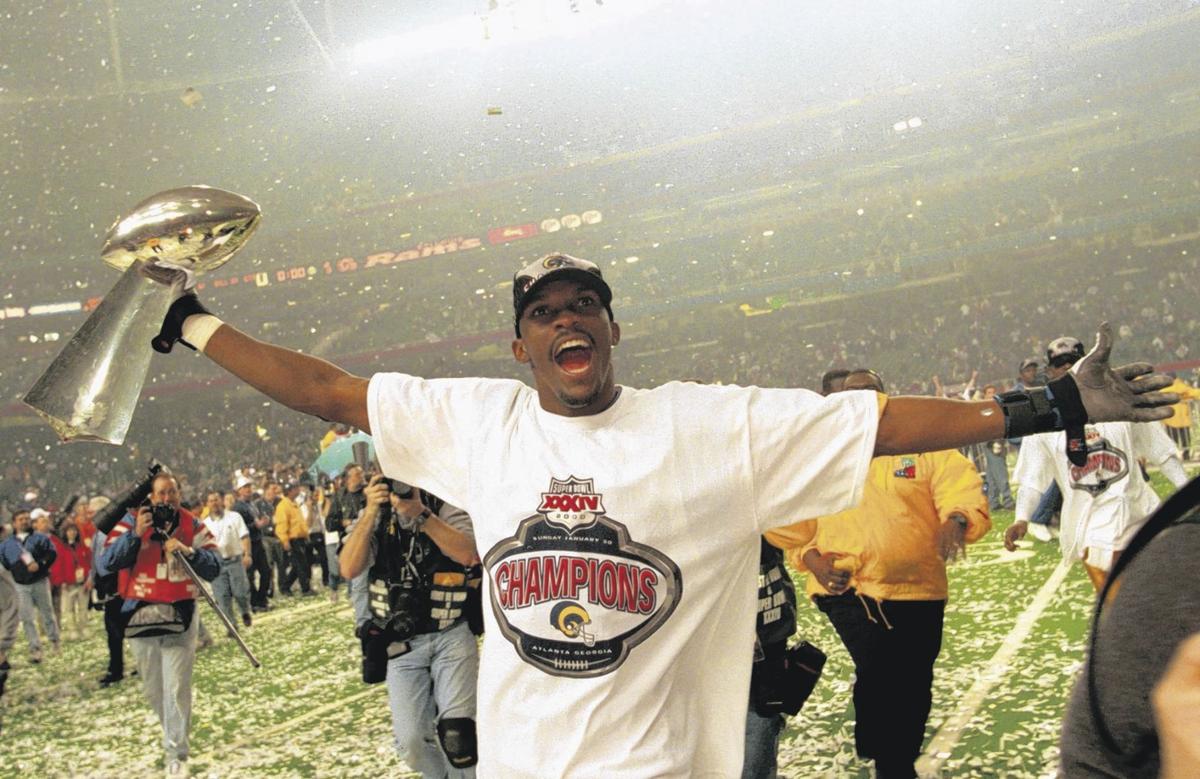 Isaac Bruce ha gone from Super Bowl champion for the 1999 season to Pro Football Hall of Fame inductee this weekend.

His first jacket was because of Sundays, too.

“A sport coat to go to church in,” Isaac Bruce said. “My parents bought it for me. I really have to drum up that memory. It was Mission Revival — that’s in Fort Lauderdale, Fla. It was putting on the jacket, and then after that, it was trying to get home and see what Dan Marino and the crew were going to do.”

Now, Bruce is about to have a new jacket. It’s gold. Dan Marino has the same one.

This Saturday, the legendary St. Louis Rams receiver will be enshrined in the Pro Football Hall of Fame. The night before, he’ll receive his attire — his gold jacket, which is created specially and specifically for the members of the Hall of Fame.

“It’s one of the iconic sports pieces,” Bruce said. “To be able to have one in my possession? It’s pretty sweet, man.”

From 1995 to 2007, Bruce starred for St. Louis, wearing No. 80 in blue and gold, but now he’s No. 328 in just gold — that’s his enshrinement number, which is handstitched on the inside of his gold jacket. It takes the Haggar Clothing Co. four months to create a gold jacket, which is made of hopsack wool with the Hall of Fame crest on over the heart.

And while the jacket is simply a passenger on the receiver’s route to the Hall of Fame, because of its history and intricacies, the jacket itself is a work of art, also worthy of a museum. OK, this isn’t to say it’s a Monet. But for us in the sports world, items such as a gold jacket or green jacket, the Stanley Cup or Wanamaker Trophy, or even a Donruss Diamond King or wood-framed Topps — now, this is our art.

Among the details about the official gold jacket is that it isn’t officially gold. Or any color.

“It is a proprietary color that was created — it’s not registered with any color service, so it cannot be duplicated,” said Mindy Davis, the director of consumer marketing for Haggar. “So it’s very prestigious for these guys that they have on something that cannot be replicated.”

Beginning in 2012, a slight red tint was added to the jackets to make them stand out sharper on HD televisions.

The buttons on the single-breasted jacket are custom-made — they feature the insignia of the Pro Football Hall of Fame in Canton, Ohio. The interior lining of the jacket has an understated pattern of the Hall’s logo, along with the interwoven label stating the inductee’s name, class year and induction number. There are now 354 members of the Hall, but fewer than 354 gold jackets — jackets aren’t created for posthumous members, and instead their families receive a memory box lined with the Haggar gold fabric and the chest patch.

Bruce originally was fitted for his jacket on what’s called “Measurement Monday,” the day following the Super Bowl on which new members are sized for their gold jacket, bronze bust and enshrinement ring. Incidentally, Isaac is a 42 regular.

“Being fitted for it was everything I imagined,” Bruce said.

The jacket was shipped to Bruce’s home for some impromptu pomp and circumstance. The ceremonial ripping of the cellophane was captured by cell phone — Bruce tore into that thing like it was the Titans’ secondary, and there it was, his gold jacket, in his possession. He wasn’t, however, allowed to wear it in any photos besides the initial video (though Bruce mused to columnist colleague Ben Frederickson that he once wore the gold jacket while mowing the lawn).

Bruce and his fellow inductees had to then ship the gold jackets to the Hall of Fame, where “they’re under lock and key,” said Rachel Gutting, the Hall’s director of communications and strategic initiative. “The enshrining gold jacket ceremony takes place Friday evening. It’s different in two ways this year. It’s a ceremony instead of a dinner, because of combining both classes (from 2020 and 2021, because of the coronavirus pandemic). We had to change the format of the show and the layout in order to get more people into the building — we wanted to make sure we got in as many friends and family of those being enshrined, and there are 19 getting their gold jacket. It’s set up more like NFL Honors-style.

“Then, this is one of the coolest parts of the weekend: all the Hall of Famers who come back for the weekend — there are more than 100 that are returning — form a gauntlet. So as Isaac is introduced, he is going to walk this gauntlet and be welcomed by all those who have made it here before he has. It’s the old welcoming in the new — their new brothers into the fraternity.”

That evening, a volunteer named Maureen Schmucker is responsible for the 19 jackets. Along with some helpers, she is available for any inductee who wants his jacket cleaned and preserved after Friday’s festivities. She will take the gold jackets to Carriage Hill Cleaners on Whipple Avenue.

“They take great pride,” Gutting said. “They’re staying open late and dry-cleaning these to make sure they are fresh for all of the events over the weekend.”

Isaac Bruce is headed to the Hall of Fame this weekend. How cool is that? And just like after church in his first jacket, after Saturday’s ceremony in the gold jacket, Bruce might see what Dan Marino and the crew are going to do.

Isaac Bruce ha gone from Super Bowl champion for the 1999 season to Pro Football Hall of Fame inductee this weekend.