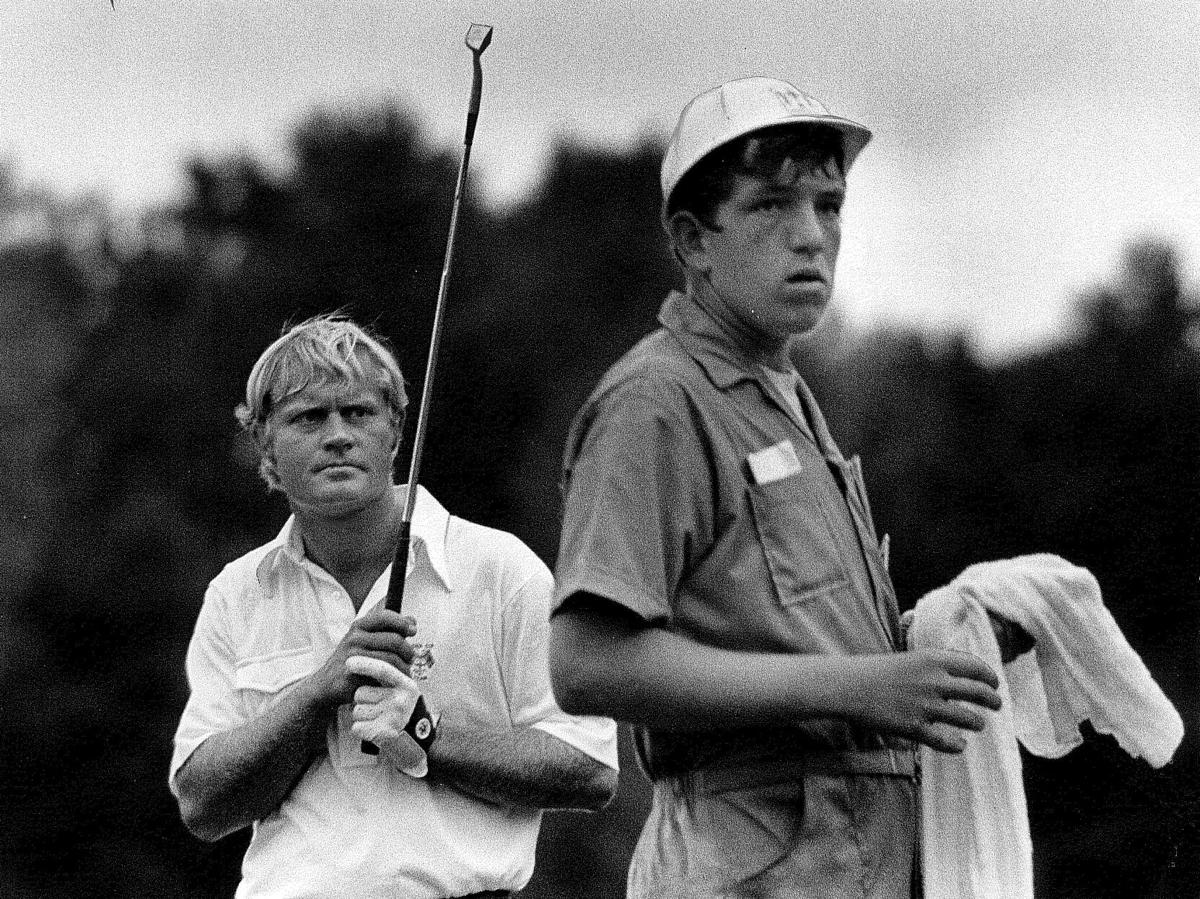 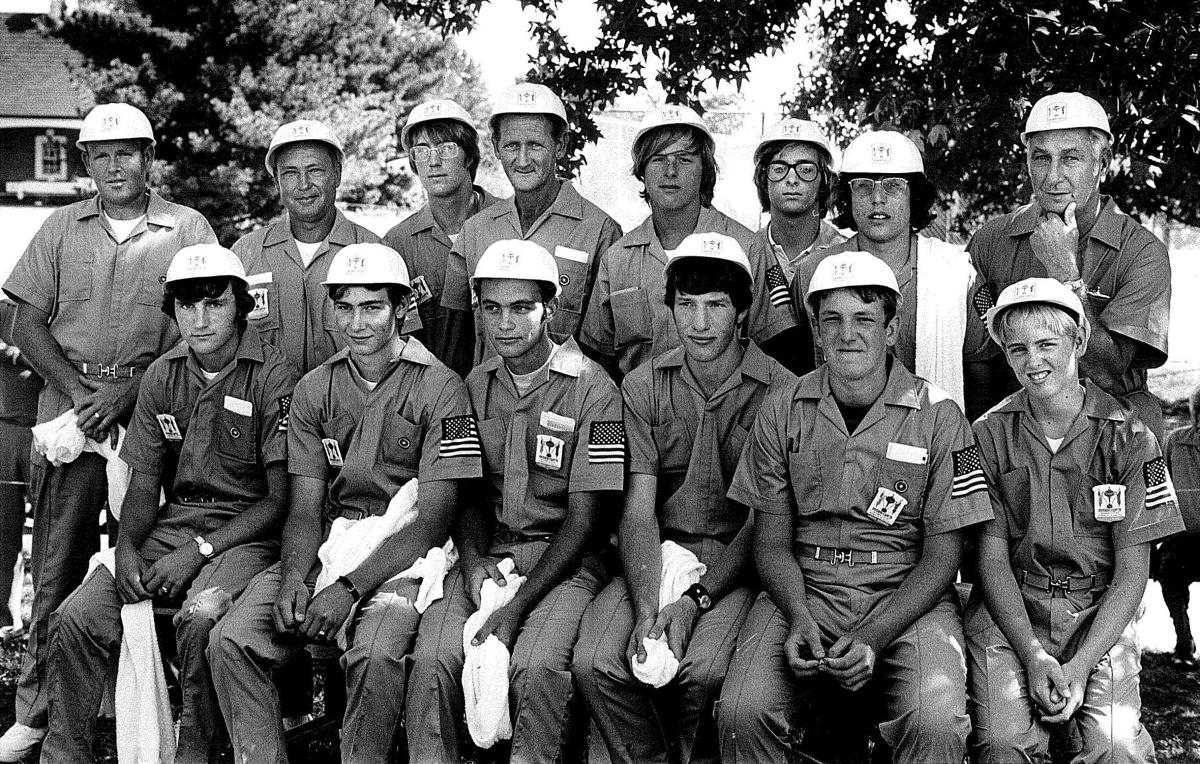 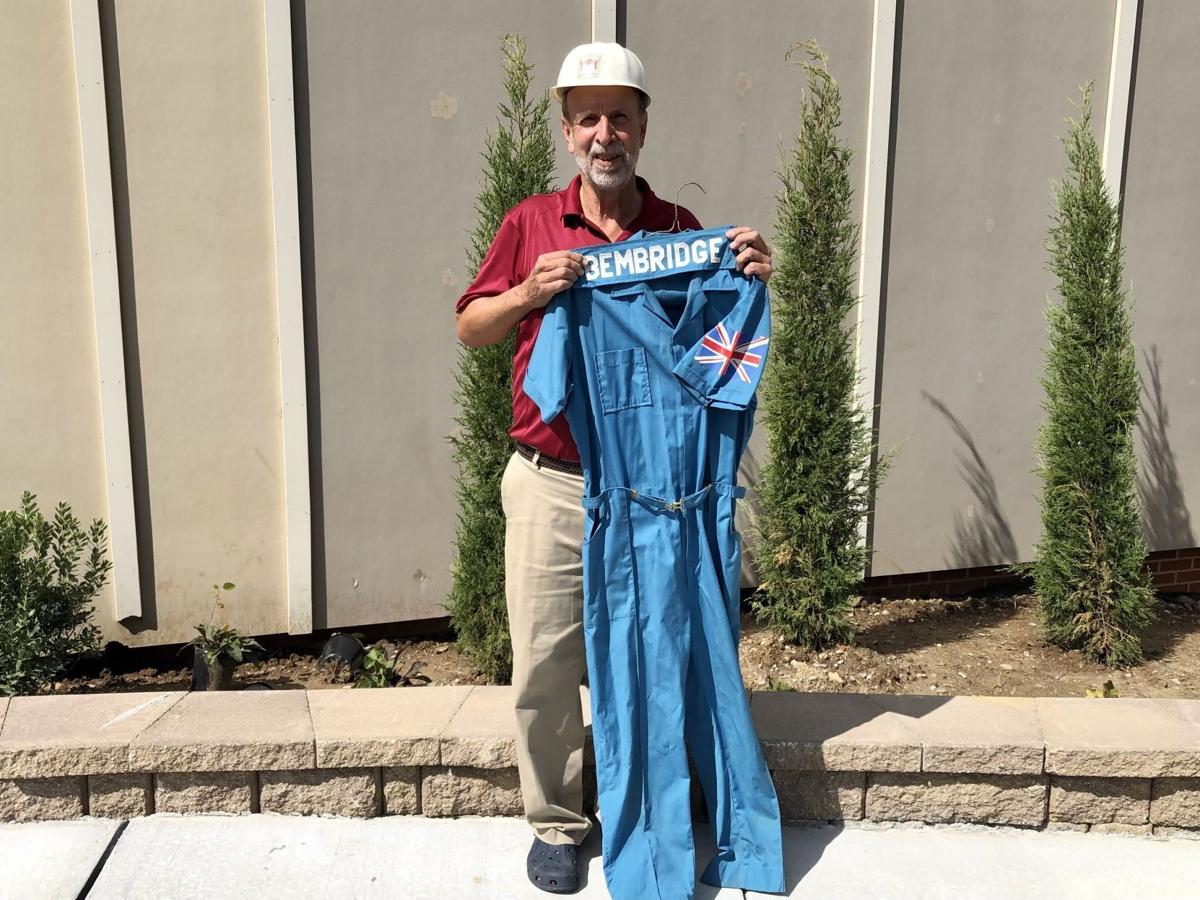 A caddy at the 1971 Ryder Cup in St. Louis, 68-year-old Mike Sawicki still has the hat and uniform he wore while caddying for Maurice Bembridge. Photo courtesy of Mike Sawicki 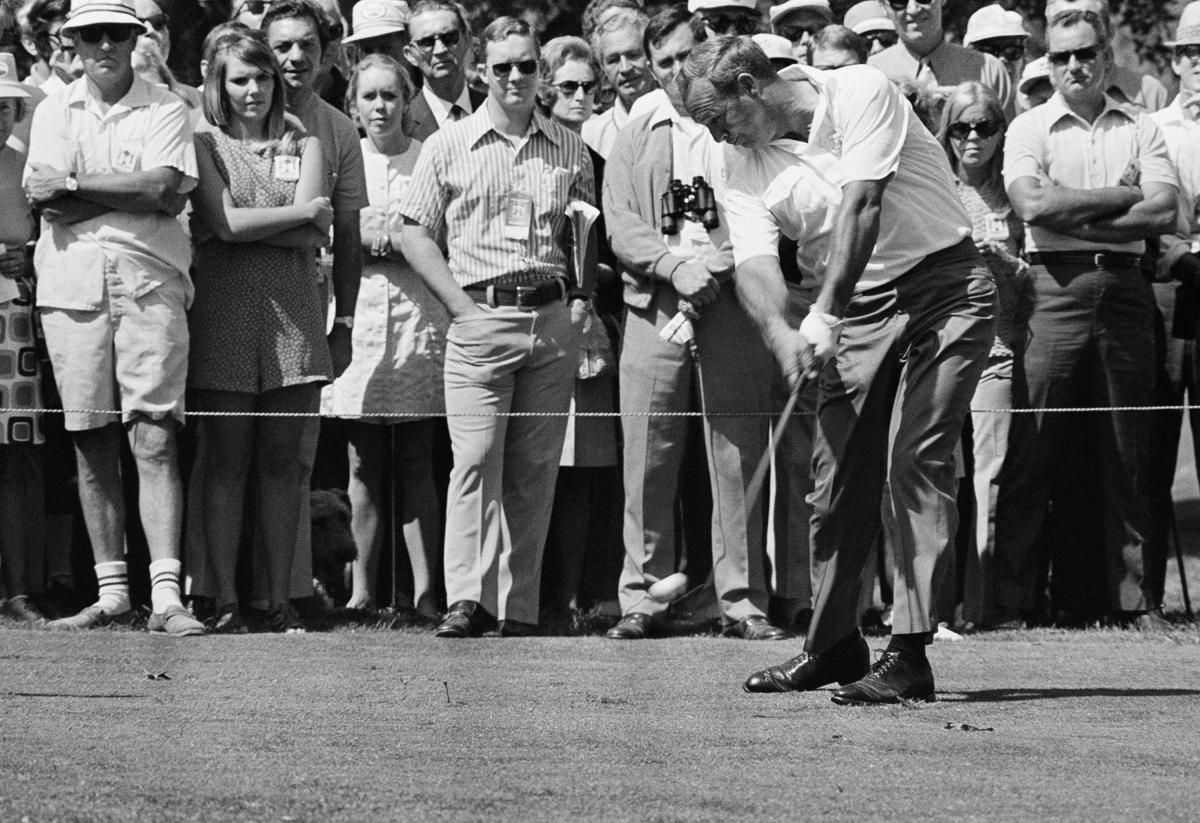 The golf ball and Arnold Palmer's driver are just a blur as he tees off during a practice session on the third hole at Old Warson Country Club in St. Louis County, Mo., Sept. 15, 1971. Palmer is a member of the U.S. Ryder Cup team which will meet the British team in matches starting on Thursday. (AP Photo/JCI)

When he called Wednesday afternoon, he was driving at the driving range. But for Mike Smith, this doesn’t mean he’s hitting golf balls; he’s picking them up. He was driving the Cushman ball picker at Old Warson Country Club. He’s a caddy. A looper. A lifer. He began working there in 1968, a year after the Beatles released “When I’m 64.” Now he’s 64, still doing the same job. He’s the caddy master, so he runs the show, but he’s out there himself. This was his seventh consecutive day. Boss won’t seem to give him a break.

“And you know,” Smith said, “there isn’t a day that goes by that a member doesn’t say, ‘Hey, tell my guest about the Ryder Cup.’”

Fifty years ago this month, Old Warson hosted the 1971 Ryder Cup. This weekend, the time-honored competition pitting Americans against Europeans will be at Whistling Straits Golf Course in Wisconsin. But a half century ago, it was here, and Smith said it was the final time participants had to use local caddies. So, a group of St. Louis teenagers caddied the Ryder Cup. It’s mind-boggling to think. And the tales of the links link these men to this day, who are in their 60s and scattered across the state and the country (Tim Healey, for instance, is a math professor at Cornell).

“These were the golfing gods,” Wally Pfeffer recalled Wednesday. “The guys you read about all the time and talked about in the caddyshack.”

And it’s fitting that Smith remains the one at Old Warson, because his story might be the best of them all. He was Jack Nicklaus’ caddy. And Smith was only 14 at the time.

“It’s unbelievable — some days I just can’t believe it myself,” said Smith, who has a new hip and a rebuilt ankle, fused together with screws. “I remember I went to the locker room to meet him. He was the only one in there. He was putting on his golf shoes. And I remember thinking: Wow, there he is — ‘The Golden Bear.’ (Lee) Trevino was here, (Arnold) Palmer was here, but everyone came to see Nicklaus.”

Smith was only 14, but he navigated the gig with grace. Smith remembers Nicklaus asked him to wear his watch during rounds — and hold onto his money clip, too.

“It had hundreds of dollars,” Smith said. “But my best memories are just how darn far he hit the ball.”

For that Ryder Cup, the boys carrying the clubs represented numerous country clubs around St. Louis. In the weeks leading up to the event, they would meet at Old Warson.

“We were there to get familiar with the course and listen to some instructions,” recalled Healey, 67. “And they threatened us with Billy Casper. They said you really need to pay attention, because I guess at the last one that was in the United States, he had gone through 4-5 caddies. So it’s like the fear of God because of Billy Casper.”

The caddy-golfer pairings were chosen from an old shoebox. They’d draw names.

“They called his name and there was a hush in the crowd,” Healey recalled. “And then they called my name. Everyone that I knew started howling like hyenas!”

Healey survived the human golfing gauntlet that was Billy Casper, though one minor mess-up led to Casper barking: “Jeepers creepers, son!” Trevino came up to Healey and whispered: “Don’t worry about it. He’s not having a very good tournament.”

Trevino was the life of the party. Caddy Dennis Hogan said the great golfer would be gabbing until the top of his backswing — “and he would start talking the moment the clubface hit the ball. He worked the crowd.”

The U.S. won that Ryder Cup, but the memories are the gems of little moments the caddies cherish to this day. Hogan remembered Palmer putting his arm around him and chatting. Imagine that — one day you’re caddying for local St. Louis golfers, the next day, you’re with Arnie.

Mike Sawicki was in his first year at Washington University, so he missed his first week of class — “but I knew this was more important.” Sawicki caddied for the English golfer Maurice Bembridge — and to this day, Sawicki has the caddy uniform he wore with BEMBRIDGE on the back. Also, he has the white plastic hat the caddies wore. Smith’s is signed by Nicklaus and on display at Old Warson.

Pfeffer got Nicklaus to sign a program. One of the great autograph “gets” of that time. But … Pfeffer gave it to the father of his girlfriend at the time.

“I always wanted to make sure the parents liked me,” he said.

He didn’t end up with the girl … and never got the signed program back, either.

Healey held on to his “snap” credential that has Casper’s name, if only for “proof that I really did it.” Healey also holds on to a story that he’s shared over the years. During a practice round, Nicklaus yelled over to him for Healey’s suggestion on a shot. Nicklaus used the suggested club and indeed hit the green, but hit it so hard, the ball “kazoomed past the green, because it was way too much club. …

“And he comes running over at me with his club, like he’s all ticked off at me. It was just a big show. It was fantastic. My thrill of the entire experience.”

It’s been a half-century. Everything’s changed. Back then, they didn’t even have yardage books, the old caddies recalled. But one thing has remained the same: The boy on Nicklaus’ bag is still working at Old Warson, telling the same special stories from 50 Septembers ago.

Watch now: 'I do want balance throughout the lineup' says Blues coach

It was simultaneously normalcy and nostalgia, taking us back to a world we once knew, and are now, slowly but surely, living again.

Hochman: On the 10th anniversary of the David Freese homer, Gerald Laird’s celebration remains a symbol of St. Louis’ jubilation

"You just turn into little kids," Kyle McClellan said of the Game 6 walk-off. "I think that epitomizes (Laird's) personality."

Hochman: New Cardinals manager Marmol says ‘a championship is the goal.’ The pressure is immediately on

“Expectations for this organization has always been the same — to win a World Series,” said Marmol, 35.

Hochman: Two St. Louis kids became the Detroit Lions' punter and kicker ... and this Sunday, they play the Rams

Hochman: Luther Burden’s decision to play football for Mizzou is the Tigers’ biggest win of the season

Luther Burden is a five-star receiver only because they don’t give out six.

Could you imagine Shildt in the Big Apple? How about San Diego?

A caddy at the 1971 Ryder Cup in St. Louis, 68-year-old Mike Sawicki still has the hat and uniform he wore while caddying for Maurice Bembridge. Photo courtesy of Mike Sawicki

The golf ball and Arnold Palmer's driver are just a blur as he tees off during a practice session on the third hole at Old Warson Country Club in St. Louis County, Mo., Sept. 15, 1971. Palmer is a member of the U.S. Ryder Cup team which will meet the British team in matches starting on Thursday. (AP Photo/JCI)