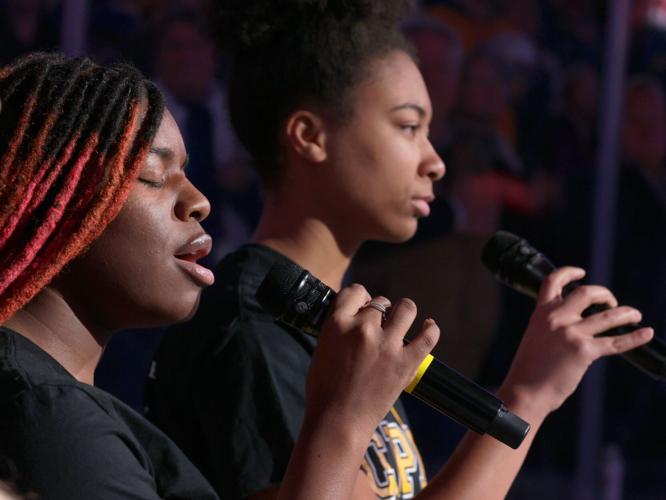 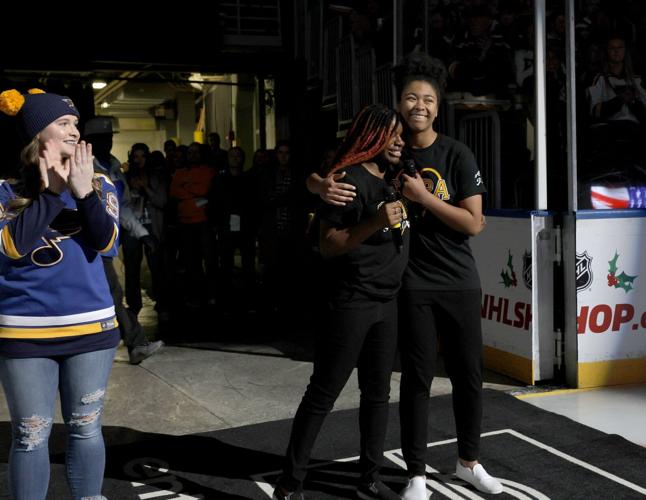 From the shadow of the spotlight, the proud teacher held up his phone with his left hand and pumped his fist with his right. He then wiped tears from his eyes and gave a double high-five to another teacher.

“Arts help heal,” said Dr. Willie Kilpatrick, who stood on the other side of the Enterprise Center boards, while two of his students sang “The Star Spangled Banner” at Monday night’s Blues game. “And just seeing them do it, it's just overwhelming. As we come together, as we chart our way through, (wondering) what are the next steps — this is the next step.”

Anthem singers Sydnee Lovett and Zariah Taylor attend Central Visual and Performing Arts High School. Twenty-eight days ago, their school in south St. Louis endured a shooting. A former student killed teacher Jean Kuczka, 61, and student Alexzandria Bell, 15. Seven others were injured on the campus, which is shared with another high school — Collegiate School of Medicine and Bioscience.

The Blues invited members from the school community, as well as first responders and doctors, to gather Monday for a chance to heal from hell. CVPA teachers and other staff members were invited to enjoy the game from Enterprise Center suites. Dr. Kacy Shahid, the CVPA principal, was one of the guests who dropped the honorary first puck. Blues captain Ryan O’Reilly greeted the group on the ice. And the team surprised the school with a $25,000 check to the CVPA arts program, in memory of Kuczka and Bell.

“It's our first gathering that's not in the spirit of sorrow,” Dr. Shahid said. “We are gathering with the intent to celebrate and keep our focus on rebuilding. … The mission for me is to rebuild and not let what happened on October 24 define who we are as a school community. I considered us one of the best schools in the region — we still are. The incident doesn't define us. It was horrific, and it was very traumatic, and I don't want to diminish what happened on that day. However, we want to get to a place of normalcy.”

For so many of these students, creativity is normalcy. They flourish when given an opportunity to make art. Monday was a cool chance to showcase this. On the main concourse, paintings and colorful crocheted animals from CVPA students were on display.

“Most of the things I’ve crocheted have helped me get through it,” CVPA senior artist Gissel Montoya said, “and helped me express my feelings.”

And Lovett and Taylor got the rare offer to sing in front of a packed Enterprise Center.

“Since I was a kid, singing has been my passion — I rehearse these type of days so you'll be ready for these type of days … ” said Taylor, a senior. “The crowd, the cheering. I didn't even think about how loud the applause would be. It just feels good.

“When you go through those types of things,” she said of the school shooting, “you never know how you will react. Sometimes your reactions and how you take things surprise you. I feel for a while I was in shock. …

“But I have arts as far as singing, I draw, I sew … it’s like therapy for me. So as days went on, it got easier and easier. And then this opportunity on top of that? It just feels good. Our school is like a family. So it feels good to be around a support system and uplift each other.”

Dr. Shahid said research shows that arts can be healing. This works in concert with how sports can be therapy — we saw that with the valiant cross-country runners who ran the weekend after the shooting, honoring their late coach Kuczka.

“We saw it during COVID and we're going to see it even during this dramatic time,” the principal said. “So I'm excited and honored that the Blues would even consider us and consider our students. This just gives them an opportunity to be able to perform, to be seen, to feel valued, to be heard — that is the goal.”

We hear that time marches on. But after a tragedy, for those in the immediately affected community, time might feel like the old finger cuff toy that kids played with. After tragedy you try to move forward, but time stops and tugs and keeps you present in pain. You’re constantly remembering and you’re constantly reminded. But for a night, for at least a few hours, the Blues gave this community a chance to relax and escape and just scream and sing.

“You know, this is a special city,” said the captain O’Reilly, who wore a CVPA shirt following the first game after the tragedy. “The Blues and Cardinals play a big part of that. We get such good support from our community, it's our duty to support. It’s an awful thing that happened. We'll pay our respects. It's a tragedy. It's awful. I think we have to come together. And our sport is a great way to bring people together and to say — we're with you guys and we support you guys.

“We get wrapped up in things we're doing, but for us, we’re just chasing a puck around the ice — it's not that really important in the scheme of life. And these people have lost a lot. ... It's a really amazing thing the Blues are doing, and I'm glad we're doing it, because we're part of the community and that school is a part of our community, as well.”

The St. Louis Blues hit the road for three games at Buffalo, Tampa Bay, and Miami while riding a seven-game win streak.

Hochman: Just when you think you have the Blues figured out, something crazy happens

This year, they have been so good and so bad that they don’t even know who they are.