Hochman: Brothers support Beal in his rise to NBA stardom
0 comments
Share this
{{featured_button_text}}
1 of 5 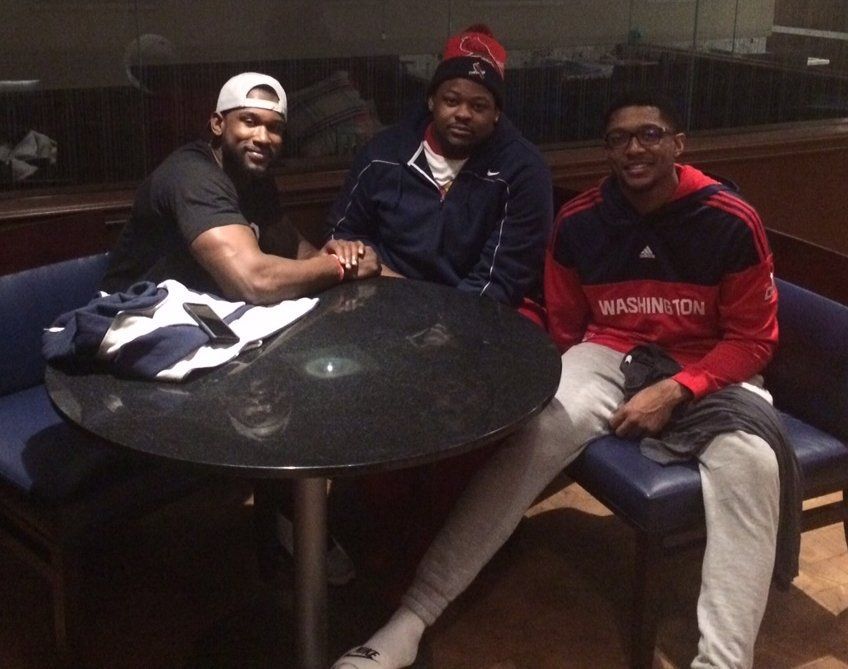 The Beal brothers (from left): Brandon, Bruce and Bradley. (Photo by Ben Hochman) 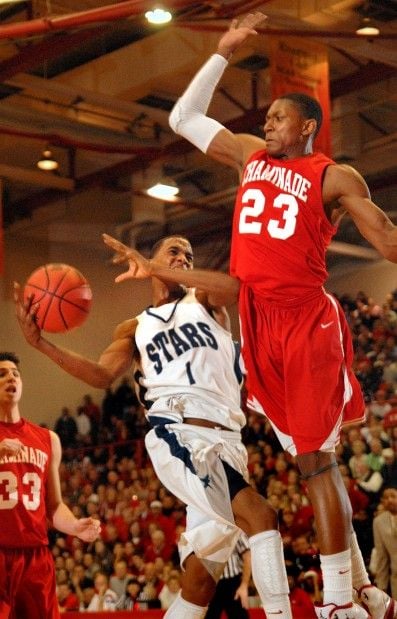 5 MARCH 2011 -- NORMANDY, Mo -- McCluer North High School basketball player BJ Young (1) drives to the basket where he is fouled by Chaminade College Prep's Bradley Beal (23) during the MSHSAA Class 5 boys basketball quarterfinals at Mark Twain Hall on the University of Missouri - St. Louis campus in Normandy, Mo. Saturday, March 5, 2011. Beal collected his fourth foul on the play and was Red Devil coach Kelvin Lee was forced to remove him from the game for several minutes. The Stars upset the Red Devils 57-56 to advance to MSHSAA semifinals. Photo by Sid Hastings � For the Post-Dispatch 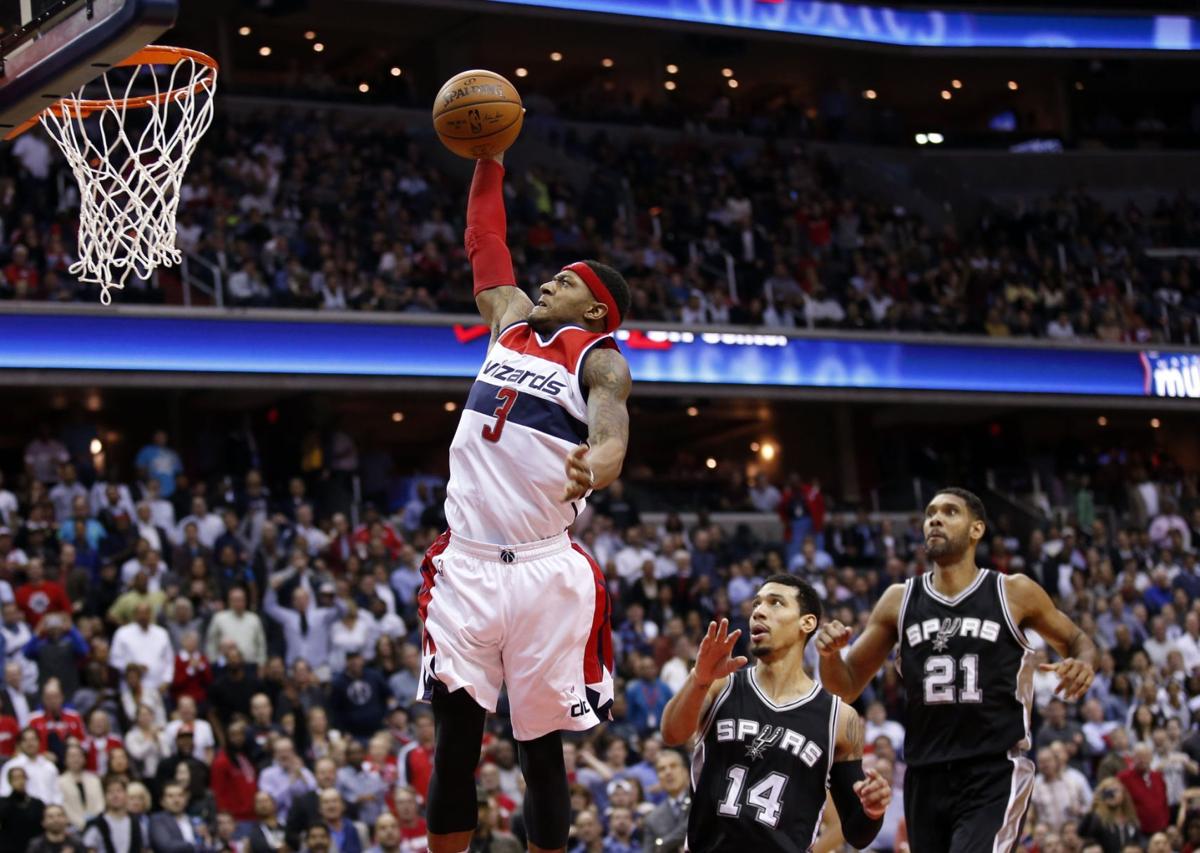 Washington Wizards guard Bradley Beal goes in for a dunk in front of San Antonio Spurs guard Danny Green (14) and center Tim Duncan (21) during the second half of an NBA basketball game, Wednesday, Nov. 4, 2015, in Washington. The Wizards won 102-99. (AP Photo/Alex Brandon) 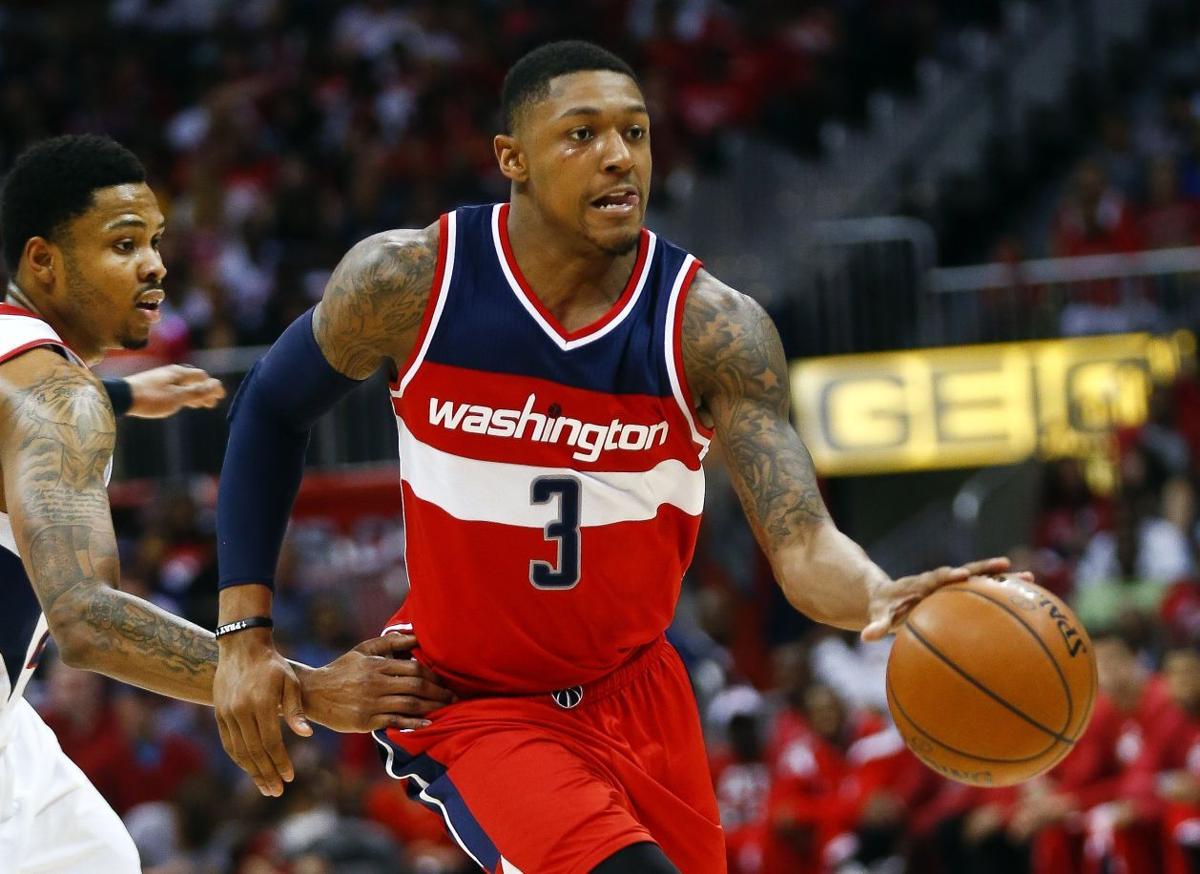 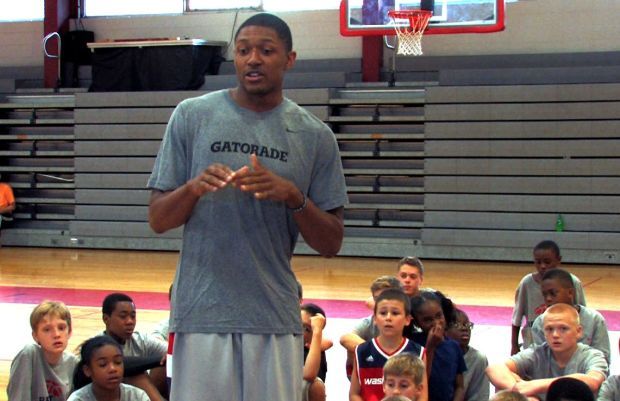 WASHINGTON • Here, on the Wizards practice court, with a shooting arc that resembles the Arch, Beal can’t miss.

On the 3-point perimeter, he shows a little St. Louis streetball strut with each swish.

On cue, his next shot clanks.

Now, it is possible that the Beal brother in the best shape isn’t the NBA player. Brandon here, at 6-feet-4, is a personal trainer, with a chest so incredibly hulking, it seems the seams of his Vianney T-Shirt are, well, hanging on by a thread. Rebounding beneath the bucket is his brother Bruce, two years Brandon’s junior, at 28. Bruce is a little past his playing days – he played football at Alabama State, while Brandon played football at Northern Illinois – but he’s also tall, and he’s wearing a white Cardinals shirt with long red sleeves, red pants, red sneakers and a red Cardinals stocking cap.

In a city of ambassadors, the three Beal brothers are the St. Louis delegation.

“Born and raised – you can’t take it away from us,” Bruce explains.

On a day to celebrate family, let’s meet Bruce and Brandon, who moved out here to assist their brother, the great shooter Bradley Beal, who’s a possible NBA all-star this season for the Washington Wizards.

And on a day to give thanks, the humble NBA player explained he might not be the player he is – and the man he is – if it wasn’t for his two older brothers.

“They push me to where I am today, and I always give them credit because they never let me get complacent with anything, and I respect that,” said Bradley, who entered the week averaging 20.4 points per game for the Wizards, a playoff-series winner in each of the past two seasons. “Brandon was my favorite basketball player, and Bruce pushed me in the gym for countless hours. It’s great to have two role models who you look up to, and at the same time, they’re your brothers and family. That really hits home.”

LOOKING UP TO BIG BROTHER

Who was your favorite player growing up?

The question is such an “us” question. You let the words soak in, and you’re 11 again. No matter how overconfident you are in life, or even no matter how soulless, everyone can let their guard down and let someone into their childhood, to share the answer.

Your favorite player says something about who you were then – and even who you are now. In a weird way, some boyhood man-crush is part of your adult identity.

Which all makes it interesting that the NBA player’s favorite player wasn’t an NBA player.

“Brandon was my favorite player,” reiterated Bradley Beal, during a sitdown with me and his two brothers in the Wizards’ players lounge. “I’d go with them to the gym, to their practices – I’m just sitting there, learning, but also watching them, mimicking them, wanting to be like them. The path they were going down was the right one.”

The 6-5 shooting guard is in his fourth NBA season, but he’s only 22. So Bradley was in elementary school when Brandon, and then Bruce, played for Vianney (Bradley, of course, prepped at Chaminade). During Brandon’s basketball games, Bradley would nestle up near the bench.

“My grandmother later told me about how his eyes never left me,” Brandon said. “Wherever I went, that’s where his eyes went. I had no idea.”

The Beals first lived in University City, and later in Normandy, which both older brothers described as a rough area. But this isn’t one of those sports stories about surviving; this is a story about attacking, and how a strong family made their kids even stronger. The Beals were a two-parent household, with grandparents also in their lives.

When Bradley was 9, he hit eight 3-pointers in a half. That’s when Bruce knew.

And during those elementary summers, the older brothers were in high school, “and before there were training academies and guys working out with this guru and that guru, we would go around St. Louis, playing at all the local outdoor courts,” Brandon said. “And we take this little kid with us, playing 5-on-5, fullcourt, and this kid was embarrassing 20-year-olds at the time. He’s hitting shots and making moves that even I couldn’t make.”

Bradley Beal is, if possible, too nice.

That’s my takeaway. And he’s not just “athlete-nice,” which is like “athlete-funny,” in which non-athletes give athletes the benefit of the doubt, because these men are larger than life (how many times, during a televised sports interview, do you hear the media cackling at a joke that lacked actual comedy?).

So, yes, Bradley Beal is genuinely generous, gracious with grace. He talks to you like an old friend.

“Try to find someone to say something bad about him,” a Wizards PR member asked, already knowing the answer.

Occasionally, a veteran teammate will even come to Beal for advice about leadership. A particular teammate, Garrett Temple, has become close friends with Beal, and thus with the Beal brothers.

“You can tell how close they are just by the way they act and joke around with each other,” Temple said. “You can tell Brad’s the youngest, they look out for him, have a protective type of vibe.

“When I first got to the team, what surprised me the most was – how poised he was, how grounded he was, how humble he was as a person. And to see him grow as a basketball player, and to stay with that same personality, that’s a testament to how his parents raised him and him being a Christian man. That’s the only way you could be this grounded – we’re all human, so to reach this level he’s at right now, and to be this humble?”

This level he’s at right now is the next level.

I know, I know, this isn’t an NBA town, but St. Louis needs to rep Bradley Beal the way Bradley Beal reps St. Louis. Consider that in the playoffs last spring, at age 21 (21!), Beal averaged 23.5 points, 5.5 rebounds and 4.5 assists. And that he and John Wall make up, arguably, a top-three backcourt in basketball. And that earlier this month, he hit a game-winning 3 to beat the San Antonio Spurs. And that for however nice he is – did I mention he’s nice? – he also “has a fire burning on the inside,” according to the man who scouted him, Wizards general manager Ernie Grunfeld. “He’s a very competitive guy. … He has all-star abilities, yes. He’s picked up his game, getting into the playoffs. And he has pride – he wants to be really good. And he’s not afraid to put in the work to accomplish that.”

Because, after all, Brandon and Bruce wouldn’t be afraid to put in the work. And as such, they’re here to make sure Bradley still will – as if there’s a question.

The Beal brothers (from left): Brandon, Bruce and Bradley. (Photo by Ben Hochman)

5 MARCH 2011 -- NORMANDY, Mo -- McCluer North High School basketball player BJ Young (1) drives to the basket where he is fouled by Chaminade College Prep's Bradley Beal (23) during the MSHSAA Class 5 boys basketball quarterfinals at Mark Twain Hall on the University of Missouri - St. Louis campus in Normandy, Mo. Saturday, March 5, 2011. Beal collected his fourth foul on the play and was Red Devil coach Kelvin Lee was forced to remove him from the game for several minutes. The Stars upset the Red Devils 57-56 to advance to MSHSAA semifinals. Photo by Sid Hastings � For the Post-Dispatch

Washington Wizards guard Bradley Beal goes in for a dunk in front of San Antonio Spurs guard Danny Green (14) and center Tim Duncan (21) during the second half of an NBA basketball game, Wednesday, Nov. 4, 2015, in Washington. The Wizards won 102-99. (AP Photo/Alex Brandon)