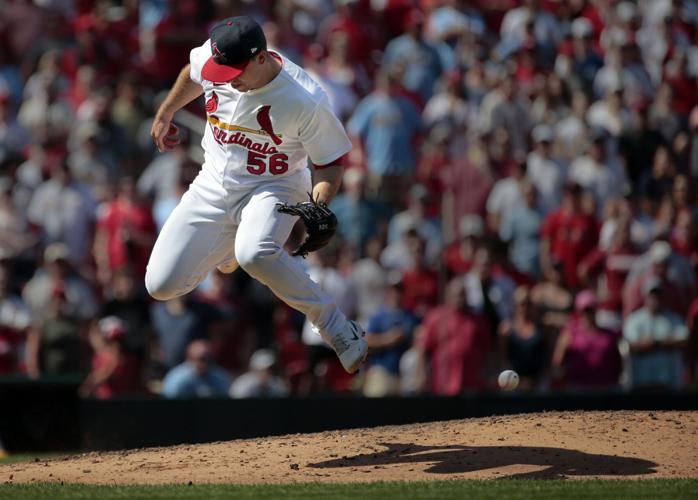 Cardinals reliever Ryan Helsley jumps over a ground ball hit by the Brewers' Hunter Renfroe in the ninth inning to end a game the Cards won 6-3 on Aug. 14, 2022, at Busch Stadium. 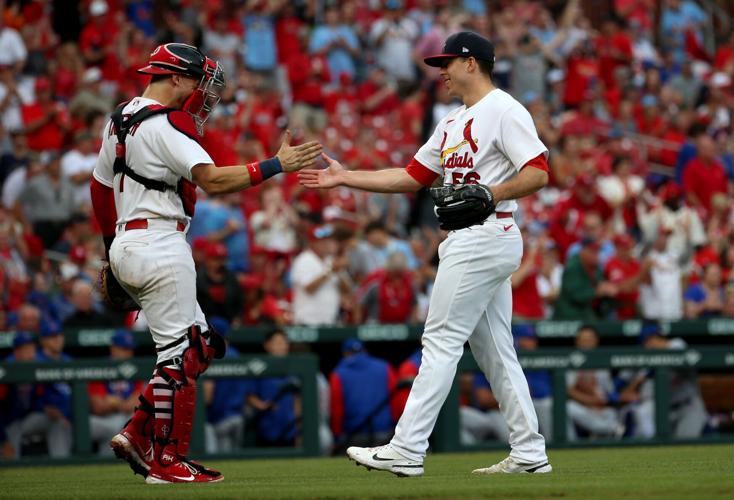 If you didn’t know the rest of the résumé and only knew a closer had a 4.05 ERA in his past six appearances, you’d be a little alarmed, right?

But because the rest of the résumé is impeccable, most people aren’t worried about Ryan Helsley. And I’m not worried either — not yet anyway — but I wanted to point out that the Cardinals' closer hasn’t been lights-out lately.

Has he done the job? Yes. He’s still getting saves.

But in five of his past six games, Helsley has allowed a base runner. And his opponents’ OPS is .863.

Sunday in Pittsburgh, he allowed a homer in the ninth (but got the save).

Saturday in Pittsburgh, he allowed a double, single and run in the ninth (but got the save).

And on Aug. 28 against Atlanta, he entered the seventh with two runners on ... and promptly allowed a three-run homer to Dansby Swanson.

The good news? There isn’t anything too glaring on his analytics. Per Baseball Savant, his spin rates, horizontal break and vertical break remain in their regular parameters. Now, his slider’s vertical movement is down by about an inch since Aug. 7, and it's being placed in the middle of the zone a little more often. So he’ll need to work on that, along with the Cardinals’ pitching department.

But the optimist thinks that Helsley will fix his issues and revert to his All-Star success — the realist just wanted to point out what’s happening lately to this point.

Even some of the best closer campaigns in Cardinals history feature a grouping of groan-worthy outings. In 2015, Trevor Rosenthal saved 48 games, but for a 10-game stretch in July he had a 6.30 ERA with a .933 opponents’ OPS. He made some tweaks and in the next 20 games had a 0.89 ERA.

Overall, Helsley’s 2022 has been the best year of his life (and not just because his wife gave birth to his first child). Entering Tuesday’s game against Milwaukee — a two-game set to possibly shove the Brewers down and out of contention — Helsley has a 1.26 ERA this year. He’s 9-1. He has 82 strikeouts to only 17 walks.

Only one reliever in the National League throws a four-seam fastball harder than Helsley’s average of 99.4 mph — that’s teammate Jordan Hicks (100.1).

The reliever is resplendent.

But something to consider, especially for a possible postseason series, are Helsley’s stats on no rest.

Seven of his 47 appearances have come the day after he pitched. In those seven, he has a 5.14 ERA with three homers allowed (including his most-recent outing, on Sunday). In fact, Helsley has allowed five homers this year — three on no rest, the other two on one day’s rest. He didn’t allow a homer in the 30 other games he pitched with two days' rest or more.

Before they can worry about October, the Cards need to take care of September. And they’ll need continuous contributions from their fire-baller. After Monday’s day off and reset, the Cards have seven games in six days (including a Saturday doubleheader). Daunting, sure, but following that, they have three days off in an 11-day span.

First up are the Brewers, who come to town eight games back in the National League Central Division. And while the Brewers have won four of their past five, Milwaukee is 18-21 since the trade deadline — that’s when its closer, clubhouse favorite Josh Hader, was dealt to San Diego. Against the Brewers in 2022, the Cardinals' closer has allowed just one run (in six innings), while notching two saves.

And with Milwaukee patching together a bullpen game on Tuesday — and the Cards going with the scorching Jordan Montgomery — here’s thinking we’ll hear “Hell’s Bells” on Tuesday at Busch Stadium.

While AC/DC’s song belongs, in baseball lexicon, to Hall of Fame closer Trevor Hoffmann, Helsley gets a pass because of his last name. And it really is an electric experience — the deep toll of bells, followed by a lightning-like guitar intro — as Helsley emerges from the bullpen. That said, the Cards took it a little too far last week. They turned off all the stadium lights and then revealed some professional-wrestling-type intro for Helsley, which included “Hell’s Bells.” It just seemed a little too much.

Also, how embarrassing would it be if he blew a game after that?

Or perhaps the thought is: How could he possibly blow a game after all that?

But as long as that song is playing in some capacity at Busch, that means the Cardinals are winning late.

And it’s up to Helsley, not the stadium operations folks, to turn out the lights.

Goold: There's a case to be made that Albert Pujols is a top-five player all-time

Cardinals reliever Ryan Helsley jumps over a ground ball hit by the Brewers' Hunter Renfroe in the ninth inning to end a game the Cards won 6-3 on Aug. 14, 2022, at Busch Stadium.