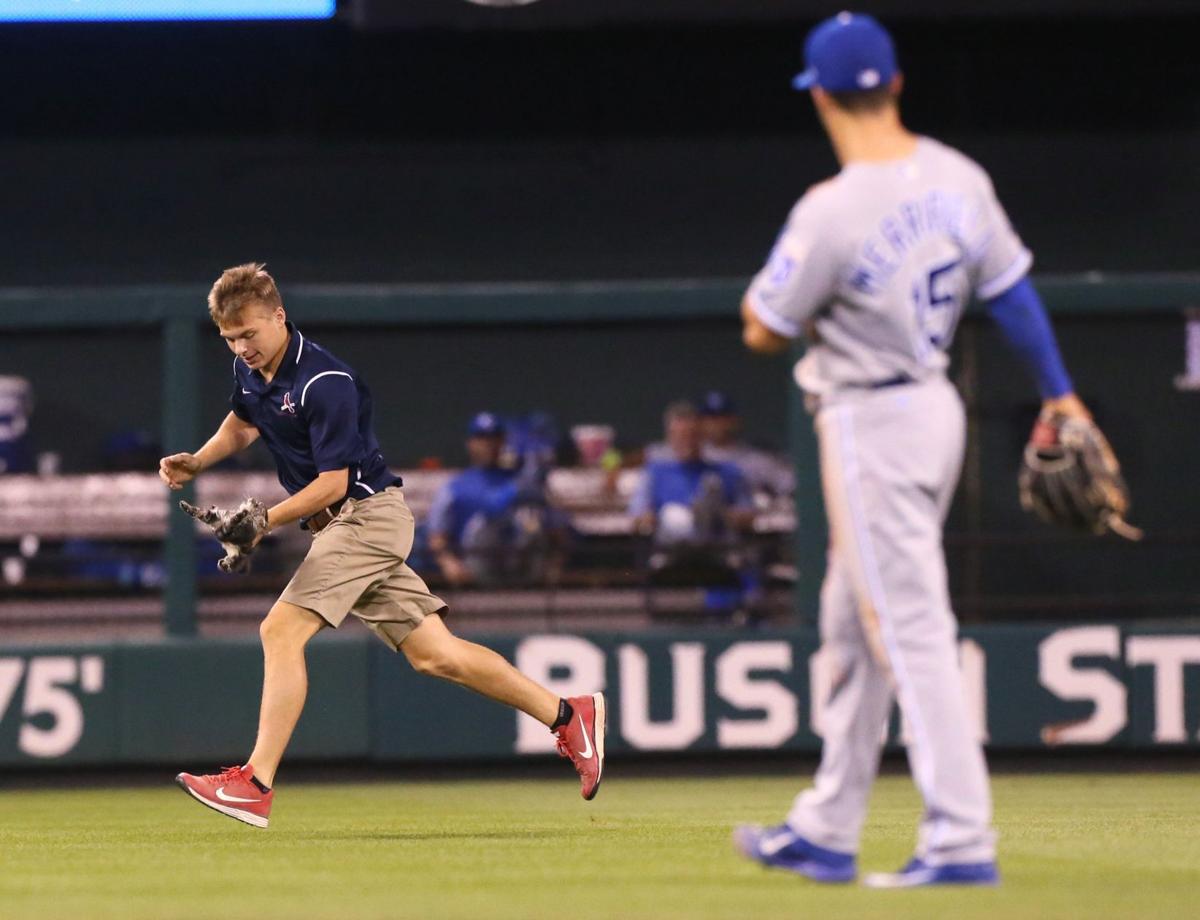 Busch Stadium grounds crew member Lucas Hackmann retrieves the cat that ran across the outfield in the sixth inning of Wednesday's game between the Cardinals and Royals. Photo by Chris Lee, clee@post-dispatch.com 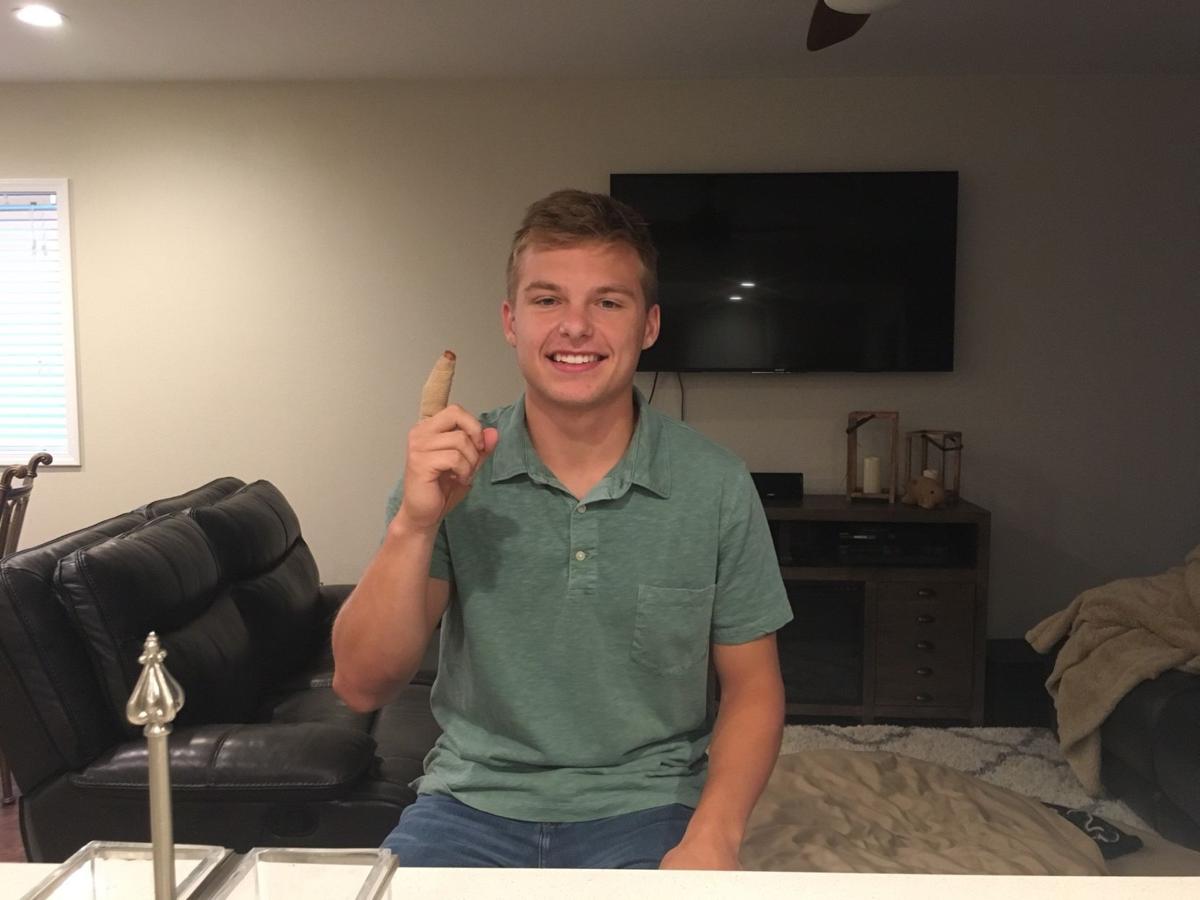 On Thursday morning, Aug. 10, 2017, Lucas Hackmann laughs off the cat bite on his finger from the night before at Busch Stadium

If you haven't seen it yet, a cat ran on the field at Wednesday's Cardinals-Royals game. Lucas Hackmann, a 20-year-old member of the Busch Stadium grounds crew, retrieved the cat — and had his finger bit in the process.

Next pitch in the game? A Yadier Molina go-ahead grand slam in the sixth inning. Cards go on to win 8-5.

On Thursday morning, I caught up with Hackmann on the phone and he gave the play-by-play. Sure enough, it all began with him standing next to the most-famous groundskeeper in Cardinals history — Tim Forneris, who got Mark McGwire's 62nd home run ball in 1998 and returned it to McGwire.

Here are the words of Hackmann, a 20-year-old native of O'Fallon, Ill., who attends Western Kentucky University (and he's fine — got shots and is on antibiotics):

"We were about to drag the field – two outs, bottom of the sixth – and I was actually the raker. So me and Tim Forneris, ironically, were at the steps. I'm sitting there and the crowd goes wild. I look out and go, 'Oh there's a cat, how cute.' And then I realized – no one's going out there to get it. I guess it's kind of our job, maybe the ushers, it's kind of in-between. I looked at Tim, and I can lose my rake real quick, so I said – 'Tim should I go get it?' And he's said 'Yeah.' So I get to the top step, and I realized how popular this cat is getting. I looked back again and realized – when I run out there, it's going to be kind of a big deal.

"I ran out there and I chased it down – I don't know what I was thinking, but when I picked it up, honestly I thought I was just going to have this cute little jog back into the dugout, and I'd have this little kitten in my hands. I put it in my arms, like, pretty secure to keep it safe. I put my hand like right in front of its mouth, not even thinking anything is going to happen. I take like five steps running and it just latches on to my index finger! That's when I flipped. But I remembered the crowd going wild – oh, I guess we're cheering for that! – so I grabbed it, and I don't have cats, so I didn't know how to grab it, so I'm just trying not to get bit again. I kind of put it in the position that I could.

"I ended up getting bit 3-4 more times and getting scratched up. But the first one was easily the worst – he went into my finger pretty bad, punctured it pretty bad.

"I was going toward the dugout and was at the foul line, and I looked down there – Tim was pointing me to go outside to the concourse area where the gate is, where the fans come in. So I jump that fence (on the field) and at this point, my hand is killin'! It's hurting. I jump onto the aisle and all these fans are trying to give me high-fives! But I was not having it – 'Please, get out of my way, I've got to get this thing out of my hands!'

"I finally get outside – and I wanted nothing to do with this cat at this point. My hand is just covered with blood. It looked pretty rough. So I got out to the Stan Musial statue, and I just set it down right there. I started to walk back in, and the cat was trying to get back in! Me and the ushers were blocking it – at this point, we didn't think that anyone was going to want the cat. And then some ushers said, 'Hey, you need to go to First Aid right now.' And oh, yeah, I forgot – the whole grand slam thing! I forgot there was a whole game still going on.

"It was bases loaded, two outs, Yadi was up – it was a huge situation. And I remember the crowd going wild when I was up there – I was like, yeah, I get it, I got the cat off of the field (laughing) – and then I realized it was bases loaded. What happened? An usher told me. I kind of put two and two together. And was like – oh dang, this has got way bigger than what it was. This is going to blow up.

"So then I went to First Aid, and my phone is going absolutely berserk at this point. I've got First Aid people dealing with me, telling me I need to go to the hospital. And I've got my boss calling me – 'What did you do with the cat? Matheny wants it!' And I said, 'Oh that's not good – I set it outside!'

"I went back to our break room and my dad came up and took me to the hospital. I was there until almost 1 o'clock. All the nurses all knew what happened, so they were taking pictures with me."

Hochman: Look what the cat dragged in — hope

With Ben Frederickson out of town, sports columnist Benjamin Hochman plays both roles in the debate about great Missouri baseball towns in thi…

DYERSVILLE, Iowa • If “baseball heaven” had a heaven, it’s this, hovering above St. Louis like ballpark lights in the sky.

The Cardinals' rally cat appears to be on the loose somewhere in downtown St. Louis.

Mike Matheny definitely got this one right.

Busch Stadium grounds crew member Lucas Hackmann retrieves the cat that ran across the outfield in the sixth inning of Wednesday's game between the Cardinals and Royals. Photo by Chris Lee, clee@post-dispatch.com

On Thursday morning, Aug. 10, 2017, Lucas Hackmann laughs off the cat bite on his finger from the night before at Busch Stadium