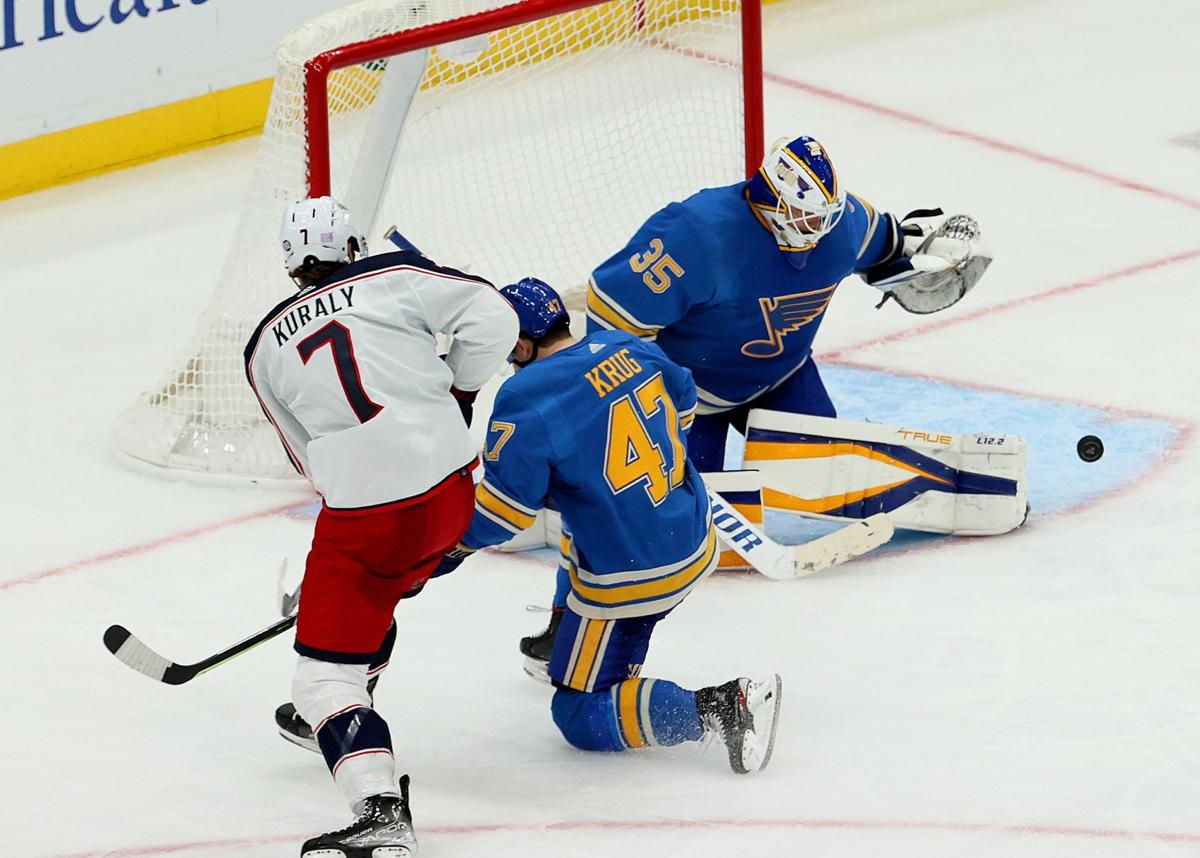 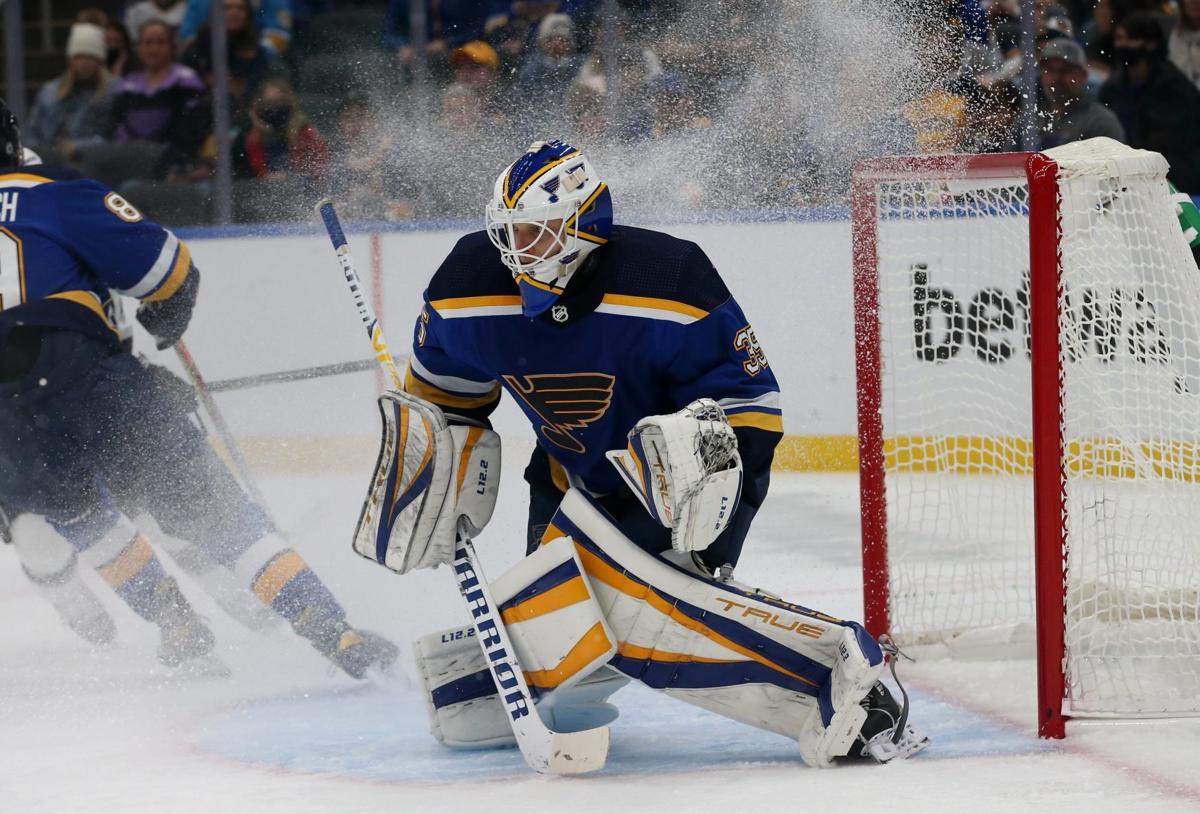 St. Louis Blues goaltender Ville Husso (35) makes a pad save in second period action during a hockey game between the St. Louis Blues and the Los Angeles Kings on Monday, Oct. 25, 2021, at Enterprise Center. Photo by Laurie Skrivan, lskrivan@post-dispatch.com

Tuesday should inspire a new chapter to the adventures of “Puck Finn.”

Ville Husso, the Blues’ Finnish goaltender, is expected to start his third consecutive game for the first time in his NHL career. The plan, no, wasn’t to have Husso ever start three straight for St. Louis. But starter Jordan Binnington is out in COVID protocol, so Husso’s your huckleberry.

And while I don’t expect this to be a “Wally Pipp situation” of a starter losing his job — perhaps a more-modern reference would be to a “Jordan Binnington situation” — Husso has filled in admirably, if not acrobatically. Husso is earning trust ... and earning chances to play more games when Binnington is back ... and, possibly, earning himself a new contract for next season.

“I’ve always told you we have great goalies,” Vladimir Tarasenko said recently when asked about Husso.

In his six games this year, Husso posted a 92.9 save percentage and allowed a 2.33 goals against average. Small sample size, to be sure, but those numbers would rank sixth and 11th among starters who have played 10 or more games. “Puck Finn” is playing so well, word might have spread up the Mississippi all the way to Hannibal.

Husso got the win when the Blues beat the jackets off Columbus, but he returned to the bench as Binnington topped Tampa. The next game was against Tampa, too. By then, Binnington was out and Ville was in. Husso fared OK in the loss — and then played much better in the overtime loss at the Panthers. He stopped 48 shots. That’s an absurd number. Three went in. Blues defenseman Jake Walman said he even made a point to tell Husso how impressed he was.

“It's fun watching him play when he’s confident like that,” Walman said of his 26-year-old teammate. “I saw it the AHL, too. So seeing him do it up here is great — it helps our team.”

The overwhelming storm from Florida, moving toward the Midwest, is set to hit St. Louis on Tuesday night around 7. The Blues host those same Panthers at Enterprise Center. It might be the toughest game to win this season. The besieged Blues likely won’t have assist stud Robert Thomas (upper-body injury). Numerous other Blues are in protocol. And some of the key guys who are actually healthy are underachieving.

But the silver lining is that Husso is getting a whole bunch of work. He’s getting an education you can’t get from game film or hockey talk.

“I think he's played really well,” said Blues coach Craig Berube, whose Blues are 12-8-4 after starting the season 5-0-0. “Obviously there are always goals that you want back — he even said that the last one (against the Panthers) was a heck of a shot. But he's played really well. Looked real confident in net.”

Finland is the native land of netminders, its greatest exports including refined petroleum, sawn wood and goaltenders. Some of the top goalies of recent generations are Finns, including Pekka Rinne, Kari Lehtonen, Niklas Backstrom and Tuukka Rask, the Boston Bruin who the Blues bested in the 2019 Stanley Cup Final. Every summer, Husso heads home to Helsinki to work with fellow goalies.

This past summer, Berube sent Husso home with a task.

“I didn’t think he was conditioned well enough, so that was first and foremost with my conversations with Ville after the season,” Berube said. “So I thought that he did a good job of getting himself in better shape. And he's continued to work on it. For me, he's working harder in practice. He's here early all the time doing extra in the weight room and things like that. So that was, from me, what I wanted really to accomplish this summer.

“And then (Blues goalie coach) David Alexander works with a guy over there that Ville works with, so they communicated on some things that Ville needed to work on and get better at.”

Husso will likely start the next few games. The Blues host Florida on Tuesday, Detroit on Thursday and Montreal on Saturday. Sunday is a back-to-back against Anaheim — goalies seldom play both games of a back-to-back, but Sunday is also the day Binnington should be available, once again.

Then again, Husso was out for two weeks when he was on the COVID list.

So maybe Saturday or Sunday we’ll see Husso and ... who?

Hochman: The Blues are winning comebacks at a historic pace — but how will that play in the playoffs?

“We don't really panic or stress out or anything like that when we're down a goal or two,” Blues forward Oskar Sundqvist said. “We just keep going.”

Hochman: Blues goalie Husso, a free agent this summer, is an important part of the present — but what about the future?

"Confidence is everything, especially if you're a goaltender trusting yourself," Blues teammate Brayden Schenn says of Husso.

Baseball can be bigger and cooler and more-conducive to modern times. And it starts with creative thinking and envelope-pushing.

Hochman: With NFL quarterbacks such as Mahomes and Allen, the evolution has been televised (and retweeted)

The future is now with NFL signal-callers.

Hochman: 'Huuuuus!' Backup goalie Ville Husso makes a name for himself in Blues' win against Nashville

On Monday night, No. 35 in the Blues’ 1990s-style sweater looked more like No. 31 in that sweater, be it Grant Fuhr or Curtis Joseph.

Kyrou can do it all — dipsy-doodle and dangle and deke and toe-drag and “The Datsyuk.”

This isn’t to say the Blues' No. 77 is a Ray Bourque on defense, but he’s at least a Jay McKee.

Hochman: Race year is here — so, what should St. Louisans expect at the NASCAR event?

Hochman: From the ponds to rinks lit by headlights, the Blues' Faulk and Perunovich were raised in the 'State of Hockey'

Minnesota hosts Saturday's Winter Classic between the Blues and Wild, so two Blues from Minnesota shared their childhood memories.

St. Louis Blues goaltender Ville Husso (35) makes a pad save in second period action during a hockey game between the St. Louis Blues and the Los Angeles Kings on Monday, Oct. 25, 2021, at Enterprise Center. Photo by Laurie Skrivan, lskrivan@post-dispatch.com