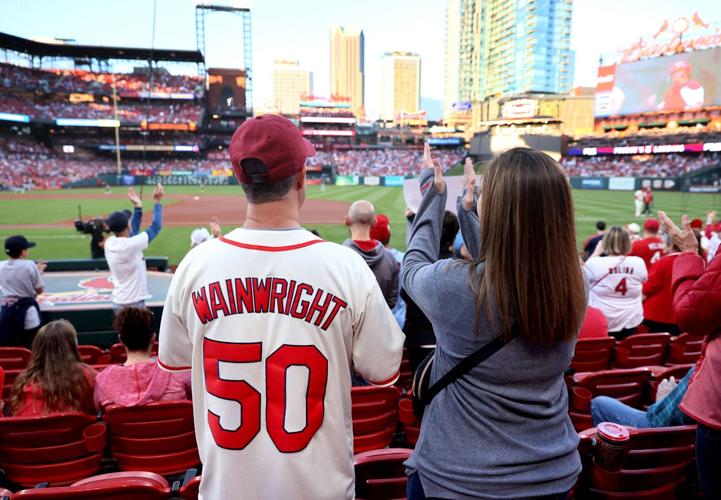 Cardinals fan Doug McCallister, sporting his Adam Wainwright jersey, and his wife, Misti, stand for introductions before a game between the  Pirates and Cardinals at Busch Stadium on Saturday, Oct. 1, 2022. "I like who he is. I like the person he is" said McCallister about Wainwright. The McCallisters are from Barry, Ill. 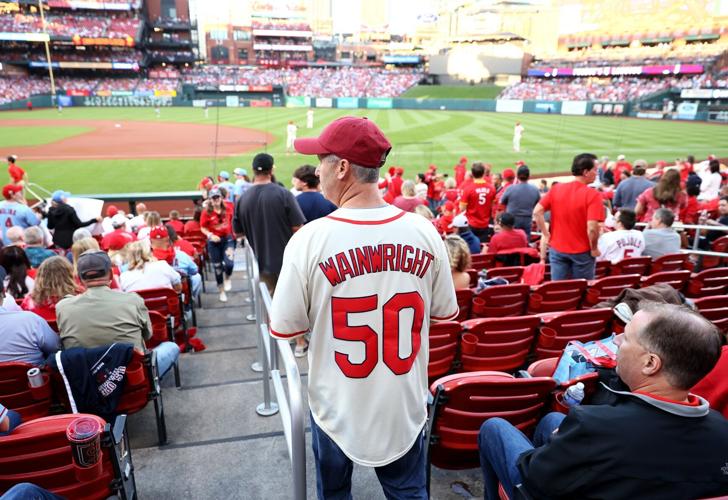 Cardinals fan Doug McCallister, from Barry, Ill., walks to his seat along the first base line sporting his Adam Wainwright jersey before a game between the Pittsburgh Pirates and St. Louis Cardinals at Busch Stadium on Saturday, Oct. 1, 2022. "I like who he is. I like the person he is" said McCallister about Wainwright. Photo by David Carson, dcarson@post-dispatch.com

There was Wayne Davidson (Wainwright jersey-wearer No. 1) who serves in the U.S. Air Force — but on Saturday wore a different uniform.

“Wainwright grew up in St. Louis along with me as a child growing up,” he said. “At this point, it feels like family almost, as weird as that may sound. It’s been years. It’s an awesome experience.”

Sharon Utterback (2) described the 41-year-old Cardinal lifer as “an uplifter. He’s always got something good to say about everybody else. He’s part of the heartbeat of the team.”

Utterback attended Friday’s game with her mother, Helen Fisher, who has kept a notebook since 1999 of every Cardinals score. When Wainwright won his 20th game in 2020 at Wrigley Field, a “Waino” pitch was fouled Fisher’s way. She had nachos in one hand, soda in the other. The ball bounced and bounced and popped up right toward her neck. She captured it under her chin. At a Winter Warm-Up, the grandmother of 16 had Wainwright sign the ball.

There was Belinda Shaw (3) and her husband of 40 years, Reginald Shaw (4), who drove over from Memphis for Friday’s game in matching jerseys.

“He always gives his all,” Belinda said.

For fans such as Aaron Hunsaker (5), they fell for Wainwright during the 2006 postseason, “when that big curveball struck out Carlos Beltran!” said Miles Anderson (6).

“It was frickin’ incredible — he froze him,” said Mark Goodwin, alongside his wife Tammy (7). They celebrated their 31st anniversary this past week.

That’s how the fandom started for Dalton Day (8), who drove 10 hours from Ada, Oklahoma, for the weekend with his fiancée, Destiny, and baby boy, Cross. Darrell Smithee (9) also drove from the Sooner State — eight hours from Muskogee, along with his son, to see a pitcher “I’ve followed forever,” the 60-year-old said.

And Sheila Even (10) drove up from Norman, Okla. Asked to describe Wainwright, she simply and beautifully said: “he’s (bleeping) awesome.”

Austin Schick (11) loves how “he can paint the corner.” Steve Stough (12) has “never seen anybody pitch a curveball like he can.” Doren Wells (13) tried to throw that kind of curve as a college hurler, but Wainwright’s is “hellacious.” Zach Zeller (14) of Ferguson described the curveball as “12-to-6.” Preston Leinenbach (15) “fell in love with the curveball” as a young boy in Indiana.

“He’s just fun to watch,” Lindsay Wilson (16) said. “He’s an awesome player — He seems like even a better person.”

Sarah Frizzell (17), standing in a slithering, long line Saturday to enter the stadium, spoke of Wainwright’s kindness in the community. “He does a lot of good things for his foundation,” said Mary Jane Butler (18), standing next to her daughter Jamie (19).

“He just seems like a genuine person,” David Calkins (20) said.

“He brings a lot of energy to the club,” said Tonya Hindersmann (21). “Seems to be a good person on and off the field.”

“The reason No. 1 I like him is because of his Christianity,” said Sheila Vanhorn (23), who drove up from Paragould, Ark. “And he’s a very good role model for the boys inside the dugout.”

Wainwright made an impact on Cards teammates from Scott Rolen to David Freese to Matt Carpenter. And — to Cards fan Matt Carpenter (24) from Dupo.

That’s in reference to the start this fall in which Wainwright and catcher Yadier Molina broke the record for starts as a battery — 325 and counting. Michael Borror (25) was in the stands, too. On Saturday, he wore a No. 50 jersey, but the name plate said UNCLE CHARLIE. Shannon Edlen (26) also wore that jersey on Friday — the night of the Wainwright bobblehead giveaway (Molina’s bobblehead was the giveaway on Saturday).

“I love his relationship with Molina,” said Cindy Cooney (27), sipping a Saturday beer at Ballpark Village. “It’s going to be sad when Molina’s gone. I think Waino’s going to miss his best friend.”

Indeed, he’s beloved from St. Louis to Sydney. As in Australia. Where Brad Briggs (29) lives. He grew up a cricket fan, then discovered Albert Pujols thwacking homers. Briggs fell for the Cardinals and that great, lanky righty. Briggs spent his holiday in the states and in St. Louis, along with his fiancée, Whitney Bowen.

Dom Gambino (30) wore a No. 50 jersey Saturday, but asked why he likes Wainwright, he chuckled. Turns out, he’s a White Sox fan visiting from Illinois. His friend loaned him the jersey — and his friend’s mom taught him the importance of the No. 50.

Jordan Fisher (31) loves Wainwright in part because of his presence on social media. Wendy Guittar (32) loves that the millionaire pitcher is “down-to-earth.” As for Kentucky native Jared Haynes (33), “He’s an everyman. No flash, all business, takes it seriously. And he’s a hell of a singer!”

But on the mound, per Ken Smith (34), “He’s like Chris Carpenter reincarnated. The attitude, the seriousness on the mound.”

“What he gives to the game is priceless,” said Diana Bernhardt (35).

Michael Grant and his wife, Audrey (36), watch games with their kids in Fort Leonard Wood, where Michael is an Army drill sergeant. They love showing the pitcher to their 11-year-old daughter, a softball player.

Jolene Pohlman (39) is such a big fan, she “hollered and made of fool of myself” in the stands until Wainwright signed her No. 50 jersey.

Vicki Philips (40) arrived Saturday with her daughter, Cara, for whom Vicki passed down the love of baseball. Ashley Cumpton (41) went to the game with her own mother — and Ashley had No. 50 and No. 4 painted on her nails. Jason Metcalf (42) proudly wore the jersey of one of his first favorite players. Jeffrey Taylor (43) said, “It’s just the way he handles his business on the mound — that’s my player, man.”

Chuck Croxton (44) proudly came with “a couple other couples” from Bloomington, Ill., to see the Cards. Jan Sutherland (45) will attend Sunday’s game, too, to see this “persistent” pitcher. Pam Jerome (46) always liked players such as Ozzie Smith; never a pitcher. Wainwright changed that.

“It’s emotional,” she said of his possible last start. “I could cry right now.”

Joe Grassmuck (47) said, “It’s hard to think about the Cardinals and not think about him.”

In a wheelchair with a broken foot, Heather Henseler (48) said: “I just love how much he loves St. Louis.”

Taylor Brecht (49) doesn’t want to believe Wainwright will retire (No. 50 hasn’t announced he will, but has struggled down the stretch in 2022).

Heather Utley (50) flew to town from Orlando. She and her husband missed their connecting flight — but before takeoff, a sick boy and his father deplaned. The Utleys got their seats. And they’ll be in the red seats Sunday.

“It will very emotional, I’m sure — for everyone,” Heather said.

Albert Pujols and Yadier Molina's career longevities led them to usher in new generations while defining their own.

Cardinals fan Doug McCallister, sporting his Adam Wainwright jersey, and his wife, Misti, stand for introductions before a game between the  Pirates and Cardinals at Busch Stadium on Saturday, Oct. 1, 2022. "I like who he is. I like the person he is" said McCallister about Wainwright. The McCallisters are from Barry, Ill.

Cardinals fan Doug McCallister, from Barry, Ill., walks to his seat along the first base line sporting his Adam Wainwright jersey before a game between the Pittsburgh Pirates and St. Louis Cardinals at Busch Stadium on Saturday, Oct. 1, 2022. "I like who he is. I like the person he is" said McCallister about Wainwright. Photo by David Carson, dcarson@post-dispatch.com