Hochman: Foul ball changes suffering boy's trajectory — and maybe that of the Cardinals' 2021 season
0 comments
Share this
{{featured_button_text}}
1 of 2 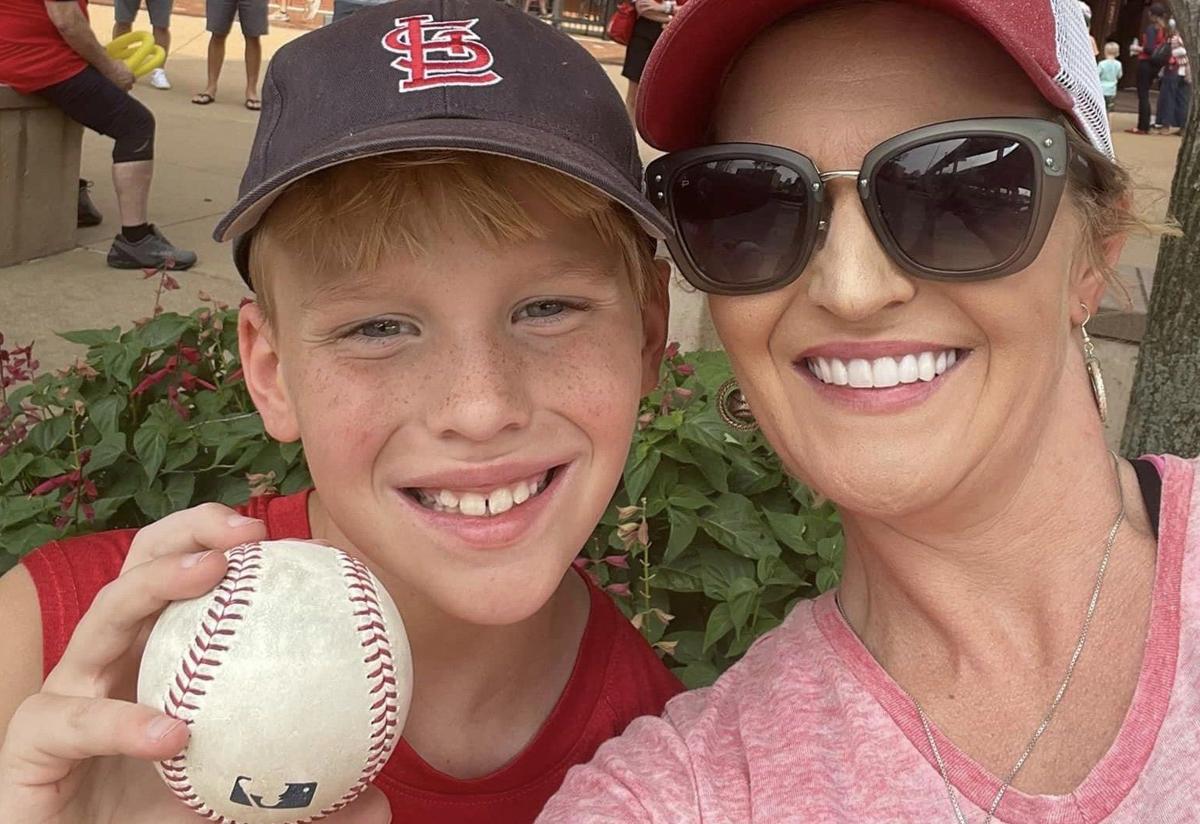 Ten-year-old Vito Bertagna, left, caught a hard-hit foul ball in his glove at a Cardinals game on Sept. 9, 2021. His mother, Tiffany, had taken him to the ballpark. (Photo courtesy of Tiffany Bertagna)

Ten-year-old Vito Bertagna, left, caught a hard-hit foul ball in his glove at a recent Cardinals game. His mother, Tiffany, had taken him to the ballpark.

The little boy has lost a sister, an aunt, two uncles, two grandpas, but not faith.

The little boy spent the summer without his mother, who was hospitalized with a frightening kidney infection, but the boy’s OK because mom now is out — and earlier this month, she took him out to the ballgame.

That’s where it happened.

“I was just sitting there and me and my friend were talking and were yelling out Lars Nootbaar’s name,” said 10-year-old Vito Bertagna, who was in a foul-territory section at Busch Stadium near the right-field foul pole. “Next thing I know, I look up and a fly ball is coming right to me. I hear my mom screaming, ‘Catch the ball!’ I put my glove up and said: ‘I got it!’ And I knew I had it.”

Left arm in the air, Vito caught the ball on the fly — “Right in the webbing!” he said.

Vito held the ball up for the crowd, who cheered him like he was a Cardinal.

“It was the best thing that could have happened to him,” said his mother, Tiffany.

When play began on September 9, Vito’s Cardinals sat 3½ games back of the final wild-card playoff spot. And three teams were ahead of them. Oh, and the Cards had lost four of their past five games.

That Thursday afternoon, one of Vito’s favorite opposing players, the likely batting champ Trea Turner of the Dodgers, came up in the top of the fifth. Two outs, the score 1-1. With one strike on him, Turner fouled the ball to Vito for the second strike — and then struck out on the very next pitch.

As Vito still beamed in the stands because of his catch, the Cards came to the plate. Tyler O’Neill homered in the bottom of the fifth — it was 2-1 Cards, which would be the final score.

From that game on, the Cardinals took two of three from the Reds, swept the Mets and swept the Padres and won Monday in Milwaukee for their ninth victory in a row.

Now, three teams are chasing the Cardinals for the final wild-card spot.

That’s at least what his family and friends are saying — that he’s the good-luck charm who helped turn things around for the Cardinals.

But it was the foul ball that turned things around for Vito.

“I saw a light in his eyes when he made that catch,” Tiffany said. “We’ve been through so much, and he’s just been really down. Like, I almost took him to a doctor for anxiety because he couldn’t even take a deep breath. That game just saved his life. Now he’s just happy. He’s back to his normal self.”

There’s something about a foul ball. It’s this integral part of a Major League Baseball game that escapes the confines of that fantasy world and crosses into the real world. I’ll never forget that feeling when I was 7 one morning, when I went into the kitchen and saw a baseball. It was a little dirty, definitely used. No. It couldn’t be. Was that from the Cardinals game my dad went to the previous night? It was. Dad caught a foul and brought a piece of the actual game into our own home. So to think that in Vito’s case, the boy himself caught the baseball and brought it home to show his own dad.

David Bertagna couldn’t believe it. Tiffany’s husband used to go to Cards games all the time — a self-proclaimed “bleacher bum,” David saw so many home run balls, but never came close to catching one.

“I showed Vito the video of his catch on MLB.com,” David said. “He was smiling ear-to-ear.”

Vito was born on February 15, 2011 — the day Stan Musial received the Presidential Medal of Freedom.

In 2018, Tiffany was pregnant with her third child. A daughter, Vella, would join Vito and his older sister, Vaydah.

But on the day Vella was born, Vella died.

“We had her cremated and she’s sitting next to our bed,” Tiffany said.

“It was absolutely horrible,” Tiffany said. “During those years, we didn’t even have time to grieve, so to say, because everybody kept passing away.”

This spring, Tiffany lost her older brother, Joseph. He was a father of six children and also a grandfather of six. Shortly after, Tiffany herself was hospitalized at Mercy South for nearly 2½ months.

“It hurt so bad to not see Vito,” Tiffany said. “It just made me want to get better.”

And so, a couple weeks after Tiffany returned home, she and Vito went to a Cardinals game.

Trea Turner came up in the top of the fifth and fouled one off. To Vito.

“It was extraordinary,” Tiffany said. “He’s going to tell everyone about it. His kids, his grandkids. . . . It was one of the happiest moments of my life. The only other two moments that could ever beat what I saw that day were the days my kids were born. He was that happy.”

Inside Pitch: That time Gordo clashed with George Brett

Inside Pitch: That time Gordo clashed with George Brett

COLUMBIA, MO. — Turns out that Jethro Franklin wasn’t the only person who lost his job. When Missouri’s defense took the field here Saturday, …

Hochman: As DeJong and Sosa vie to start in wild card game, Cards' 2022 shortstop could be Dodgers' Seager

Hochman: Get up, baby, and applaud — honoring Mike Shannon and his 50-year career calling Cardinals games

“Mute the TV and turn on Shannon! That's what people did,” David Freese says. “He’s just been around forever."

Hochman: 'There should be a soundtrack behind him.' How Harrison Bader's enthusiasm and flash infected September for Cardinals

The Cardinals' Bader entered Wednesday with a September OPS of 1.032.

“There isn't a day that goes by," Smith said, "that a member doesn't say, ‘Hey, tell my guest about the Ryder Cup.’”

Ten-year-old Vito Bertagna, left, caught a hard-hit foul ball in his glove at a Cardinals game on Sept. 9, 2021. His mother, Tiffany, had taken him to the ballpark. (Photo courtesy of Tiffany Bertagna)

Ten-year-old Vito Bertagna, left, caught a hard-hit foul ball in his glove at a recent Cardinals game. His mother, Tiffany, had taken him to the ballpark.