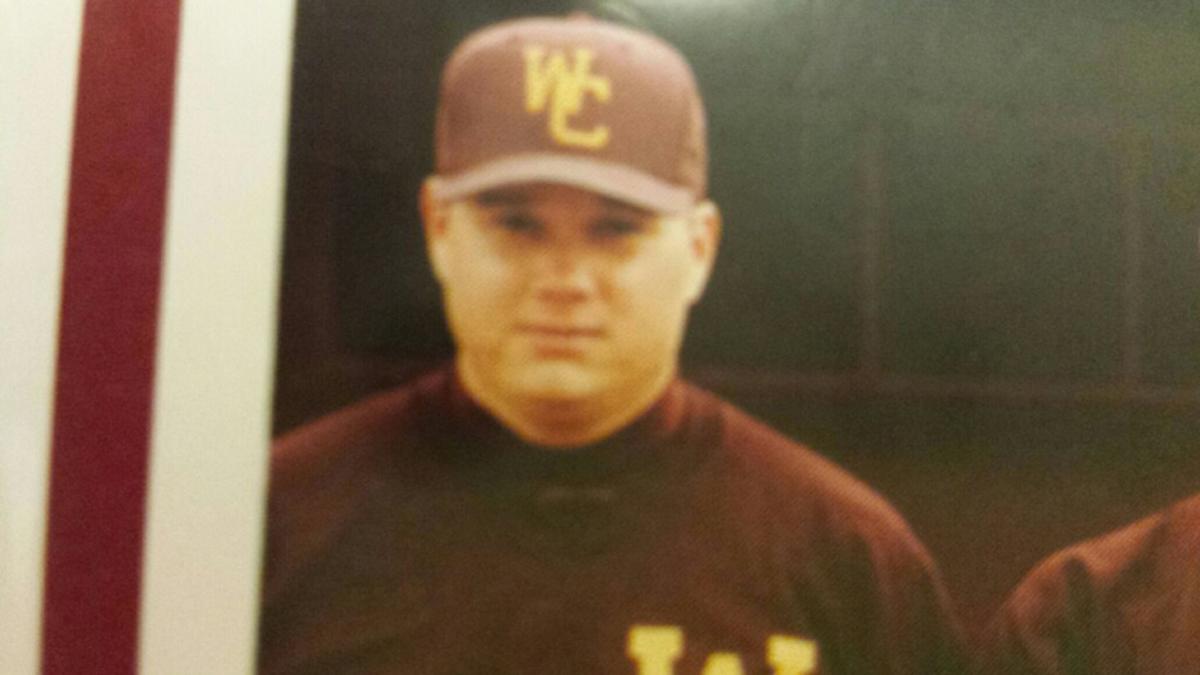 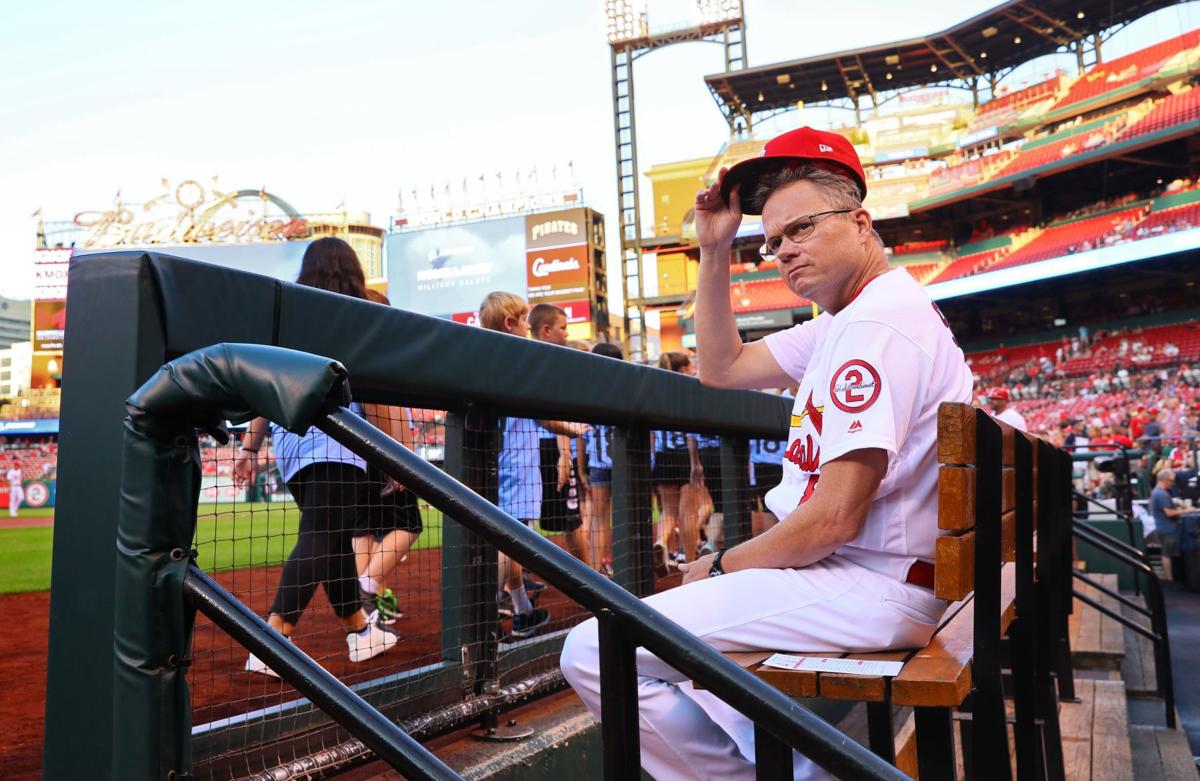 Mike Shildt settles in before his first official game as manager on Tuesday, Aug. 28, 2018, against the Pittsburgh Pirates at Busch Stadium in St. Louis. Shildt will get a three-year contract Photo by Christian Gooden, cgooden@post-dispatch.com

When the manager of the St. Louis Cardinals was 25, he worked in the bakery department of a grocery store called The Fresh Market.

“Oh!” his close friend Marc Rosenbalm said. “It was the ugliest thing you’d ever seen!”

We know the story of one of St. Louis’ greatest athletes, Kurt Warner, working after college at Hy-Vee.

Well, here’s the amazing story of Cards skipper Shildt, his first head-coaching job — and what it can teach us about the manager and the man.

After playing for UNC Asheville, Shildt coached there for two years. But by spring of 1994, he was in the market for a new coaching job — and in the meantime, at the market.

Over at West Charlotte High School, baseball coach Gary Weart ran an organization called SAVE, but it had nothing to do with baseball. It was Students Against Violence Everywhere. Over the years, eight of Weart’s students died from gun violence. He created SAVE as a way to educate and empower students to prevent gun violence. The organization grew — today, SAVE has merged with Sandy Hook Promise — and by 1994, it became so time-consuming, Weart had to give up his baseball gig. They let him suggest his replacement.

“I was looking for someone who had the same scruples, the same moral compass,” Weart said. “And Mike’s that guy.”

The two had worked together at baseball camps. Shildt had sure made some impression. The athletics director, Debbie Jones, questioned hiring a 25-year-old as the head varsity coach, but with Weart’s word, Shildt was given the job at West Charlotte.

The day before the season began.

“Just an abysmal season that first year he was there,” said Kevin Hill, a sophomore in 1994. “We were not very good.”

West Charlotte High was a football and basketball powerhouse. Baseball hadn’t posted a winning season since 1979.

“The truth of it is, there was quite a bit of talent,” said Hill, now 40. “Some of it was hidden, a lot of it was young, there was just no system and discipline. And so, nobody expects you to win — and I think we played that way.”

But there was something about this new coach. Practices were more structured, more intense. The way he cared about the players was genuine. After the 3-17 season, he met with the younger players in the locker room.

“He looked at us and said: ‘Here’s the deal. We’re going to have a winning season next year,’” recalled Hill. “And we’re going to compete for the conference championship.’ This is what you have to understand about Mike, which separates him from most people on the planet. He has a unique gift. He has the ability to take what he believes in you — and in what you can do — and plant it in your brain. And then he has the ability to make you believe it. He sat with a room of 15- and 16-year-old kids and said, ‘Here’s what we’re going to do.’”

The outfield fence was terrible. The uniforms were shabby. Little money was coming into the program. And in 1995, he had only 11 players — but they were the right 11 players. They were invested in coach Mike Shildt, because he was invested in them.

“The next thing I know, we’re selling donuts in 95-degree heat (for a fundraiser) and we’re putting up a new outfield fence and we have new uniforms,” Hill said.

“I remember I was there pretty early on in their season, Mike invited me to watch their workout that day,” said Rosenbalm, Shildt’s good friend from when they were in high school. “And it was the most-organized, most-well-run, most productive high school practice that I had ever witnessed. He walked over and said, ‘What did you think?’ And I said, ‘Where did you learn that? I played for the same guys you played for, man!’ And the kids — it’s hard to put into words how they reacted to Mike. How eager they were to work, because they knew he was making them better.”

And in 1996, 48 students tried out for baseball. The maroon-clad Lions of West Charlotte had a winning record. They reached the Southwestern 4A tournament championship game and made the North Carolina 4A playoffs. Shildt and the program had raised $12,000 with ad sales for the game program and other fundraisers.

In the Charlotte Observer in 1996, the writer Langston Wertz Jr. profiled Shildt’s squad: “The story of this team seems almost like a movie, a drama about a team that has never won, trying with all its might to change perceptions about itself and about teenagers in general. … Shildt said when he started coaching there, West Charlotte didn’t charge admission, and fan support consisted of ‘an occasional person walking by on his way to Burger King.’”

In his office at Busch Stadium, after a tough August loss, Shildt detailed another tough loss – the final game in 1996 to Providence High. It was incredible. He rattled off the details. Michael Solly had that good changeup going for Providence. Cedric Chambers homered for West Charlotte, but it was all the offense the team could muster that day.

“He’ll say stuff to me about back when we were playing Legion ball together,” Rosenbalm shared, “and he’ll name the guys! And I’m like, ‘Who are you talking about?’ And he’s like, ‘You know, the pitcher from Post 2-whatever it is, I can’t even remember the post number!’ He’s an amazing guy and an amazing mind.”

After the 1996 season, Shildt was off to UNC Charlotte. In 2003, he was hired as a scout for the St. Louis Cardinals. He still keeps up with numerous players from the West Charlotte team — even dining with some of the guys this past week in Washington.

“I’ve never seen a guy who was more committed,” said Weart, the coach who recommended Shildt for the first gig. “It was his dream, it was his goal. And he has just grown up in the game. The man doesn’t have a life! He eats, drinks, sleeps and lives baseball. But he’s always going to give the credit to his players. I am so happy for him. … Mike has earned everything he has achieved.”

Poll: Where do you think the Cardinals will finish?

With just under three weeks remaining in the 2018 season, the Cardinals are in third place in the National League Central Division but within …

Hochman: Can Cardinals rely on Carlos in the closer role?

This season, Carlos Martinez has been unreliable in many regards. But now, in the autumn, he has the job perhaps most aligned with the notion of reliability.

Hochman: With Ross available, does up-and-down Waino deserve another start?

Wait, so was he good or bad?

Mike Shildt settles in before his first official game as manager on Tuesday, Aug. 28, 2018, against the Pittsburgh Pirates at Busch Stadium in St. Louis. Shildt will get a three-year contract Photo by Christian Gooden, cgooden@post-dispatch.com