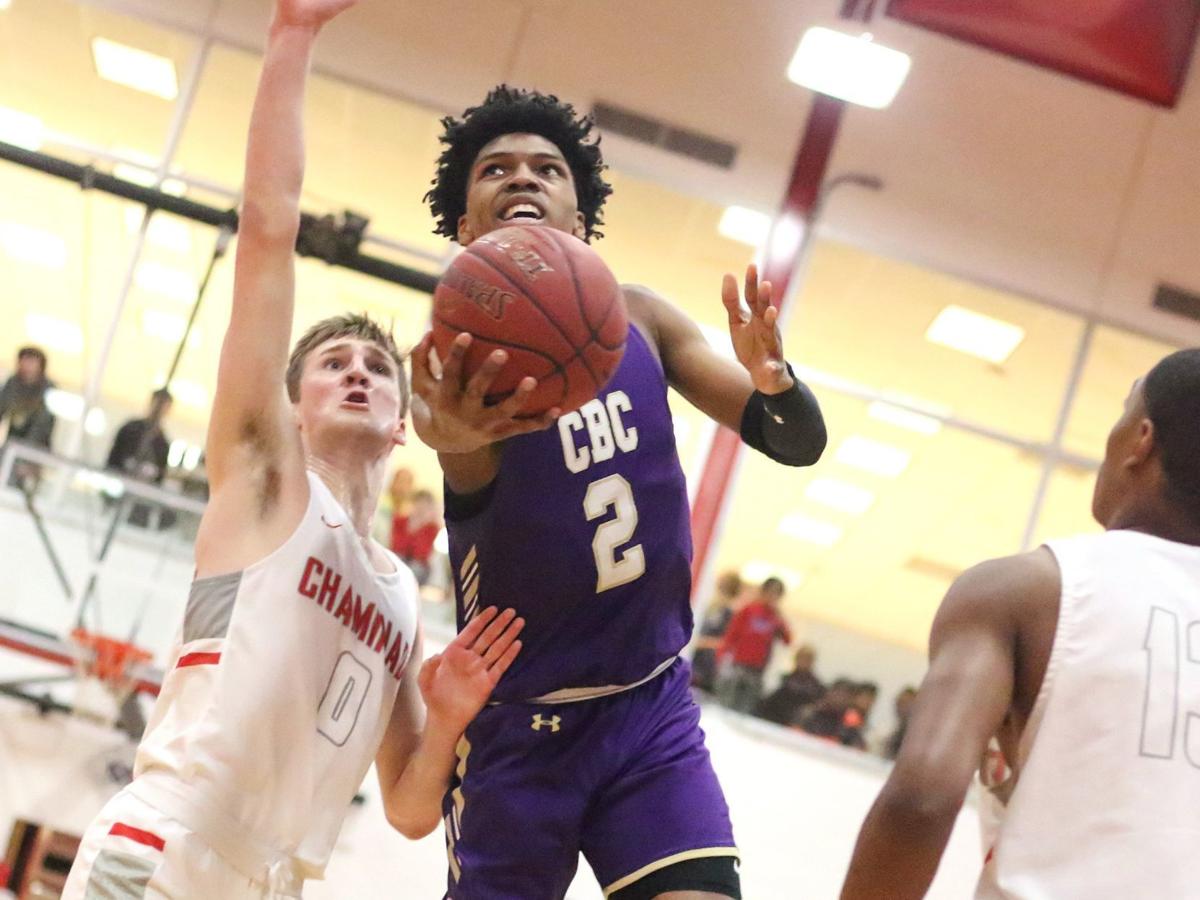 CBC's Caleb Love drives past Chaminade's Luke Kasubke for a scoop shot during a game on Jan. 25, 2019. Love signed a letter of intent with North Carolina on Wednesday, and Kasubke signed with Kansas State. Photo by Paul Kopsky, STLhighschoolsports.com 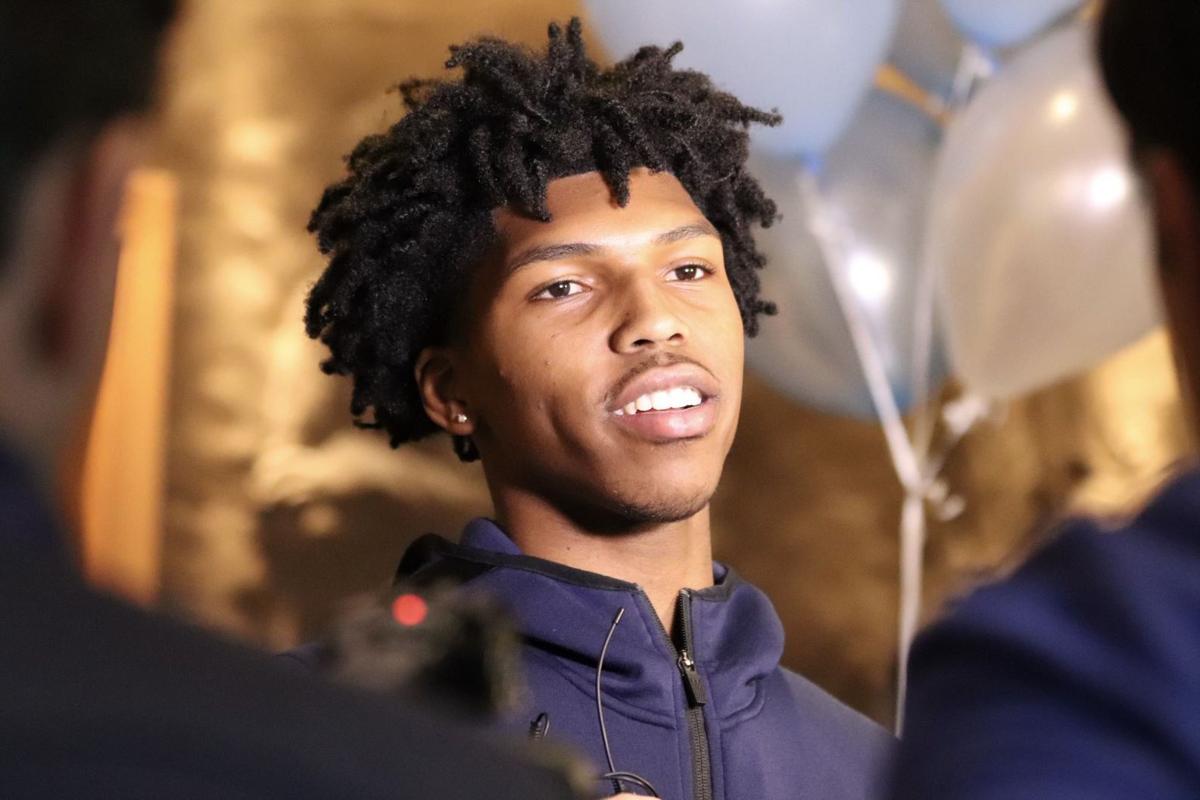 CBC senior basketball star Caleb Love speaks to the media on Wednesday at CBC after signing to play for the University of North Carolina. (Nate Latsch, CBC communications)

He was baptized that day in a sea of Carolina blue.

His father had been a believer his whole life. Even though Dennis Love lived in St. Louis, his team was North Carolina.

And what could be finer — in 2005, St. Louis hosted the Final Four, and the Tar Heels advanced to the title game.

“We were at the game!” Love said Wednesday. “I scalped tickets. We were in the 100 section. I paid a pretty good dollar for those! He was in the seat next to me. It was about the time he was getting into basketball. He was born in 2001, so he doesn’t remember it. But we were there.”

The North Carolina Tar Heels have won the NCAA Tournament six times. Caleb Love was in the building to witness one. And on Wednesday, the Christian Brothers College senior, one of the top high school players in the land, signed to play for North Carolina in hopes to also be there for the seventh time.

“It just means a lot, coming from where I come from, from the bottom-up,” Caleb said Wednesday in front of huge silver mylar balloons of the letters U, N and C. “I believe going to North Carolina, I’ll be pushed on and off the court and it’ll put me in a position to go to the NBA.”

Caleb the Cadet is CBC’s floor general. The 6-foot-3 point guard is a studded five-star stud. Scout.com has him ranked as the No. 4 point guard in this year’s recruiting class, Rivals.com has him at No. 5.

And for a while now, Caleb envisioned himself playing college hoops on Tobacco Road.

Raised in a North Carolina household, Caleb was lured by the Blue Devils.

“And Coach K came here, we thought it was going to happen,” the supportive dad Dennis said of Duke’s Mike Krzyzewski. “And then, it didn’t happen.”

Start your digital subscription for our lowest intro price - only 99 cents for the first month.

How did it not happen? Isn’t Caleb one of the top point guards in the country?

“And Jeremy committed to Duke,” Dennis said. “They were still recruiting him, but Caleb made it clear that he wanted to be a point guard, even though he can play off the ball. So we knew that wasn’t going to work. . . . And he said to me: ‘I need that North Carolina offer.’”

And so, next season, North Carolina’s point guard Caleb Love will go up against Duke point guard Jeremy Roach.

“What can be better than that?” Dennis asked.

It’s funny how things work out. There was Caleb on Wednesday at CBC, leading the room in smiles per minute. Chatting with family and teachers and teammates and classmates, Caleb wore a jacket with the North Carolina logo, and on his feet were a pair of Nikes that came out in August — the Jordan 1 Retro High Obsidan UNC. They are white, black and Carolina blue.

“We’re about to paint the basement Carolina Blue,” Dennis said. “We’re going to really deck it out. It’s his man cave.”

Caleb gushed about the “family culture” at North Carolina, led by the legendary Roy Williams, who coached the Tar Heels to that title in 2005 (and 2009 and 2017). The current director of basketball operations is Sean May, the former NBA center who was the most outstanding player of the 2005 NCAA Tournament.

And sure enough, even Caleb’s current coach knows the Duke-North Carolina rivalry quite well. Justin Tatum’s son, Jayson, starred at Duke for a season before getting taken by the Boston Celtics with the No. 3 pick of the 2017 NBA draft.

“He’s saying Duke is going to beat us when I’m there,” Caleb said. “It’s all fun and games.”

While his players ate some celebratory cake, coach Justin Tatum was asked to describe his point guard for those who haven’t seen Caleb Love play.

“He’s a composed, high-level kid out there,” Justin Tatum said. “He can play multiple positions, he can make big shots and he wants to take big shots. He’s a kid who doesn’t want to lose. He’s going to encourage and challenge his teammates. He just figures out a way. He’s been great to coach and great to watch. I have the closest seat.”

Dennis will be sitting pretty close, too. He was in that coach’s chair back in the elementary days, back when they didn’t realize just how good Caleb would be. Now, they wonder just how good he can be.

It was 14 years ago when they went to their first Carolina game together — first, it seems, of many.

“Being a dad, you just really like all those moments,” Dennis said. “Even now, I like to steal moments with him. And really be that dad for him, so I can say that we hung out. Right now, I’ll take him to Top Golf, because I just want to have moments with him. Because I know in a few months, man, he’s gone. We’ll still have our relationship, but it’s going to be different.”

BenFred Quick Hits: Who's on third for Cards? No concerns about a closer? What's behind Mizzou's collapse?

Plus: Would Cardinals consider Cole Hamels to fill out the rotation? Blues' early success sustainable? Apathy setting in among Tiger fans? SLU…

CBC's Caleb Love drives past Chaminade's Luke Kasubke for a scoop shot during a game on Jan. 25, 2019. Love signed a letter of intent with North Carolina on Wednesday, and Kasubke signed with Kansas State. Photo by Paul Kopsky, STLhighschoolsports.com

CBC senior basketball star Caleb Love speaks to the media on Wednesday at CBC after signing to play for the University of North Carolina. (Nate Latsch, CBC communications)