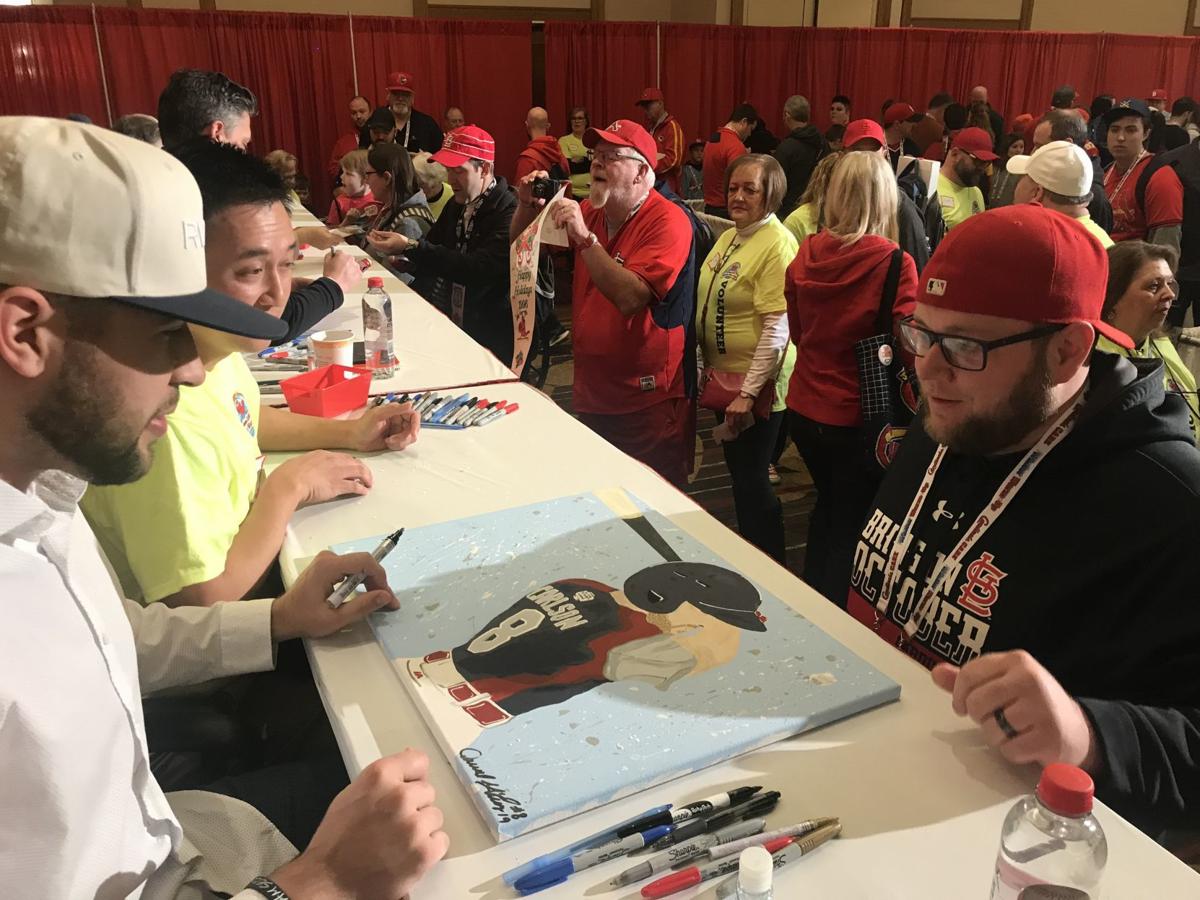 Cardinals prospect Dylan Carlson admires artwork of himself, painted by the fan he met at Winter Warm-Up. (Photo by Benjamin Hochman) 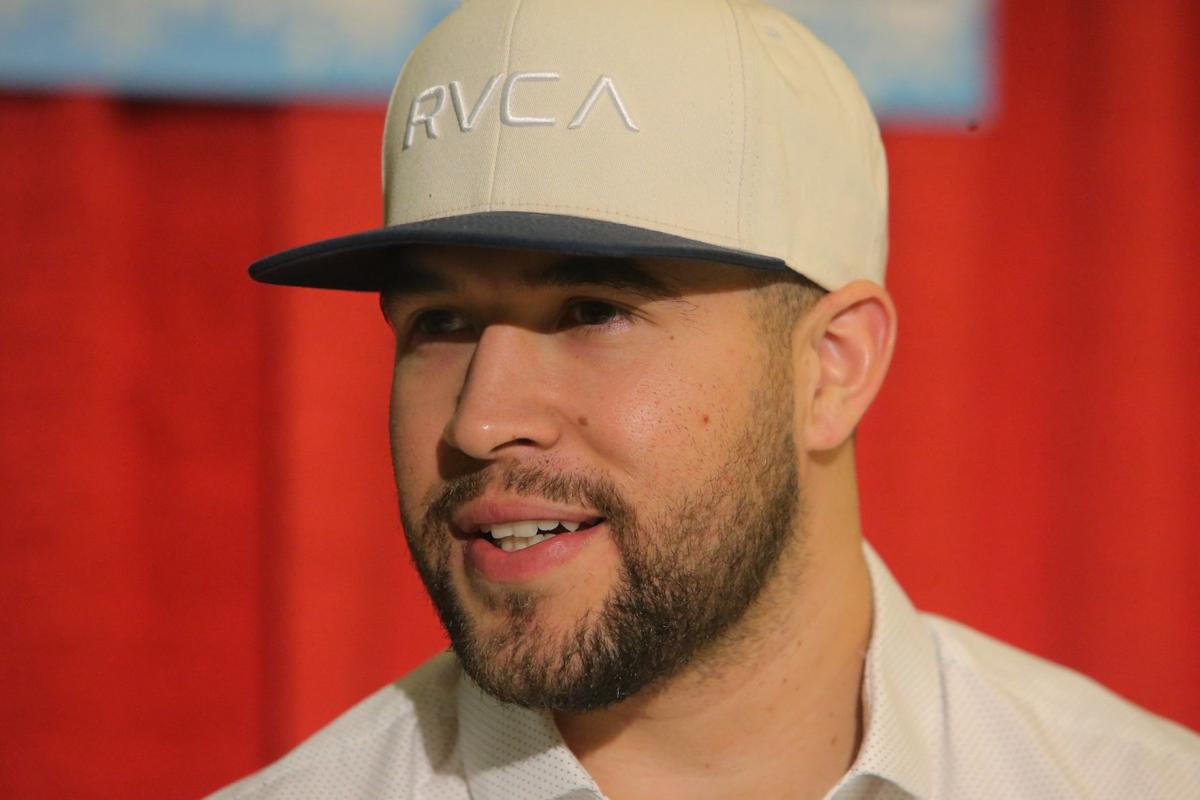 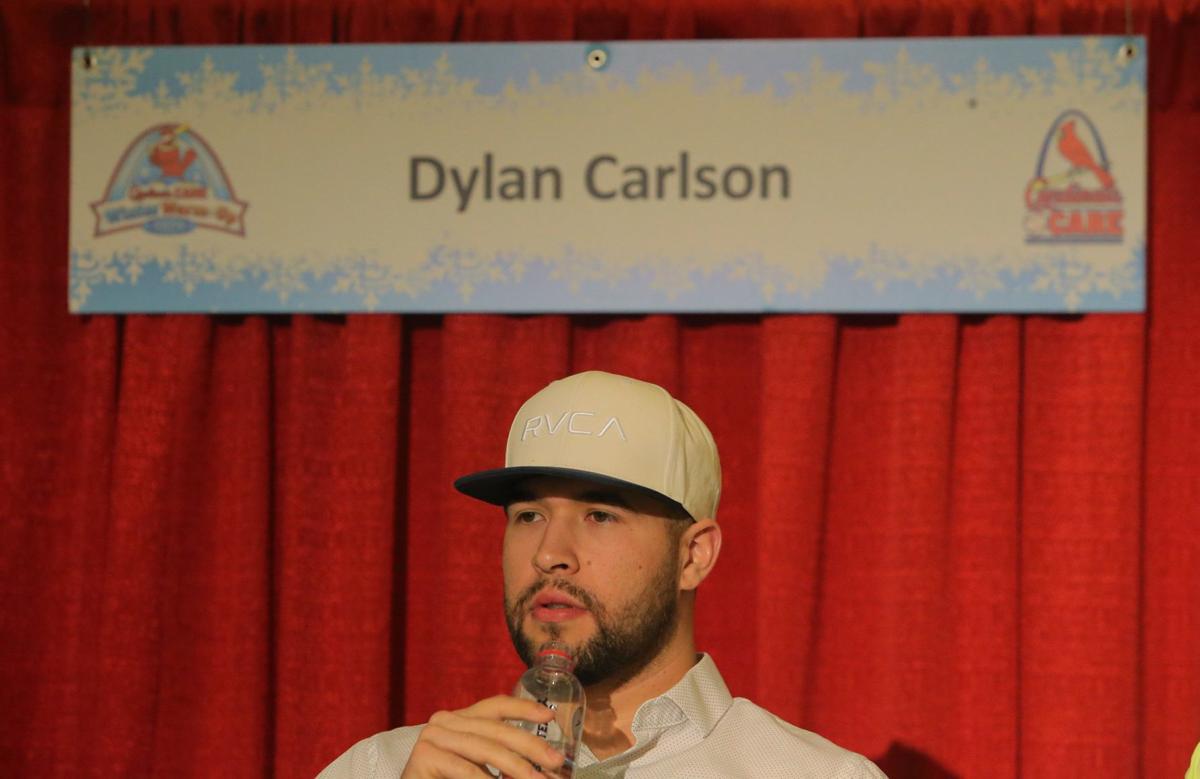 Some arrived with a Sharpie, others wanted a selfie.

Some told him they have him pegged for left field, others for right.

And as he signed balls and bats and even a boy’s cast on his broken arm, Dylan Carlson said quietly from his table at Winter Warm-Up: “Four-hundred people bought a ticket to see me, and I haven’t even played in the Major Leagues.”

Fans asked him if he was ready for the season, and then Carlson asked them the same question. He asked what color pen they’d like him to sign with — and where on the item they’d like him to sign. He high-fived little hands and shook big ones. One man handed him a photo of Paul Goldschmidt — “You sure you want me to sign that?” Carlson politely asked (the man hurriedly scrounged through his stack of photos to find the one of the phenom).

“It was a real honor to be able to see all the fans’ reactions, how excited they were to just see me,” the 21-year-old switch-hitter said. “I just think that’s really cool and something I’ve never experienced. I had a really fun time.”

Writing his name over and over was a rite of passage. It was Carlson’s first Winter Warm-Up, the winter before he’ll likely spend his first summer in St. Louis. He’s the best hitting prospect in the organization since the late Oscar Taveras. In 108 games for the Class AA club, Carlson had an on-base percentage plus slugging percentage of .882. That is splendid. Then, in 18 games in Class AAA, his OPS was 1.098.

On Sunday, manager Mike Shildt said if the Cardinals don’t re-sign left fielder Marcell Ozuna, “We’ve got guys who can compete — and definitely Dylan is one of them.”

The others include Tyler O’Neill and Lane Thomas. Dexter Fowler will start the season in right. Of course, even if Ozuna does return, a case could be made for playing Carlson in center field, instead of Harrison Bader or Thomas. Shildt cautioned: “I can’t rule out the fact that Dylan could be a center fielder, but I haven’t seen him enough to say, yes, he can definitely be an everyday guy at all three positions.”

Last spring, Carlson caught the attention of so many people with his attributes and his attitude. He approached camp with the demeanor of the least-talented prospect, working hard and constantly showcasing his desire to learn. Carlson hung around the batting cage even when he wasn’t hitting, just to watch the approach of the big-leaguers. He cherished lunch with Goldschmidt or film sessions with Matt Carpenter. Oh, but he was also arguably the most-talented hitting prospect.

“For such a young guy, his baseball IQ is through the roof,” said his Memphis teammate Jake Woodford, also in town for Winter Warm-Up. “You know what he can do on the field. For me it was more off-the-field stuff. Conversations about how certain guys were pitching him and what adjustments he felt like he needed to make. He asked me to watch at bats. Just small stuff like that from a young guy that you just appreciate and take note of.”

So, Carlson will be back in big-league camp next month. John Mozeliak, the president of baseball operations, pointed out that the club wants to also give opportunities to “players who are running out of options or are running out of time.” And Mozeliak cautioned that whether Carlson begins 2020 in Memphis or St. Louis will depend mostly on playing time.

“When we were together talking about Taveras, for example, people would ask, ‘Why not just bring him up?’” Mozeliak recalled. “And I would always be like, ‘Well, if he’s going to get six out of seven starts that week, then, of course, but if he’s not, then it really doesn’t make sense.’ And so I think in Dylan’s case, here’s an exciting player. I mean, from a physical standpoint, what he’s able to do, even at his age, is eye-popping. So in terms of trying to put a timeline on what that looks like, I think that’s not really fair to him or to us. But knowing that he’s there? Pretty exciting.”

And that’s why the hundreds of fans flocked on Sunday to meet the ballplayer.

One kid smiled so wide, you wondered if the braces were going to pop right off his teeth.

One fan asked Carlson to sign with his middle name (James), another asked him to sign his favorite Bible verse (Philippians 4:13 — “I can do all things through Christ who strengthens me”). And when one fan asked Carlson to sign a bat with the inscription “future silver slugger,” it made a couple onlookers perk up. On one hand, perhaps that was getting ahead of ourselves. On the other hand, why not have the future star shoot for the stars?

And one fan summed it up by saying: “We’ll see you in St. Louis, man.”

Miller said of the 2018 Indians: "Maybe some of us were naive to how much we needed to work to protect ourselves (from sign-stealing).”

Hochman: Losing Ozuna isn't worst thing for Cards, but can they get more production out of other positions?

Right away, the biggest issue isn't that the Cardinals lost Marcell Ozuna and will replace him with either Tyler O'Neill or Dylan Carlson.

If Marcell Ozuna doesn't return, Carlson and Tyler O'Neill could end up in left field for the Cardinals.

The Cardinals warm up with fans

Martinez remains on target, so far, to be a Cardinals starter again

Righthander will throw his first bullpen session Tuesday in Jupiter. Reyes also prepares to be a starter, as does Helsley.

Hochman: With guidance from Tommy Pham, Cardinals' Harrison Bader is confident about 2020

If he was an NFL player, Bader would be a Pro Bowler. But in baseball, defensive players have to play offense, too.

Slugger knows he needs to cut down on the strikeouts to stay in the lineup this season.

O'Neill says Cardinals' left-field job is his to win

Free-swinger pledges better plate discipline this year. 'I know I can excel in this league,' he says. Injuries limited him to 141 at-bats last season.

Former Cardinals infielder Bill Lyons was invited to Winter Warm-Up for the first time Saturday, and came with a great story.

Behind the scenes at Winter Warm-Up, Cardinals set the stage for season's start

It's not all about autographs. Some players go through physicals and strength tests, others have their injury recovery reviewed. Jupiter is on the horizon.

Spring training begins in less than three weeks (Feb. 12), so the Cards' lineup — which needs a boost — is sure to be a hot topic.

Shildt says: 'Every day, Jack seeks to get better physically, emotionally and mentally. It’s about strengthening the habits and core that he’s built.'

Cardinals prospect Dylan Carlson admires artwork of himself, painted by the fan he met at Winter Warm-Up. (Photo by Benjamin Hochman)