Hochman: I missed this bliss — On returning to Busch Stadium for a Cardinals game
0 comments
Share this
{{featured_button_text}}

It had been 542 days since I was at Busch Stadium for a ballgame.

The last time was Game 2 of the 2019 National League Championship Series.

Two days later, while I was in D.C. for Game 3, my wife and I found out we were having our first baby.

On Thursday, I returned to Busch for the 2021 home opener. And so, between a pair of nine-inning games, there was about nine months of pregnancy … and now we have a nine-month-old daughter.

It is overwhelming to process how much has changed since the last time I was at Busch. My world is different. Our world is different. I’m a father. Still feels weird to say that. And we all endured the pandemic and its reverberations and repercussions.

But returning to the ballpark, everything felt so … familiar. That’s the word. Familiar. It was like I’d been at a ballgame just yesterday. And that’s a beautiful thing, that the ballpark can feel so familiar, so welcoming, so nourishing, so comfortable — like it was sort of just waiting for me all along. Like it was waiting for all of us. And while I returned Thursday to press row — I didn’t feel comfortable going to games in 2020, with the newborn and the unknowns — 13,328 fans returned to the stands. The red sea of seats. Busch in April. We were back.

It was Opening Day, though some fans said it felt like Christmas morning. To me, it felt like Thanksgiving. I just felt so thankful to be back, so grateful for this great game and the experience: the crowd’s roar and the organ music; the green and the brown and the red; the smell of beer hops and hot-dog wafts; the ballpark’s nuances and nooks. Heck, in a way, maybe it was also like Christmas, because I felt a little like Jimmy Stewart, running around the snowy streets in “It’s A Wonderful Life,” while shouting: “Merry Christmas, Emporium! Merry Christmas, you wonderful old Building & Loan! Hey! Merry Christmas, Mr. Potter!” But instead it was, “Happy Opening Day, long lines! Happy Opening Day, you wonderful old $9.50 Bavarian pretzel with cheese! Hey! Happy Opening Day, guy who’s not wearing a mask over his nose!”

Being at the ballpark makes you feel like the richest man in town.

I missed it all.

I missed that feeling of walking under the Highway 40 overpass — it’s so off-putting and noisy and dirty and grimy — and then you cross the street and you’re at this glorious coliseum that is Busch Stadium. The words BUSCH STADIUM across the rounded top of the entrance make it look like the stadium is wearing a crown.

I missed the swirling chaos of standing on the main concourse, people whirring by every which way. Chaos feels cathartic. Fans in masks, but still sipping beers mid-stride. Everyone is wearing something Cardinals-related but not one outfit is alike (like the Christmas Day snowflakes). I missed being in a crowd. I don’t always like being in a crowd, and I definitely feel a little weird being in the crowd during the late innings of a pandemic, but being in a crowd actually felt regular and warm and, yes, familiar.

I missed the exaggerated exuberance of Todd Thomas, the mid-inning guy with the mic who wears uniform No. 1 that says THAT ONE GUY. And I missed the actual No. 1, “The Wizard,” Ozzie Smith, who arrived in his red jacket with the other Cardinals Hall of Famers. Normally, the pregame ceremony takes place at home plate. This year, it took place in dead-center on the flat ground above “Freese’s Lawn,” where the David Freese Game 6 homer landed. I happened to be in the bleachers pregame, and it was surreal to look to my left and see fans flocking to the railing and hailing Ozzie — it was as if the Hall of Famers were just hanging out in the cheap seats.

I missed batting practice and the intense focus of the batting practice pitcher and wondering what the guys are talking about while shagging batting practice flies. I missed the voices of Mike Shannon and John Rooney floating through the stadium — it’s like hearing from old friends. I missed seeing the fans with gloves and my internal argument of: “Is that guy too old to bring a glove at the game?” But then giving some grace because, not only have none of us been able to come to the game for quite a while, but because of the limited attendance, there’s a better chance for this fellow to actually catch a foul ball.

And I missed taking in baseball. Soaking up baseball. The rhythm of the game. The routes of the outfielders. The rumble of the crowd as a play is made (or, depending on who’s batting, not made).

I missed the grounds crew dragging the infield and the Arch on the outfield. I missed the red-white-and-blue bunting and curtain calls. I thought I was feeling thankful — how about Nolan Arenado? After his homer, he showed as much enthusiasm and pride as the fans showered upon him.

But during the game, I also missed my daughter.

And so, when the homecoming game was over, I happily headed home. 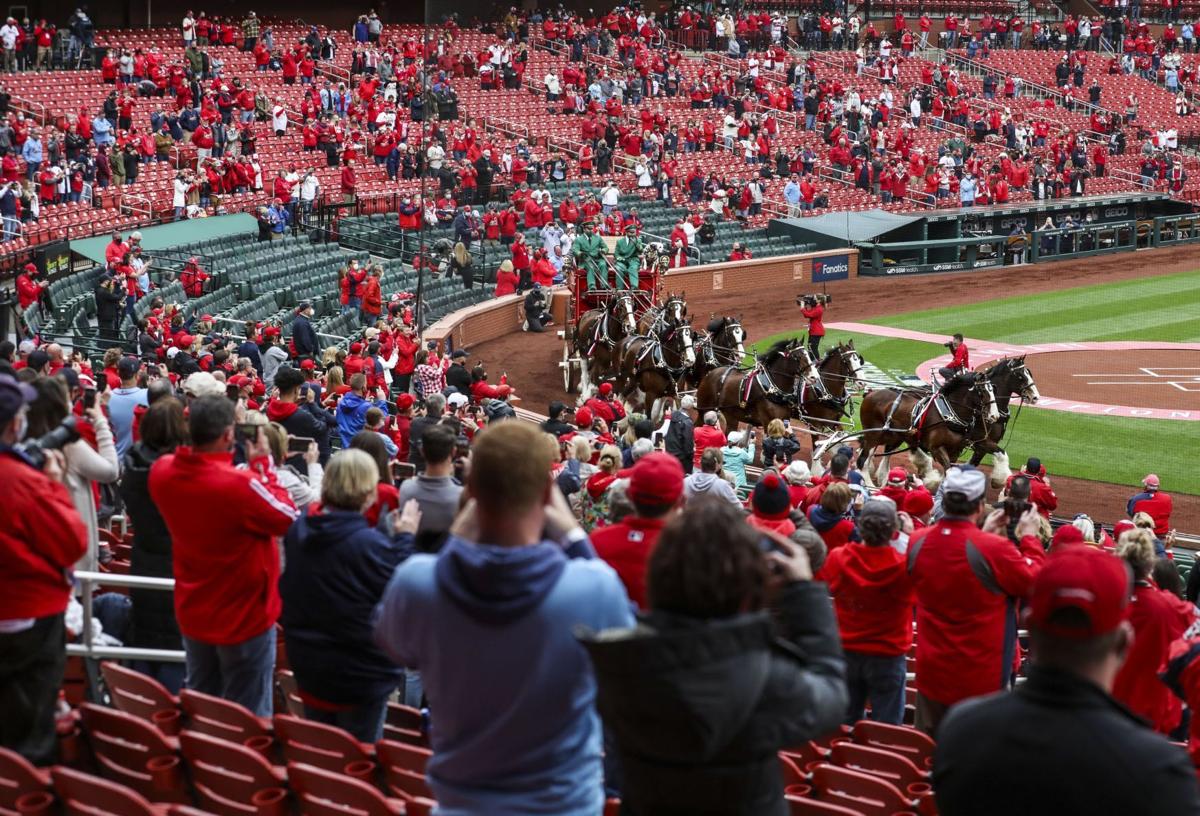 Fans cheer as the Budweiser Clydesdales round the warming track before the start of a baseball game against the Milwaukee Brewers at Busch Stadium in St. Louis on Thursday, Apr. 8, 2021. This is the Cardinals home-opener for the 2021 season. Photo by Colter Peterson, cpeterson@post-dispatch.com 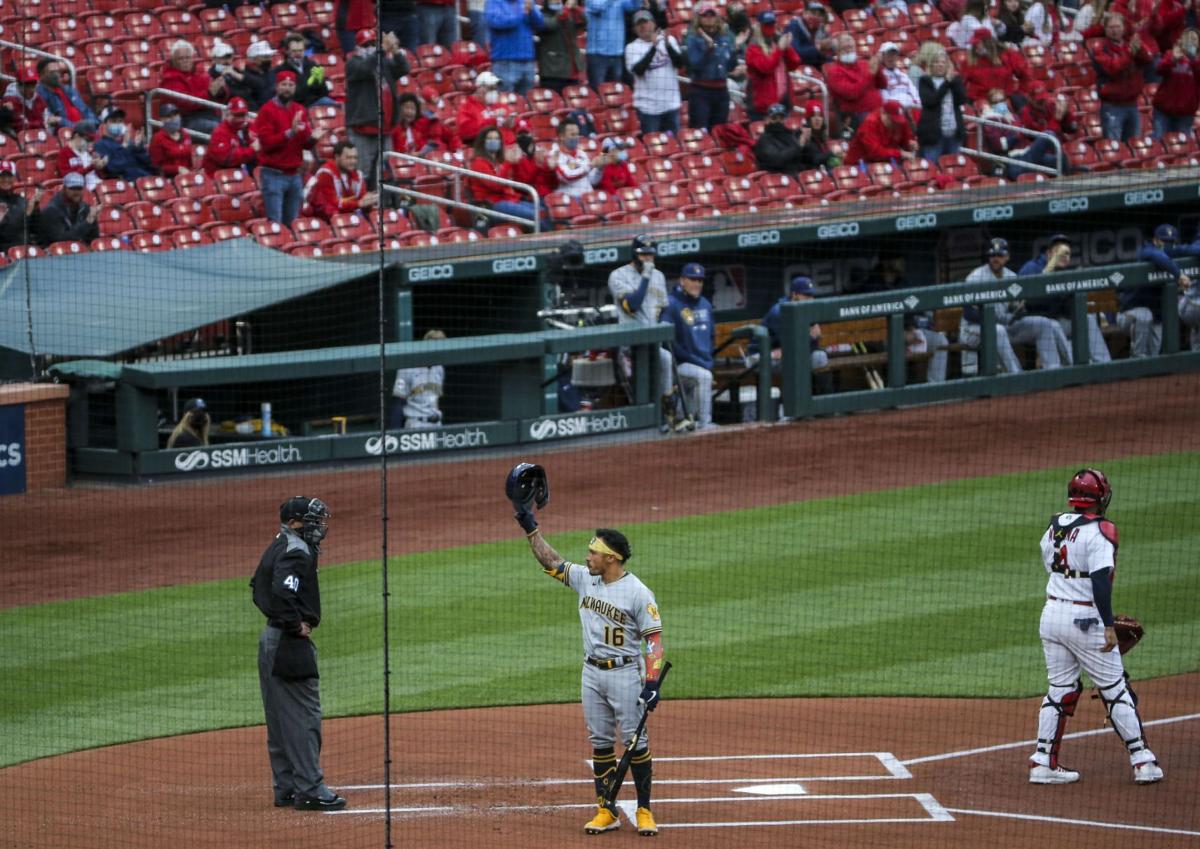 Milwaukee Brewers second baseman Kolten Wong (16) raises his helmet in thanks as Cardinals fans give him a standing ovation on his first at bat during the first inning of a baseball game against the Milwaukee Brewers at Busch Stadium in St. Louis on Thursday, Apr. 8, 2021. Photo by Colter Peterson